Two posts in one morning! Almost caught up!

When initially planning this day, I was a bit worried there would be too much snow. It involved going on a lot of trails to check out some interesting sites. Fortunately there weren’t the deep drifts we encountered at the lodge! Unfortunately everything was solid ice. I basically dragged my feet and scooted my way around most of the ground.

Our first stop was Benson Park in Hudson, NH. Before it was a children’s playground with walking trails, it was a zoo. It ran from 1924 to 1987. The only thing left standing was the old gorilla house which shows how far zoos have come. While I’m making a silly monkey pose, I was sad by how small and depressing the cage was. The sleeping area behind me was essentially a solitary confinement cell you would see on a prison movie. I’m glad it’s not longer used but I’m also glad it gave me the opportunity to amuse Dr. Jen with my ape walk. 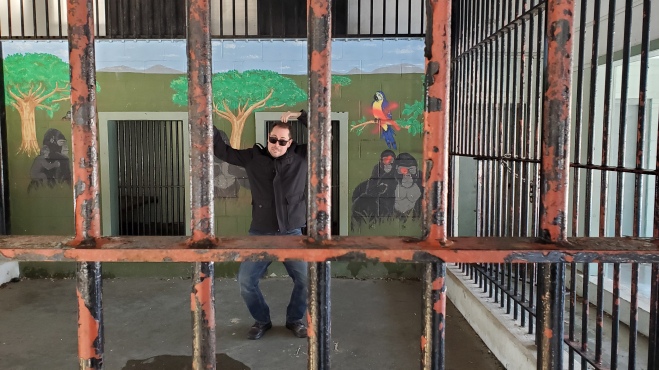 The next part of our journey was perilous. We parked on the side of a windy back road with large trucks flying down it. I couldn’t find the initial trail because everything was covered so I cut through private property. Oops. Jen was pretty mad about me doing that but she followed anyway. I used Google maps to actually track down the site which surprisingly worked! In the middle of the forest is Frog Rock! I’m sure you can see where it got it’s name. I’ve kissed a lot of rocks to finally find my frog. 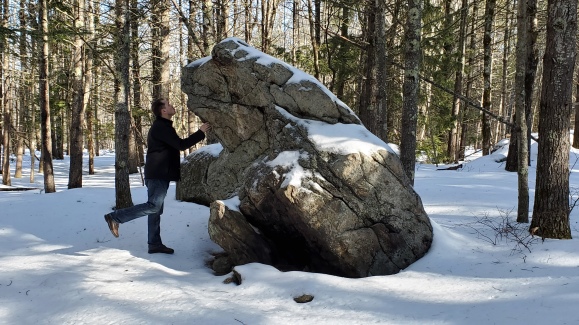 We found and took the correct path back. It was a bit stressful walking the main road back to our car but we were able to jump into the snow to dodge traffic as it passed. I did see this house along the road and thanked the stars that they didn’t see us on private property! That van? Totally creepy. The two rusted out trailers? Yep, someone is dead in there. 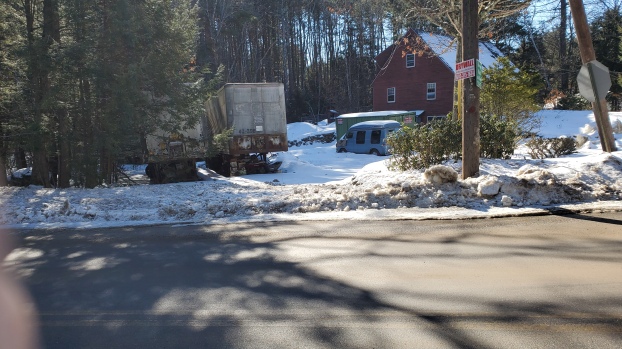 Speaking of dead, off to another cemetery! This poor man was shot in a hunting accident. While the fact that it says that is interesting, it’s actually what’s behind the grave that I came to see.

His beloved dog is memorialized behind him, constantly watching over and protecting the hunter. If was going to be buried, I would want my dogs around me. I want to have a green burial though, specifically where they put you in a bag with mushrooms and you feed them and help them grow. Above I want a plaque that reads “Here rests The Yuppie Hobo. He was a fungi.” No joke. And I don’t want my real name on the plaque. Make it happen.

While we’re talking about dogs, I want to mention the mutiny that’s going on at home. Some people are very upset that I named the Alpha Male Teslin as the most handsome dog I’ve ever seen. I stand by it. He was majestic and rugged. If he was a person he would be Tom Selleck in his prime. People are feeding lies to Reynold the Wonder Mutt back home, saying I like other dogs better. Renny is handsome to an extent, but I would call him more adorable. He’s a goof. He doesn’t live and work in snow storms. He eats the snow and chases snowballs. I love him more than any  dog and when I get home, I’m reversing the brainwashing!

As we drove to the next town, Dr. J started tapping her leg and said she needed a bathroom. I pulled into a small library because I loved the fact that they were loaning out sleds! Especially penguin sleds! Once inside I started looking around, pretending we weren’t just there to pee. The head librarian saw me looking at an old sign and started telling me more about the place. Within minutes she had me in front of multiple diagrams showing me where and how they are expanding. Libraries are becoming a bit outdated when it comes to just getting books. Instead they’re becoming almost internet cafes with free meeting space. The new library is going to focus on meeting those needs and become a community center with books. The plan was ambitious and I’m excited for them.

Next stop: disappointment. A “swinging bridge?” Nope. I braved all of that ice and climbed out to a completely stable bridge. No movement at all. Weak, friends. 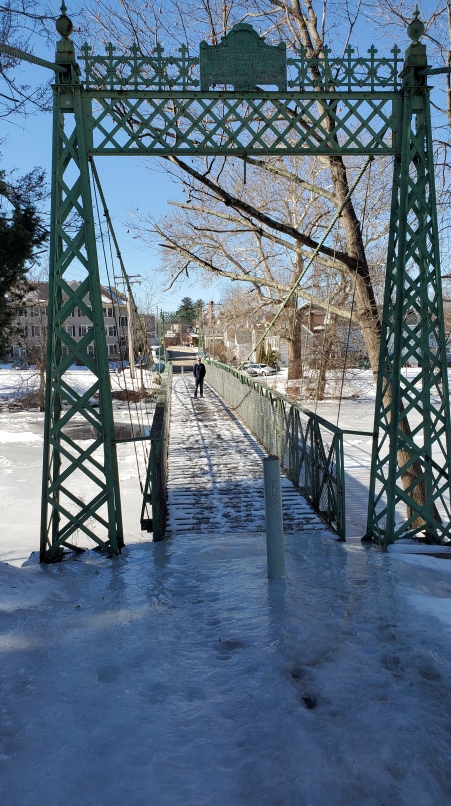 Since we were way ahead of schedule we stopped into Papa Joe’s Humble Kitchen for too much food. We ordered burgers, fries, and a small fried pickles. We had no idea the amount of food that would be. I mean, I knew I was getting into trouble with the burger I ordered, but that pickle order was huge for a small. I ordered the Spartan, named after the local team, which is half price for student athletes. It consists of a patty, BBQ sauce, hot dog, onion rings, bacon, lettuce, cheese. Way too many calories.

Sadly I had my first run-in with a Covid jerk. Jen and I are boosted but still wear our masks because we believe in science and keeping others healthy. As we walked towards the door some guy in a work van started hacking really loud and exaggerated. I whispered to Jen that I thought it was for our benefit when I heard the guy mention Delaware to his friend. Obviously he saw our license plate and decided to act like an ass. At least it’s been this long since I’ve run into someone who acts jerky towards people trying to keep him safe.

I wasn’t particularly excited about the next stop. It was a sculpture walk near an art museum and the sculptures didn’t really strike me as interesting. When I looked up the place, I thought it was just a small path like the river walk where we saw “mini-Lincoln.” It’s actually a large trail system in the park with 60 some sculptures. Being that it was very hilly and everything was ice coated, we decided to move on. How much can you sue a museum for anyway? 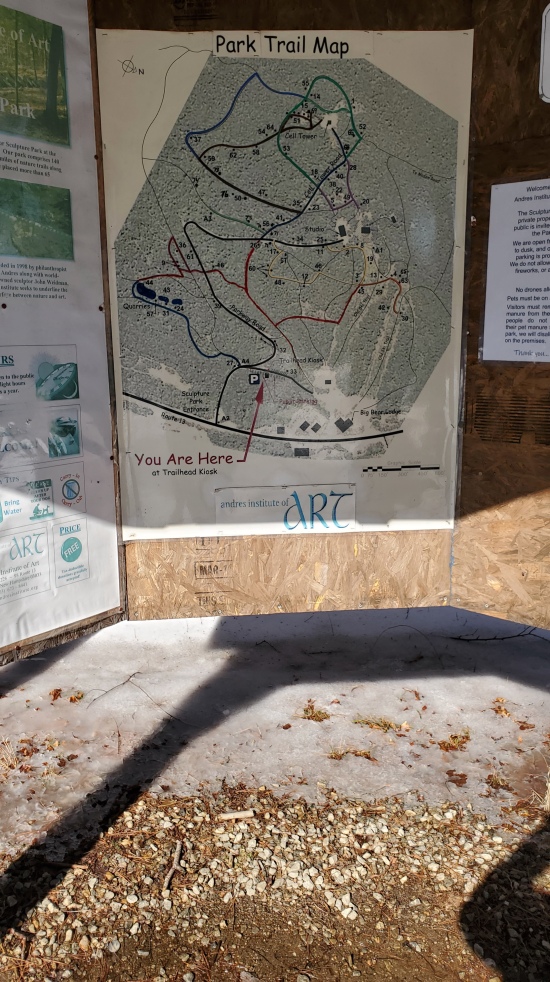 Now we had a lot of time on our hands before our final stop so we drove into Massachusetts. Jen pulled out her phone and did some sleuthing and discovered Pony Shack Cider which had a tasting room just down the way. We had no idea how great this experience would be. First, I’ll admit I don’t like cider so we almost skipped it. Second, I’ll admit I was wrong. Their Bliss cider was really good! As a non-cider person, that should mean something. Go find some! Now! I’ll wait.

Nate the Great is the owner, creator, and nice guy who gave us samples. He left the financial field several years ago to risk building what was originally a hobby in his garage. He started doing great and moved into an official work space, bought his own canners, and really did well with distributors. But like all good stories, there has to be a trial for the hero. Covid hit and Nate’s business was greatly affected. He’s doing a great job at recovering but it’s going slow. Again, go out and find the cider!

Nate, J, and I had a long conversation. I think we were there for around 2 hours. It started with his business but by the end we were all sharing personal details having a fun but meaningful talk. This is what small businesses should/could be. He has a great product and passionate about both the work and the customer. I felt like I made a friend that day and he’s won my loyalty! What a fantastic man! We discussed him doing a hike on the Vermont Long Trail and turning it into a publicity event.

Nate, if you’re reading this I’ve been brainstorming and will send you ideas! #FollowYourBliss.

And then onto more dead folk. Jen and I popped into Berlin, MA to see Don Feathersone’s grave. What a perfect name for the grave of the man who invented the pink flamingo. Not the bird, don’t be silly, the lawn ornament. The other side of the stone listed his family and also had a few more little flamingos.

Our last stop and one of the greatest on the trip. Jen was really excited to see her friend, Jonelle. They have been friends since kindergarten! Who has close friends for that long? We’re talking like 34 years of love! I was both eager and nervous to meet someone Dr. J talks about so much. What if she hated me? That could push me out of the picture!

Their daughter is the definition of precocious. I know nothing about children so I assumed she was just a normal kid but then they started filling me in. She’s already skipped a grade. She showed Jen and I several of her classmates school projects and then her own. It was like comparing Bill Nye’s show with its production value to me doing a baking soda and vinegar volcano. This girl is way beyond her years and I refuse to play her at any game that involves wits. My self-esteem can’t handle a 9 year old creaming me. Her and Jen also made a fine pizza!

Dagnabbit, I like these people. After this picture, I only have one toothbrush to my name! I have to put it in our Adventure Room at home, so moving forward there will be new gifts to people. I am so glad I got to end the toothbrush tradition on a high note. I hope to see them all soon!

A shout out to our motel from that night. I won’t name it because I’m afraid they’ll find me. It looked great on Expedia. Turns out it was in a dark, industrial park part of town. Everything had stains on it. The bathtub ceiling had what looked like hydrogen peroxide stains, the ceiling tiles were stained from serious leaks, and the chair next to the bed was terrifying. The door scanner to get in to the building was just for show, they taped over the lock so that anyone could just push in. I’ve never seen Jen pack and be so ready, so fast in the morning as that. She just wanted out. I’ve stayed in some scary places but that was probably the worst motel ever! It wasn’t a no-tell motel, it was a try-to-survive-the-night motel.