Oh man, are you getting sick of seeing how I spend my meager salary on frivolous “adventures?” Too bad! You’re in store for more! Contained within this holy text is an adventure you’re taking with me, dear reader.

Earlier I mentioned I believe educational endeavors should be considered adventures. With that idea in mind, I signed up for a history class at the University of Delaware that was to cover military technology and tactics from ancient Greece to modern day. Unfortunately most of the reading was literature. Instead of diving into the Greco-Persian wars, we read a fictional tale about the 300 Spartans (not the comic book at least). Similarly we were to read the novel The Killer Angels for our section on The Civil War. To talk about the Battle of Agincourt he showed us two film versions of the St. Crispin’s day speech from Shakespeare’s Henry V (I was okay with this though since it’s one of my favorites).

To make matters worse, the professor is a Luddite. His slide shows in class were lacking and he explained why writing with pen and paper was better than typing on two occasions. Once the quarantine hit and everything went virtual, I pretty much stopped paying attention. The slides he provided us meant nothing without explanation he didn’t offer. He gave no online lectures or companion videos. I was auditing the class for fun and not doing the work anyway. I continued to do some of the reading but haven’t paid attention to any of his slides or emails since we left campus. I did up the difficulty because making the two months of class during my lunch hours was a big hassle for me. I feel like everyone was only free to meet in my office at the exact time I had class. 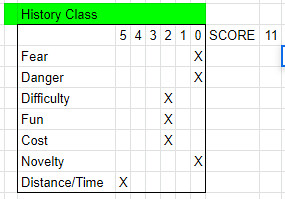 On a positive note, I’m signed up to audit 2 more classes Summer of 2020. All the fun and education with none of the homework or tests. Enjoy this picture of an early 20’s Andrew playing paintball with his friends. It’s probably as much military history as you would get out of the class. 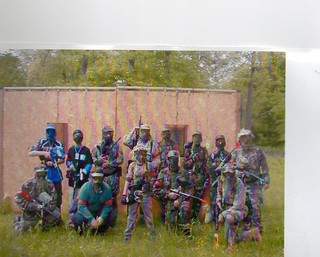 Jen’s big birthday bash was our trip to Lake Placid however, we still had to do something on the actual day! The fact it fell on Fat Tuesday meant that it had to involve lots of bad food. We both took the day off of work and set out for food and fun! Our first stop was for a Fat Tuesday donut. We washed that down with a Fat Tuesday cupcake. If your cupcake had candy inside it, you got a coupon for a free cupcake at a later date. The birthday gods smiled on Jen and she got a free cupcake!

We had dessert first and still needed to head out for lunch. We got to Pizza Brain, the pizza museum of Philadelphia, just in time for them to open. The decor was awesome with all sorts of random posters and toys. There was an entire wall of LPs and cassettes with pizza themed music. 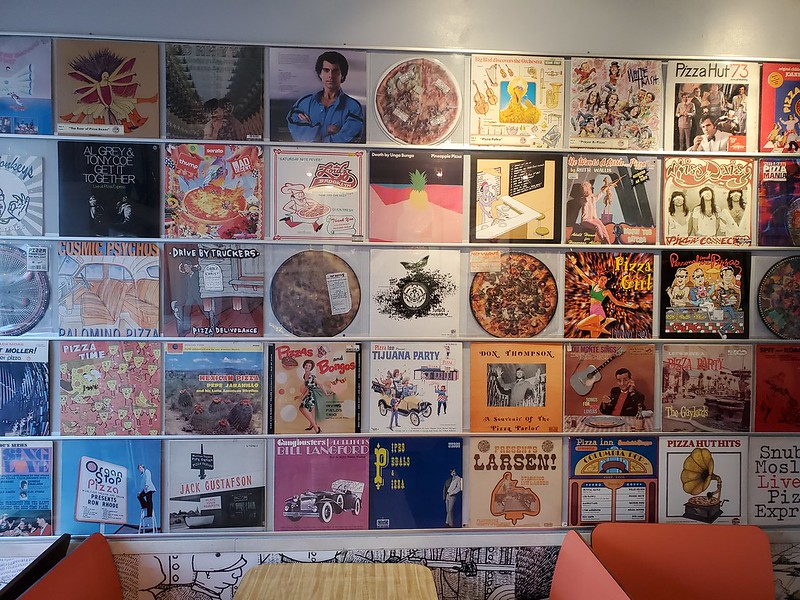 This was one of my favorite items. It’s so weird that the show would have a pizza box advertisement but it’s also weird that they felt the need to adorn their wall with it. I approve. 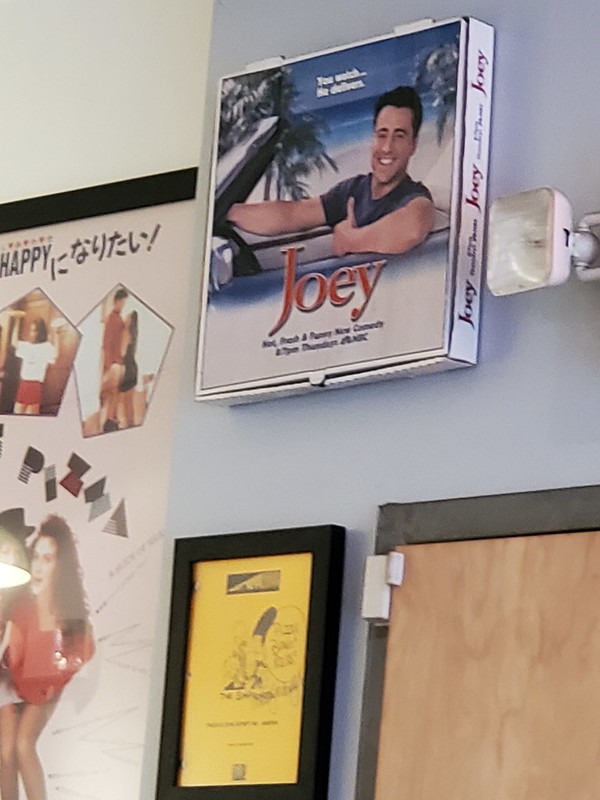 The slices were huge and fantastic. Sadly Jen grabbed what she thought was the oregano but turned out to be hot pepper. She was a champ and ate almost all of it. I took one bite of hers and my eyes started to water. We need to return so she can actually taste the pizza. 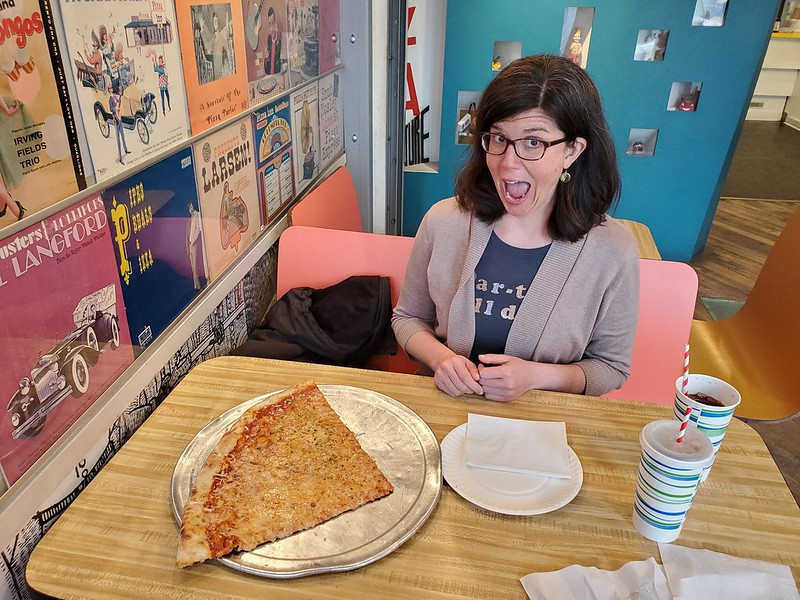 After lunch we headed to the Eastern State Penitentiary for a self-guided tour. I had been to the prison three other times but always for their Terror Behind the Walls haunted attraction at Halloween. The place is interesting, the facts and history they present are interesting,and best of all, the audio tour is narrated by Steve Buscemi. 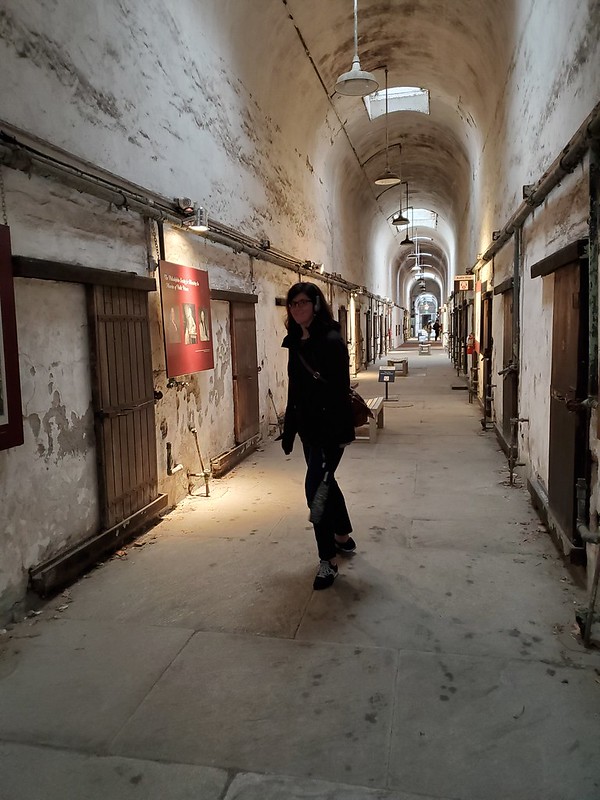 Be careful, Jenny. You’re speeding towards 40 and you’ll have to come up with 40 adventures! 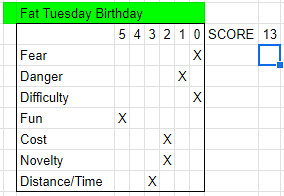 Friends, we’re all on this adventure together. We’re all having different experiences so your rankings might be different than mine. I’m in a safe space, still employed, and not worried about resources yet. It’s still a scary time and unlike anything most of us have ever experienced. I hope you’re safe as well! 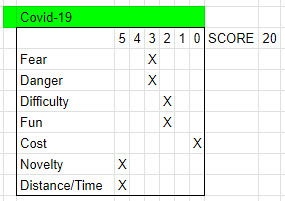 Always look for the positives though. I have a great souvenir to remember my quarantine time. The Great American Toilet Paper Shortage of 2020. 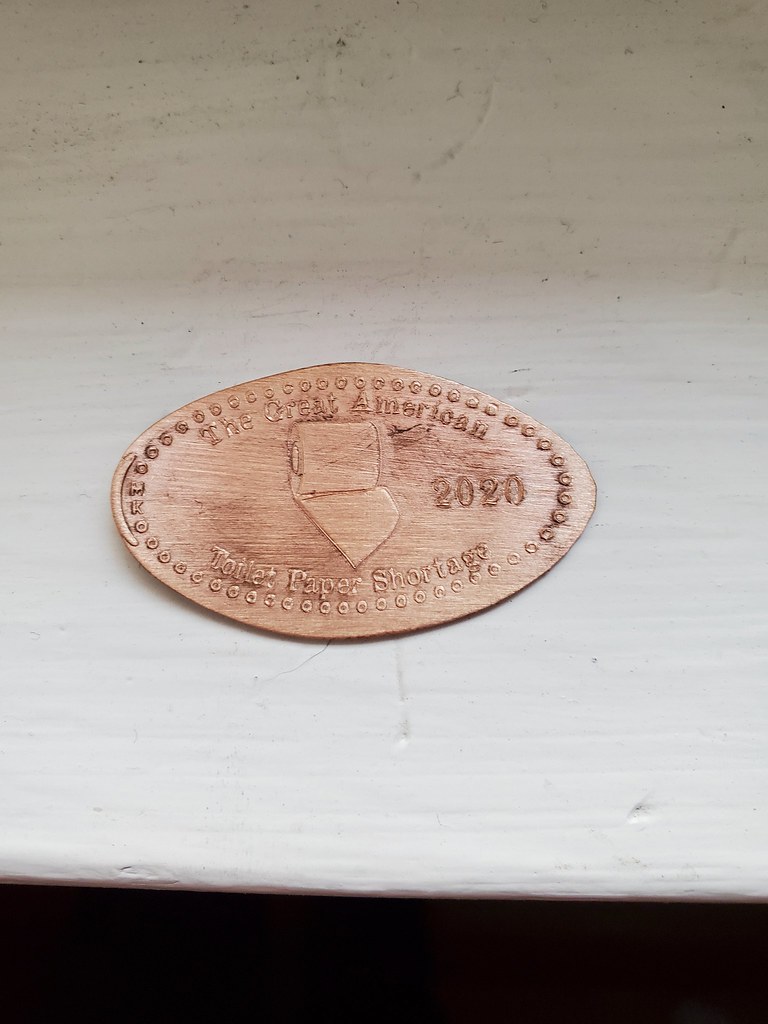 Every year on the Saturday before Easter, Dr. Jen and her siblings do a “Holy Saturday Ice Cream Crawl” where they celebrate the eve of the bunny hiding his eggs by eating their combined weight in ice cream. In a normal year they all travel up to their parents for Easter and pick new as well as past favorite shops to patronize. Obviously Covid put a cramp on that plan. Instead we all scheduled eating times and Zoomed from different rooms in our shelters. For each room we chose a different ice cream or treat just as we would if we were out on the road. Each time photos were posted on Facebook and others were encouraged to join us. Several people did! We started in our respective living/family rooms. 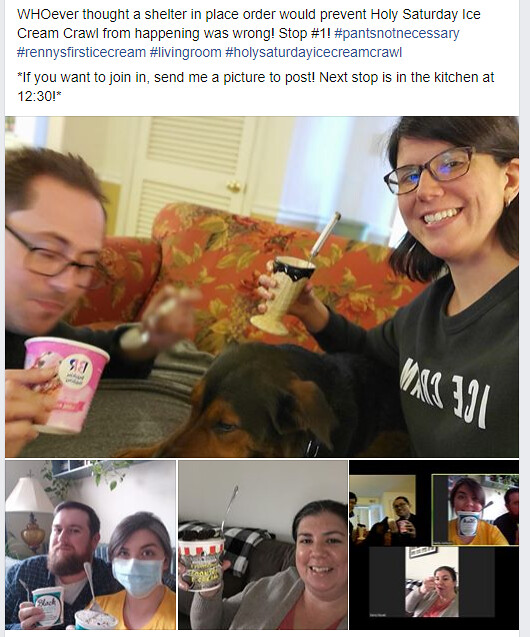 Jen’s not the stereotypical hashtag user but she takes Holy Saturday Ice Cream Crawls seriously and works with her family to come up with the appropriate tags. I’d say they were pretty solid. The second stop for the crawl was the kitchen. We started adding people to the crawl that I didn’t know. Also that Kit Kat novelty was wonderful. 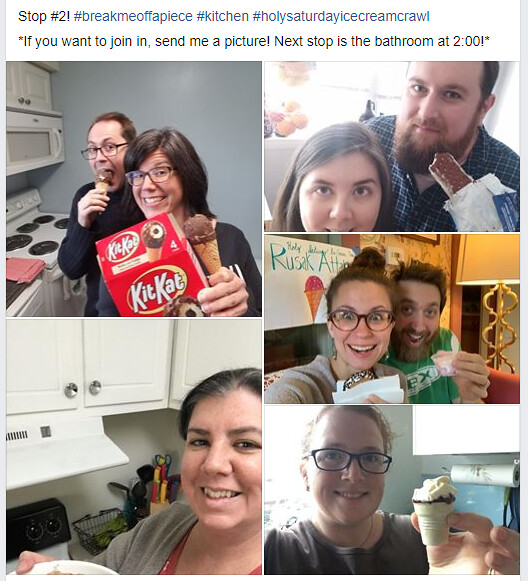 Third stop was the bathroom. Don’t worry, we took precautions to remain hygienic. Can you see me in the photo? 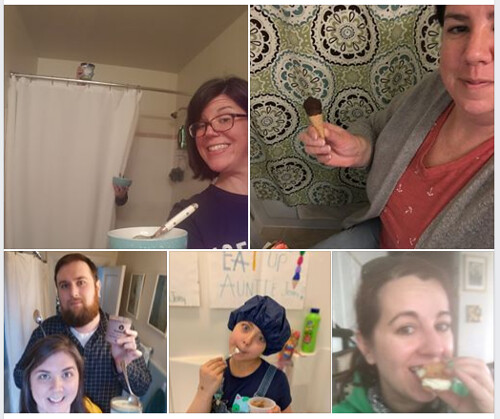 We ventured outside for stop 4. It was a chilly but sunny day. Note we are all still at our homes/apartments. We aren’t those jerks that burn effigies of Ben and Jerry screaming about how the Constitution specifically states I should have the right to get soft serve during plagues. 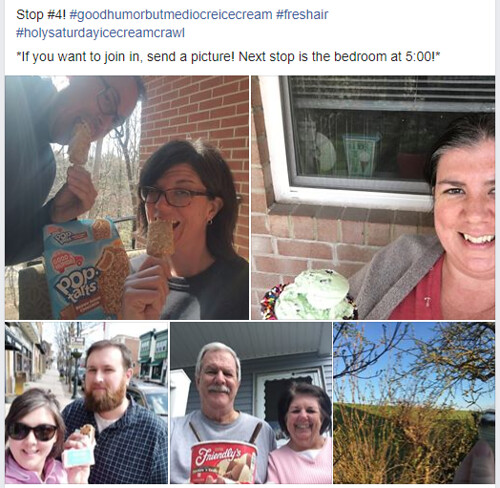 Our 5th stop was the bedroom which was perfect since we all needed a nap. Jen and I finished the day with large banana splits! They were amazing and we did take a nap after it. I love that Jen’s sister got the same ice cream cake that Jen and I had the next day on Easter! 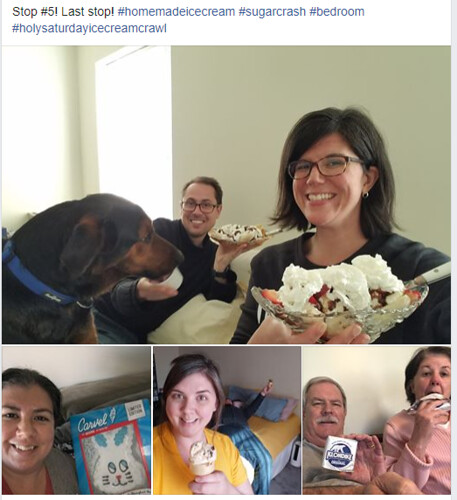 We found out Reynold is a big fan of ice cream, or at least he really likes dog, Frosty Paw ice cream. He inhaled that stuff and was ready to eat the cups when they were empty. Jen was happy, she wasn’t sure she could still be his friend if he didn’t like the ice cream. 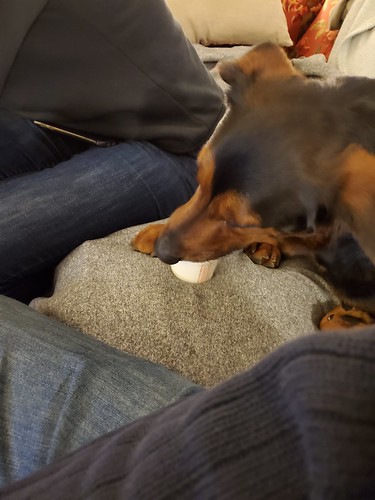 It receives a respectable, small adventure score! Danger should have been higher considering the amount of calories and sugar, but I’ll let it stand. 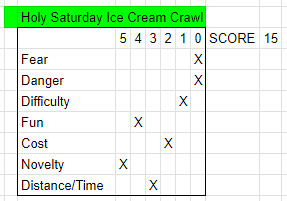 I had planned to patronize Without a Cue as an adventure at some point along the year. They’re a local acting group that provides interactive murder mysteries, similar to what we did at the library for my mom’s birthday. Of course now they are unable to operate in person. Being a clever bunch however, they have made three Zoom mysteries you can do anywhere! I counted this separate from the other mystery for 2 reasons. First this is my blog so I make the rules. The second is the novelty of this being online and being able to bring in all of my quarantined friends. Our first was had a theme of a rich family having a will reading. I swore under pain of death not to give out details but I’ll share the pictures. 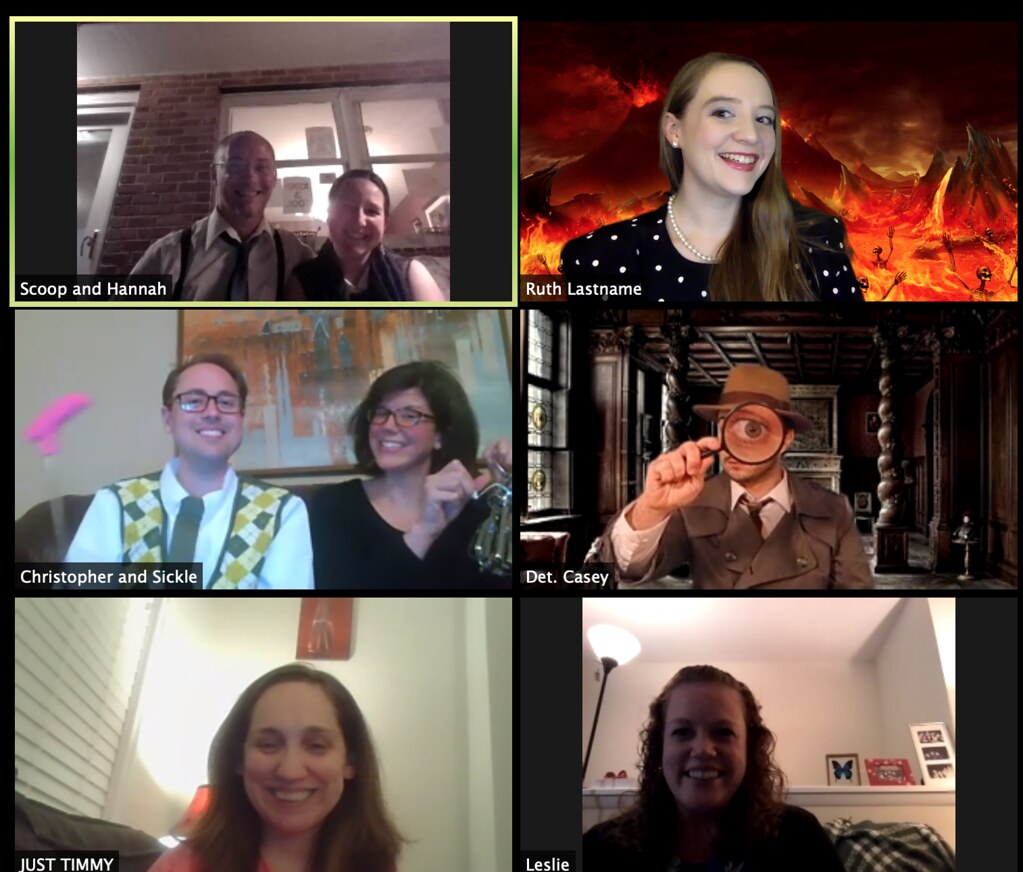 We were told to try and dress for our parts. I was a wealthy nephew so I wore my golf attire and kept asking to hurry up so I could make my tee time. Jen was a chef, so she had a mixer. The person to the right of us and the lady above him were actors. My friend Brandon in the top right was in a suit with a “Press” sign as he was a news reporter. Hard to see but it was awesome. 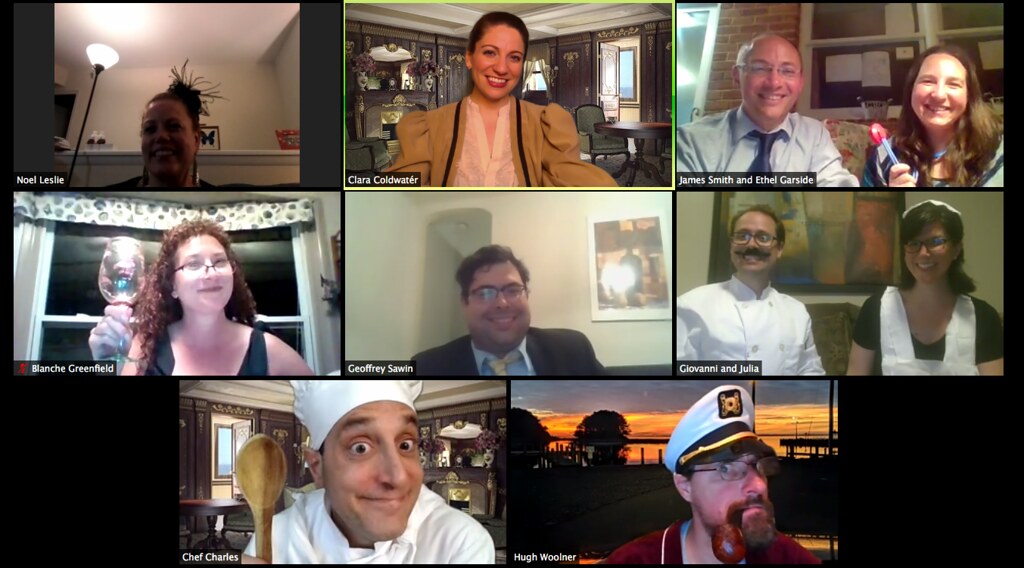 The second mystery was Titanic themed. I was the Italian assistant pastry chef Giovanni, hence my outfit. I also weaved my way in and out of a terrible, Mario inspired Italian accent. At one point I coughed it out and my mustache off. The head chef, in the lower left corner, was my boss (he was an actor, not my real boss from the Pow Wow). The guy on the lower right is a co-worker of mine who is a sea captain! He totally looked the part of a Titanic rich guy. Jen was a maid and used a coffee filter and napkins for her costume. Definitely the best costume of the evening!

Totally great adventure! No matter where you are, you can book one of these events. If you’re in Oklahoma and looking for something to do, check them out. You won’t be sorry! I’m looking forward to our third that they are currently developing. Golden Girls themed! 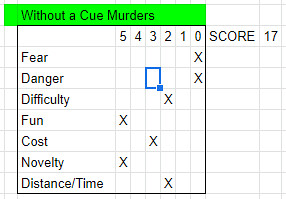 ScavangerHunt.com has set up fun experiences in cities all over the globe. We tried the Wilmington, Delaware hunt and had a pretty good time. They give you roles to play but I actually didn’t see how that factored into anything. Essentially you go around looking at/for landmarks and occasionally uploading a photo of yourself in action. Outside of the Grand Opera House, Jen was tasked with a dance photo. 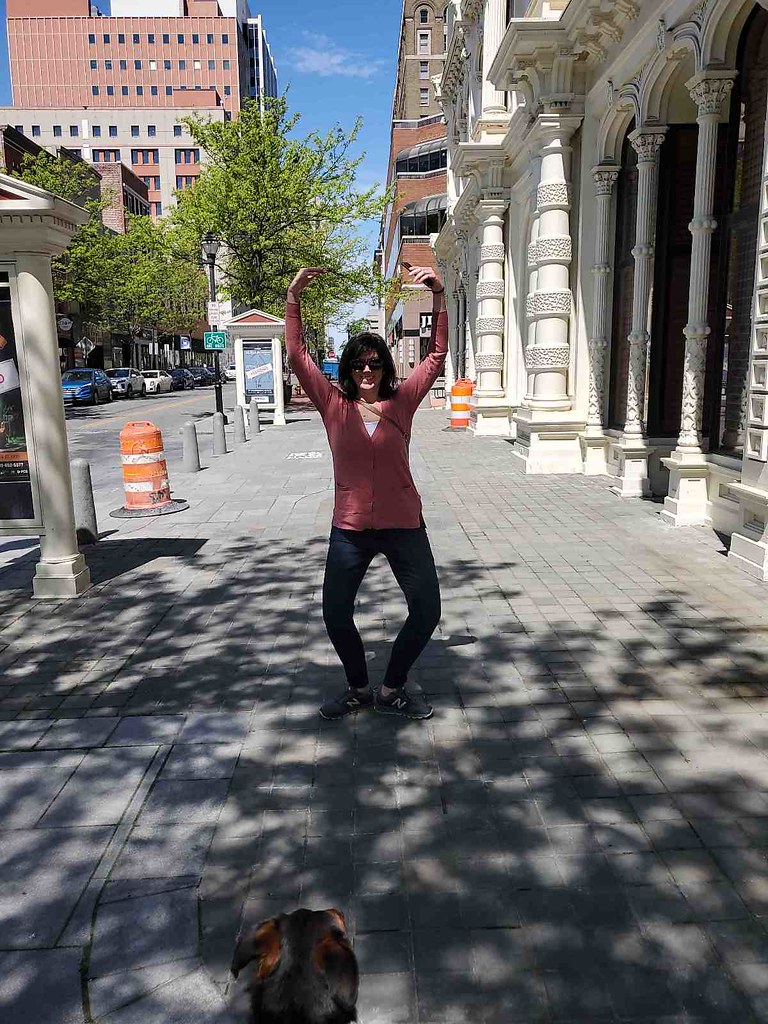 We had some issues getting around town because of construction. We crossed a river, walked a length of it, crossed back, and found the park we were looking for shortly from our starting point. Renny was sick of that and he suggested the below photo when they requested a shot of us “enjoying the park.” 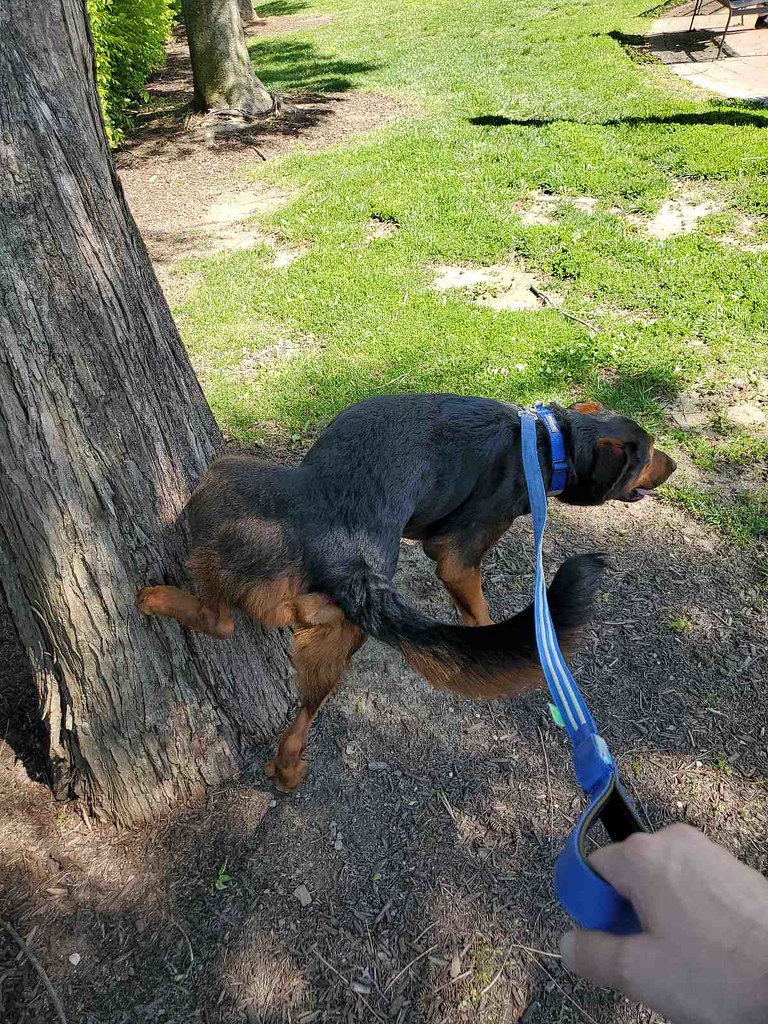 It was a fun activity for a nice day. You have a time limit between your searches that we were constantly going over. Renny is an Olympic sniffer so we spent a lot of time by bushes, trees, and posts waiting for him to finish up. Even so the app told us we did better than 96% of other teams. I would do this again but only with more friends and turned into some kind of drinking game. 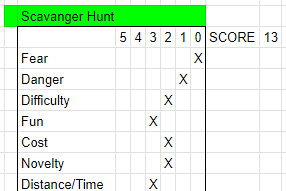