Herein lies the tale of my 40th year. What I mean to say is below are some of the additional 27 adventures I’ve taken to make it up to 40 adventures in a year! If you’ve been following each of my monthly large adventures, you might be disappointed with the size/excitement of these. If that’s the case, move to another blog that has more money and vacation time. That cattle drive tapped me out. These are the small adventures for which I still had some time and money left over.

Coincidentally this first of the small adventures fell on the 40th birthday of one of my favorite people! You might remember Howard from another post and adventure. Although I got three archery horseback lessons, I counted them as 1 big adventure. For my second lesson however, I turned the remainder of the day into my first small adventure of the year. I had planned to go to a drive-in theater that night but while looking for cowboy boots for my cattle drive, I stumbled upon a great 50’s themed diner/mini-golf. I figure all of these throwback activities constituted a theme which then counted as an adventure. Don’t agree? See line at the top about moving to another blog.

After visiting a cowboy boot shop with a very, very pushy store owner, we drove across the street to Nifty Fifty’s for amazing burgers! They also have loads of great sounding shakes but we figured a milkshake before horse riding was not in our best interests.

They boasted the largest soda fountain in the country and had all kinds of weird flavors. Jen first got orange strawberry coke which wasn’t so great. Her second was something like chocolate, cherry cheesecake coke. She liked it but I thought the chocolate was over powering. I got almond cheesecake coke and it was a winner. She kept snitching sips of mine because it was so good! 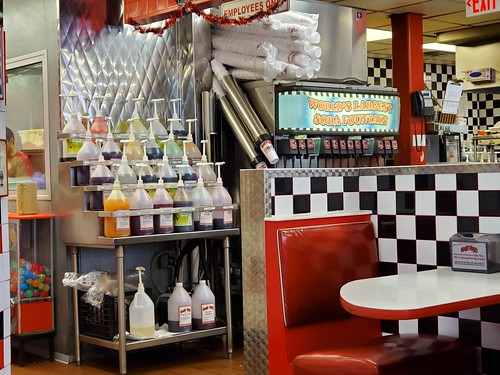 I’m not sure if it’s really the largest soda fountain but I wouldn’t doubt they had more $.50 machines than 99% of diners in the world! They made up the majority of the entrance and then there was another bank outside the bathrooms!

We ended the night with a double feature at the Delsea Drive-In. We ate pizza, popcorn, fries, and grilled cheese while laying in the back of my Jeep watching The Secret Life of Pets 2 and A Dog’s Journey. Neither was particularly great but it was still fun. It sucked to have to drive an hour home after midnight, but whatever. 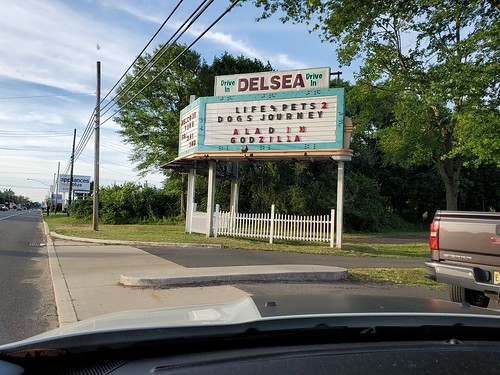 Perhaps the most adventurous part of the day however, was washing my horse Rio. They made sure I lifted his tail and hosed down his backdoor to relieve him of swamp ass. He seemed to like it about as much as I did. We both couldn’t make eye contact for the remainder of my time there. 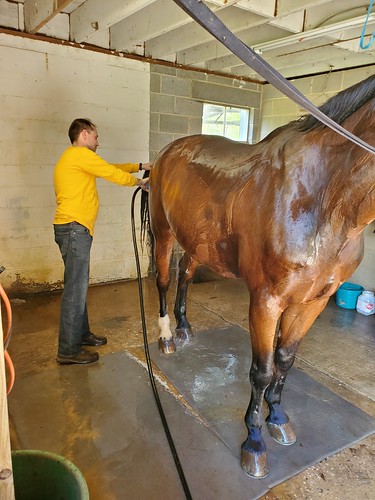 How does this trip rank? 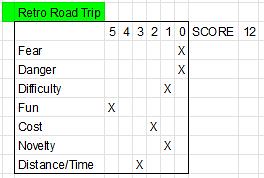 Super fun and took most of the day. Solid adventure!

I took intro and intermediate orienteering lessons at Marsh Creek and Nockamixon State Parks respectively. Essentially it taught me how to navigate with a map, understand topography, and use a compass. It was a great class and both teachers were interesting fellows with military backgrounds. The lessons were offered through LL Bean and I highly recommend trying their activities. They helped us the following weekend on our Vermont challenge. They weren’t cheap and I had to commit most of the day to each lesson, so by the rules of the rubric it counts as an adventure! 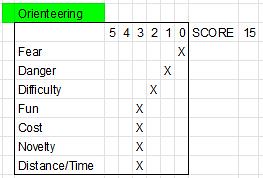 Knoebels is America’s largest, free amusement park (you pay per ride, not entrance) where you will find “fun, food, and fantasy.” I agree with their tag line. I believe I found all of those things plus I spent time with so many friends! Tyler and his wife were visiting from out of country, so we went there to meet his brother and his wife and kids. You might remember these friends from my trip to Europe. Also Dr. J’s friend Ron from Boston happened to be in the area for a wedding and joined us. My niece tagged along and Travis’ in-laws came. We were rollin’ deep with a dozen folks! And we rocked the face off that park. 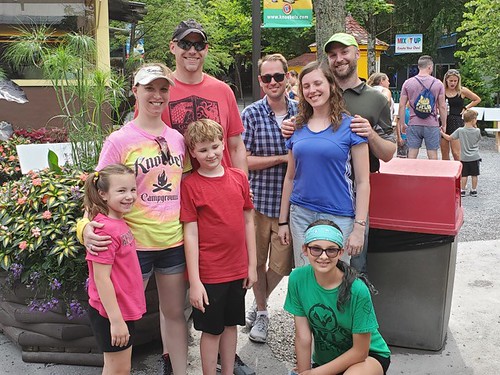 Ha! No one knew but I kept poking Tyler over and over in the ribs which is why he’s leaning away from me. That dope! We also rode the log flume early (second ride) so my hair shall be flat and soggy in all further pictures.

A dinosaur being ridden by a cowboy rodent with Jen and I doing our adventure pose, has there ever been such a perfect picture? 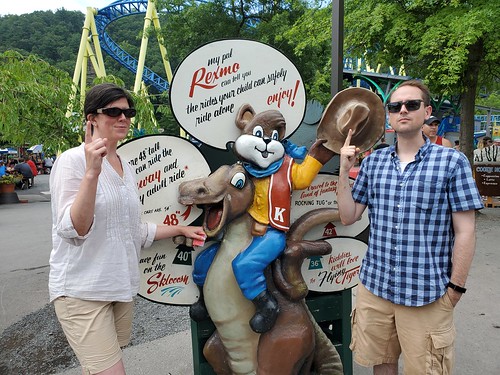 Well maybe the one in which my niece photo bombed me and this hobo looking son-of-a-gun. 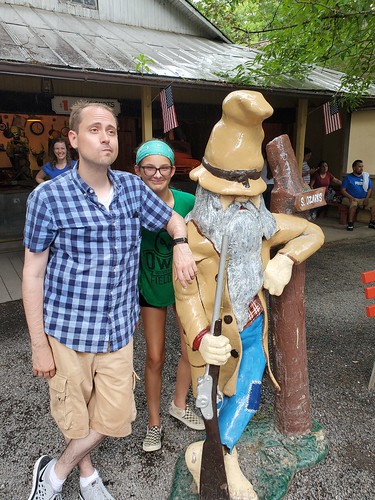 Or this classy picture where I’m the main course… 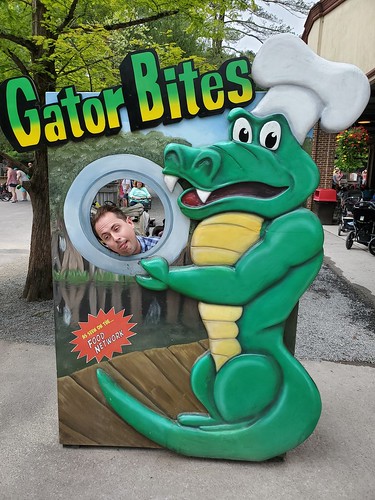 I was a big boy and rode all the adult rides. I chickened out the first time my friends rode The Impulse but went on it their second time. Though there is a straight vertical climb, the rest is pretty tame (below is not my video, I found it on Youtube). My favorite rides were the Haunted Mansion (of course!), The Flying Turns, and the carousel. The Flying Turns is not on tracks, it’s more like a luge than a roller coaster and it was super fun. The carousel is great because if you’re on an outside horse you get to lean off and try to grab metal rings as you go around. If you can get a ring in each of the 10 loops you get the ride for free. I missed 1. I’m weak.

There were penny machines all over the park! There was also a machine with the tokens below. They’re about the size of silver dollars and have quite a heft to them. They’re $5 a piece or $15 for all 4. I think everyone thought I was silly for spending that much money but it’s what I do.

Where does this fall on the adventure scale? According to the rubric, extremely high. This almost counted as a big adventure! 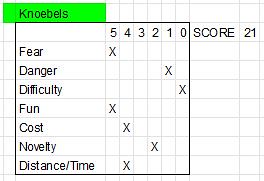 I want to state that cost didn’t have to be as high as I ranked it. You can definitely go to this park and spend less money than at other places. Jen and I paid for our tickets and my nieces. On top of that I let my niece get several souvenirs. By the time I got home, I spent much more than I wanted to. I’m ranking it on my experience, not what could have been. Fear was high because of me psyching myself out for The Impulse and Phoenix.

Go Ape is a chain of zipline and tree-ropes courses. I’ve been to the Lums Pond site twice before and their Virginia site once. For a guy afraid of heights, it can be pretty exciting. The highest platform is 48 feet up and it has several ziplines that shoot over the pond itself. Adventure pose, people! 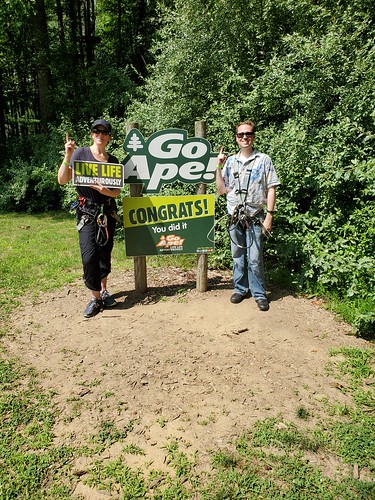 I have yet to eat it on any zipline I’ve done. I always manage to land on my feet. I feel like I’m missing the full experience and eventually just need to relax and not try to land correctly. Fortunately for everyone, Jen was not able to land it once.

And here’s the score card, friends. A solid score for a solid time. Danger could have been higher as someone did die there a year or so ago, but that was their own fault. If you live near a course, try it. I bet you’ll enjoy it. 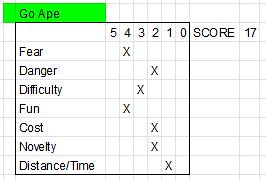 One of my life goals is to see each of Shakespeare’s plays. On July 27th I headed to the Chesapeake Shakespeare Company in Baltimore for my 15th, Love’s Labour’s Lost. On the journey however, Dr. Jen surprised me with a mini-roadtrip involving many of my favorite things: black light mini-golf, monsters, and dinosaurs!!! We had a super tournament in which we each won a game. I had a total of 7 hole-in-ones with 6 of those being in the game I lost. I am seriously inconsistent. My hole-in-ones followed by hole-in-sevens were no match to Jen’s constant 2 stroke game.

Our second game was at Monster mini-golf which has already been featured on this blog, so I won’t get into that. I will however share some photos from Jurassic Golf & Arcade. A tiny little place with much easier holes than Monster mini-golf, it’s loaded with dinosaurs and dinosaur sounds. Obviously I loved it. 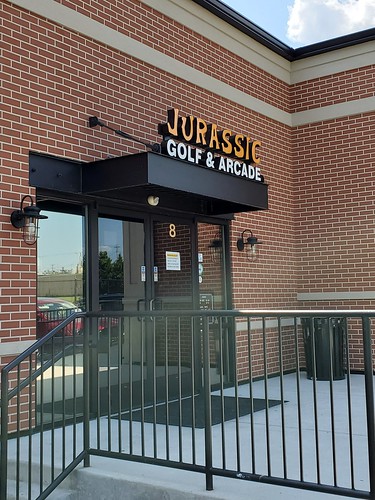 The moment we arrived, Jen was immediately attacked. It was a close one but she got away. 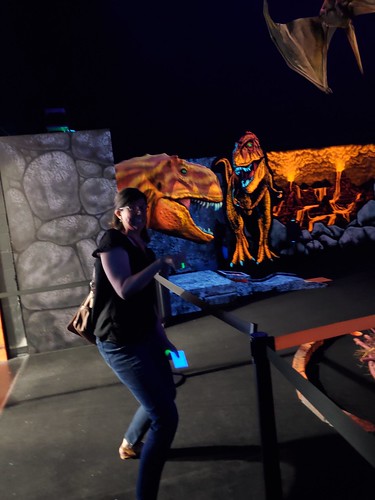 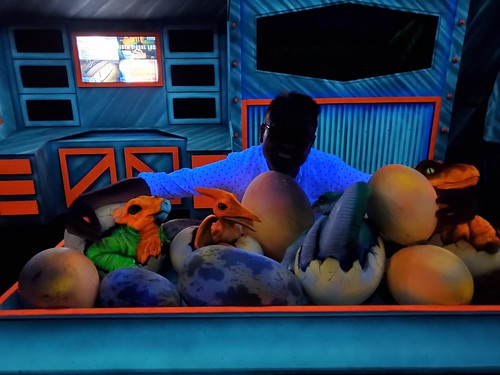 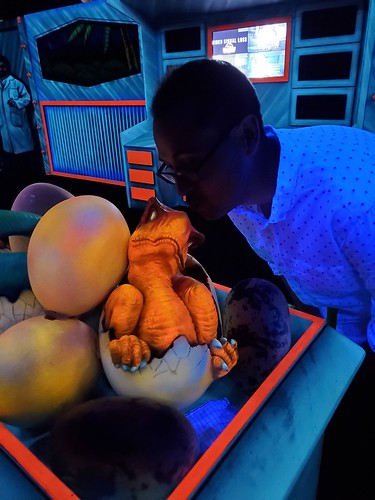 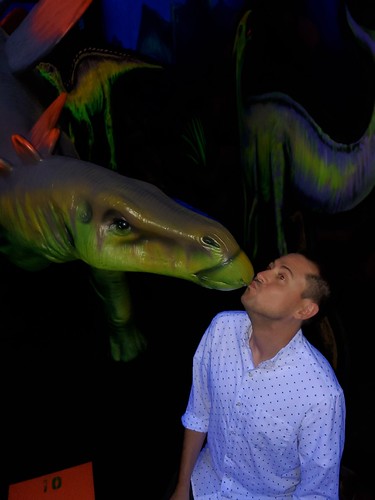 Not all dinosaurs are ready to kiss… 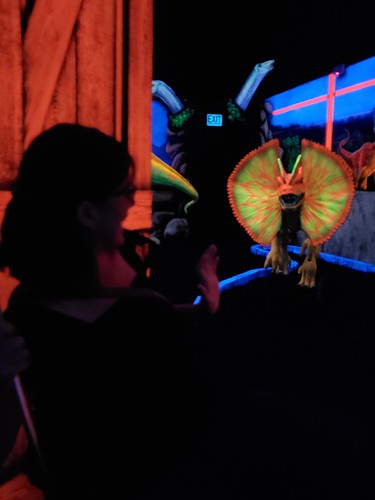 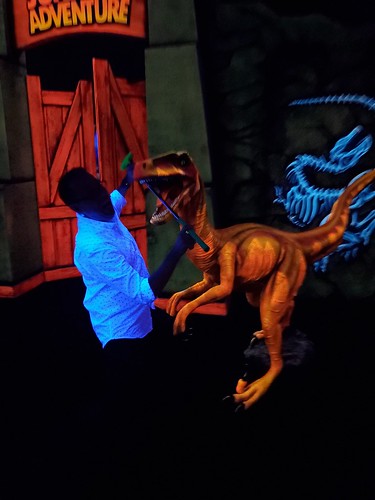 And so what was the adventure score? Man, this adventure just made the cut. We turned it up to 11 so it counts. 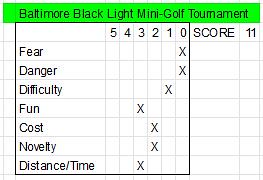