The last big adventure to get my one-a-month! I also only need 2 more to finish up all 40 which is great because adventures are hard to come by under quarantine. I had all kinds of ideas to finish up the year. I had looked into bi-plane rides, spelunking, and even a plan to tour historic carousels along the east coast. Ultimately though, none of these were plausible. But if I can’t go to the adventure, I’ll make the adventure come to me! Dr. Jen and I created an 18 hole, indoor/outdoor mini-golf course. We even dressed for the occasion. 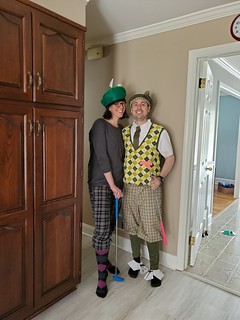 Before we got into the heat of battle, we had to set the ground rules for the course, gather our equipment, and get a score card. I tracked down different websites so I could get our clubs, 18 portable golf holes, clothing, and balls. Jen cut a pencil in half and designed the score card. Team work! I opted for the Franken-ball where Jen decided it was best to keep her eye on the ball…poor joke…very poor joke. It was also decided that the winner of the match would get their choice of ice cream while the loser would be forced to have “the water ice of defeat” with the winner choosing the flavor. 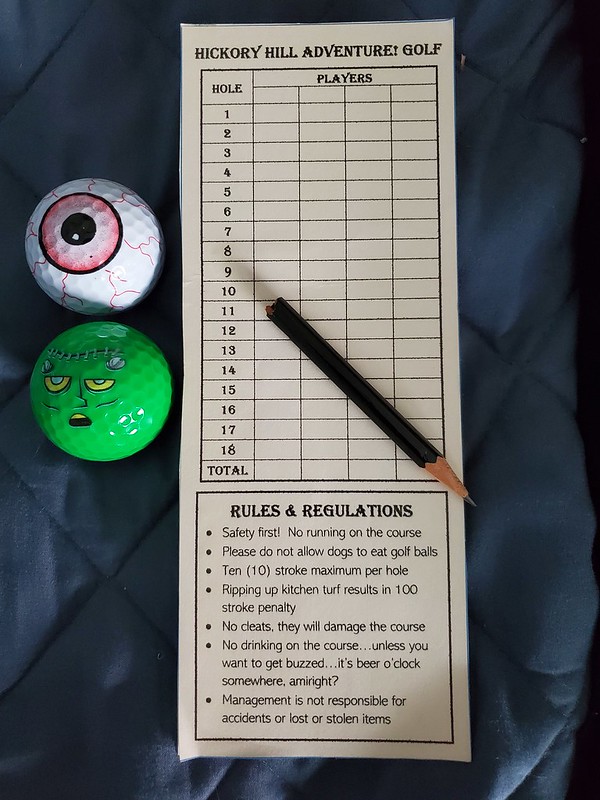 We started with a straightforward shot through the entrance to my house. It allowed us to warm up and figure out how the ball will roll on tile. Also we found out how uneven my house seems to be! Jen – 3 strokes, Andrew – 2 strokes. 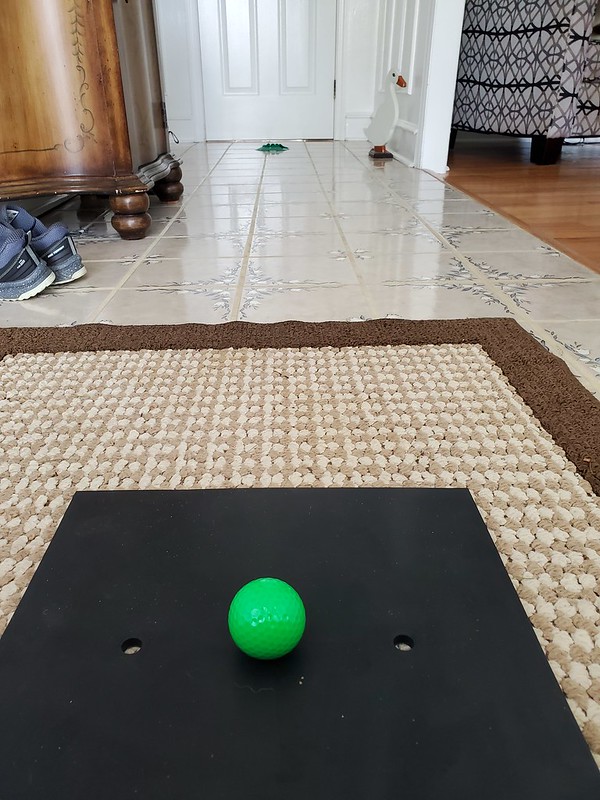 Hole 2: From the main foyer into the antechamber outside of the bedrooms and master bathroom.

Antechamber is my fancy way of saying “that awkward area outside the bedrooms and bathroom.” 3 strokes for everyone 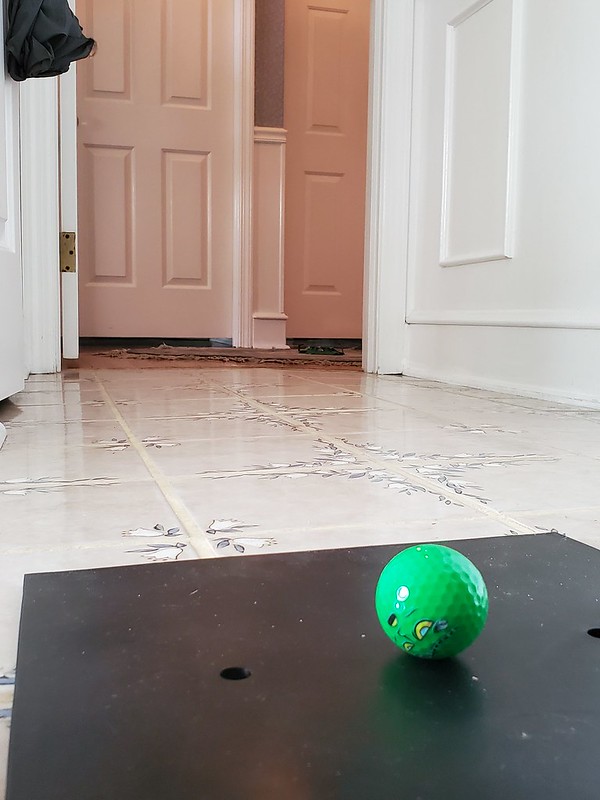 This one introduced the first obstacle. You had to take your first shot from the toilet with your pants around your legs (underwear stays on for hygiene). Jen complained that as a right handed putter she was at a disadvantage. She was right and I started taking an early lead! Jen 4 strokes, Andrew 2. 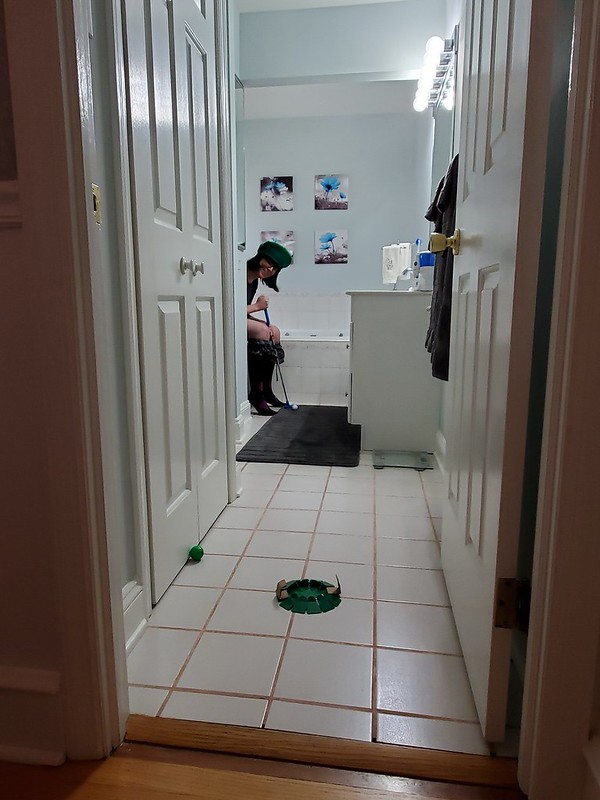 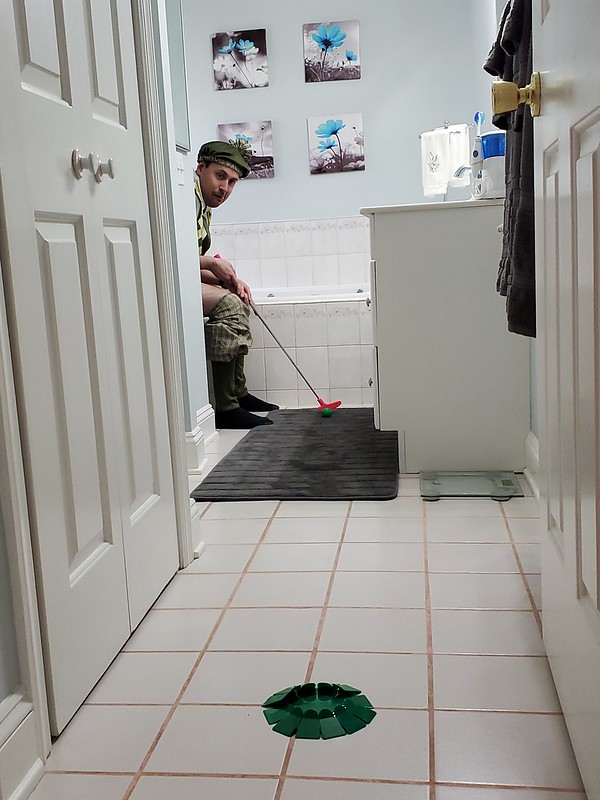 This was another straightforward shot but one I messed up. I aimed for the tube, hoping for a hole-in-one. Somehow both Jen and I managed to hit the ball in the little space between the cabinets and the Styrofoam. Still we both managed to get the hole in 2 strokes. 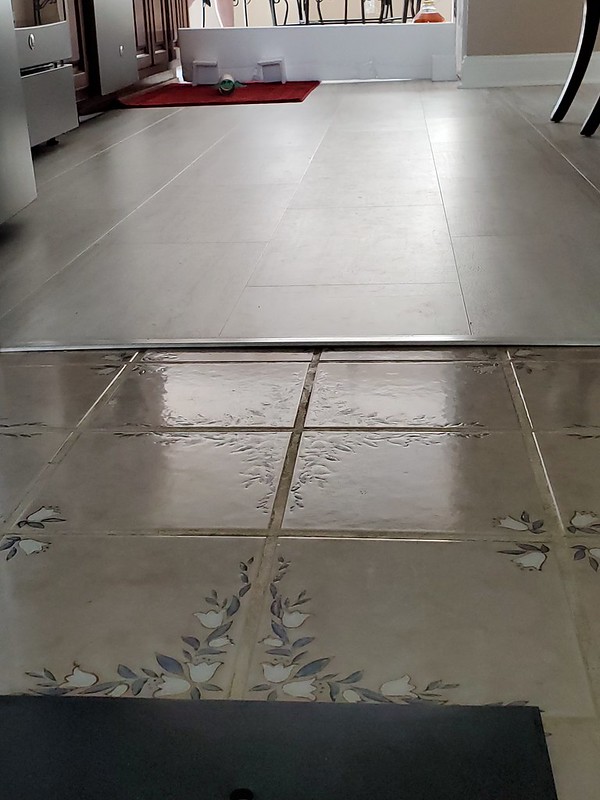 You can see we added little cardboard wings to the holes. Our shots were getting in but then rolling out the sides where there was nothing to block them from rolling out. Jen came up with this brilliant idea so we could actually sink a shot! 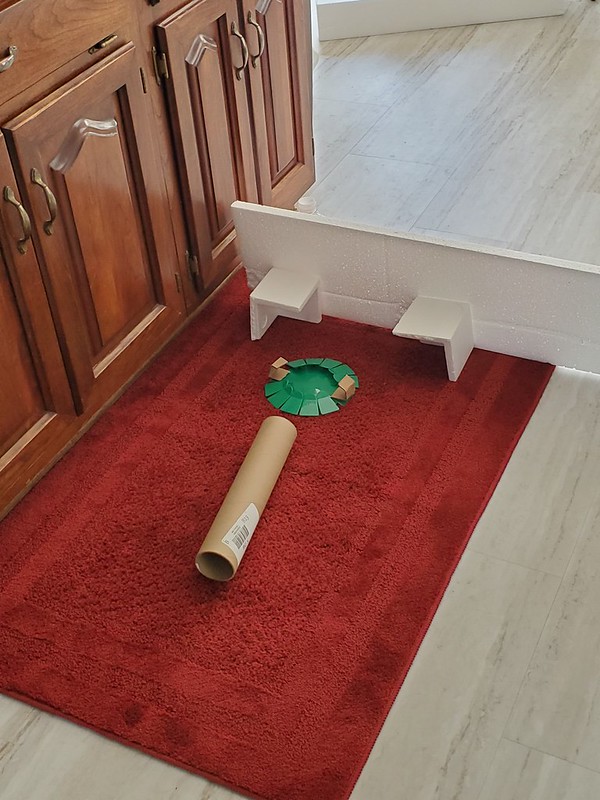 I’ll let the video describe the shot. It was not a good one for me and allowed Jen to make a comeback. Jen 4 strokes, Andrew a crappy 6. I kept getting stuck behind the door leading to the bathroom.

Hole 6: Kitchen to landing and into the haunted basement!

I set up three scary holes in the basement. Check out this awesome shot for the first hole. We each sank the ball in 3 strokes.

It’s hard to see but the wall stopping the ball at the bottom of the steps has blood splatter print and as you get closer to the hole you can see Frankenstein’s monster and Skeletor’s castle. Good stuff.

Hole 7: Through the scary toy yard, around the coffee table of doom, and past the Mummy and Leather Face. Or an optional shot through the snake castle.

Jen tried to get through the castle and suffered 5 strokes! I went the long way and knocked it out in 4. 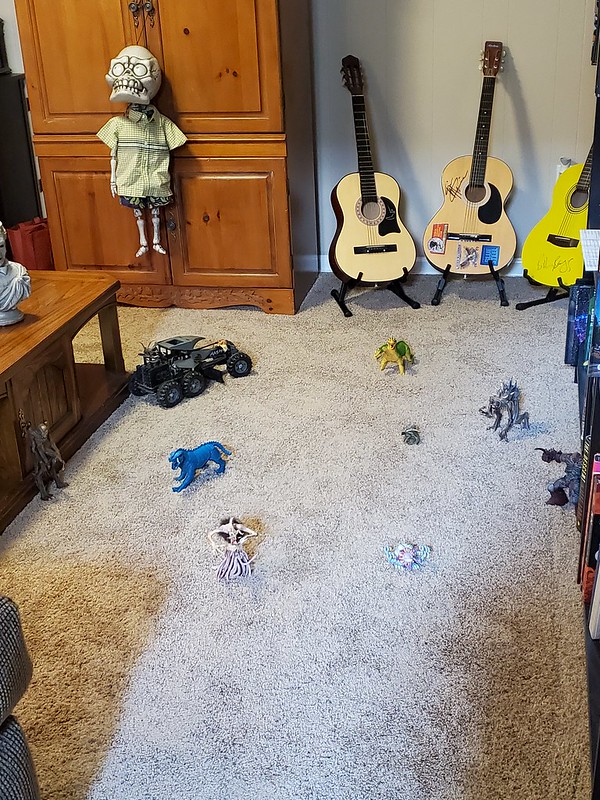 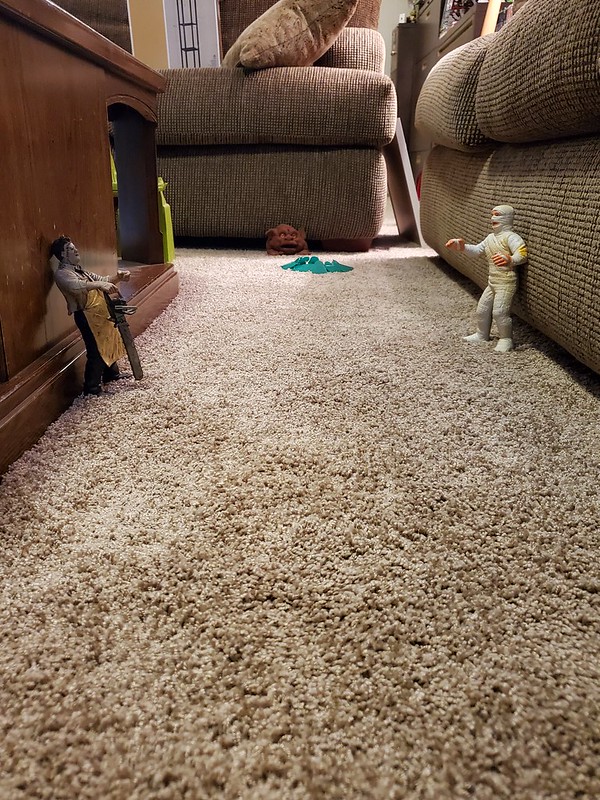 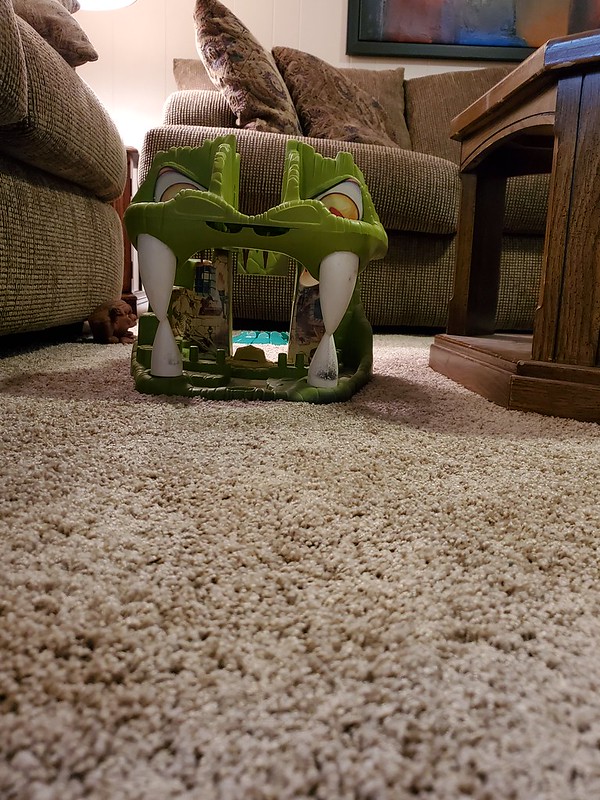 Hole 8: The scariest of the holes!

This was the closest I got to a hole-in-one. I made it to the gate of Castle Greyskull but had to tap it in once more for a 2 stroke putt. Jen was a bit too scared for this hole and got it in 3. Beware hole 8 (volume up)!

We headed back upstairs to the walkway connecting my kitchen to my dining room. I obviously had to factor Diet Coke into my course somehow, so I used a few cases as bumpers. For those of you who think I’m hording them because of quarantine, please note my house usually has about this many cases at any given time. 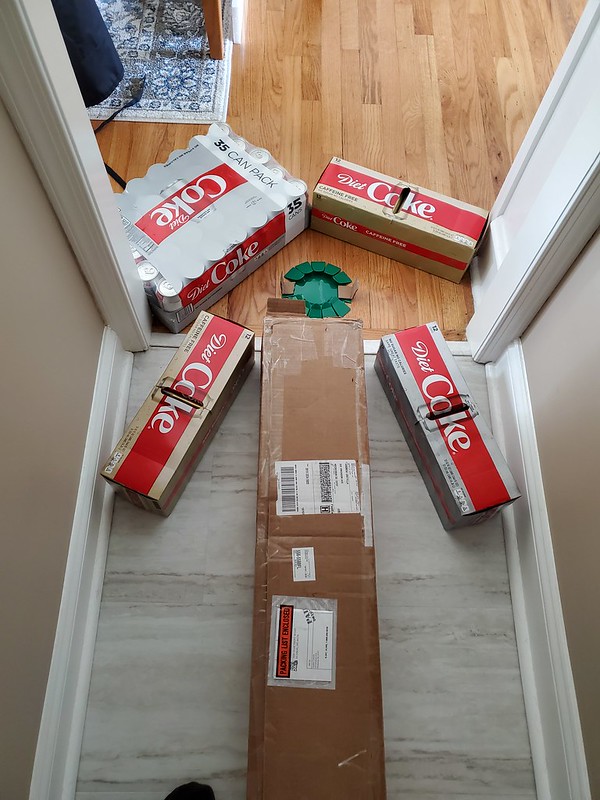 Surprisingly not my best hole. My ball got stuck in the box which gave me 5 strokes to Jen’s 3. 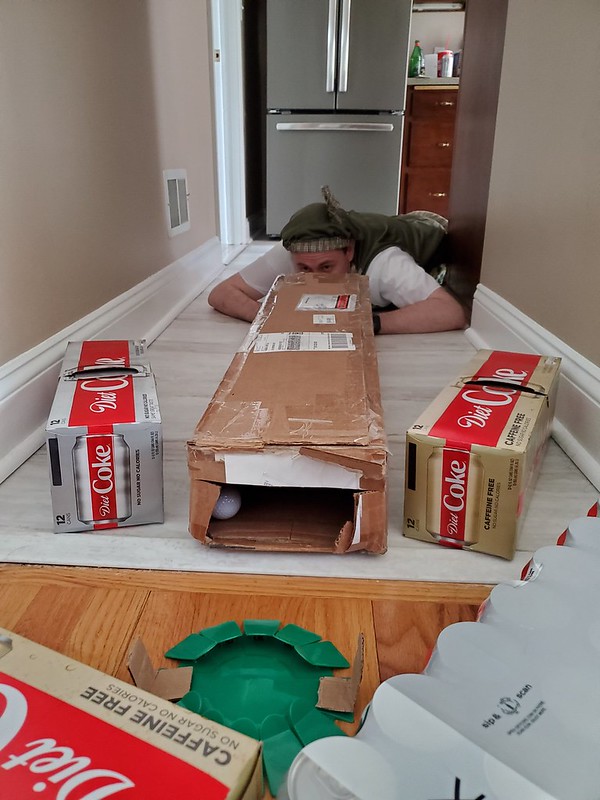 This one looped around the dining room table and was supposed to go into an empty coke box which would then empty out into cup. The hardwood floor made it difficult and the balls bounced all over. Neither of us got into the box and ended up bouncing in from the other side. Jen 3 strokes, Andrew 2. 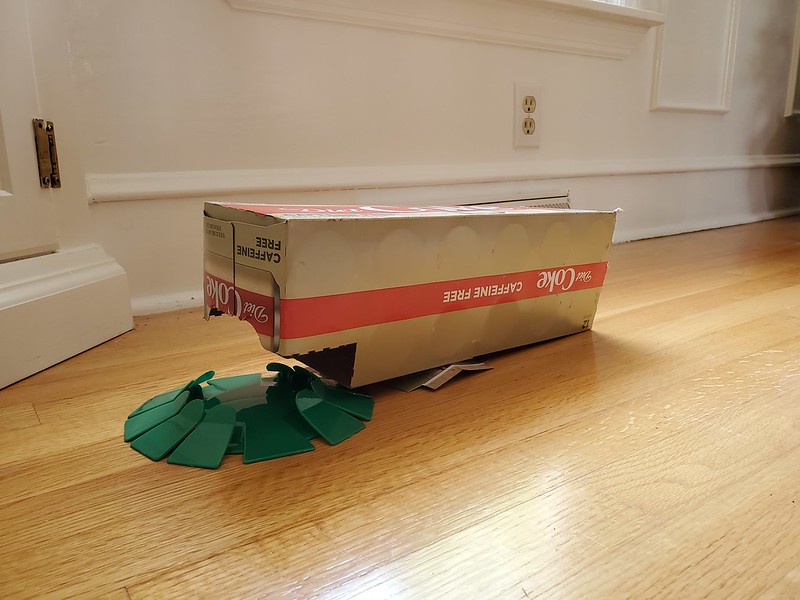 This was another straightforward shot. The thing that sets it apart is having to traverse a very textured rug. It did stop the roll very quickly and trapped the balls under the table. We then used our clubs like pool sticks to sink the shots. Jen 2, Andrew an embarrassing 5. 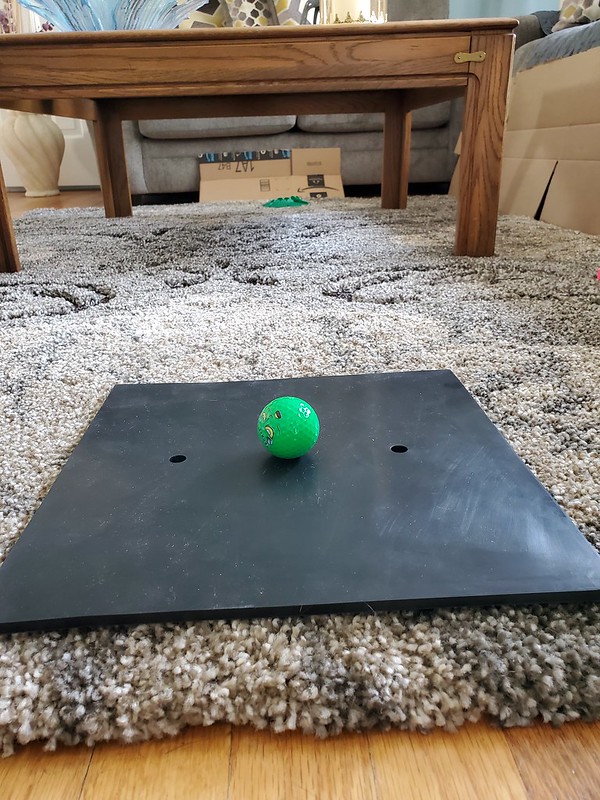 This was a tricky one. We started off hitting from the top of three steps, down into the room, where the hole was hidden behind a trunk. You couldn’t just bounce it off the fireplace, it was a minimum 2 hit shot. I got that minimum! Jen dropped the ball (see what I did there?) and got it in 4 strokes. 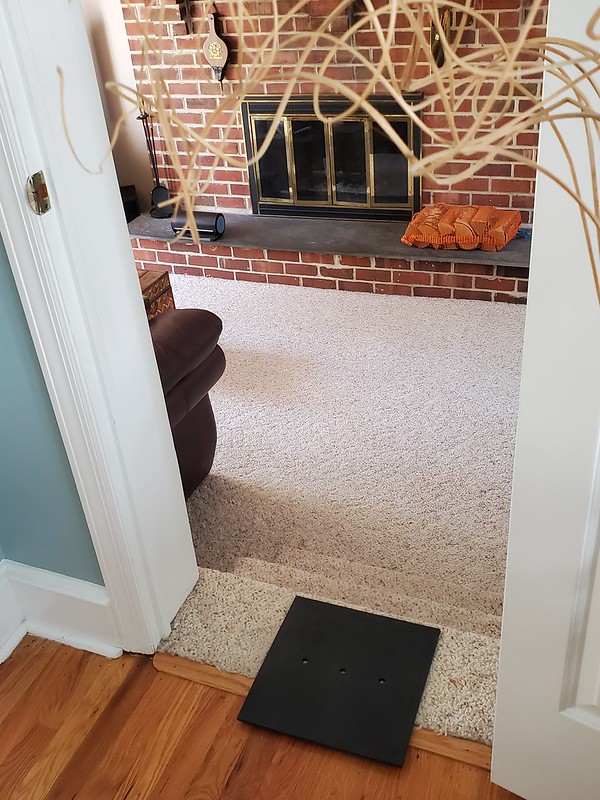 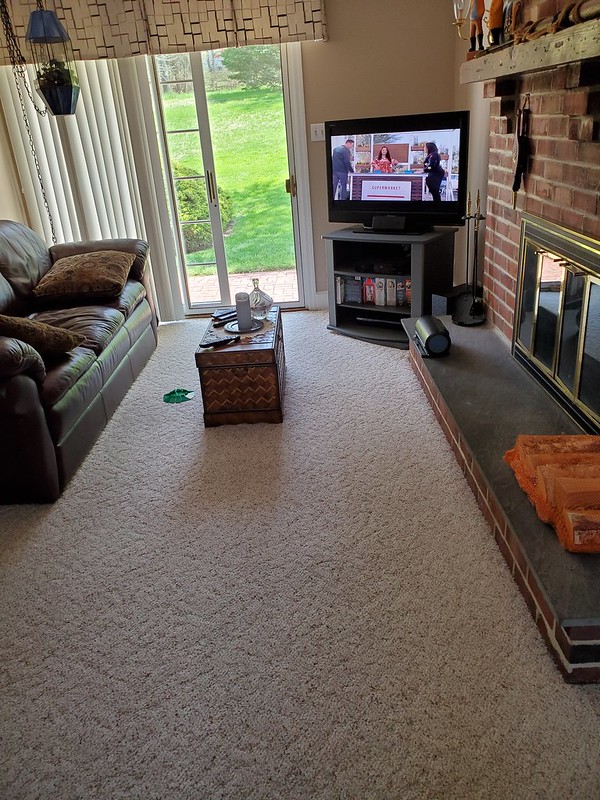 The first outdoor shot was the hardest. We had to hit it off the deck, onto the raised area where the fountain use to be, and into the hole. We had to compete with the boards on the deck, the grass in the yard, and then a half foot rise up to rocks. We both had to take the 10 shot maximum. Jen didn’t get it off the grass, I did but failed from there. Lucky 13.

We’re trying to let the grass seed take, so my lawn is a little shaggy right now. That made trying to putt through it rather difficult. Hole 14 was down the length of my backyard to the patio where I set fireworks off where the cup was housed. This hole is much harder than it looks. Again we each took the max 10 strokes. Playing outside was not looking good. 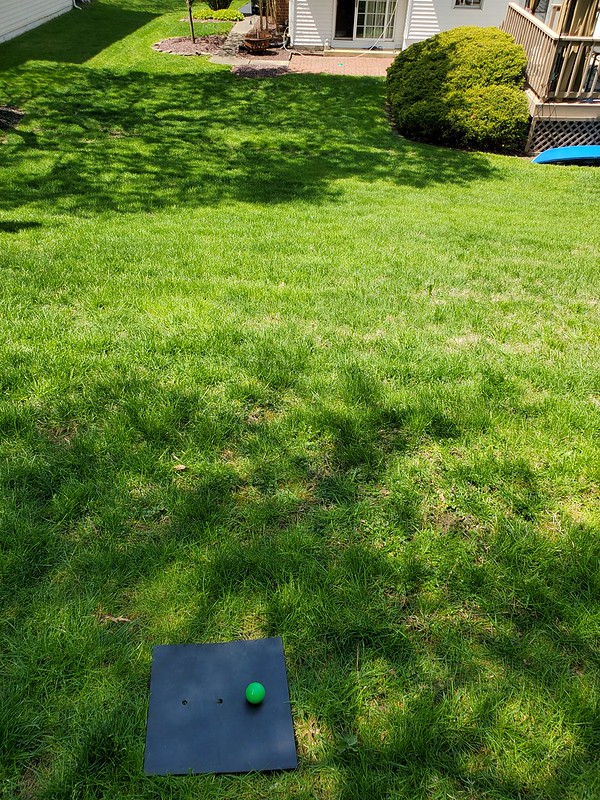 Hole 15: Sidewalk on the side of my house

Grass to the left of us, rocks to the right, here I am, stuck in the middle on cement. We were putting into my driveway which is on a nice slant. It was important that we not hit the ball too hard or it was going all the way to the road. It was best to aim for the bushes and hope you didn’t get too far in. Jen 5, Andrew 3. 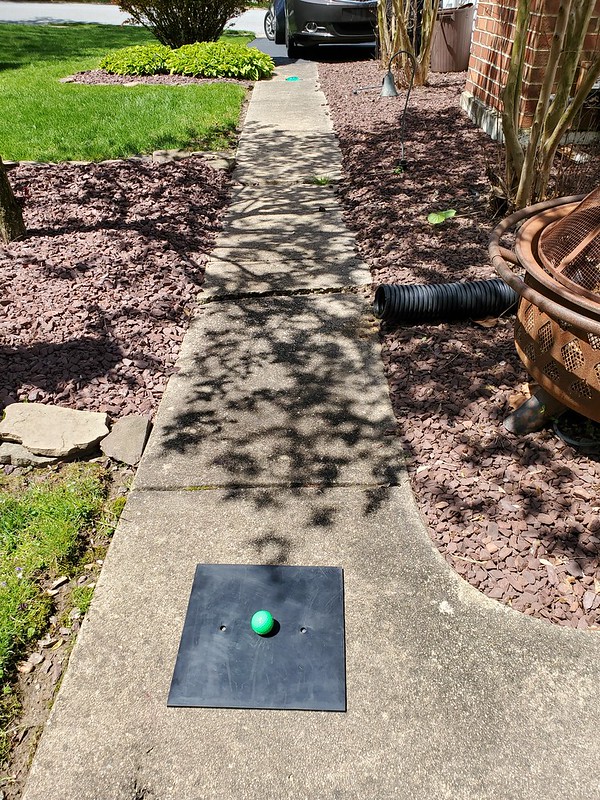 Again the tall grass foiled us. What seemed would be an easy, straight shot turned into a lot of small putts trying not to rip up the grass or end up in the street. It was from the mailbox to the property line. A large man walked by with his baby, smiled, and said “I get it” when we told him we were going stir crazy. This ended up a lot harder than it appears. Jen 5, Andrew a svelte 4. 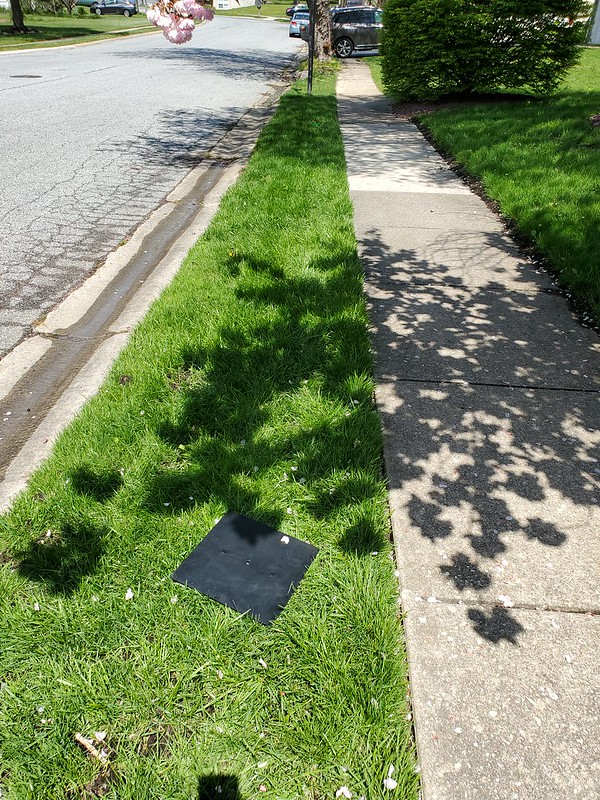 The different textures of the course made it difficult to know how hard or light to hit the ball. Linoleum, hardwood, grass, concrete, rugs, carpet, and brick all have different ways of throwing or slowing the ball. This penultimate shot was down the red brick walkway leading to my front door. It’s surrounded by rocks and ends in the grass or bush. There was also a curve to add to the difficulty. We both overshot into the grass but sank the shot in 3. 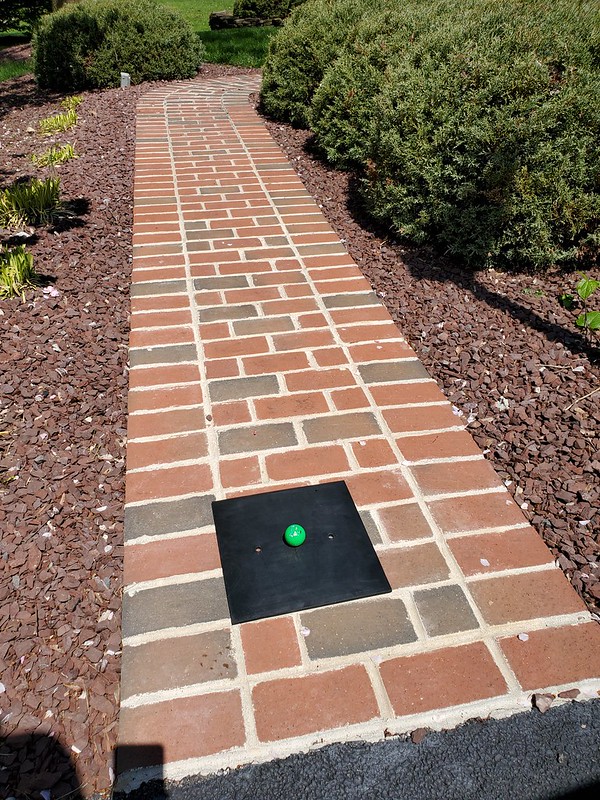 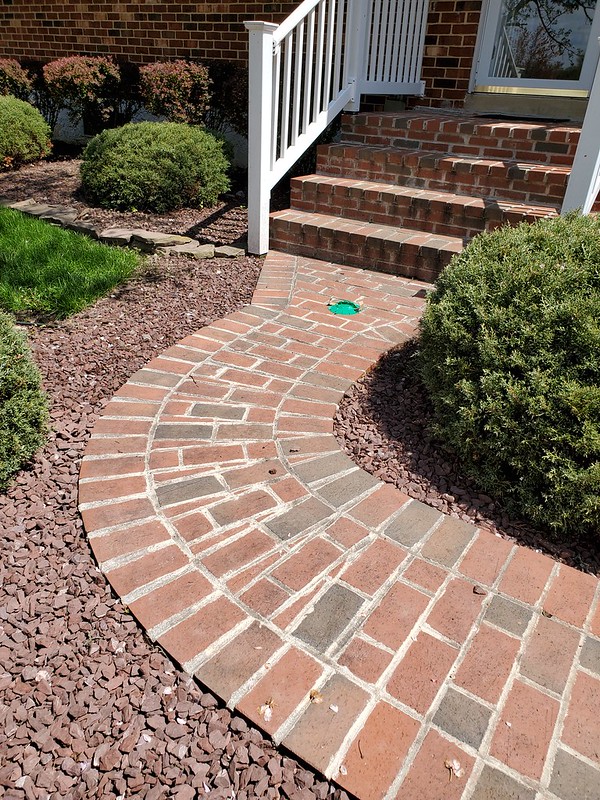 We can get by without a windmill and still consider ourselves a professional course. In order to make it legit however, we have to end the course with a clown. And if you get a hole-in-one, you earn a free pizza/ice cream…we’re not sure yet. Jen did an amazing job building the ramp. 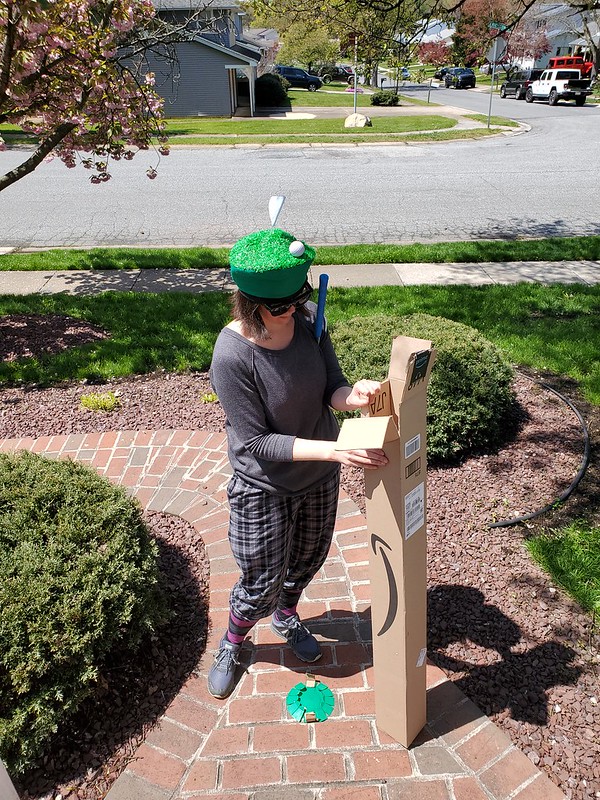 To reward such excellent construction skills, the mini-golf Gods gave her a two stroke putt. Look where her initial shot landed! 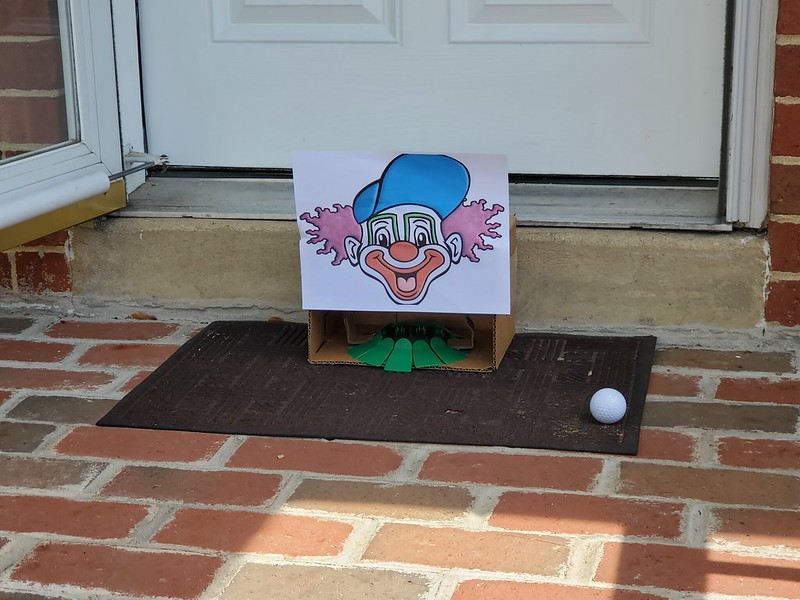 I didn’t end on such a high note, I sunk the ball in 4 strokes. It was time to tally the scores. 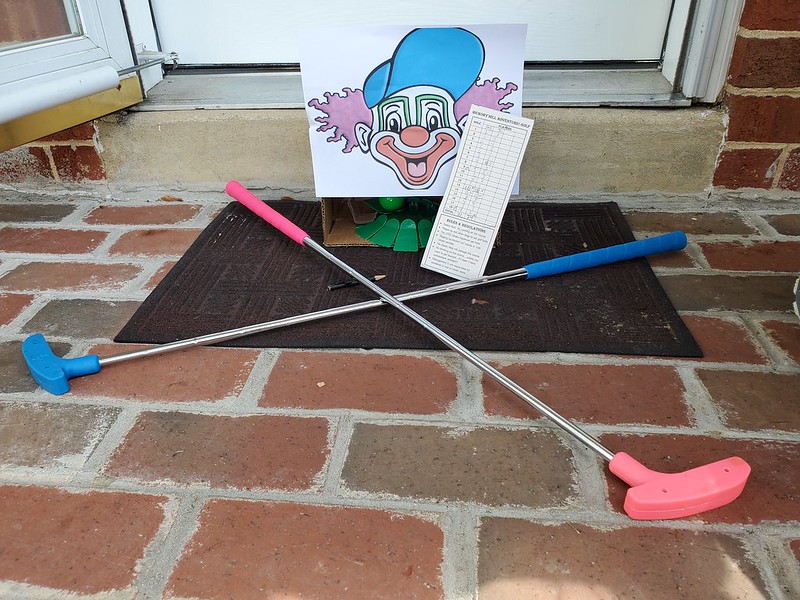 We ended the front 9 with me 1 stroke ahead. Not much of a lead and it looked bad since Jen destroyed me in the 9th hole. Fortunately I was able to keep 1 stroke below her for the back 9 also. Final score was 72 to 74. I won by 2 strokes, definitely a close game. This led to the awarding of the medals.

All that was left was to head to Rita’s. Of course I had to go with the gimmick flavor in hopes that it would be terrible. Being as neither Jen nor I are sports people, a Philly’s Eagle flavor seemed like an even bigger slap to the face. 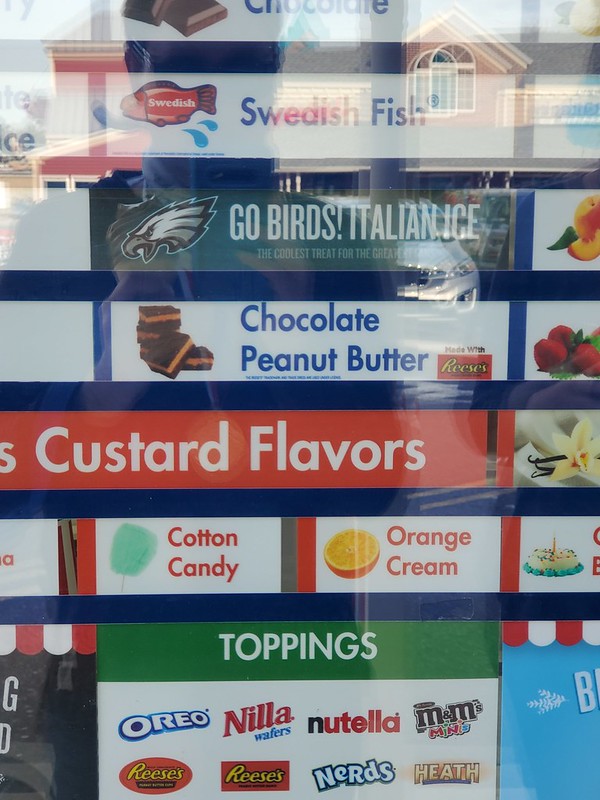 It was grape and green apple mixed together. It wasn’t so much that it was bad, it just wasn’t good. My ice cream however, was delightful. And yes, we did wear our medals with our face masks. 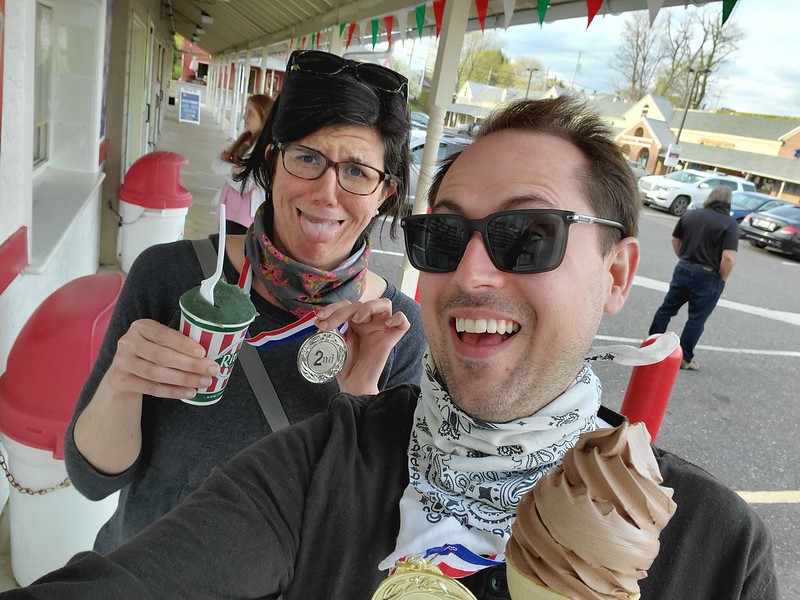 So how does this add up? Surely it can’t be in the same category as a bone-breaking bull ride?! Well it is. April’s big adventure knocked out! Now I have to start writing about the 38 little ones…geez…. 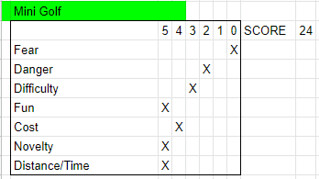 One thought on “Forty Adventures #12 – April”