I’m more or less a morning person. I like to get up and do what I have to do. Normally if I have to travel somewhere I start early but we were able to get better rates if we caught a night flight home. That makes me anxious because all day I feel like I’m looking at my watch. For this trip though, it worked out perfectly! Had we left in the morning, I would have missed a most serendipitous discovery! Peep below for more pictures and my fantastic find! Also trolls, pennies, and ice cream…

The Fremont Troll is a popular public sculpture under a bridge in a fun part of Seattle. It was created by multiple artists in 1990 by a council trying to rehabilitate the area. Of course the road is now Troll Avenue and doesn’t seem like what was referred to as “a dumping ground and haven for drug dealers.” We actually had to wait in line to get our picture taken! 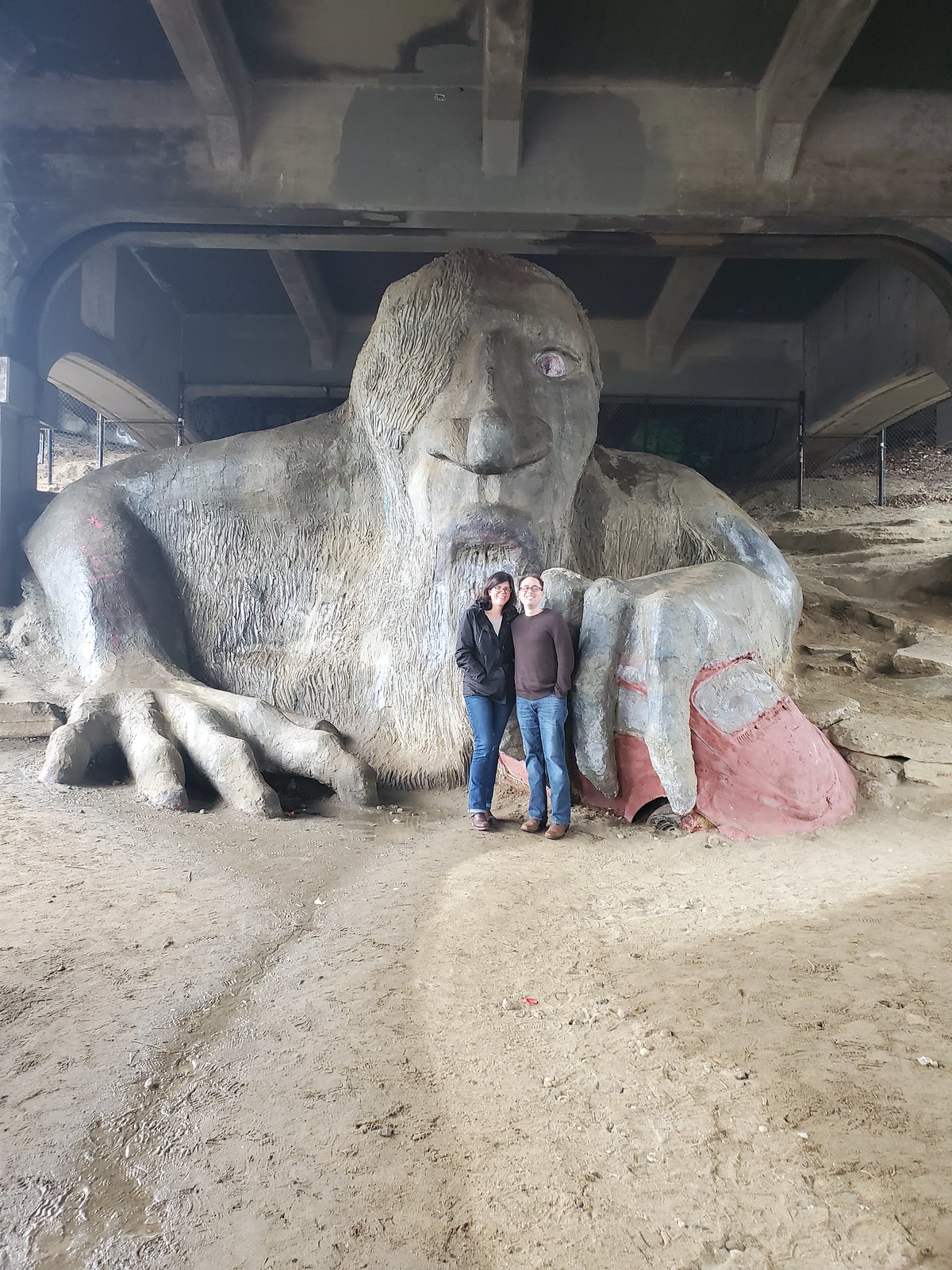 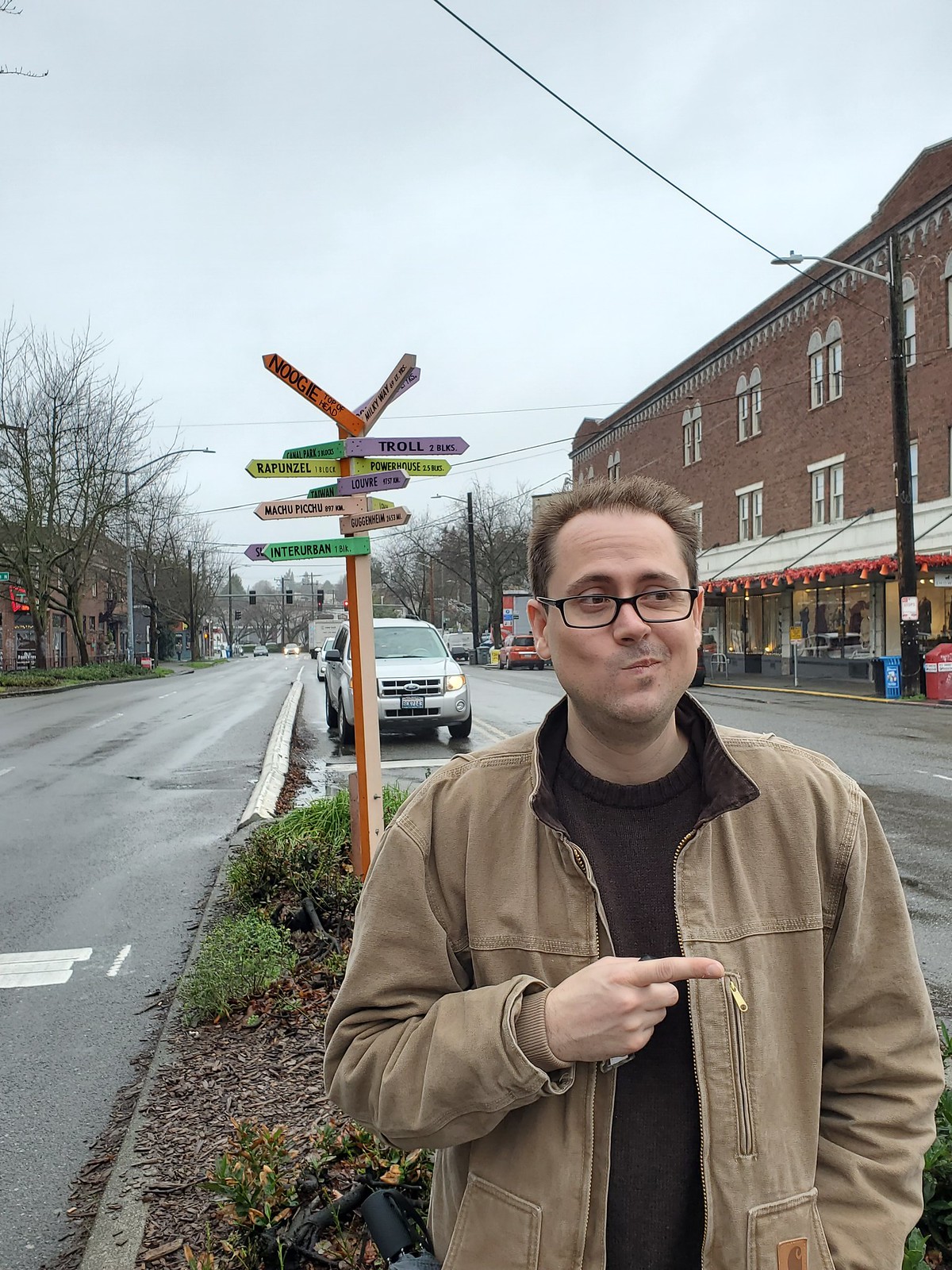 This is where the story starts to get good…for me at least. I had to find the center of the universe. I found it. But look at that face. More important than anything, I had to find a bathroom. I honestly thought I was going to wet myself. It’s Seattle, just go to the one of many coffee shops that supposedly litter the city. We found two. One didn’t seem to have a bathroom. Things were close. Too close.

We got some warm drinks because I feel guilty not buying something when I use someone’s potty, we started out of the store. I had noticed a pointer on the sign above saying “Dinosaur,” a favorite word of mine. At the shop we saw something else for the dinosaur topiary down the street and decided to walk down that way. On the way though, we got distracted by a chocolate shop! 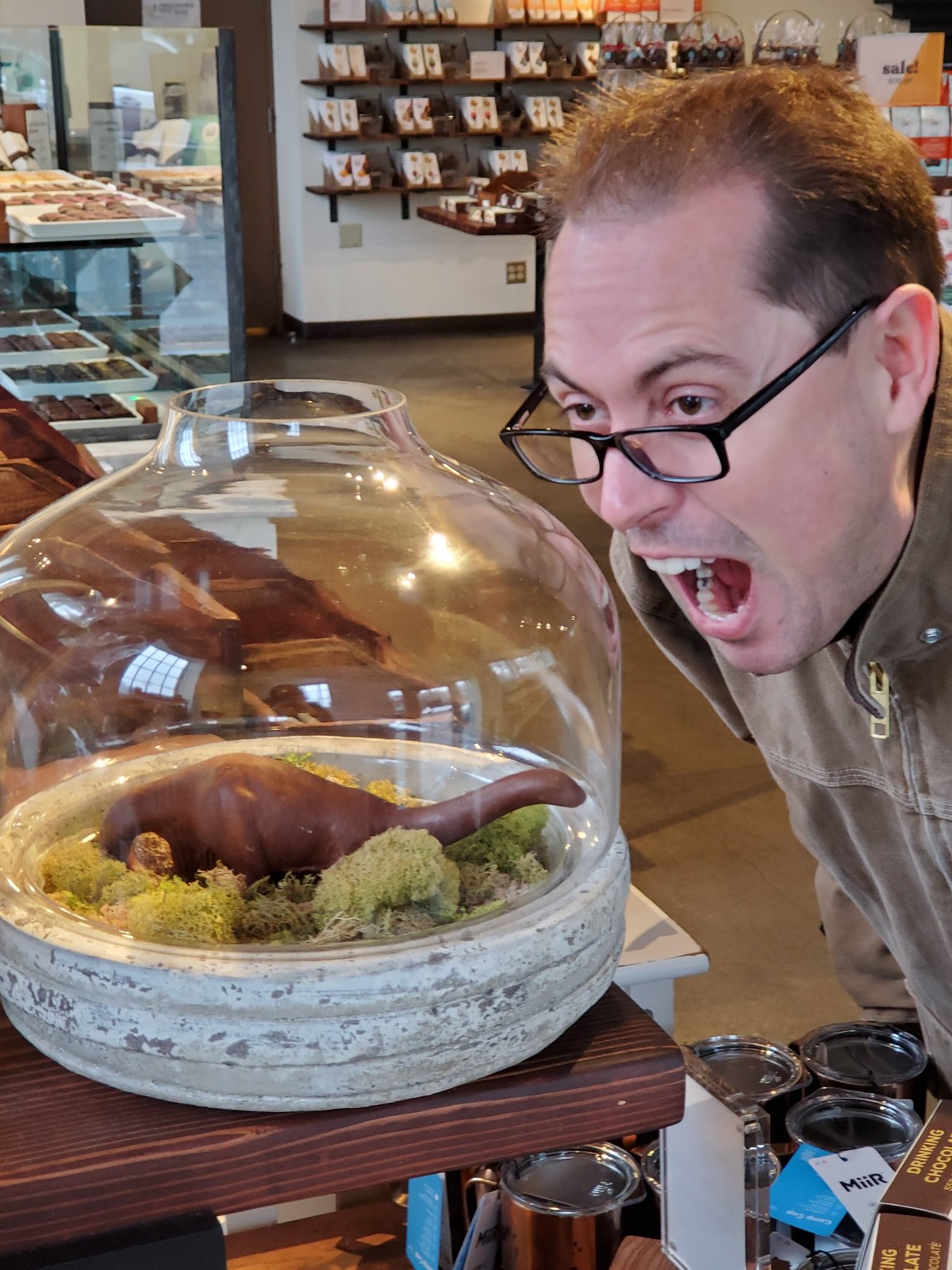 Yet another picture of me being stupid with an inanimate dinosaur. Anyway the shop is near the chocolate factory and we thought about getting a tour. The price being high and other ideas for our agenda, we hit all of their free samples and split looking for dinosaurs. Fortunately they were across the street so we didn’t actually have to look for them. 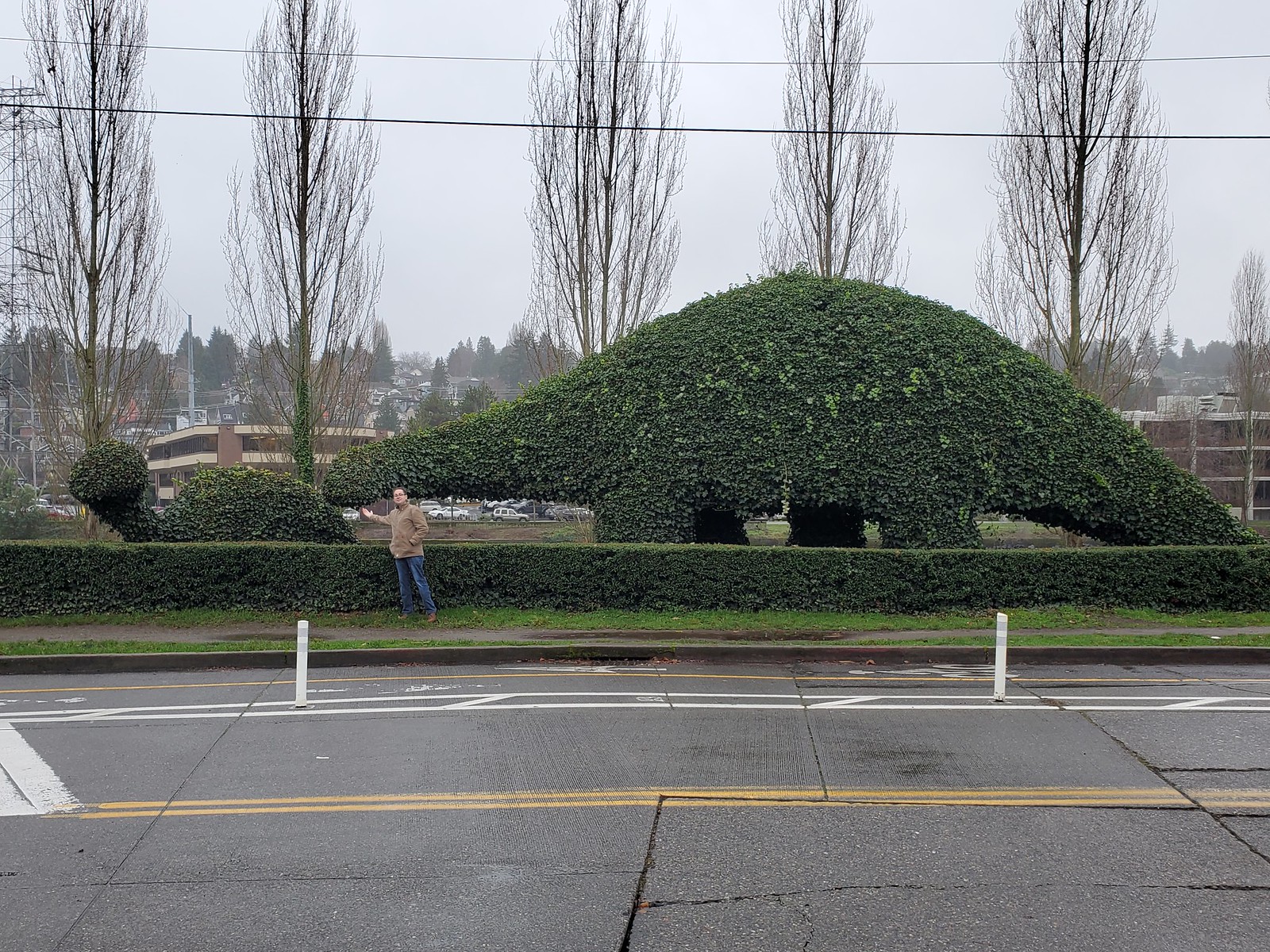 Right next to the dinosaurs we saw the sign below. I was trying to figure out why it would have all of these companies listed but also a geo-trail. It took me an embarrassingly long time to realize the home of Geocaching.com is located in Seattle and was a short walk from me! I had to go check it out! For once a strange sight dealing with Geocaching wasn’t on my radar! It made my day. 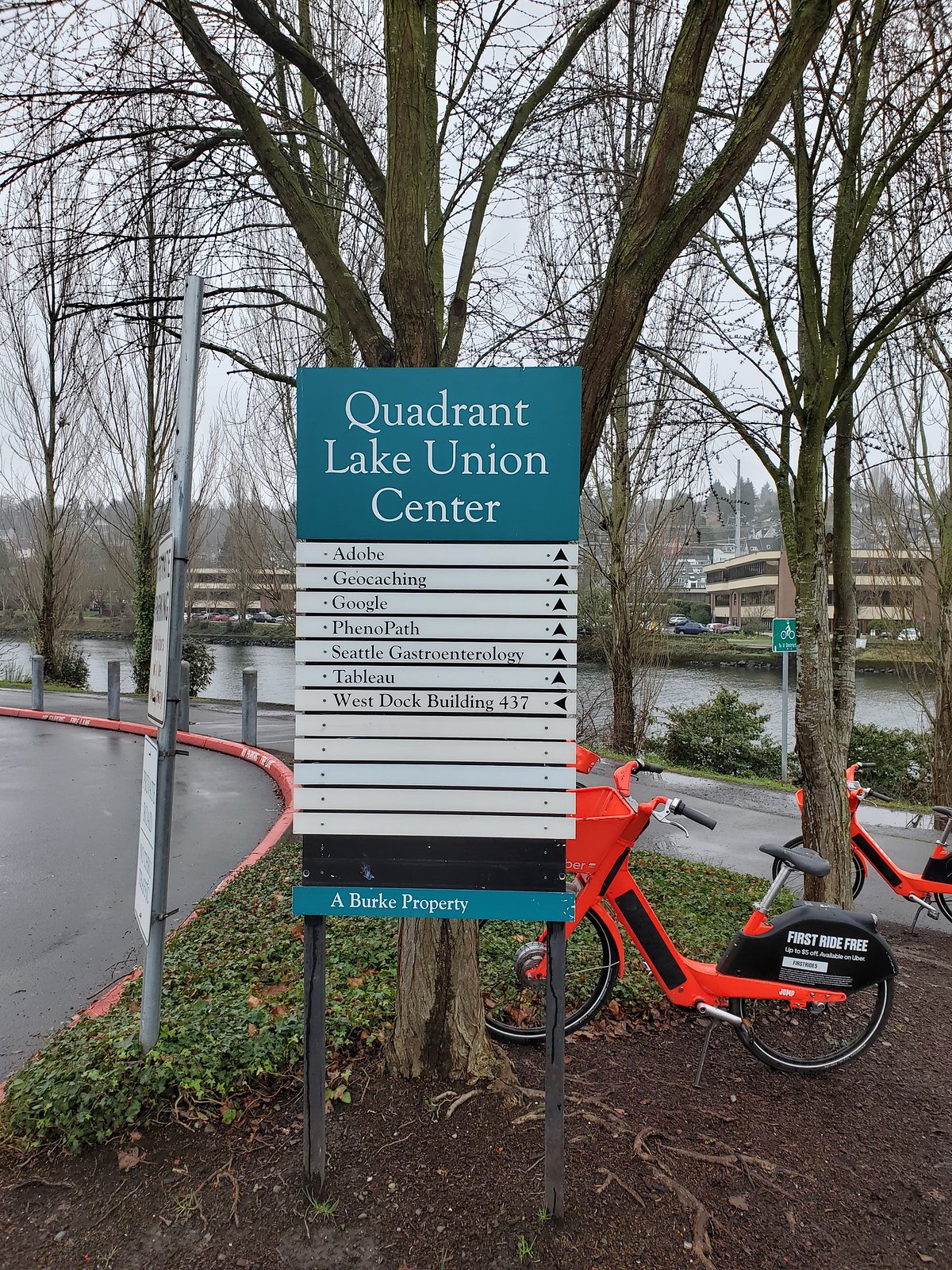 The day kept getting better. Outside of the Geocaching headquarters we found some fun statues. Jen had one in particular she had to get to but humored me in posing for this picture. 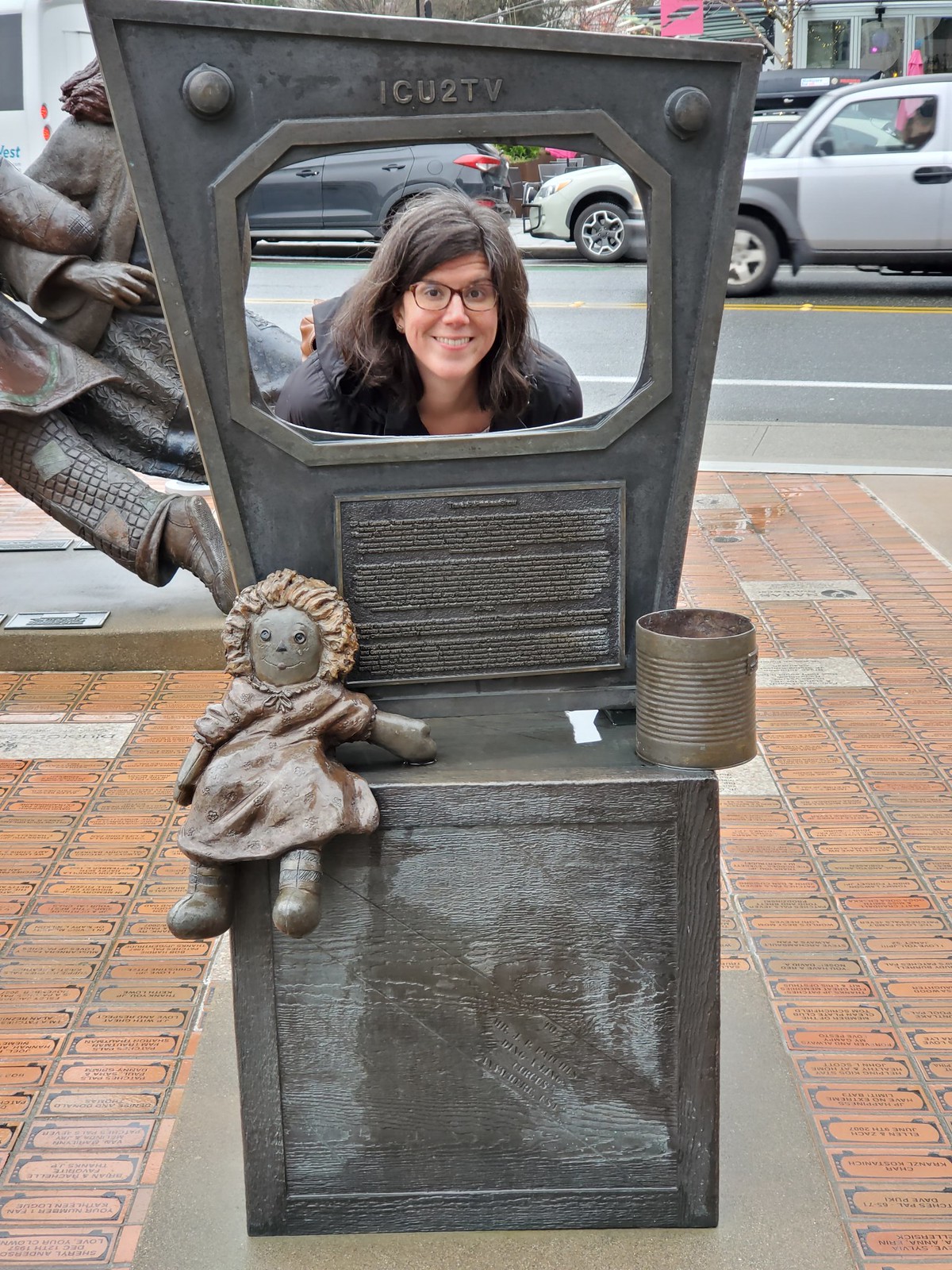 I never did read the significance of this artwork but I had to join in for the dance. 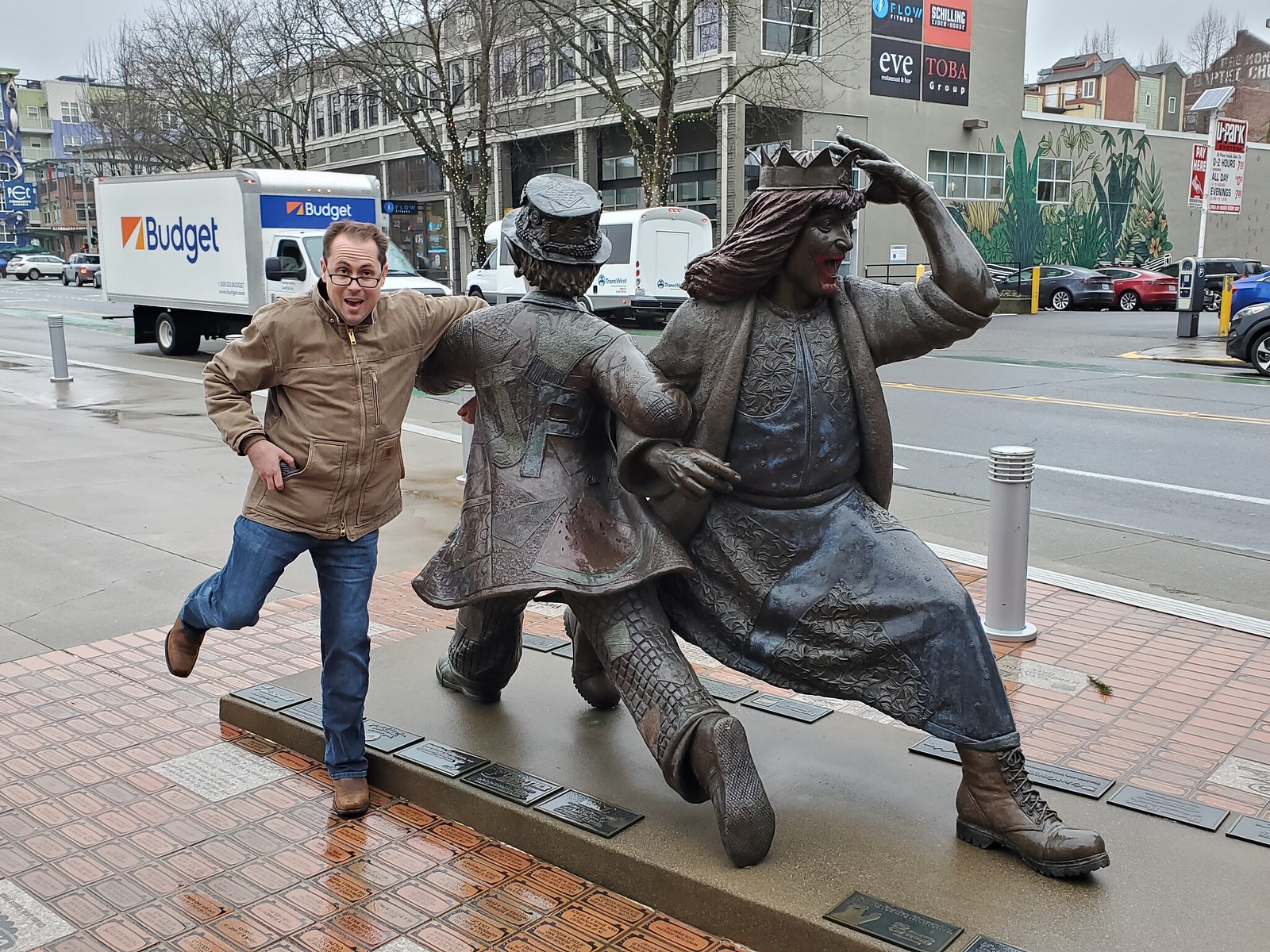 During the trip, Jen was reading a book about the American rowing team that competed in 1936 Olympics. She kept talking about how great it was (she’s a sucker for a heart-warming sports story and recently made me watch Seabiscuit) and that the team practiced in Seattle. Directly across from where we were was a monument to the team. As she’s often my editor/proofreader in these posts, I’ll allow her to add anything she wants here:  “I’m good.” 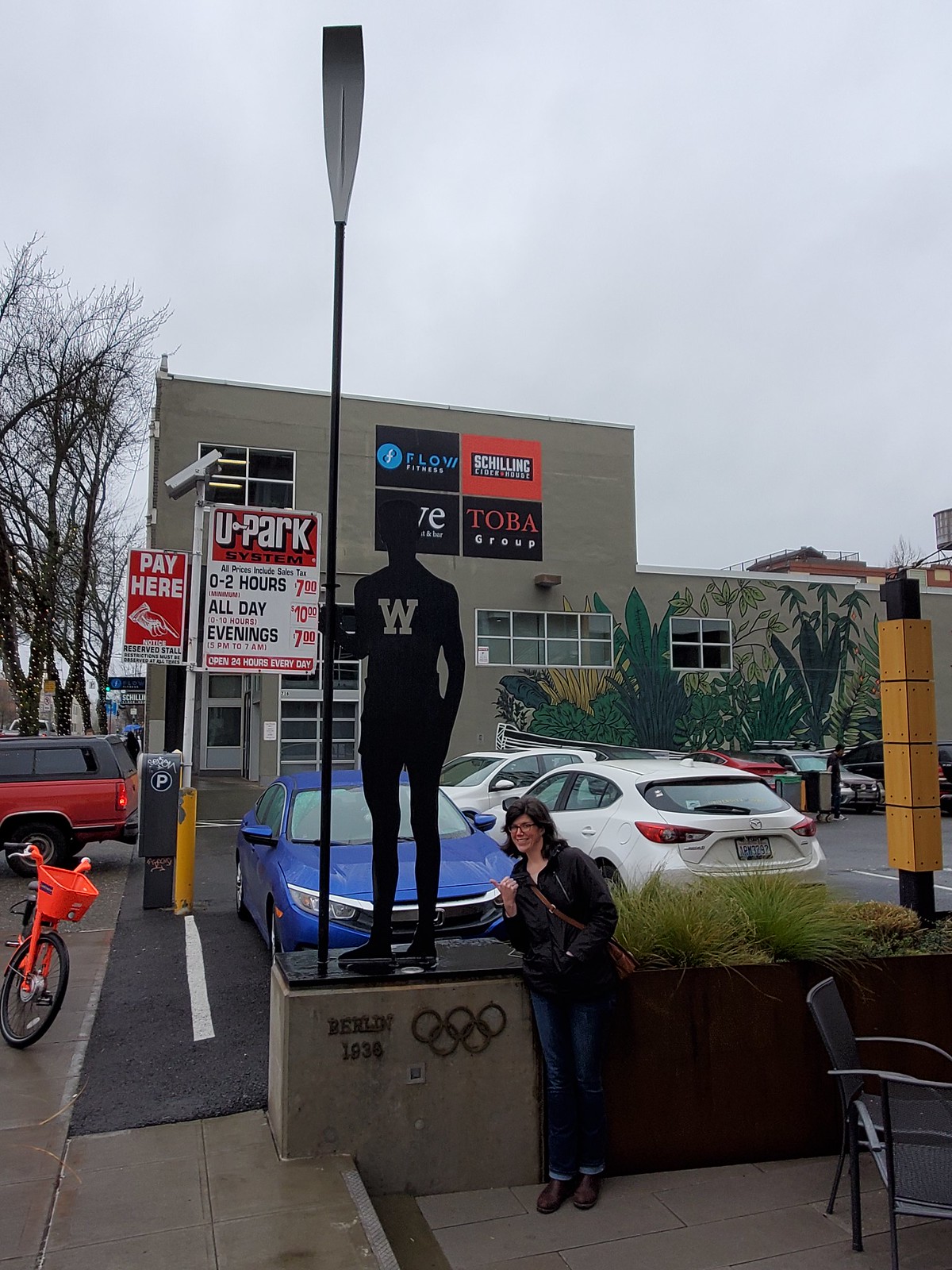 Inside was where I got to shine! There were multiple caches in the headquarters lobby! There was a screen that showed a live map that sent an alert each time someone logged a cache anywhere in the world! I got an awesome hoodie and spent way too long pestering the lady working the info booth. 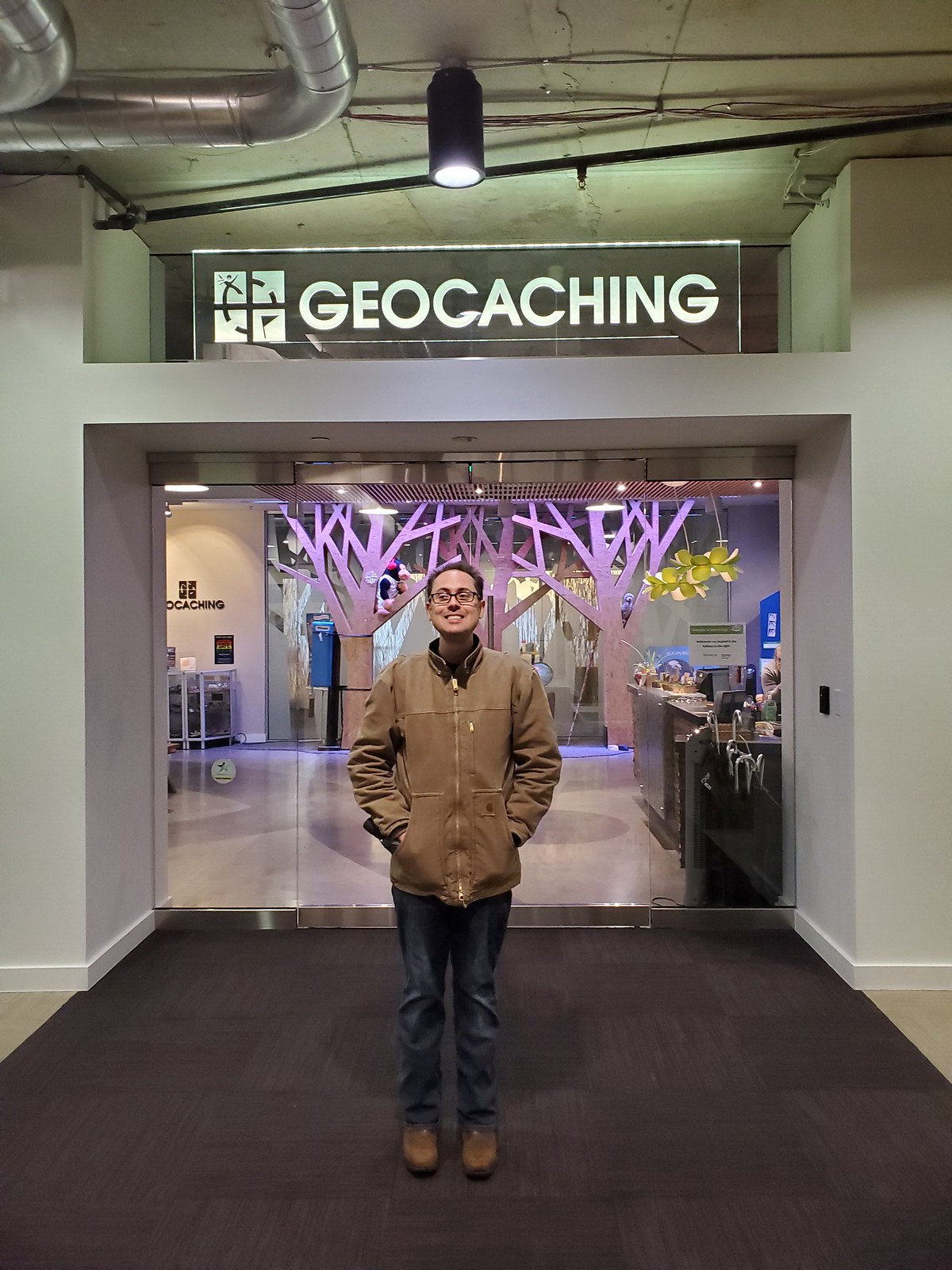 The headquarters gives out a passport for a geo-trail they built. Each cache is supposed to be in walking distance but with our limited time, we had to drive to a few. I was determined to get them all and get my geo-coin though! Jen’s such a good sport and pushed me on. I wish we had known earlier since many of the sites we’d already visited were where the caches were. 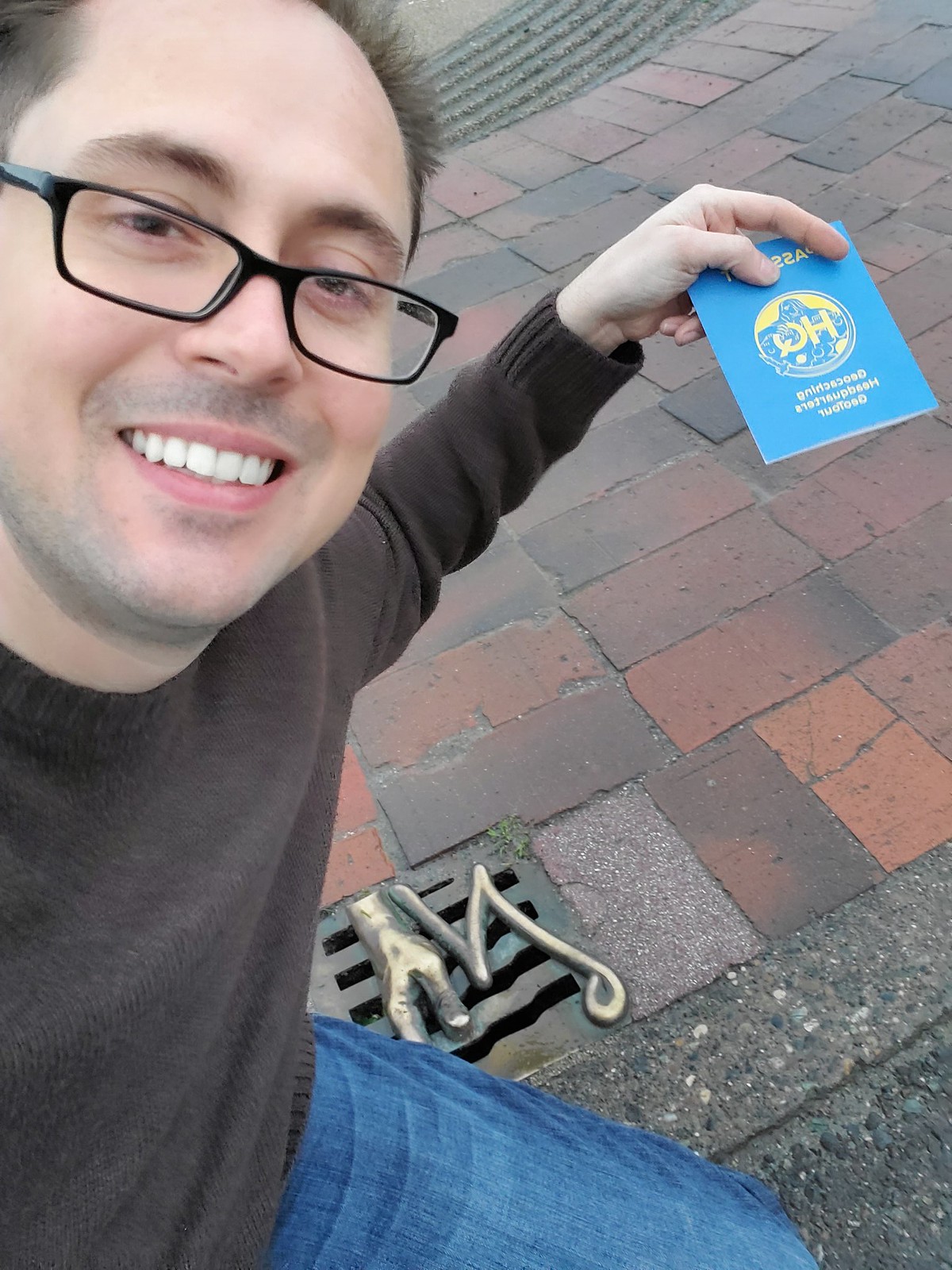 The best cache was in the chair tree. You had to find a little rope and lower a miniature chair that the cache was fastened to. I love when a cache isn’t just hidden under something and that you have to really interact with it. 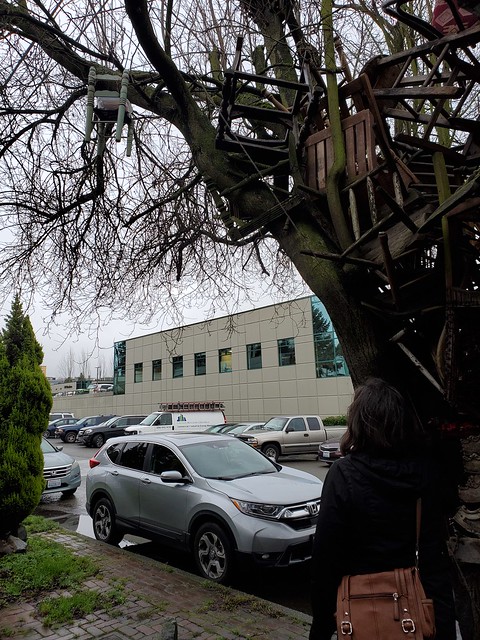 The last stop on my agenda (Jen had an agenda of her own) was the Archie McPhee store.  I’ve been a big fan of their wacky products for most of my life and always enjoy getting their catalog. To be honest though, I never knew they had an actual store front. And I never would have guessed it would look like this: 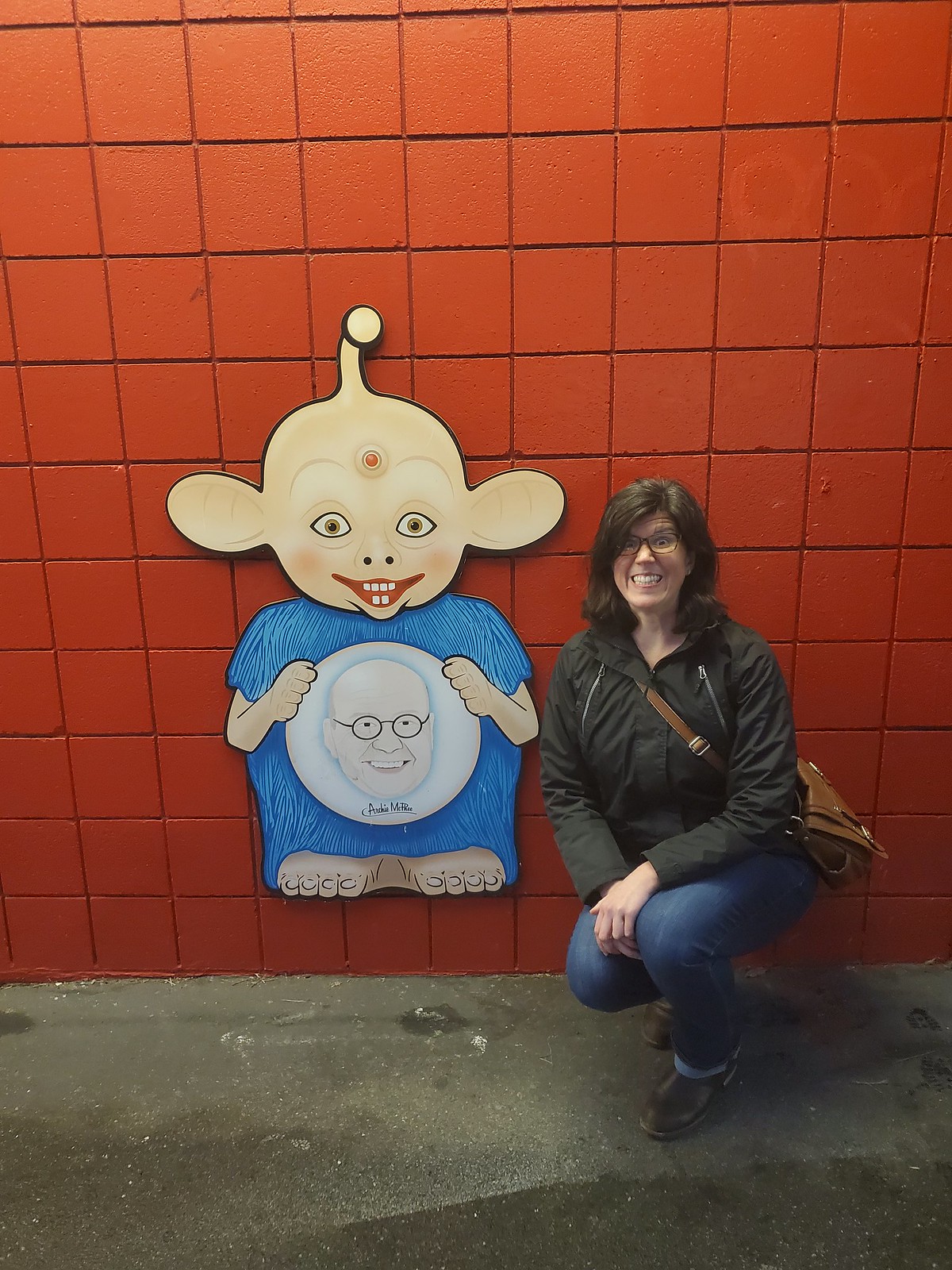 Inside they have a  free rubber chicken “museum.” It’s actually a couple of shelves sanctioned off in the back of the store. Basically my kind of museum. There they have both the largest and smallest rubber chickens! 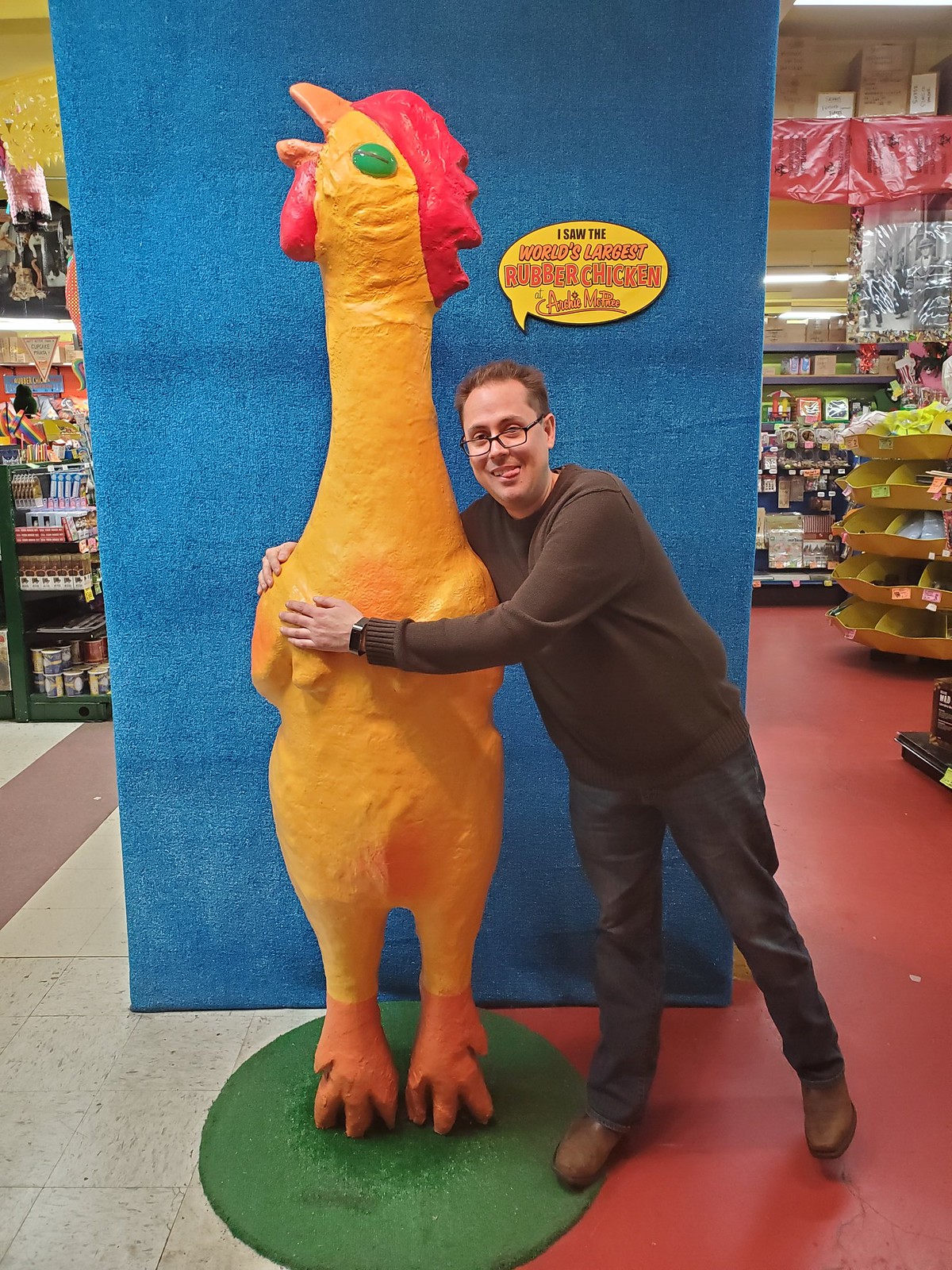 You can see the different types and coloring patterns through the cases. My co-worker said they all look alike. I called her a racist. We’re currently trying to rebuild our professional relationship. 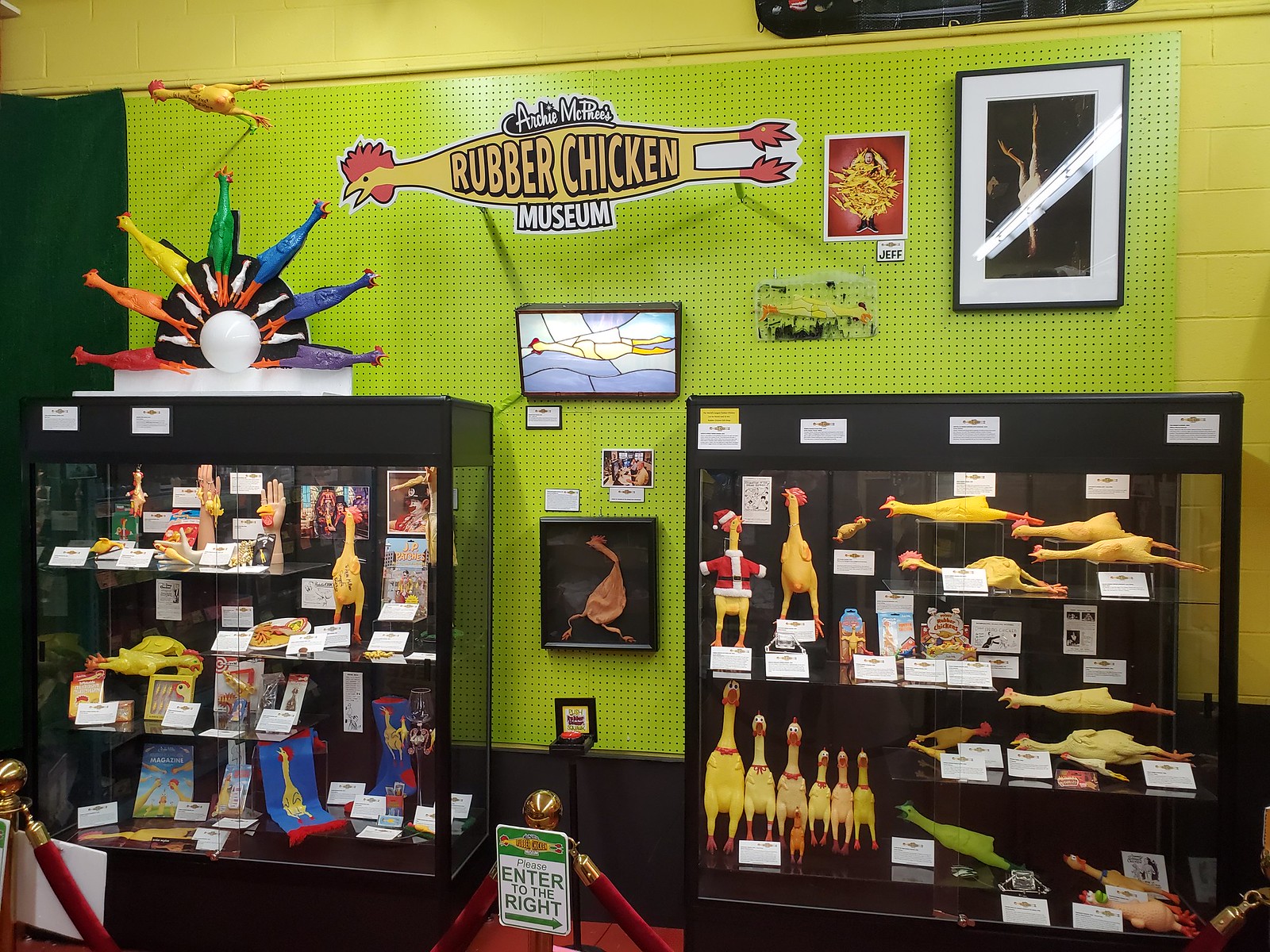 Look how adorably tiny this one is! They have the market cornered in providing props to hack comedian sea monkeys. 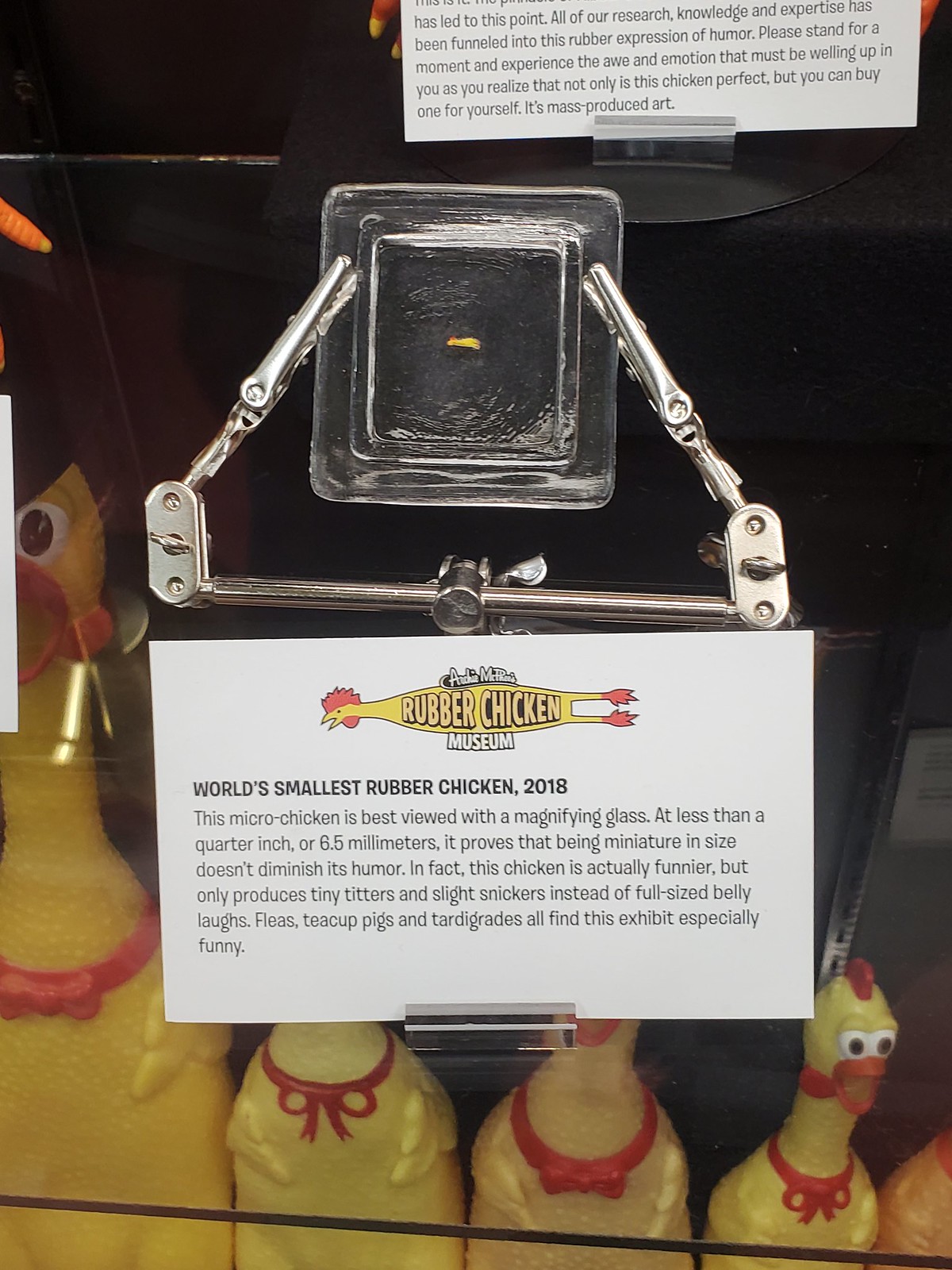 I’ve frequently talked about Jen’s ice cream obsession. It’s not near my Diet Coke addiction but I respect it all the same. She has a rule that wherever there is an ice cream flight, she has to do one. Well ladies and gentlemen, we found that Molly Moon’s Homemade Ice Cream in Seattle, Washington has the most epic ice cream flight. We’re use to getting small cones or 3 or 4 flavors in cups. At Molly Moon’s they give you a scoop of every single flavor they carry! Look at this plate! Look how happy she is! And this is quality ice cream. This is not a case of quantity not quality. Molly Moon’s flight has both! 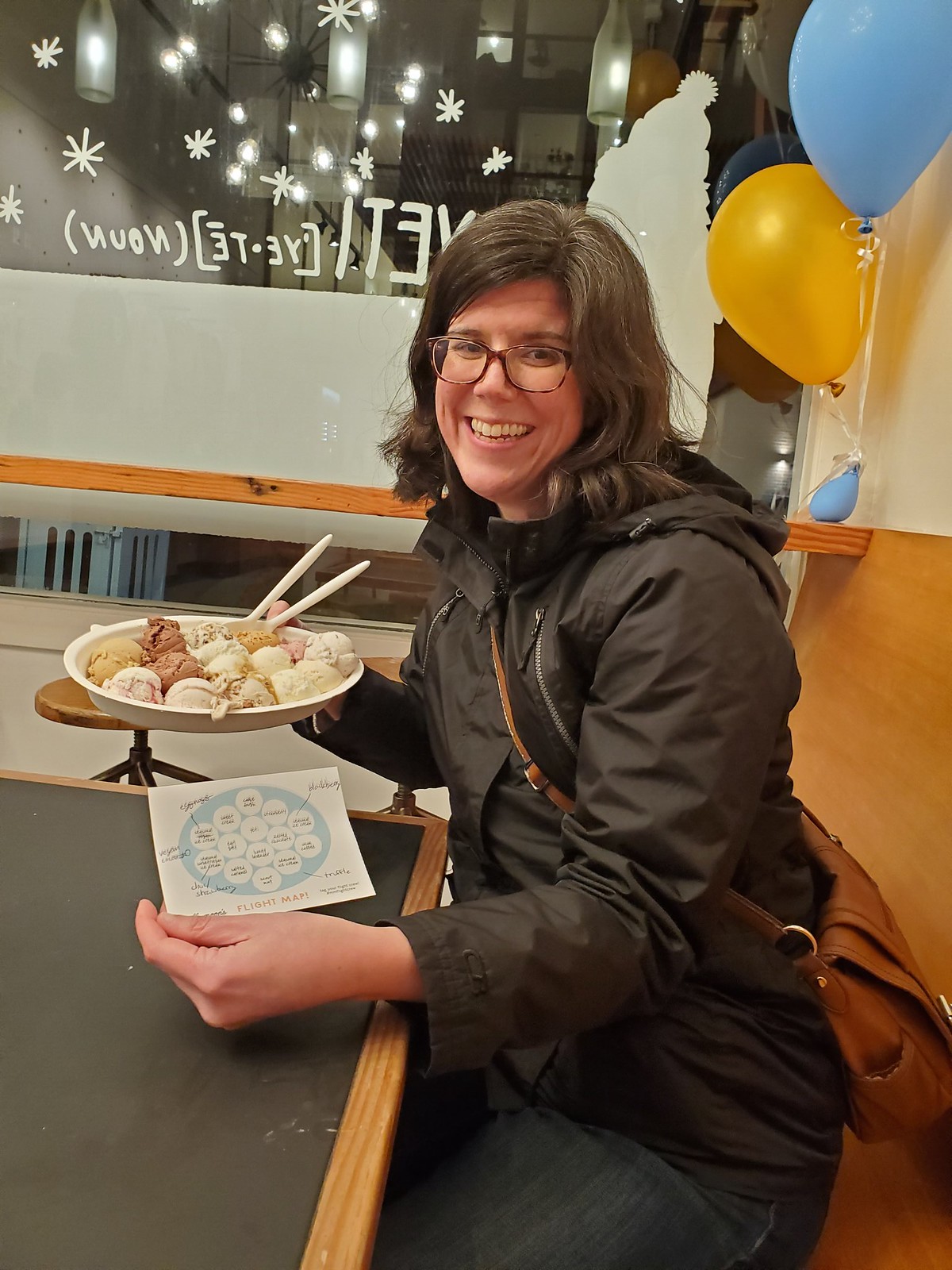 And that’s how we ended our trip, with a metric shit-ton of ice cream. Shortly after we gorged ourselves we returned the car and made our way to the airport to fly home. It was a fantastic trip and certainly counted as a big adventure. Please peruse these pennies and view the rubric below. 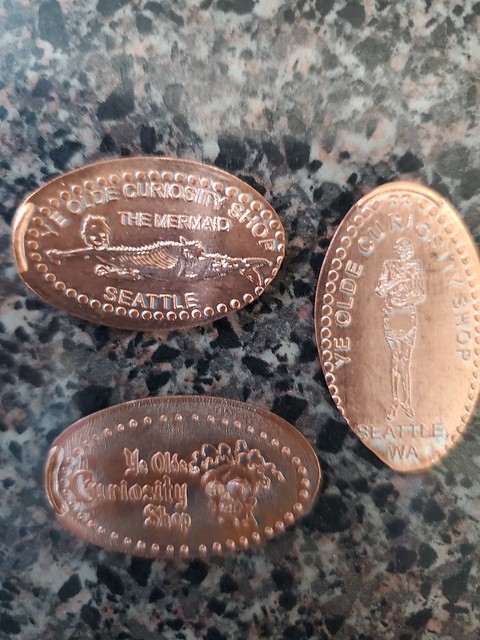 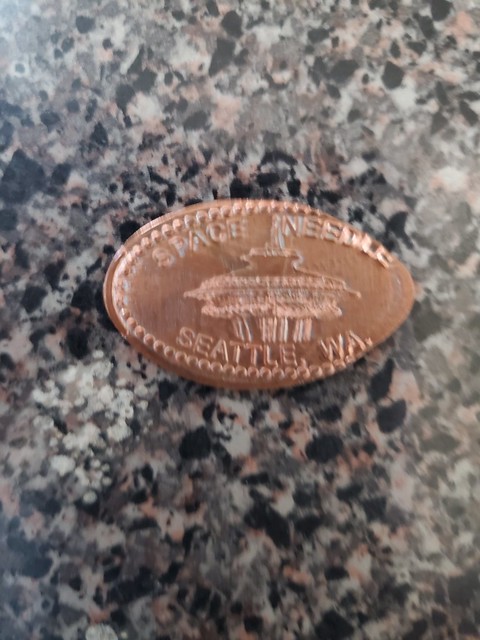 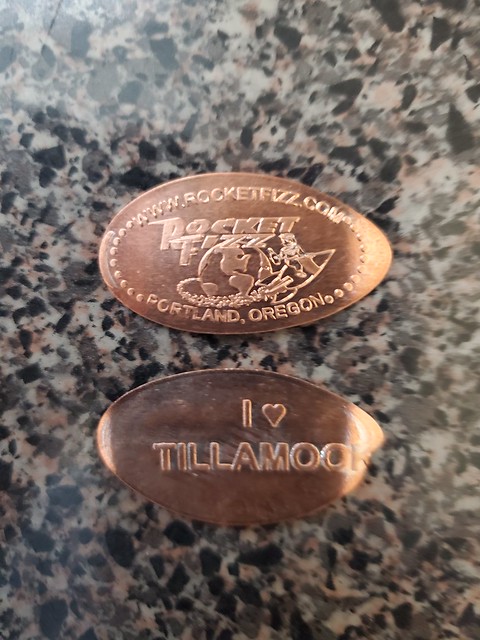 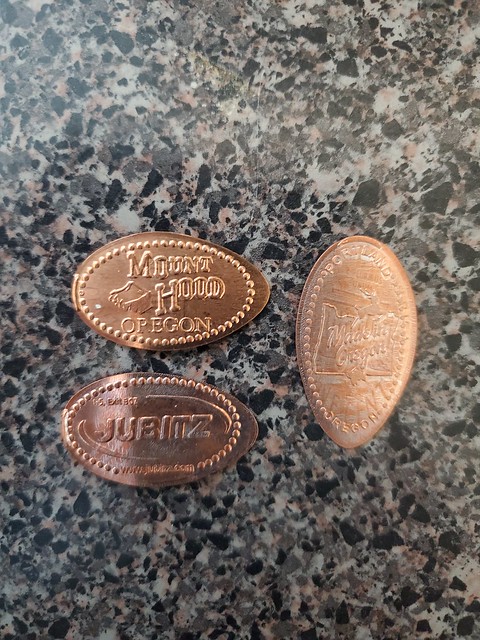 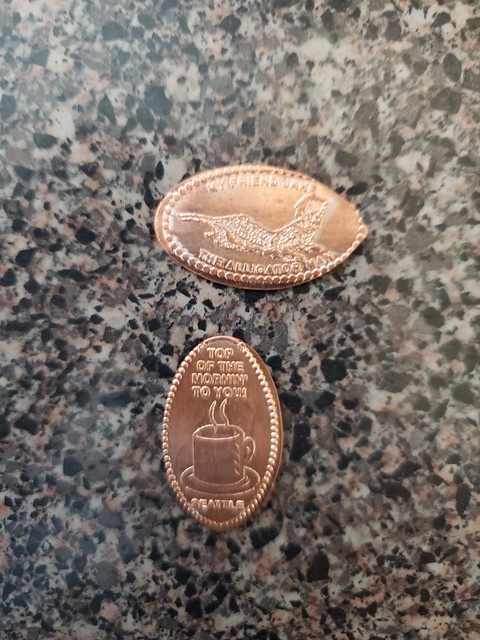 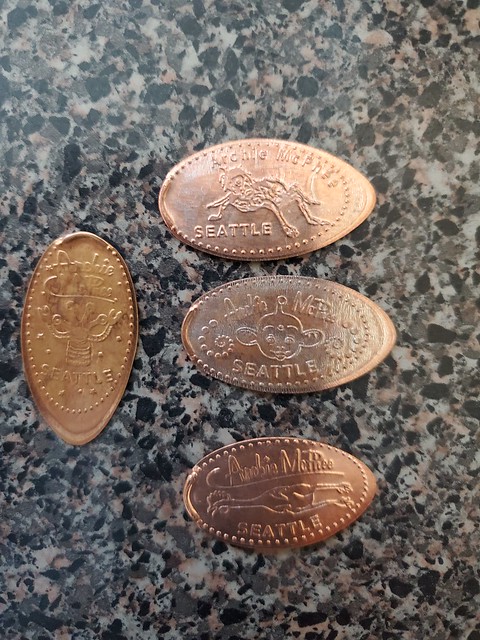 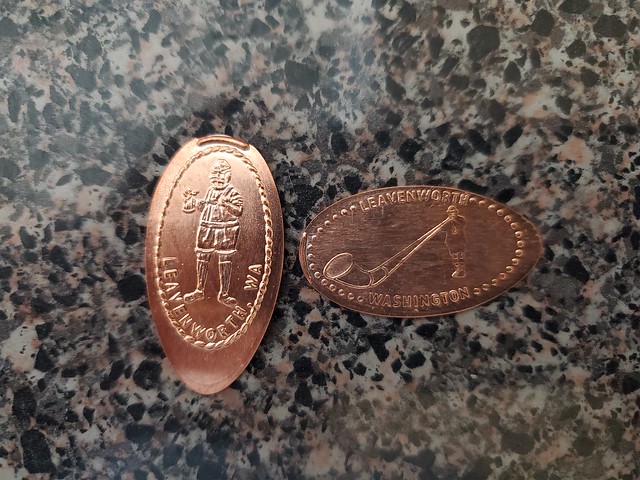 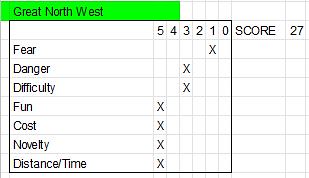