Dag yo, this is a lot of posts about 1 trip! Writing these is a flashback to the trip that started this blog. I figure cutting it up and filling it with pictures makes better reading than me typing up a long winded dissertation debating the relative merits of the Mystery Hole vs. Mystery House. Maybe that’s what I should be writing. Maybe I could get a degree from Oddball University. They do seem to have similar missions and visions for their lives to the ones I have. I need to reach out to them. Until then, dear reader, silly sites and pictures are found in this post.

For our morning diversion, we drove to the Tillamook Creamery for a factory tour. It was small but interesting. In the tour you overlook the working floor where the cheese is made into huge blocks, then cut down into smaller blocks, packaged, and ready for distribution. The employees were efficient and the entire operation worked flawlessly. It was also a bonus that we could taste a few different types of cheese…and with no one watching the samples we tasted them a lot. Below shows a picture of a happy Jen. Why is she so happy? She knows she’s getting fresh ice cream for breakfast. 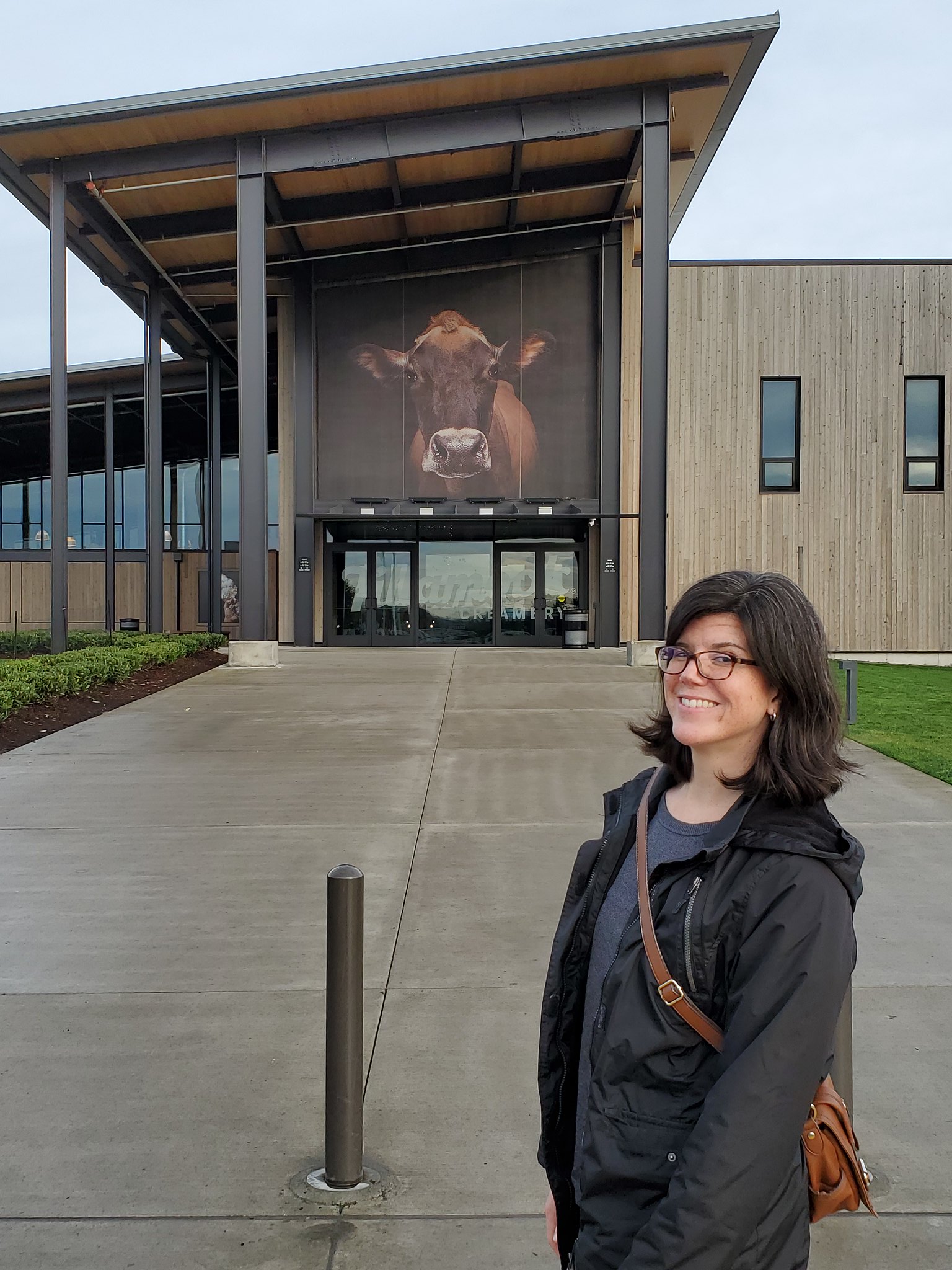 To continue the dairy theme, we drove a bit out of town where I had it on good authority that there was a cow bench. Look at that picture below and tell me that isn’t a beautiful bench! It’s got art, you’re being caressed by a cute cow, and it has a nice view of the courthouse. Unfortunately that lady was there smoking and she didn’t look very friendly. In fact in that picture she’s throwing shade at a guy walking by. I didn’t think Jen taking pictures of me sitting on the bench next to her would make her any friendlier. I took this stealth photo and scooted on. 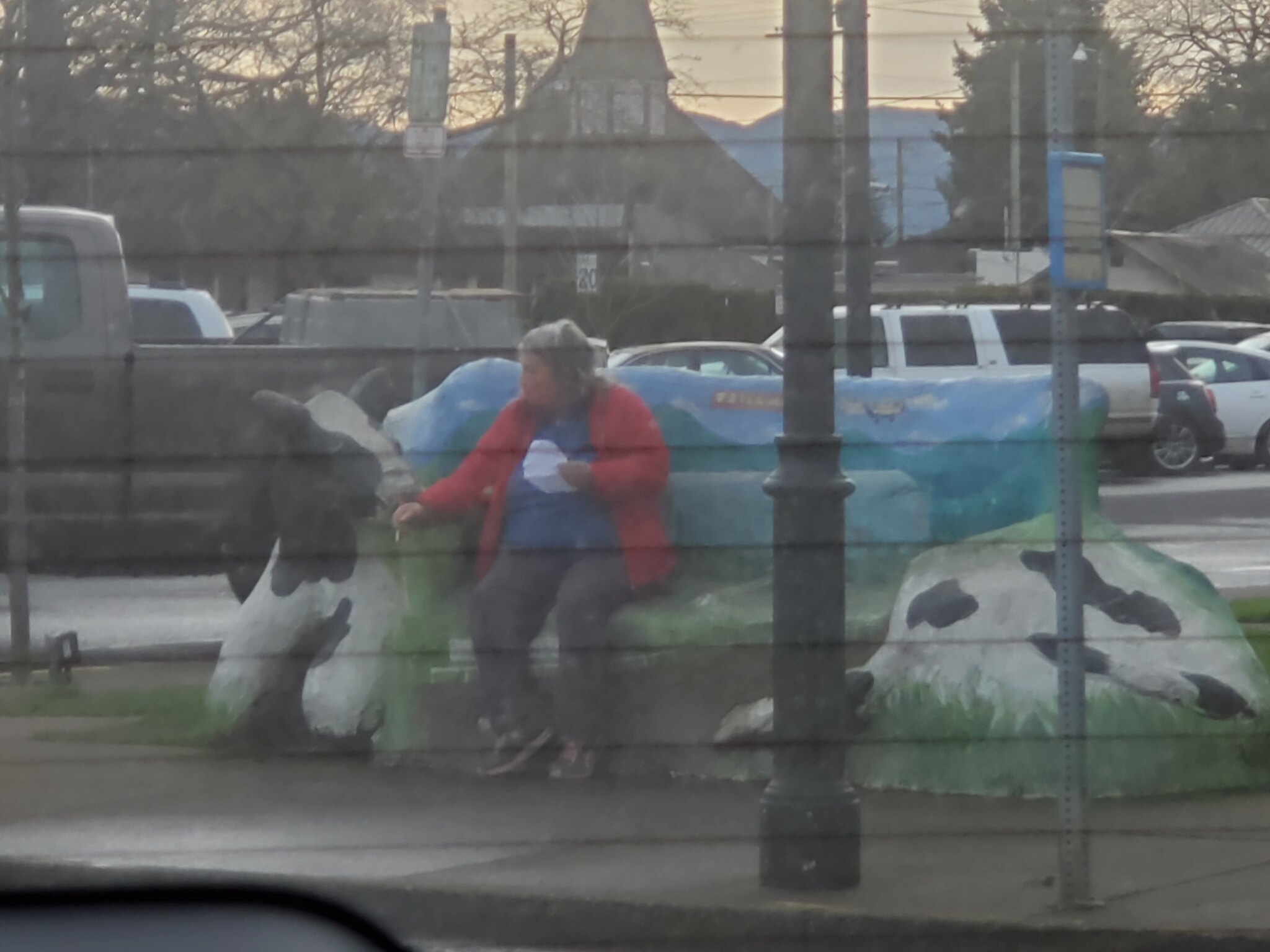 We had missed corn dogs and a cow bench at this point. Also the wine tasting place in Astoria that says it’s open 365 days a year was closed the two days we tried to go. Our spirits weren’t dashed but they certainly could have been higher. We saw a sign driving to the bench for a wine and cheese tasting place with a petting zoo! Hell yeah! Unfortunately they were doing inventory and weren’t attentive to customers at all. We lingered in the wine tasting area for a while before leaving dejected. Outside I was able to pet a few animals, including a chicken!, but the machine for animal food wasn’t full. I did get this picture of me being a jackass though. 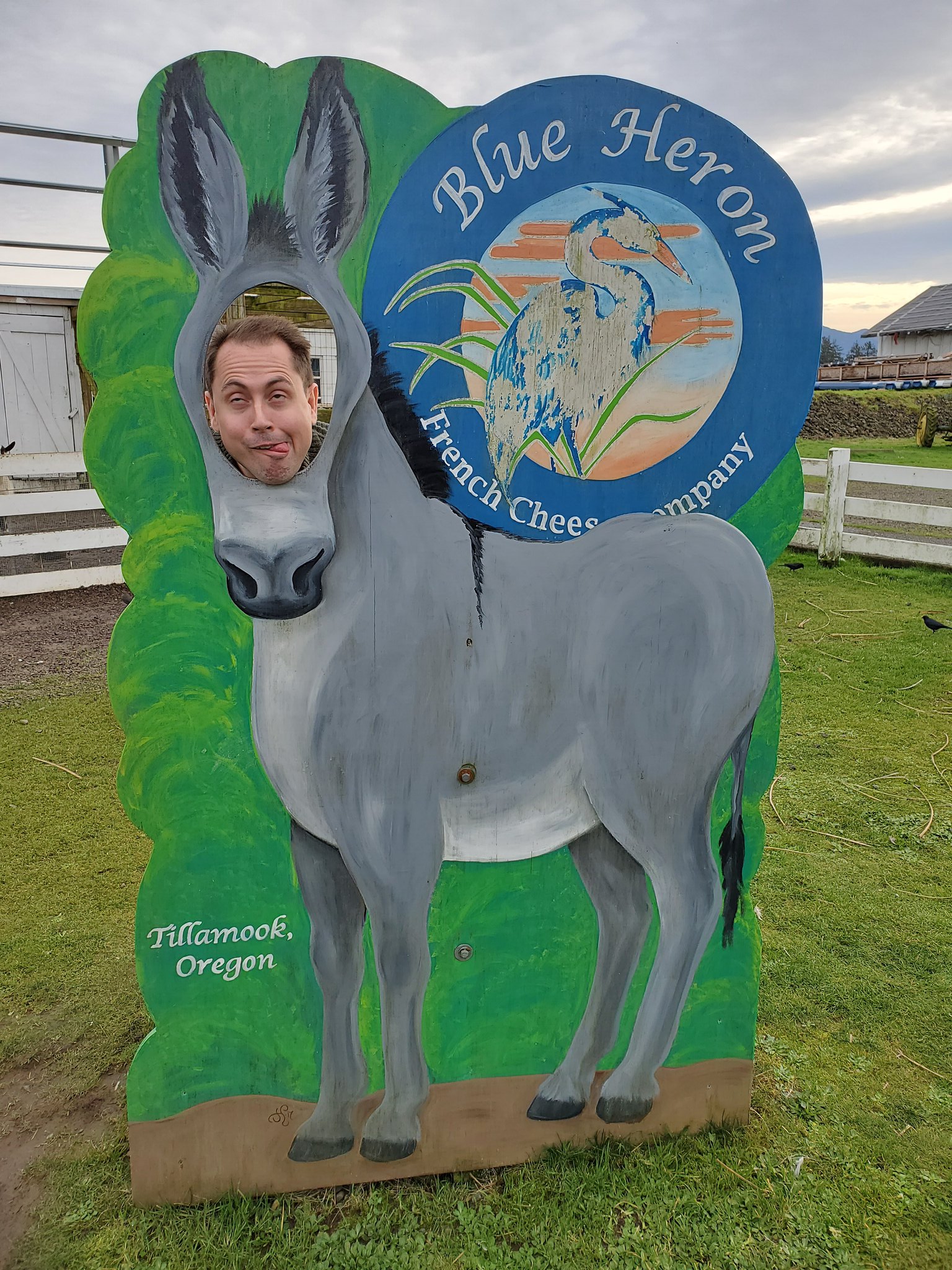 We stopped a few times on our way to the Octopus Tree just because the shore line was so beautiful. I don’t live far from the beach but it’s a different sight from the Washington/Oregon coast. The waves were higher, the water was bluer, and Delaware doesn’t have cliffs to crash into. 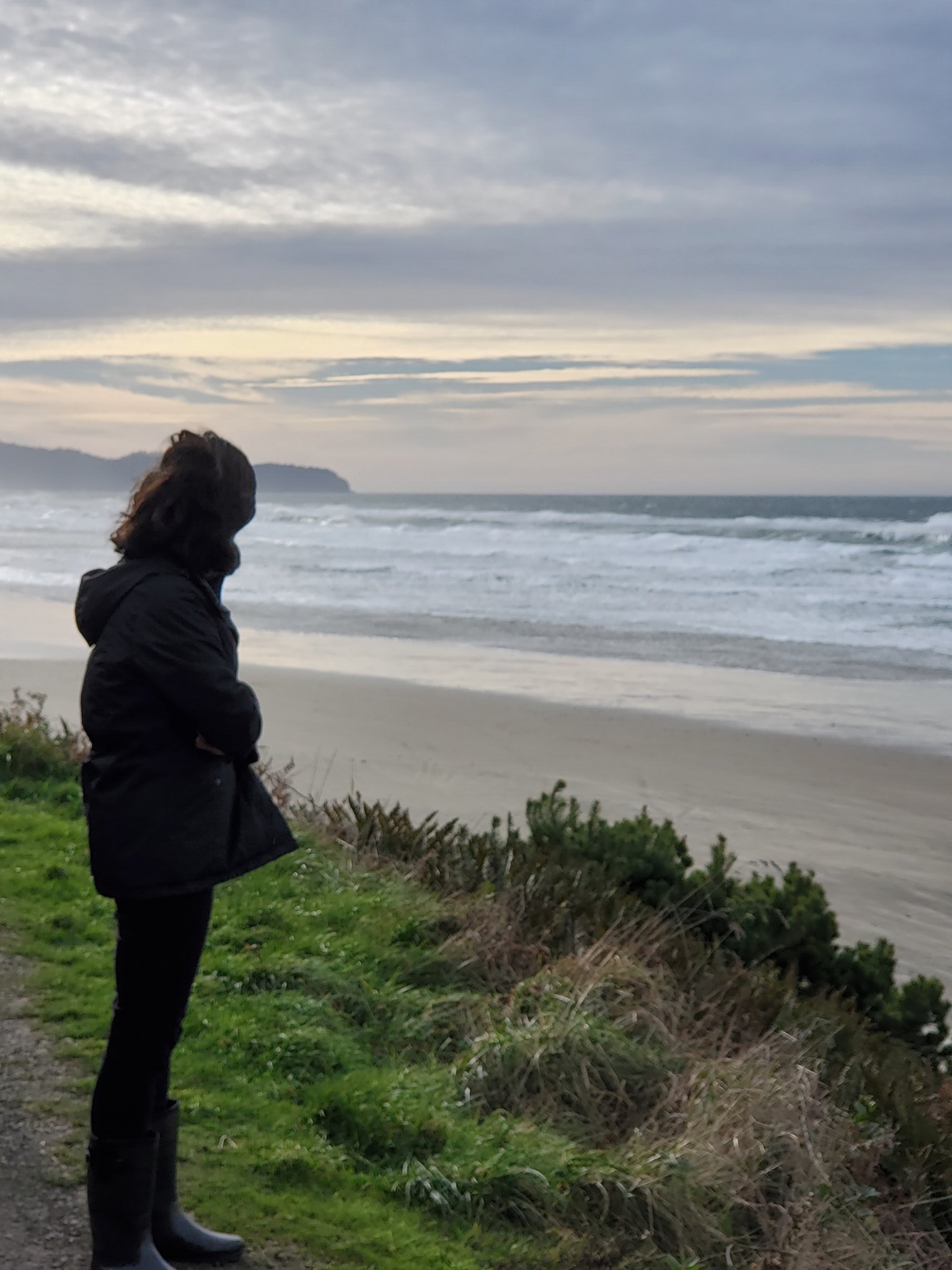 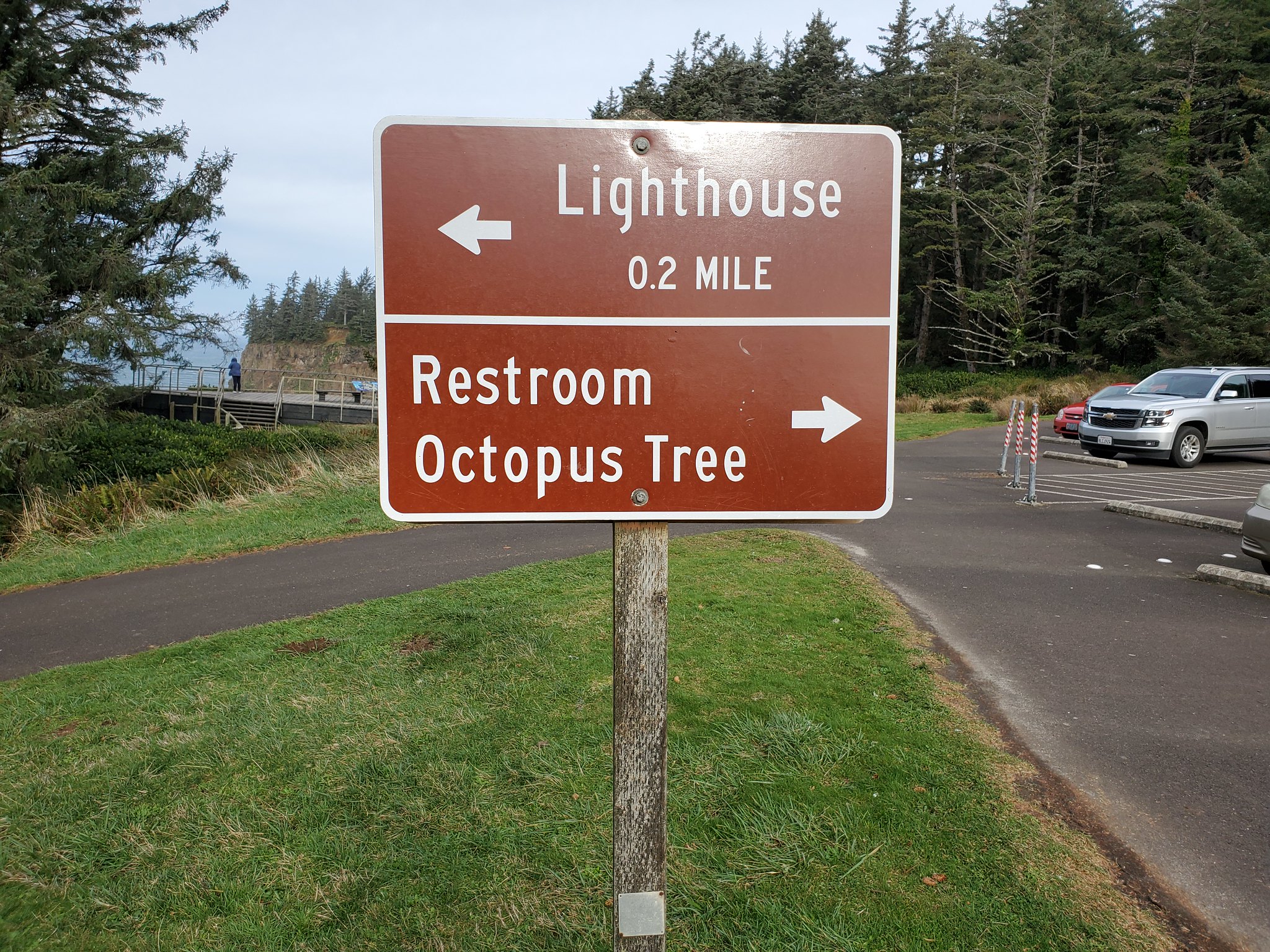 The tree is estimated to be between 250 and 300 years old. For perspective, it was growing before Lewis and Clark were born, let alone their expedition to this area. It may have been a solid few decades old at the start of the U.S. War of Independence.

It’s 105 feet tall and the limbs extend up to 16 feet away from the tree before they curve up. It got its name because it has no real central trunk. It’s a mystery why it grew this way. Theories range from nature to interference by Native Americans. All I know is Jen was ready to do combat with the Arboreal Kraken. Damn, they should name it that instead of Octopus Tree. 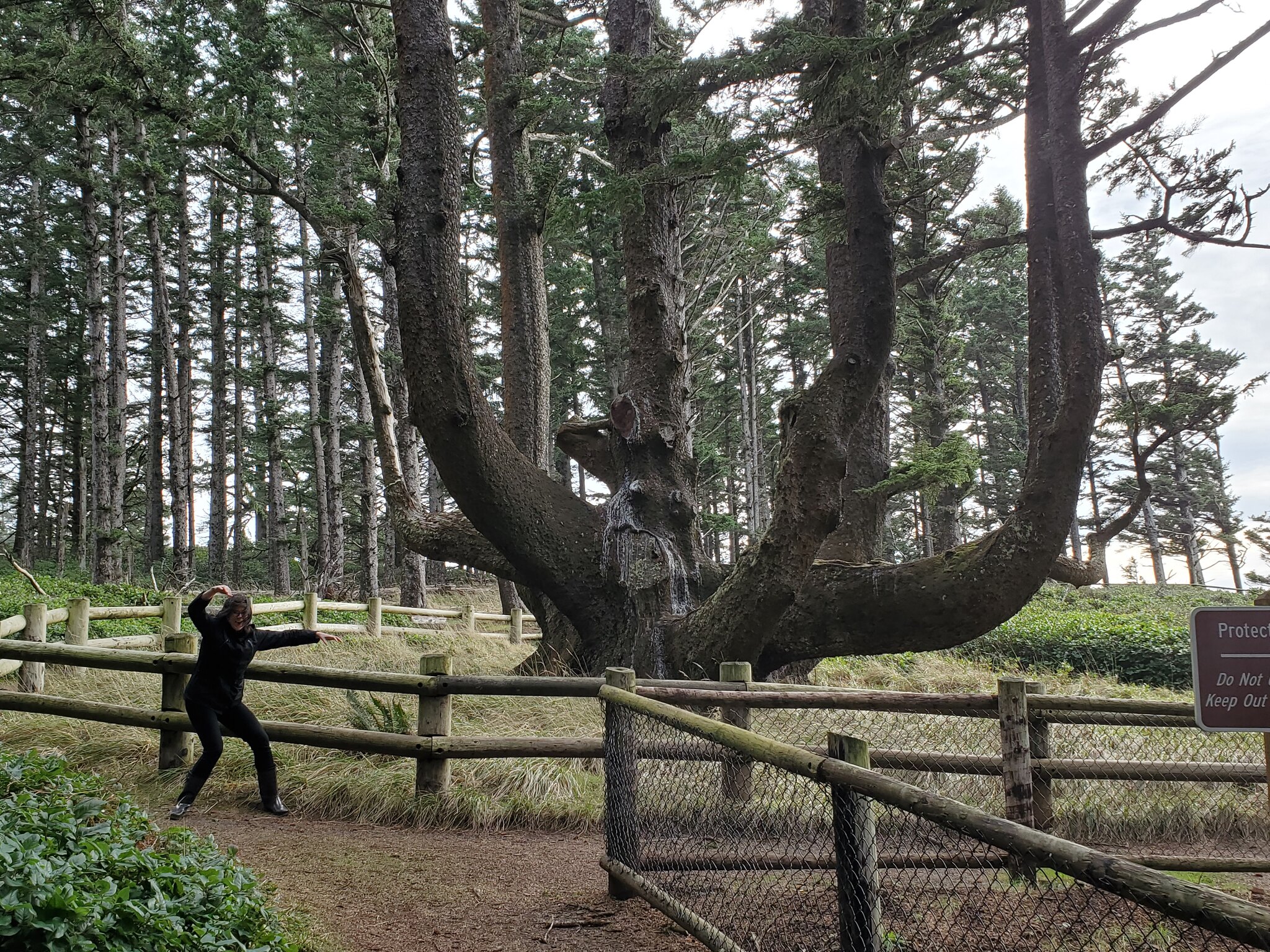 Down the way along the sea line was a squat lighthouse. I’ve never seen one so short. It just doesn’t seem as majestic as a lighthouse should. I’m not sure how many, if any, ships it actually saved but as a guy who isn’t tall I applaud its efforts. 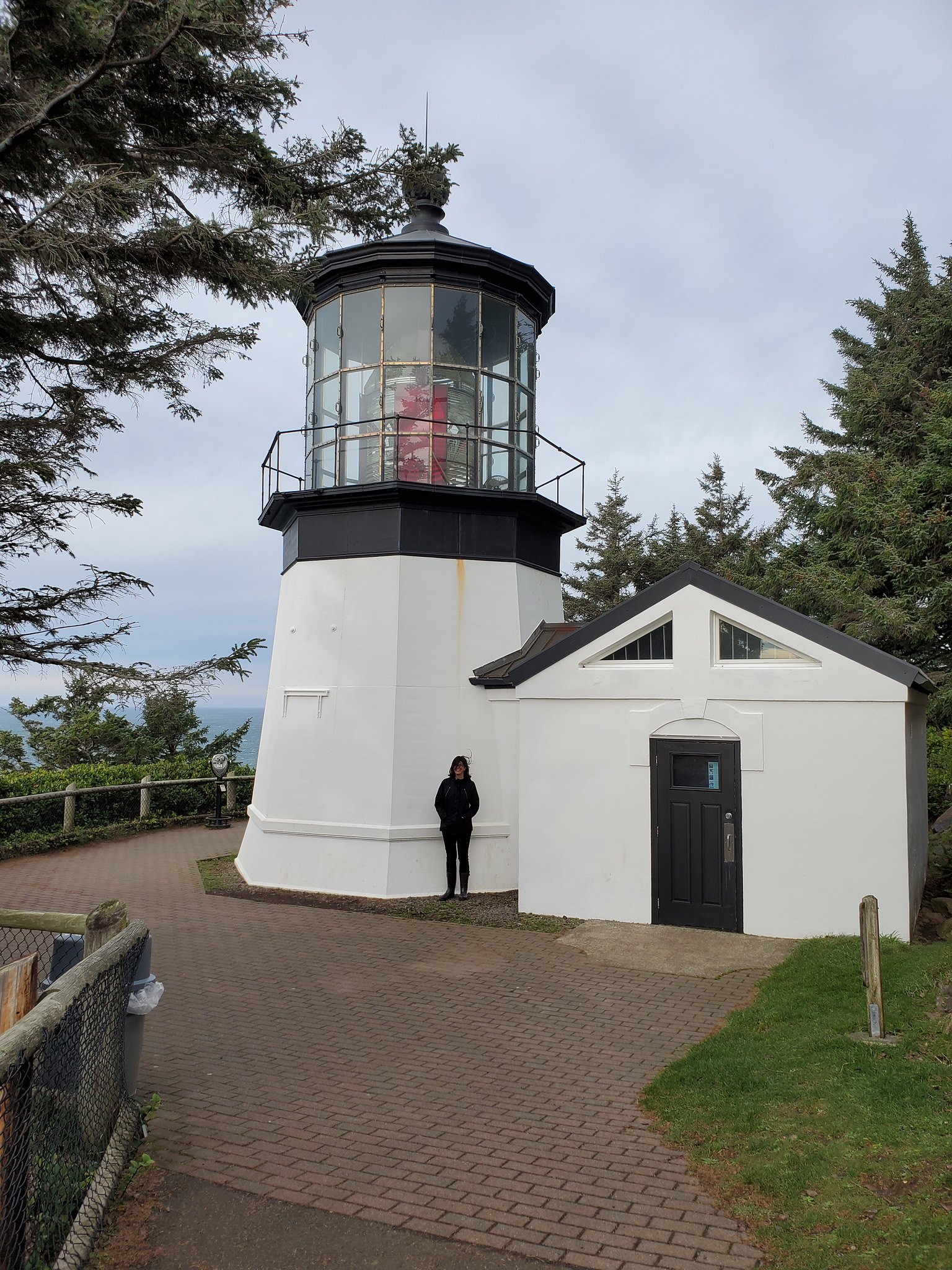 On our way back to Portland for our first night’s stay with Jen’s friend, we drove a long highway through a State Park. It was beautiful and followed this fantastic river. After a while I had to wake Jen up and pull over and climb down to the banks. The water was freezing cold and clear. Delaware rivers are the color and opaqueness of chocolate. This water blew me away. I was proud my clumsy ass didn’t fall in when I climbed out to get a handful. 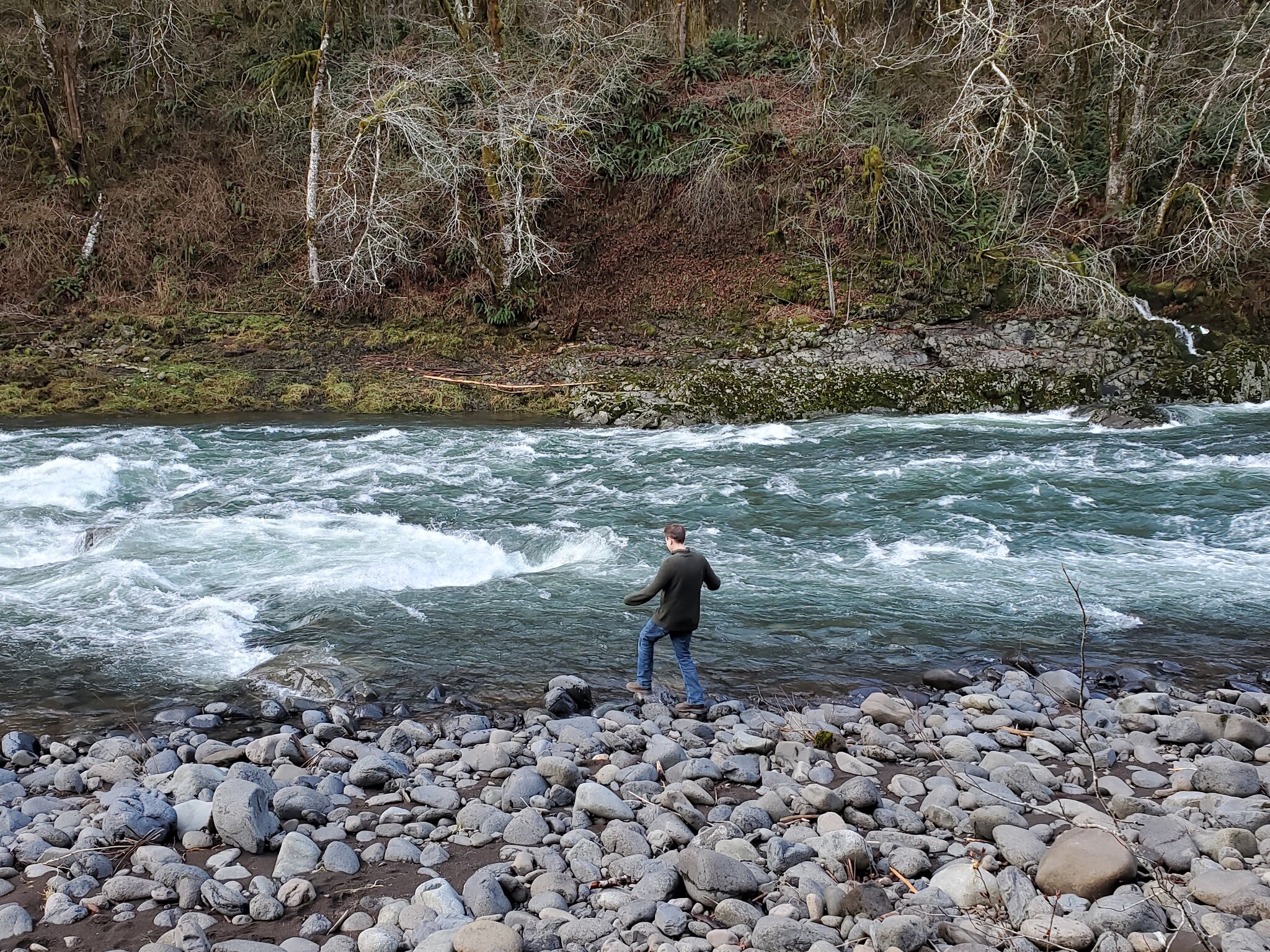 We stayed with Jen’s nice friend for two nights with the plan of ending day 8 having weird dumplings at a vegan restaurant. I’m not a vegan so I was skeptical of the food (I shouldn’t have been, it was fantastic!). In the morning we went to a farmer’s market to pick up some fresh fruit and veggies and spied pierogies, a favorite food of both Jen and I. It was decided then and there that it would be dumpling day. We figured we owed it to ourselves to have 3 meals consisting of dumpling-like food. I didn’t get a picture of the pierogies we split before we ate them, so here’s a flattering picture of Jen enjoying the last one. 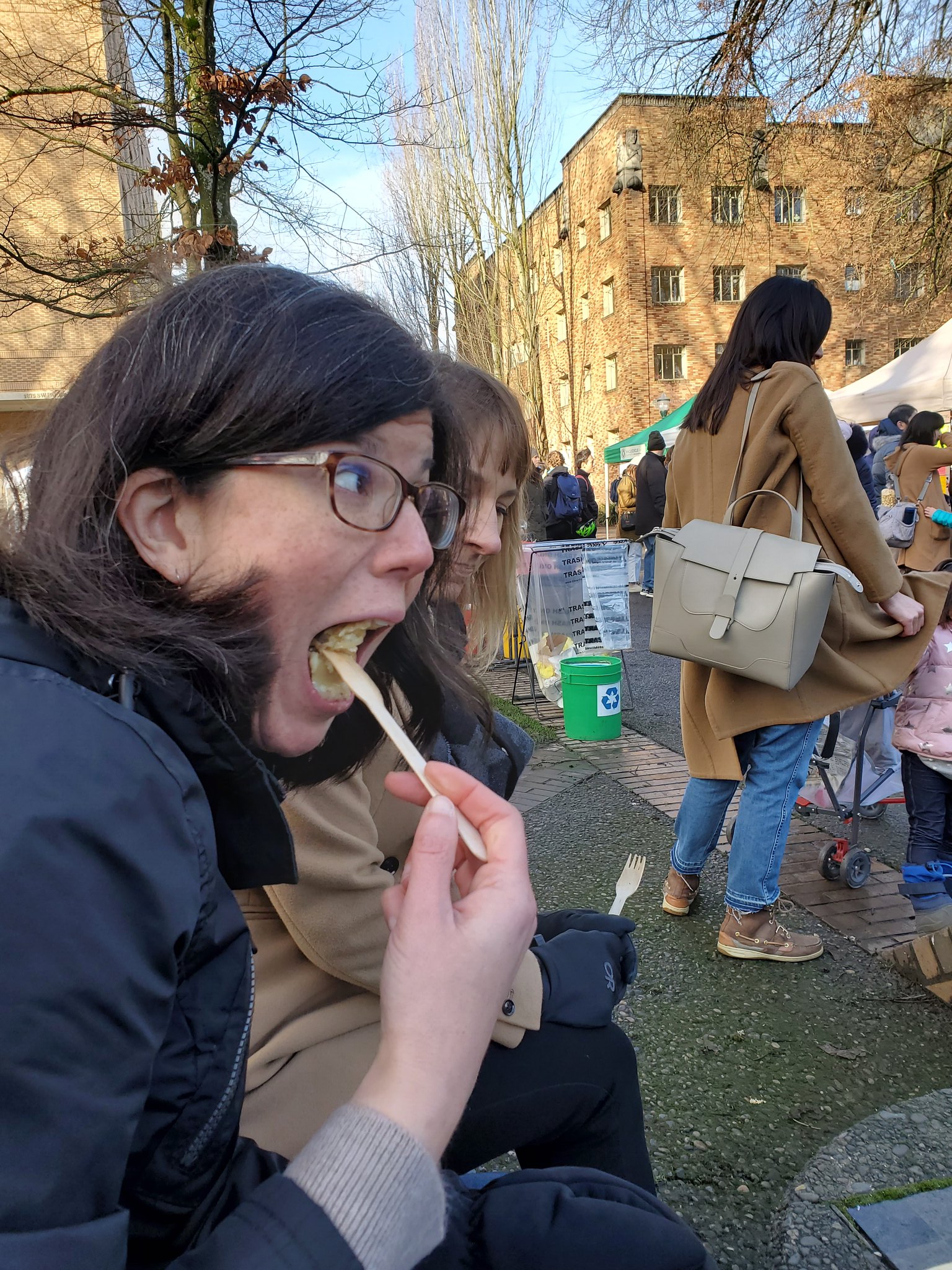 My priorities aren’t the same as most people. After walking around a bit we went to a lovely, large Portland art museum. We spent a large part of the day walking its many floors and two-connected buildings. Of this art museum, I have zero pictures. What do I have pictures of? Hippo Hardware! Jen and I left Justine at her apartment to wait for her boyfriend and scooted over to this Smorgasbord of Clutter. It is a functional hardware store with lamps, wires, screws, nuts, and all manner of constructive items. 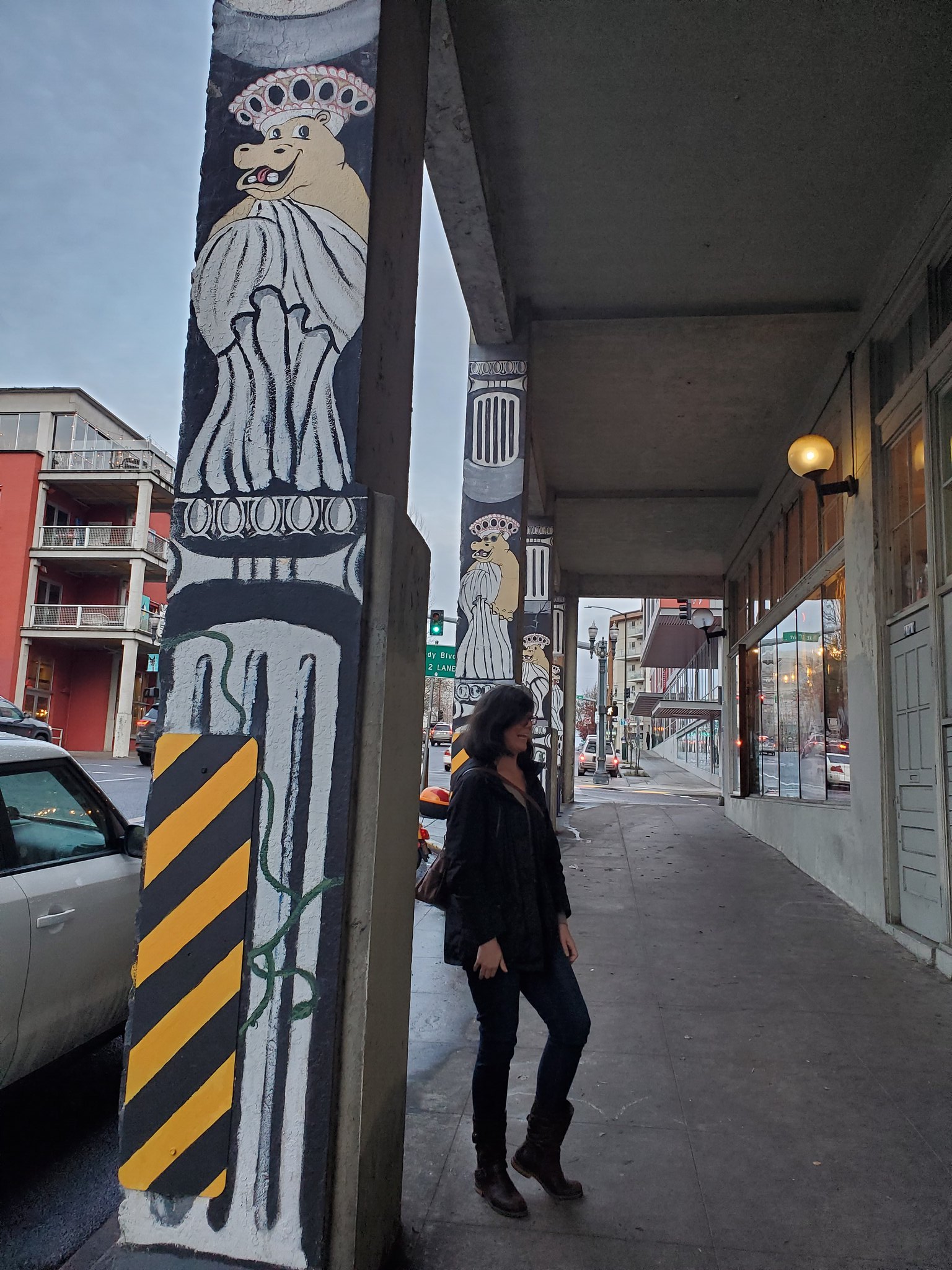 But it’s so much more. It may be the only hardware store in the world with multiple references to Jean Claude Van Damme. It might not, but it’s the only one I’ve been in. 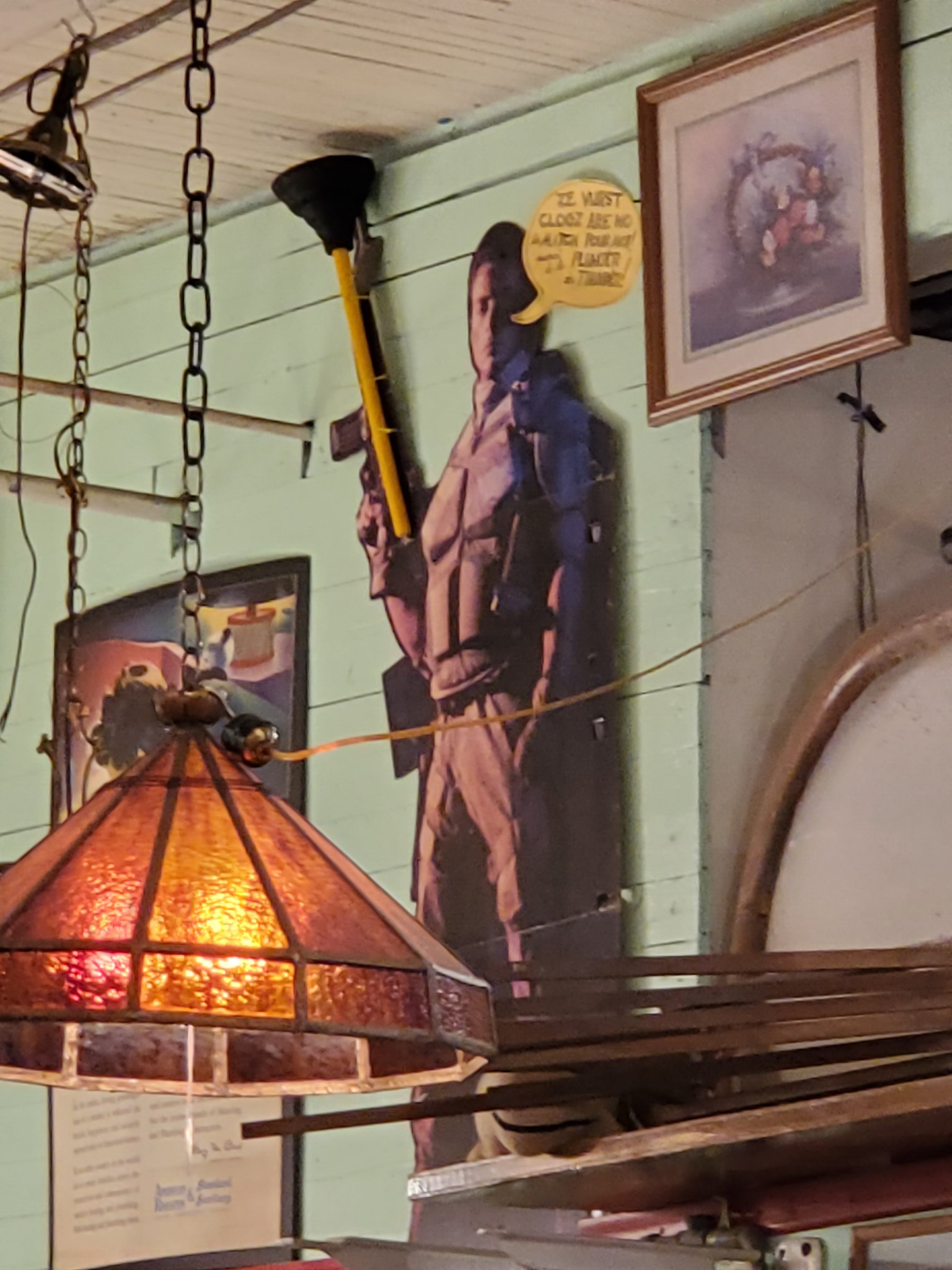 He was all over giving advice to DIY-ers. That thing next to him is an actual shower that you can hook up and use. I mean, if you took it somewhere with connections. You can’t use it in the store. That would be messy and they might not like your naked body scooting around. I like that they had to tape over the toilet to make sure no one used it. 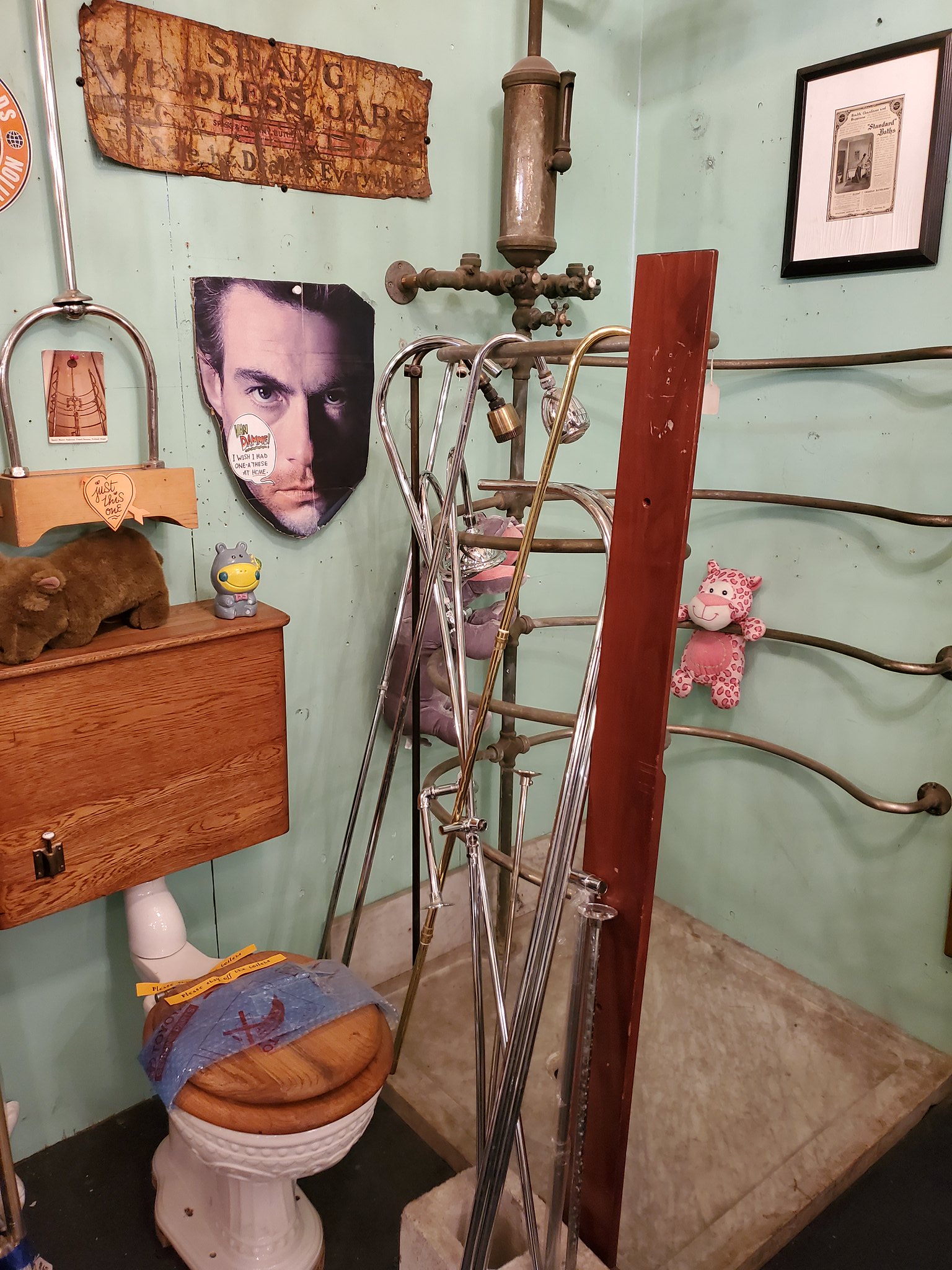 Not only was Mr. Van Damme splattered on the walls, it had old timey signs displayed in unusual areas. This one was on one of the many stairwells scattered through the labyrinthine peddler of fix-it implements and accouterments. 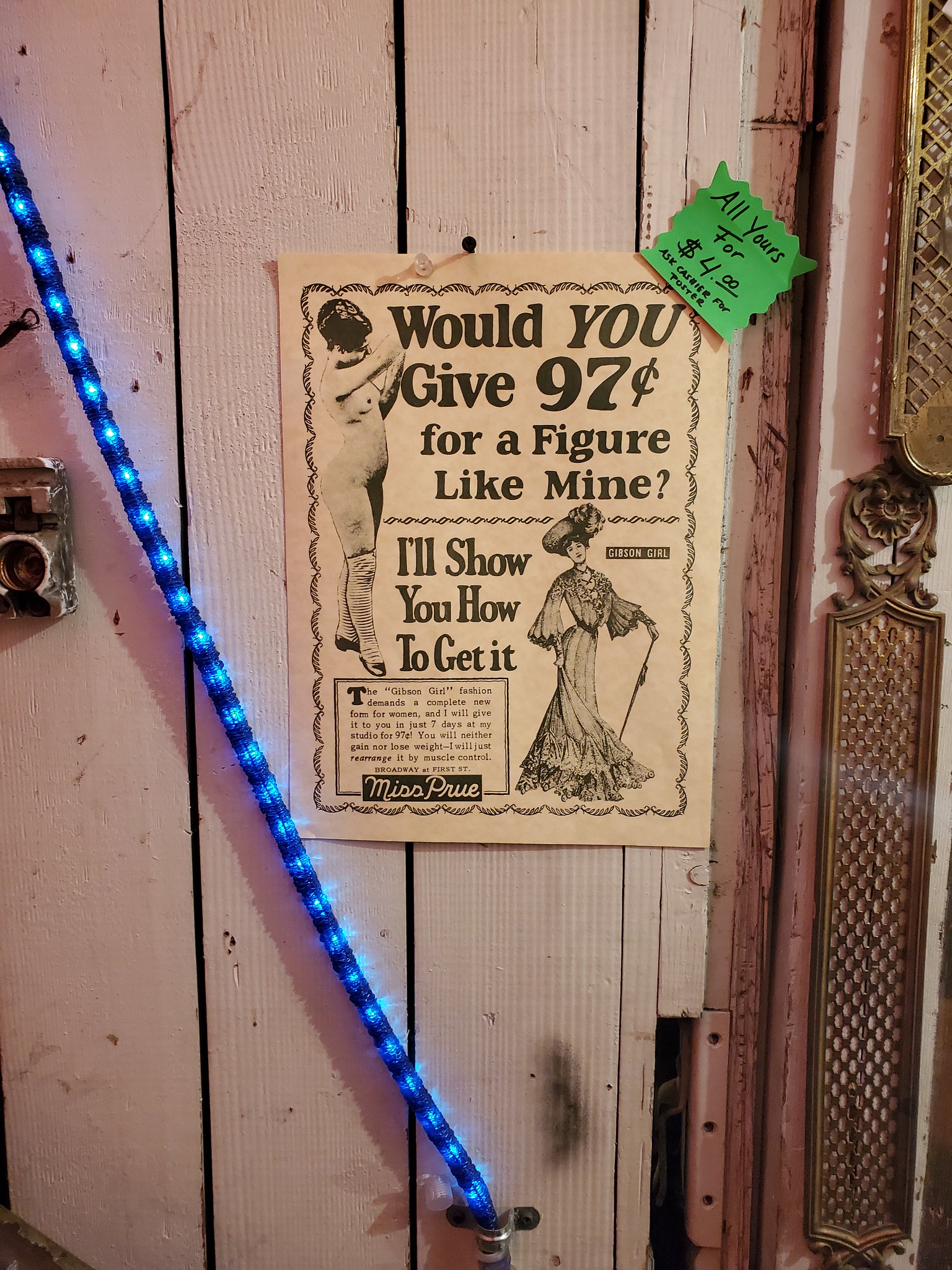 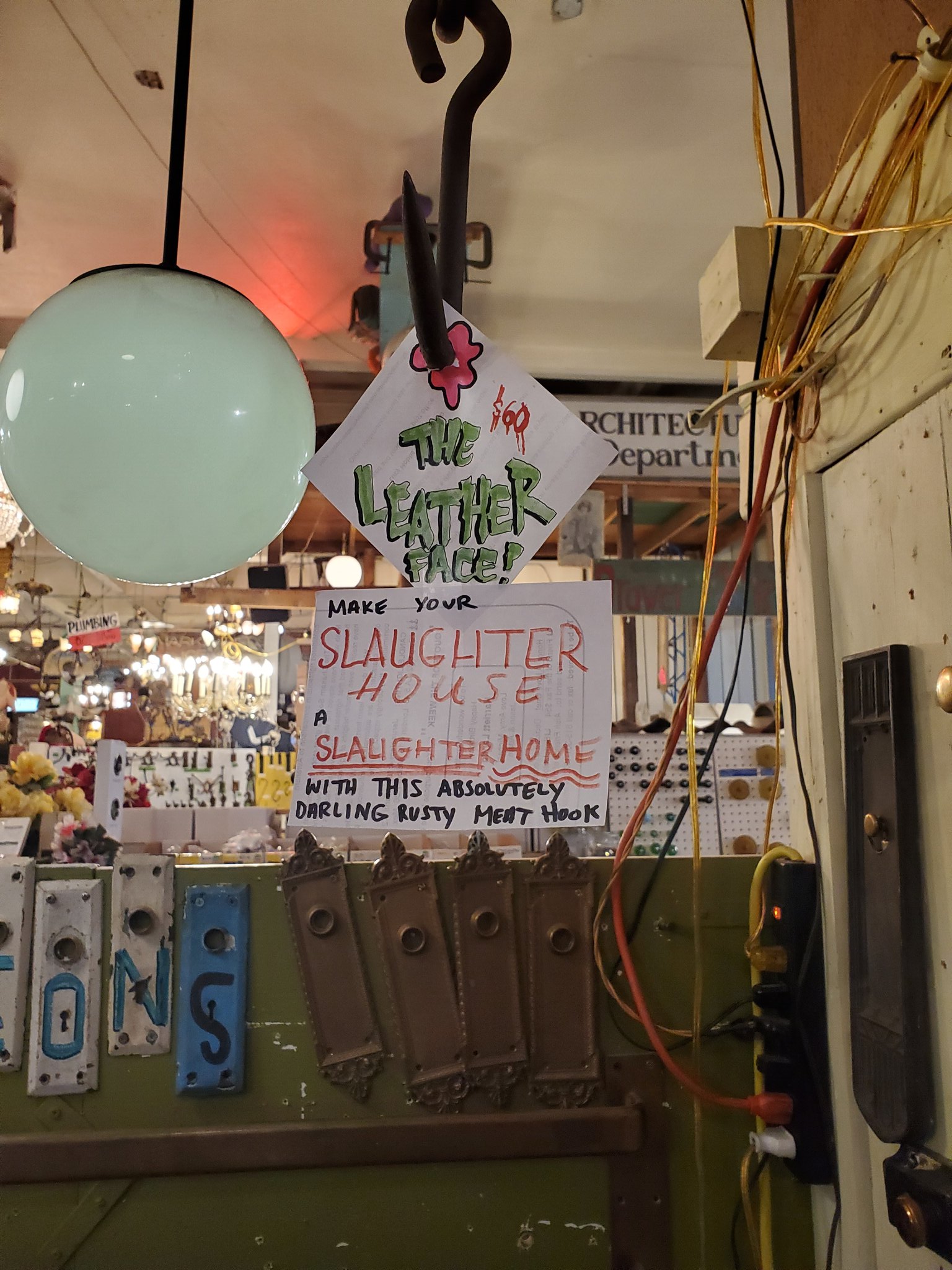 I would love to see people’s houses that shop here. I’m not sure there would be enough matching handles and knobs to cover an entire kitchen. I guess there are people out there with mismatched drawer hardware? I’ve probably met those people on my journeys and never knew it. 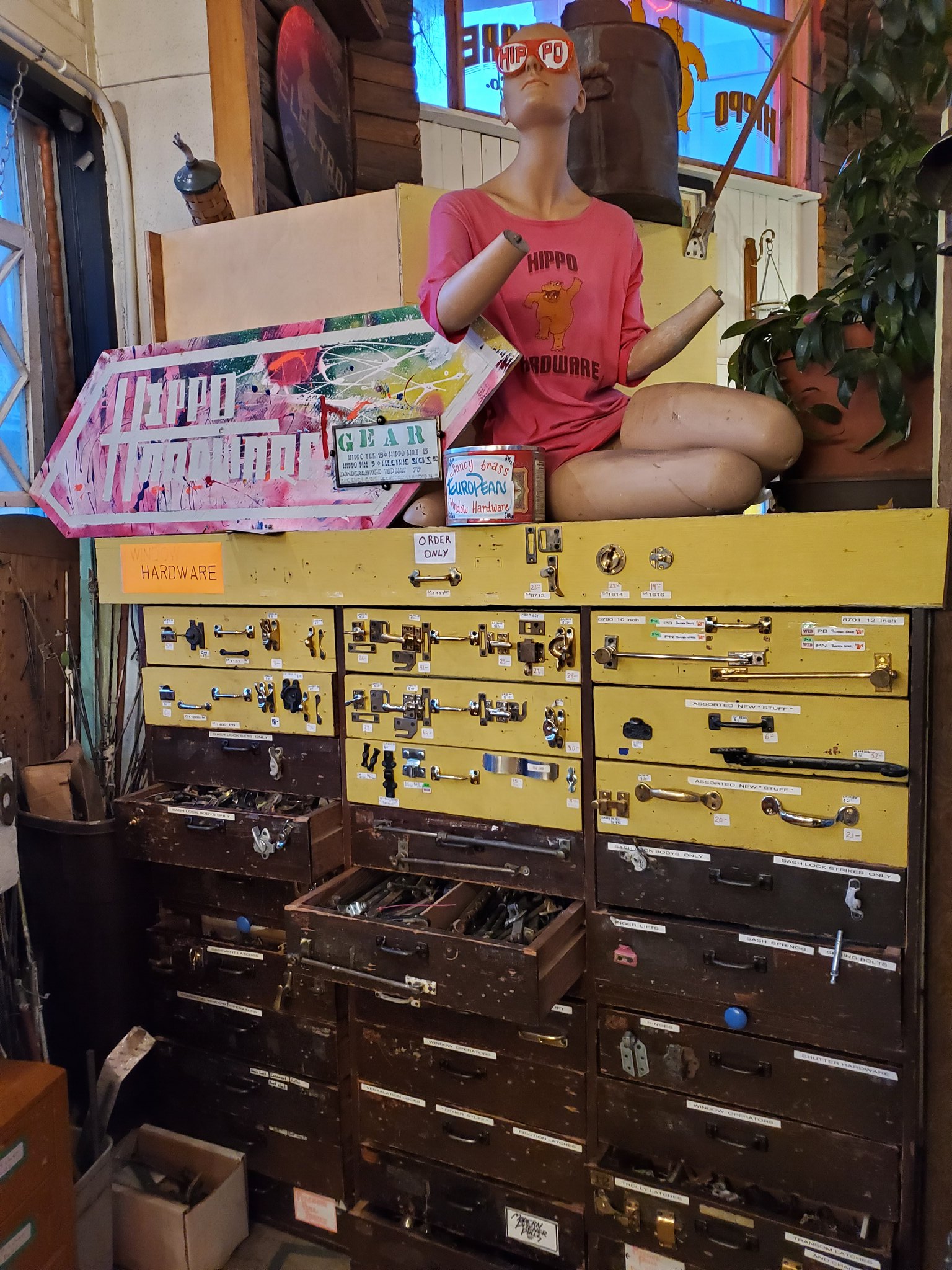 We didn’t make it to our lunch dumpling spot, instead enjoyed some cheese and store-bought dumplings back at the apartment. Although we didn’t make it to 3 dumpling selling places, I did get to visit the Smallest Park in the World! I had to scuttle into the middle of traffic with everyone staring as they drove by, but I gave this little tree respite from the rain for a few moments. 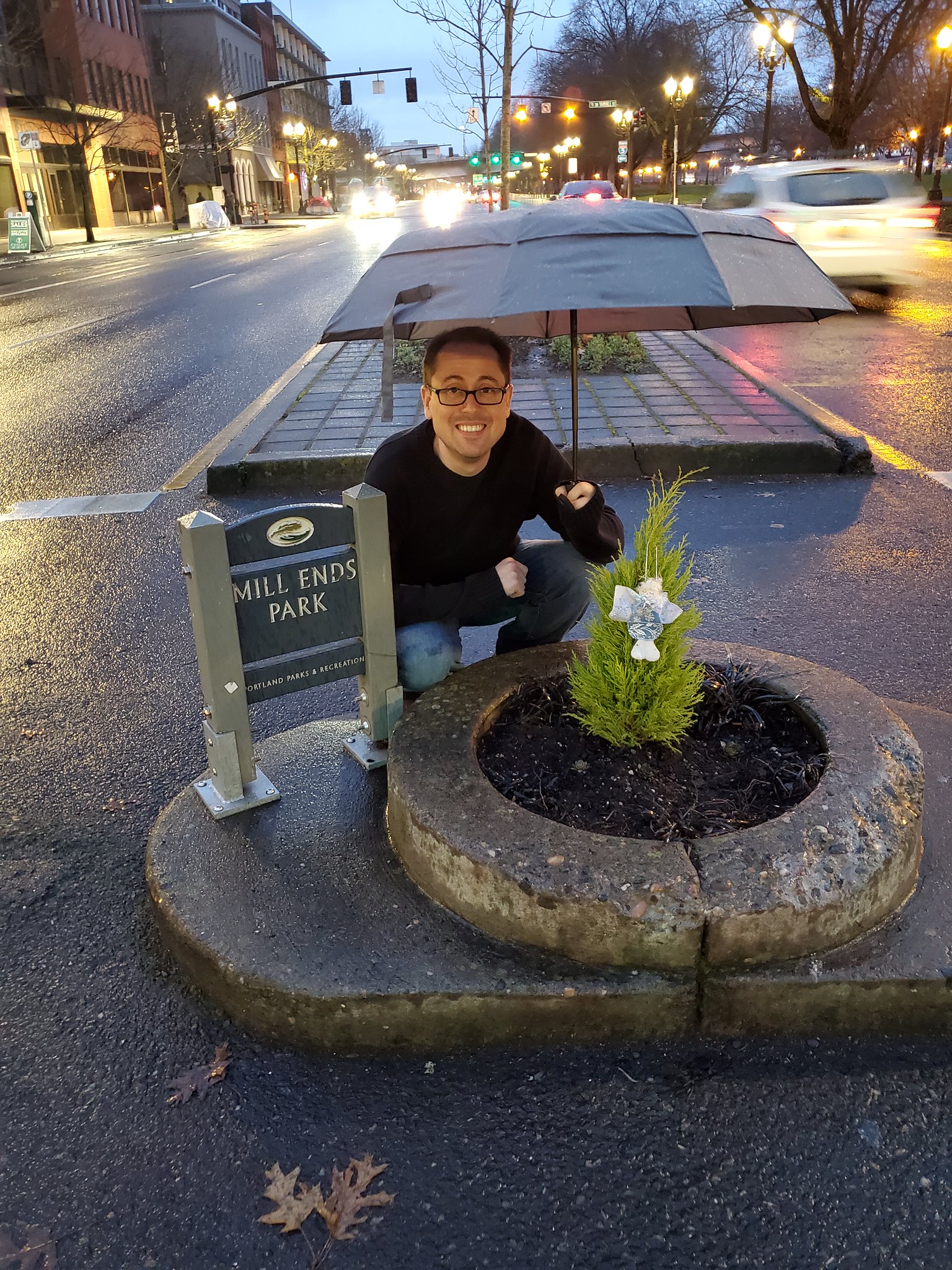 And that was Portland! Don’t worry, the trip didn’t end here. We still have that MAGA Bigfoot I promised in the first post and so many rubber chickens.