This was such a great trip
We saw a big log
But what I really wanted
Was to ride a corn dog.

Please continue to read to understand my poem.

Another rainy day but we’d have been disappointed if we didn’t get dreary, rainy days when visiting the Pacific Northwest. It’s kind of what they’re known for. We’d have felt ripped off if it was sunny. Our first stop was at a weird office park to see a transplanted All-American family. These A&W statues once adorned the fast food restaurants that now have seemed to fade into existence. Instead the family got new jobs at an aquatic and recreation center. I like that all the tired exercisers come out and see giant burgers. 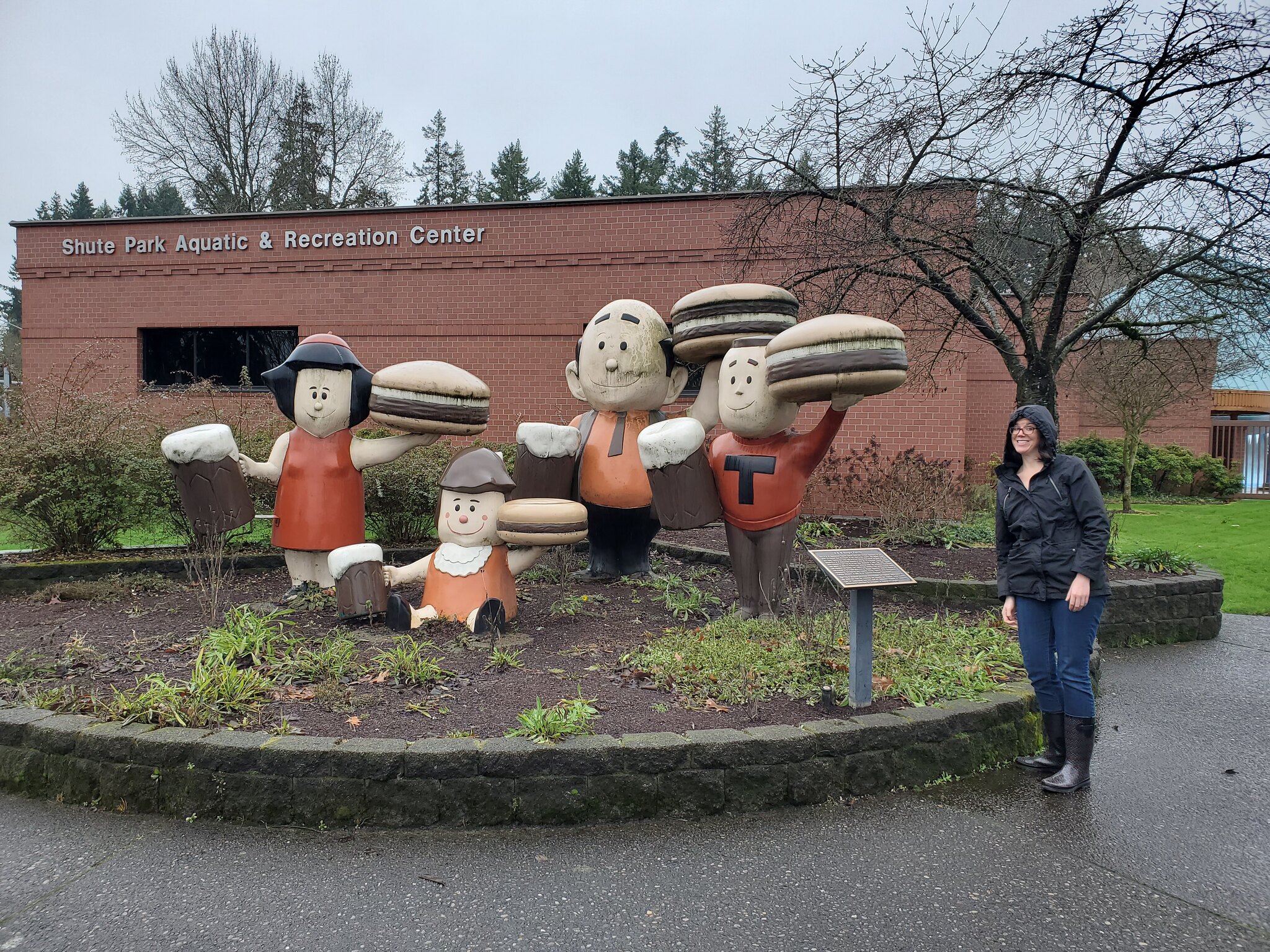 Did you know that the corn dog was invented in Oregon? I did. And did you know that the restaurant is still open and features the only saddled corn dog you can ride in America? I did. Did you know the establishment is only open in the summer? I did not. Jen found out and kindly broke it to me. She watched my heart sink and my dreams wash down the drain.

Our initial plan was to head back out to the coast and see a bunch of sites, culminating in driving two hours (round trip) out of our way for a corn dog and corn dog ride. Upon learning that my lunch would not be an original corn dog we changed our plans and headed east into Portland. To cheer me up we started our day at the Freakybutttrue Peculiarium, a place that’s been on my radar for years. Jen asked this nice guy if it was worth the admission cost. He said it was and we think he was right. 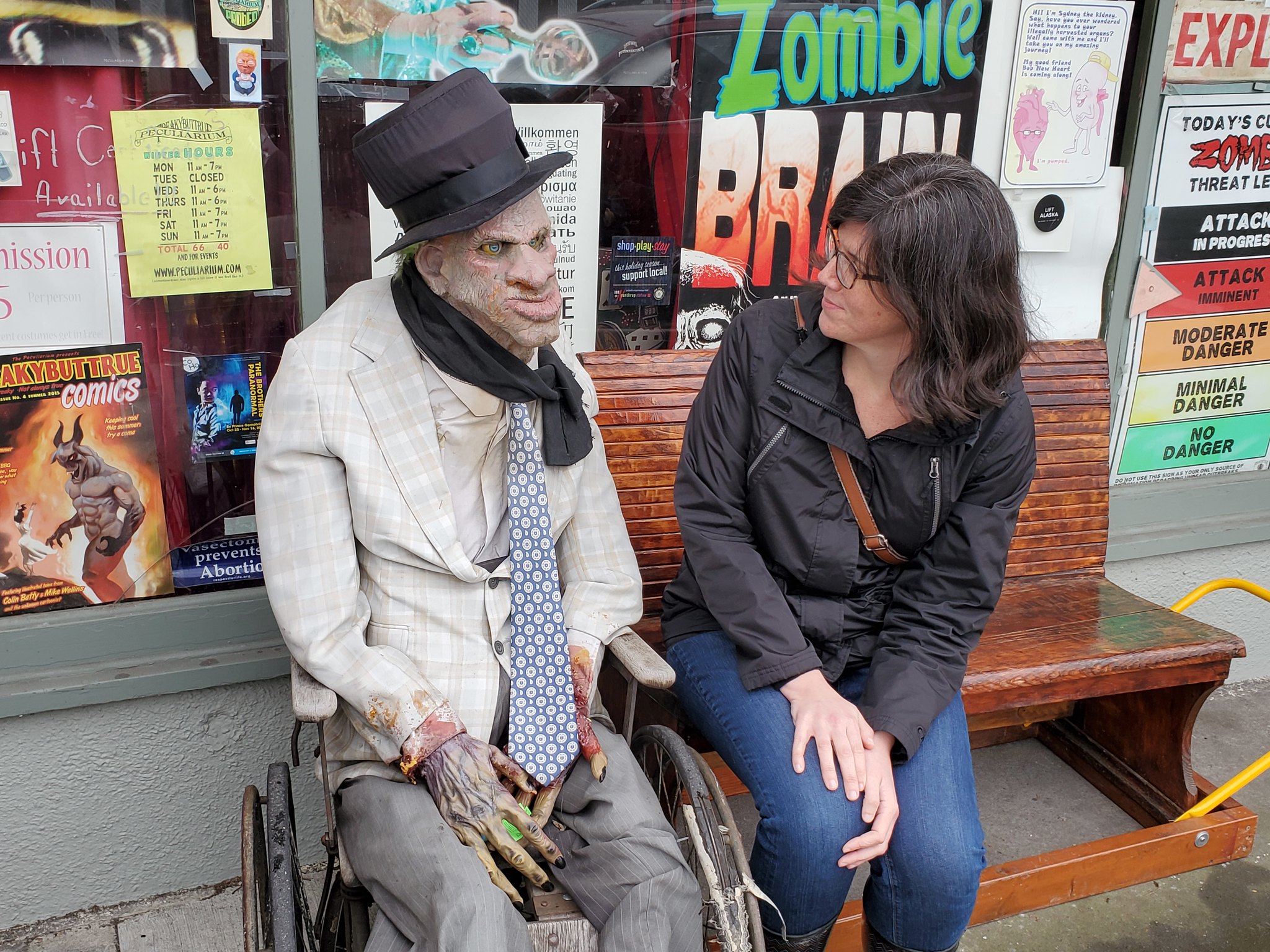 Essentially the Peculiarium is an oddities museum but it features so much more. Local artists display pieces, the gift shop offers a treasure trove of interesting artifacts, and a huge focus on sci-fi, horror, and cryptids. I stood around with everyone else while Jen got the scoop from her new friend. I listened in like a fly on the wall… 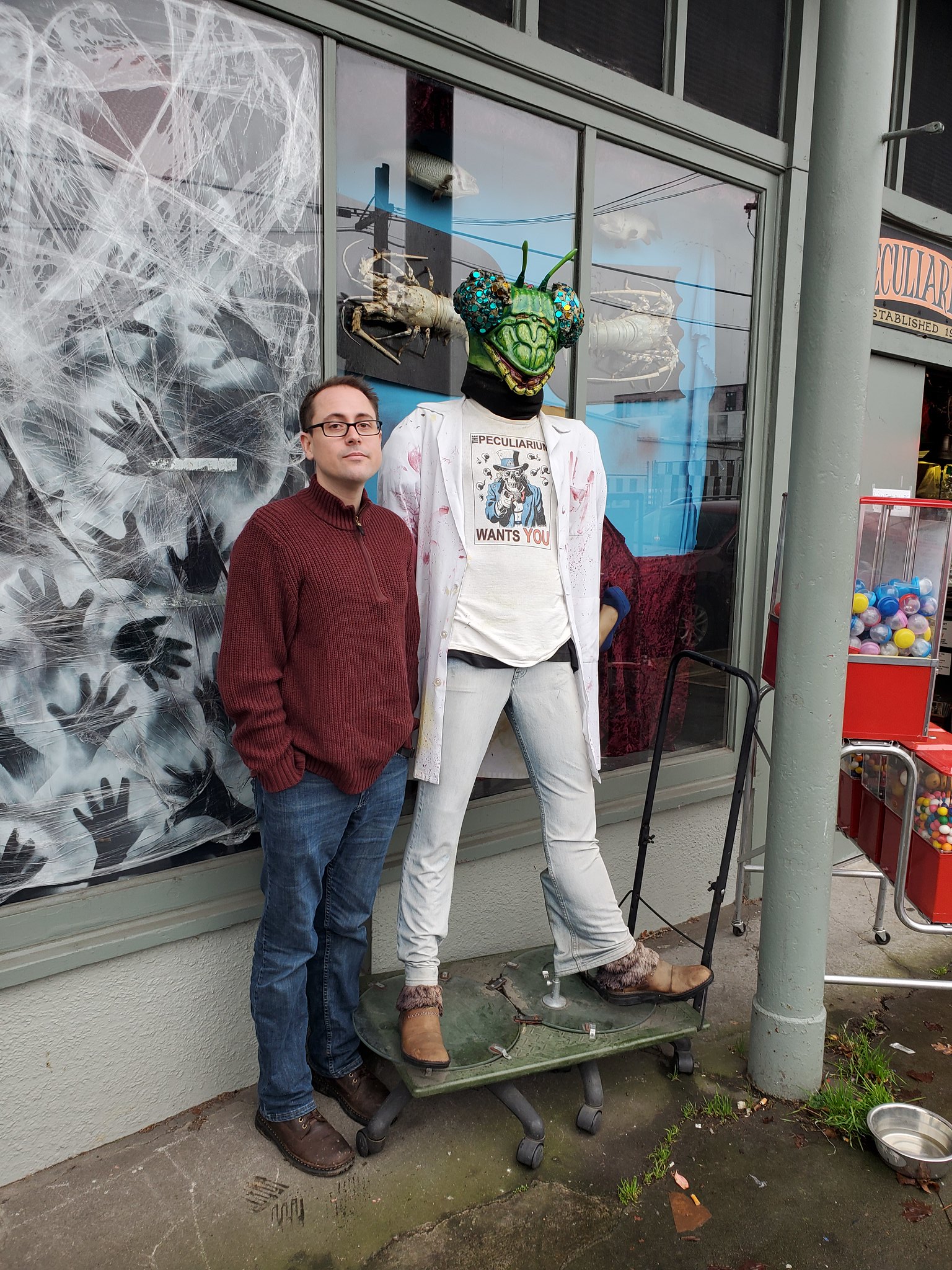 That was a terrible joke but I’m leaving it in.  Also outside was a great $.50 machine! While I think a $.25 gumball is fair, and a pool ball is a great deal, I find that a flip phone is not worth the cost. 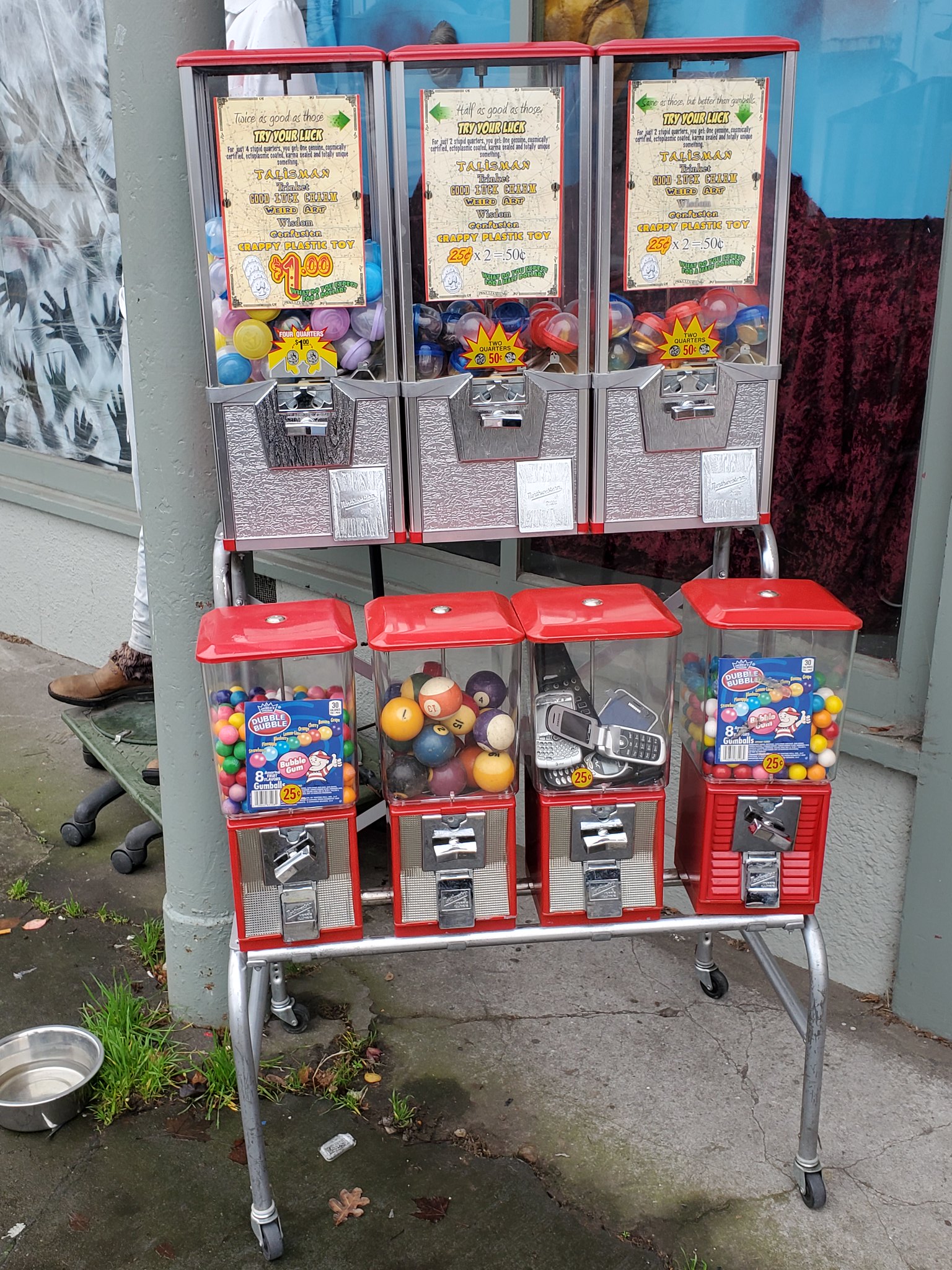 Jen continued to meet nice men. This Krampus asked her for her Christmas wish list but I think it was just a ploy to get her into his lap. He was a dirty old man, look in his eyes and you know I’m right. 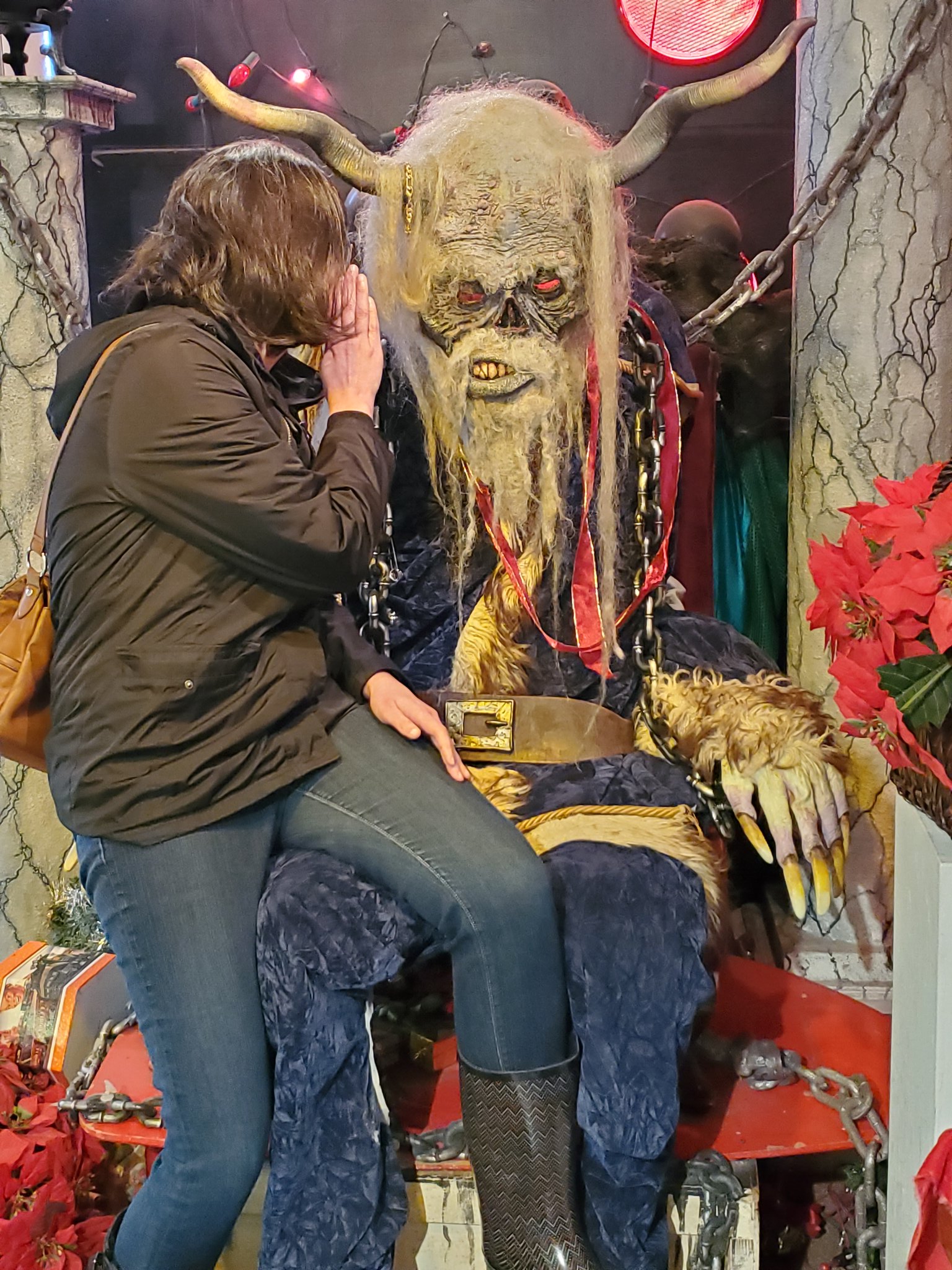 While she was off flirting, I was watching old movies and commercials at the World’s Smallest Theater! There was no sound unfortunately but the “movies” did seem to be entertaining. 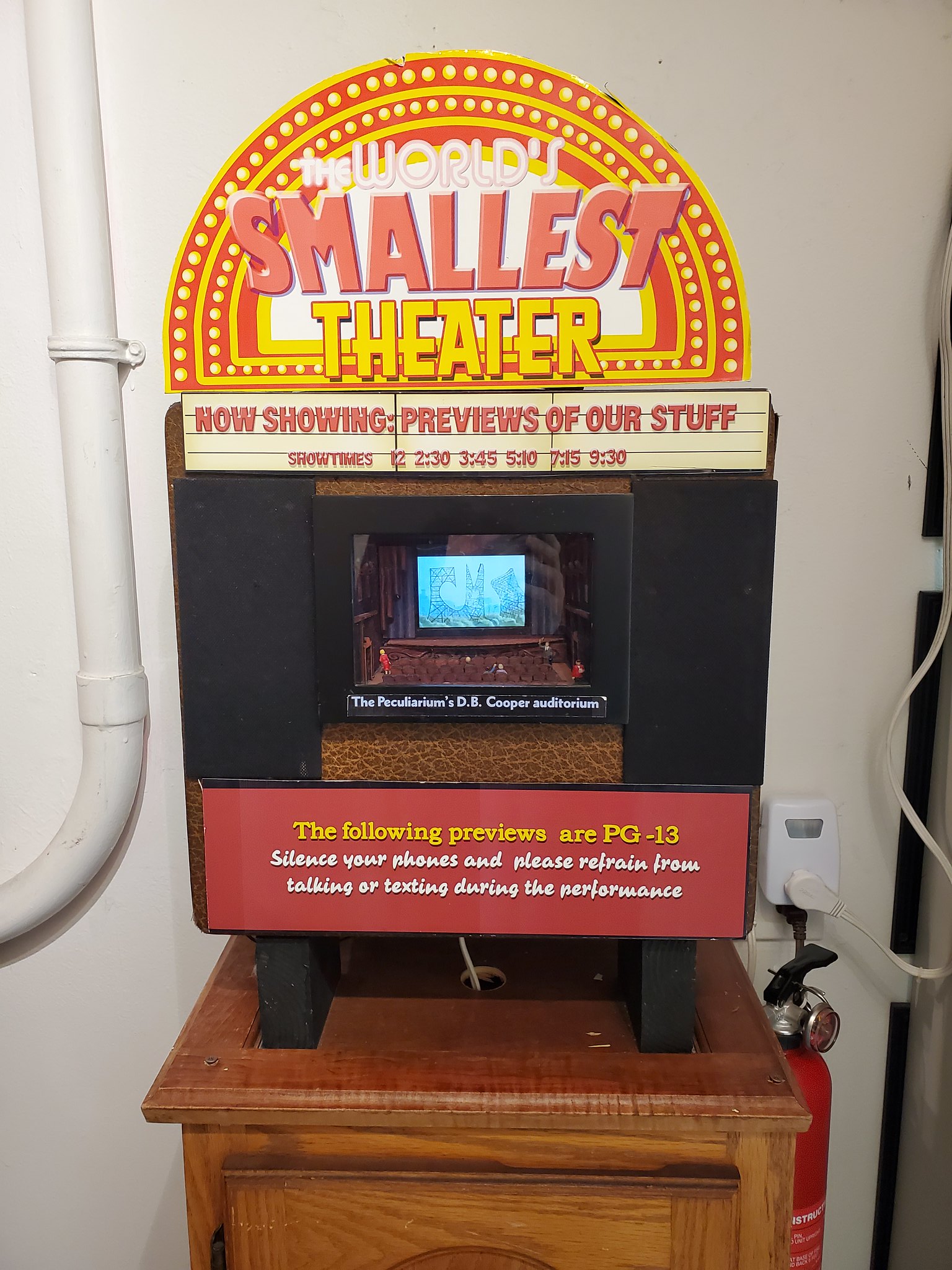 As I implied at the end of my last post, Jen has big feet. She’s tall, they are perfectly sized to her. Unfortunately she sometimes has trouble finding ones that fit well. Leave it to the Peculiarium to have just what she needed! 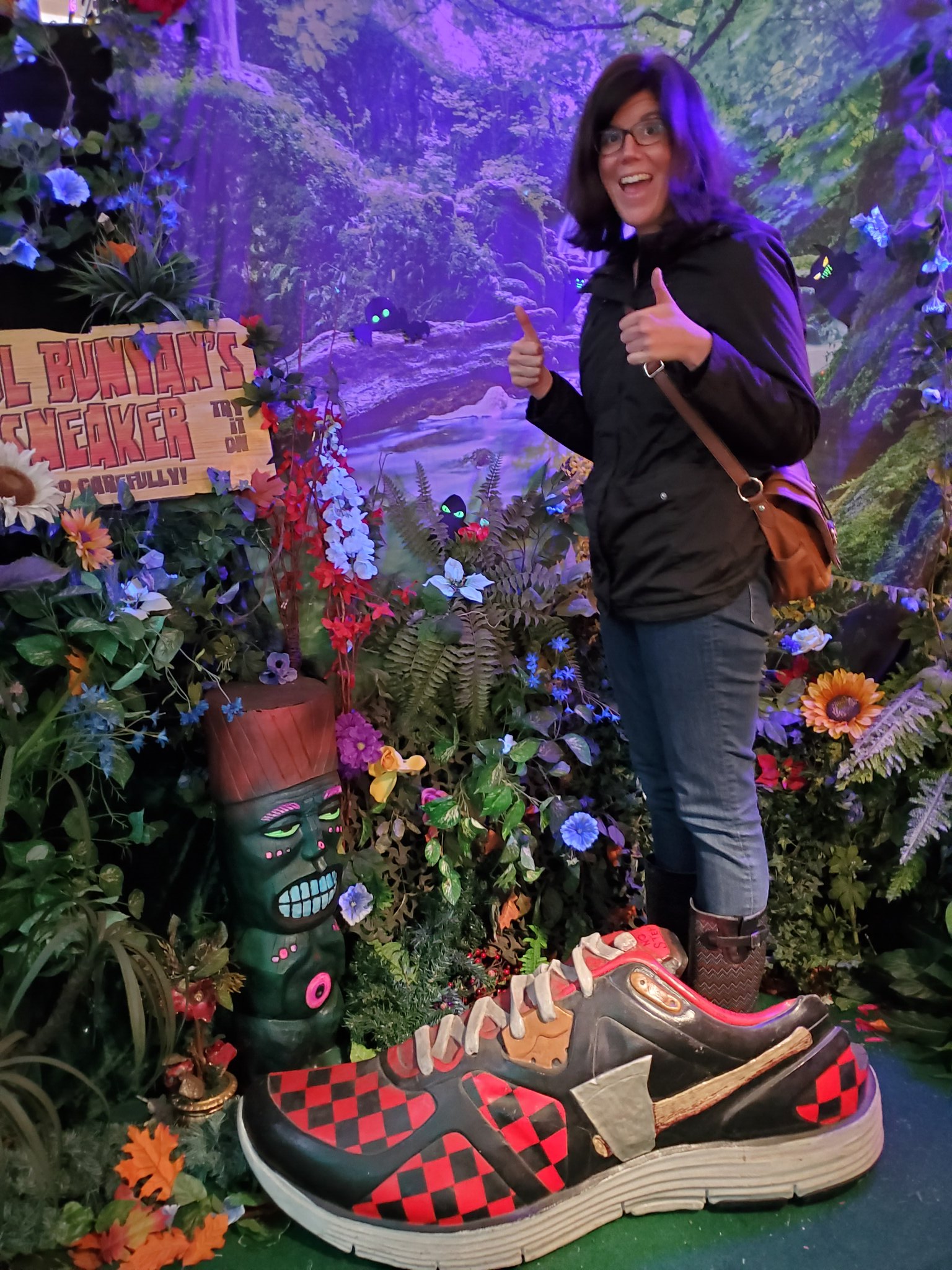 I also mentioned a photo popular in my office. My Facebook page has pictures of my cattle drive, videos of me riding a bull, and pictures of me shooting arrows off a horse. I don’t think anyone has talked to me about that last one. Yet when I got back to work, I had so many comments about the photo below. I find it hard to believe it’s the silliest my co-workers have ever seen me be but I swear they acted like they never thought aliens would dissect me at some point in my life. My office is decked out in Halloween and Phineas and Ferb items but this they thought was fantastic? I mean, it’s great but I was not expecting the large reaction it got. 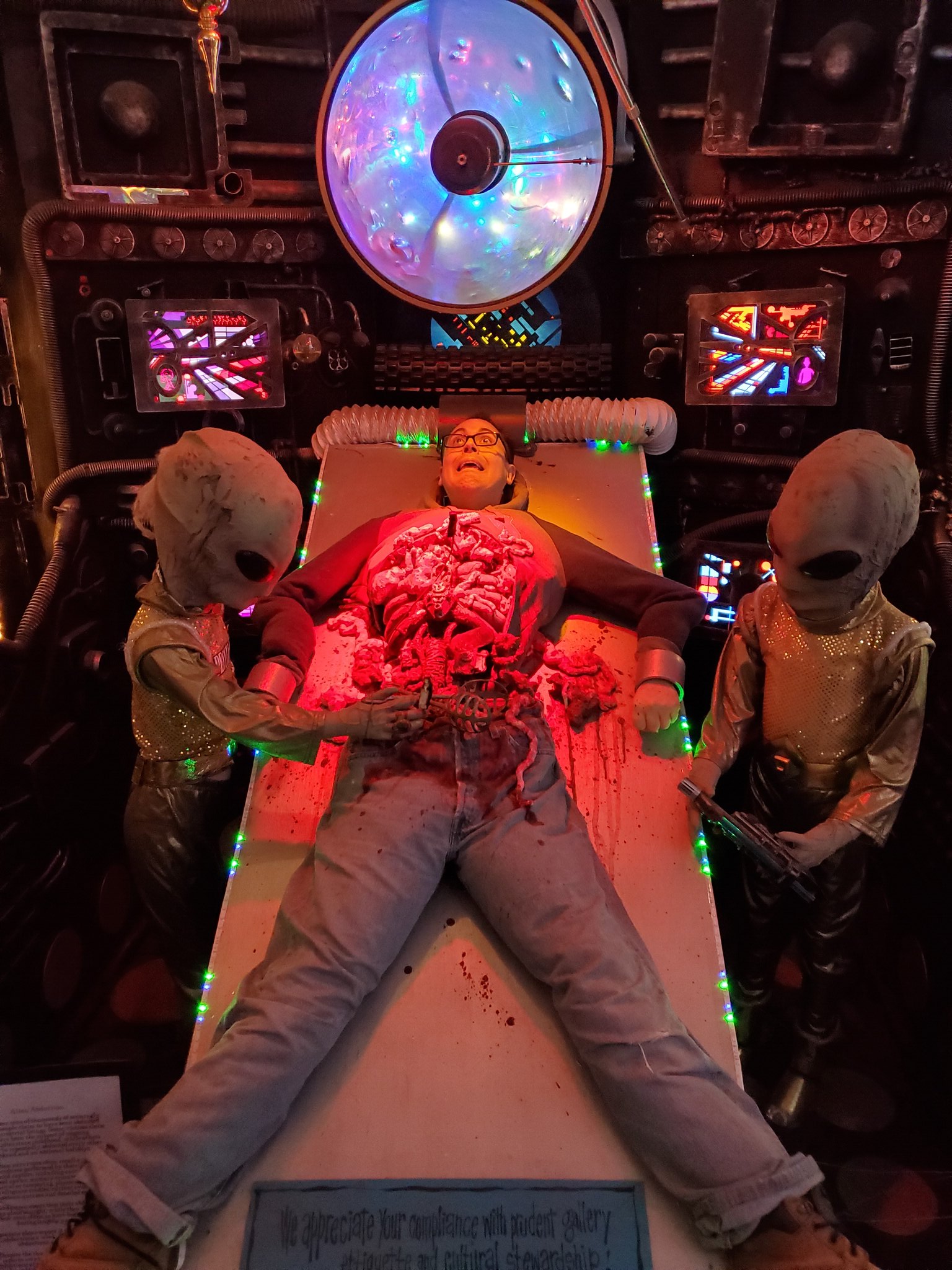 I think it’s a law that you have to go to Powell’s Bookstore if you are a tourist in Portland. It’s an amazing place filled with more books than I could read in 6 life times! It’s also full of books I wouldn’t want to read if I had 6 life times. Some looked amazing but there were some really weird things. Notice what section I was in. I would like to read that book on someone’s Funniest/Worst Holiday. 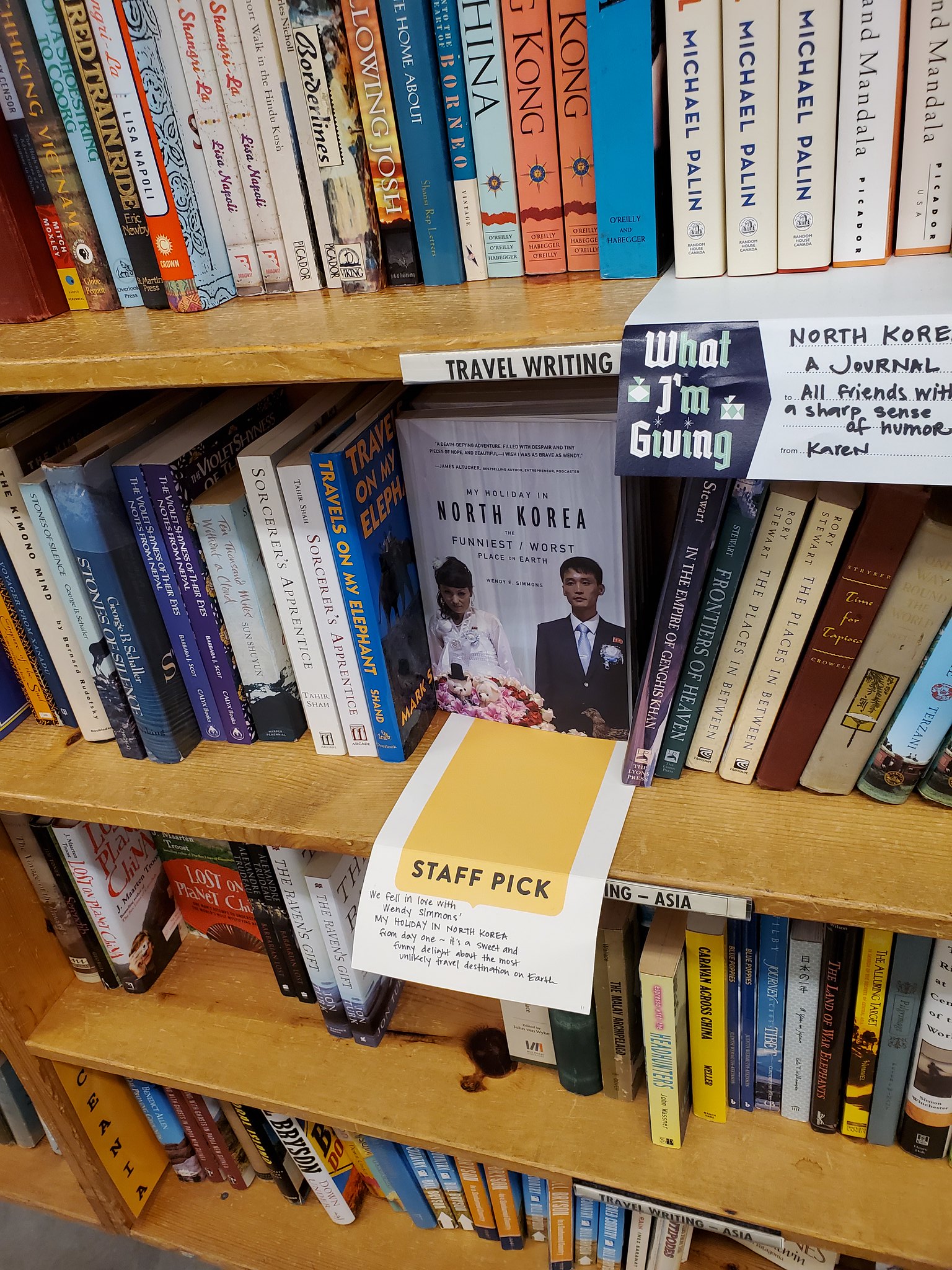 We also checked out Rocket Fizz, a tacky candy/soda store that had penny machines (all pennies will be shown in the last post, be patient). 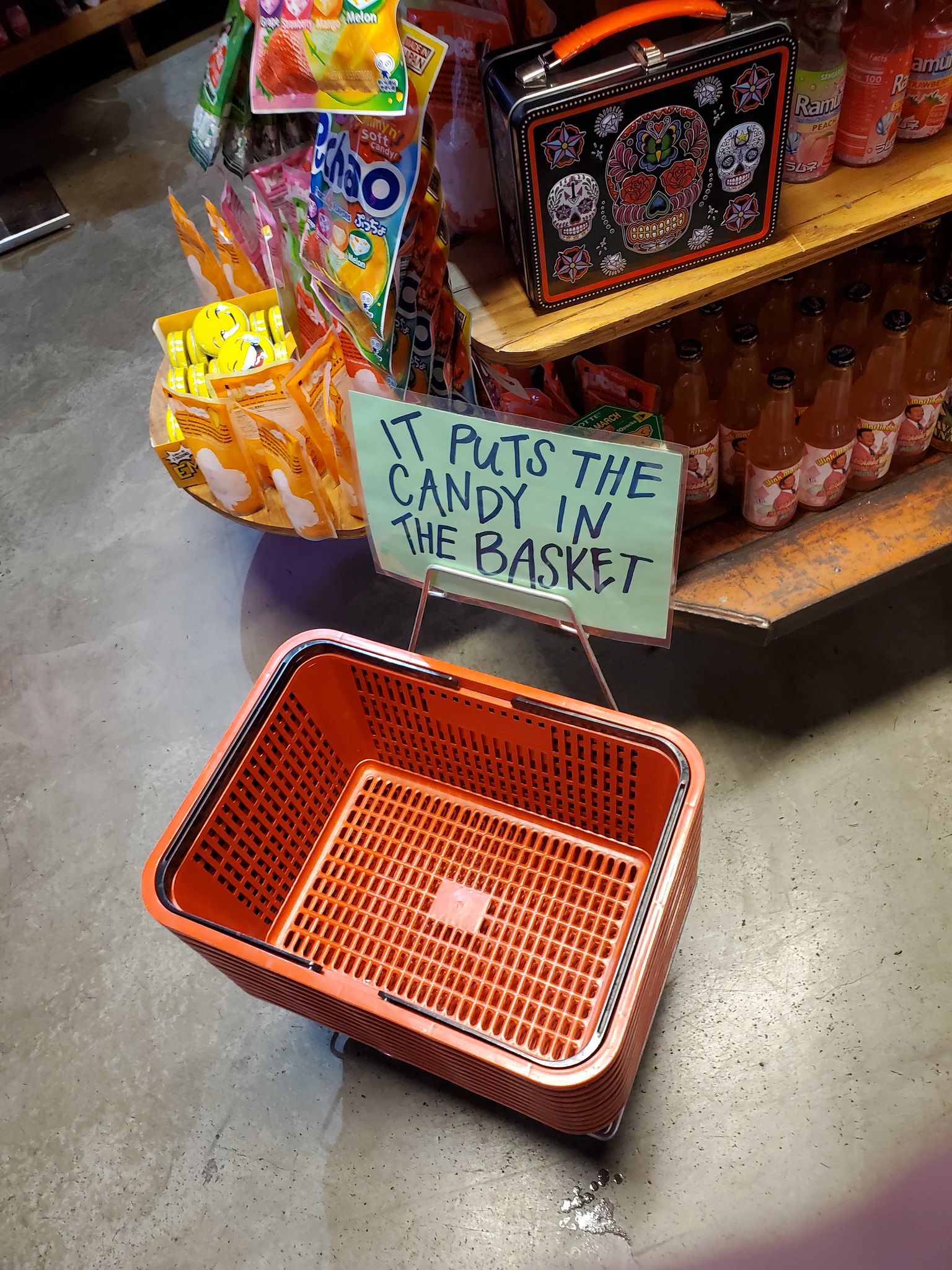 We ended the day at Stark’s Vacuum Cleaners for their museum and timeline of vacuum cleaners! Some might remember my last trip to a museum dedicated to cleaning products, some of you might not. Go read about it. It’s worth it. 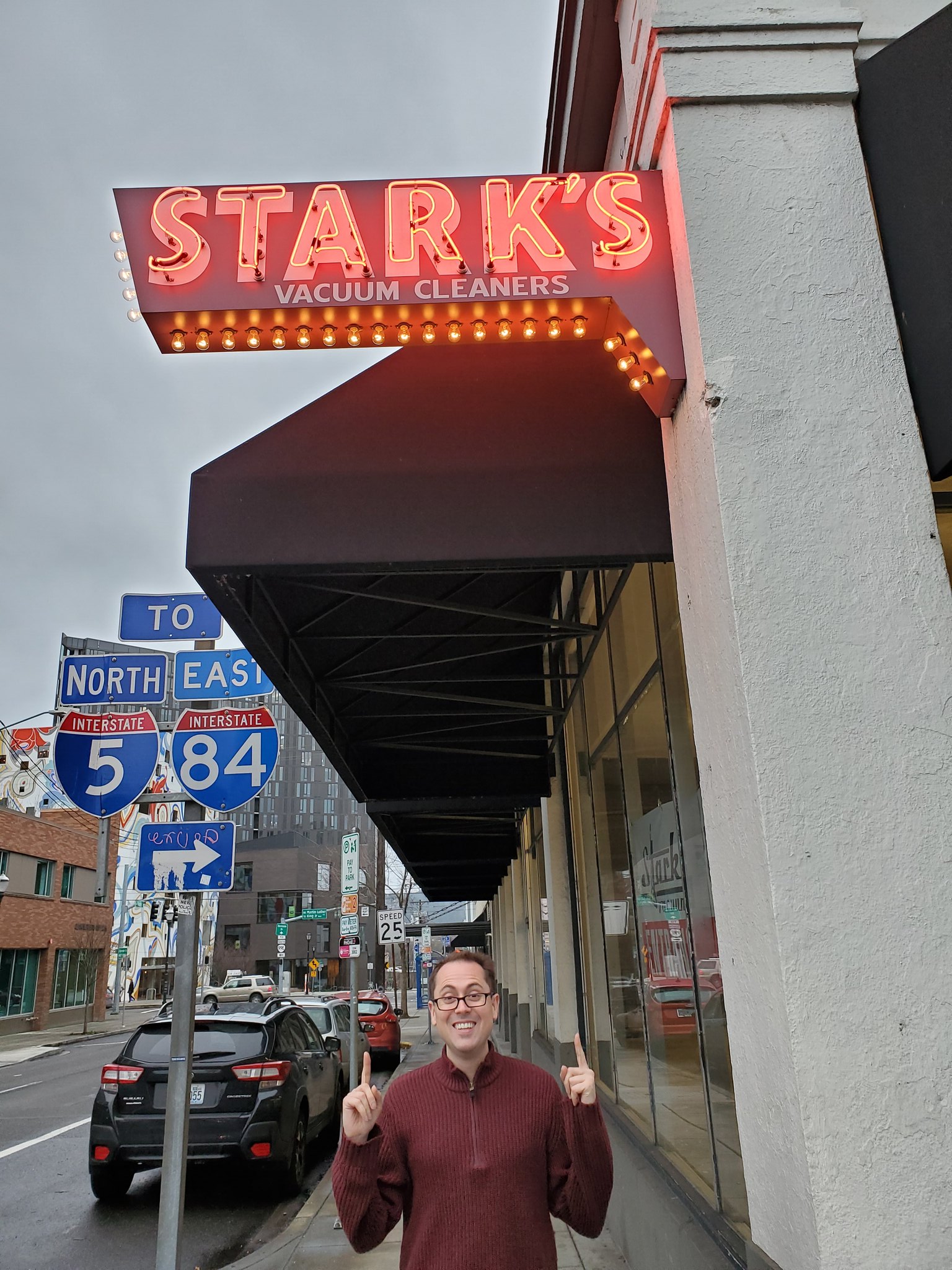 I think the exhibit was in another room originally but that part of the store is under renovations. At this point it’s just a timeline on a wall with various examples of sweepers and their evolution. It was interesting to note how and why changes came about. Some of the first vacuums were trucks that came to sweep your house for you. 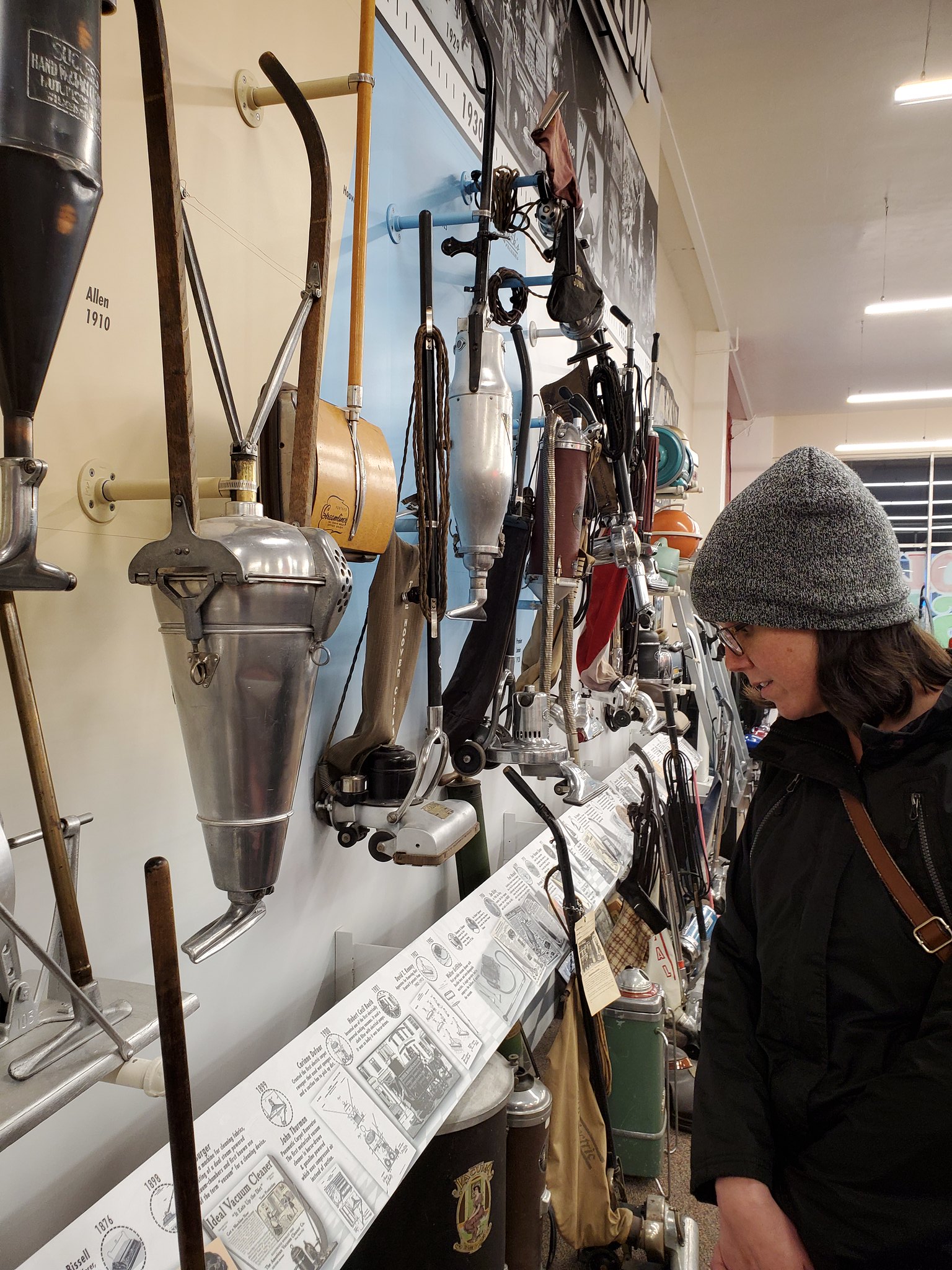 This little guy was my favorite. He was essentially an astromech in that it didn’t speak a human language, it was created to assist humans, and it floats on a cushion of air when turned on. That’s right, this is part hovercraft like when R2 used his little jets in Attack of the Clones. I assume if you’re reading this blog, you’ll get a few Star Wars references. 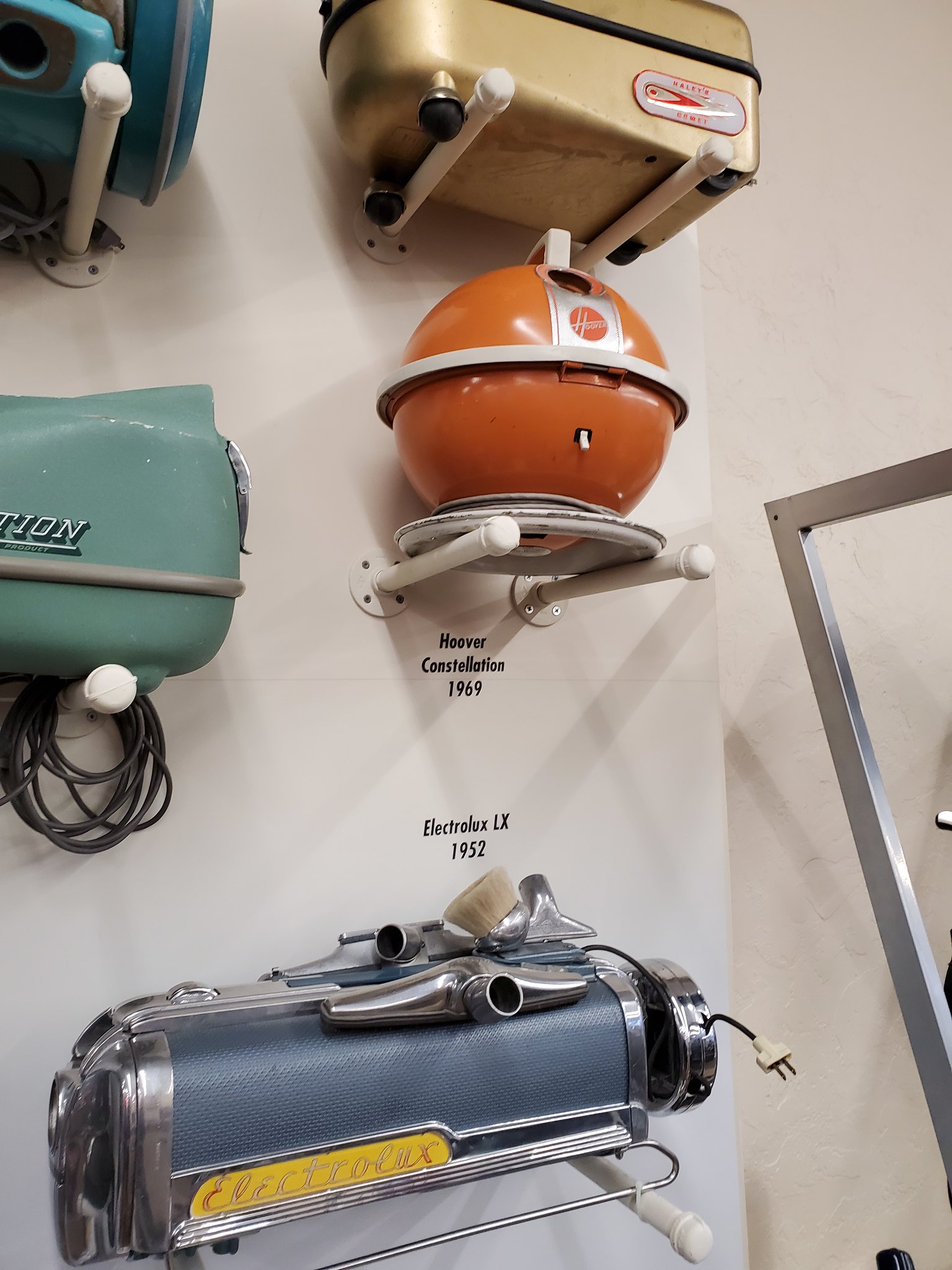 And after that we headed back to the farm for our second night being guarded by Frank the Drooling Cat. The next post will feature dumpling day, an octopus tree, and me being scared away from a bench by a lady waiting outside a courthouse.