We had a lot of setbacks on our trip (and quite a few pleasant surprises). On day 2 we were supposed to take a turbo-clipper boat from Seattle to Victoria, BC to stay the day and night with one of the loves of my life, Emilia. Who knew that the boat would sell out? It’s an everyday ferry that we assumed would just have seats. A few days before we left the East Coast I decided to pay for the tickets online and found out there weren’t any left and driving to Victoria was not feasible. That’s okay, we rebounded and came up with new, last minute plans to visit Leavenworth, Washington. 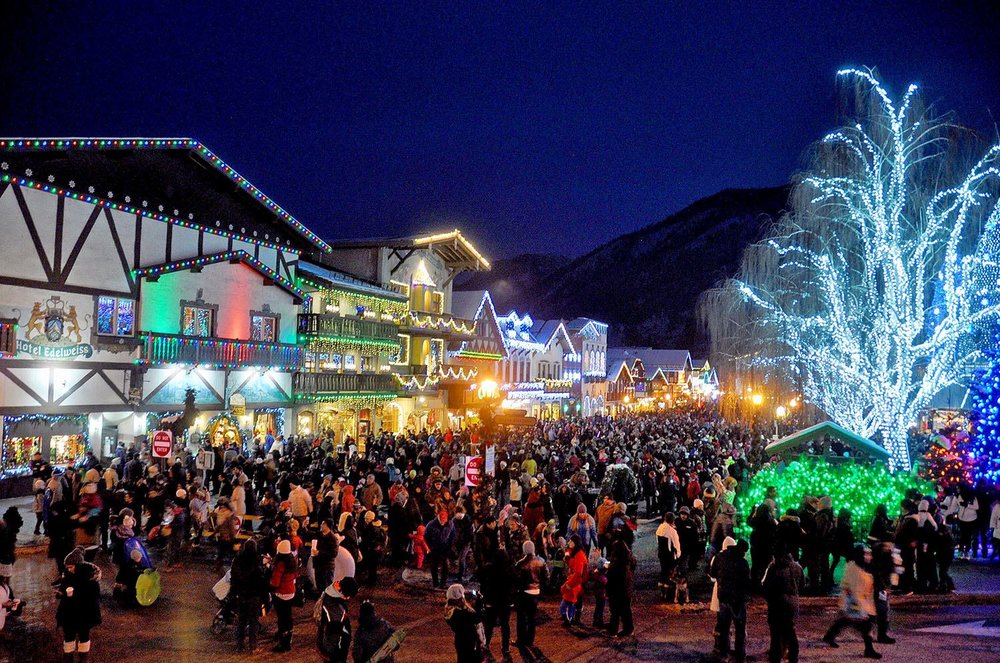 Leavenworth, Washington is a faux Bavarian town buried in the mountains as some tourist trap. Of course it suckered us in. There is really nothing to do in this town but eat and drink. In one office looking building we were in, there were 4 places for wine tasting. That was just 1 building! In the two streets that make the heart of the town, there had to be at least a dozen. At least another half dozen were dedicated to spirits or beer. We focused on the wine, cheese plate, and brats. I was happy with that.

The true highlights of the day for me were a damn fine cup of coffee and the big, majestic Douglas fir trees we saw on the drive. If you don’t get those references, shame on you. We saw a bunch of sites from Twin Peaks, a brilliant TV show. We started with the waterfalls from the theme song/intro to the show. 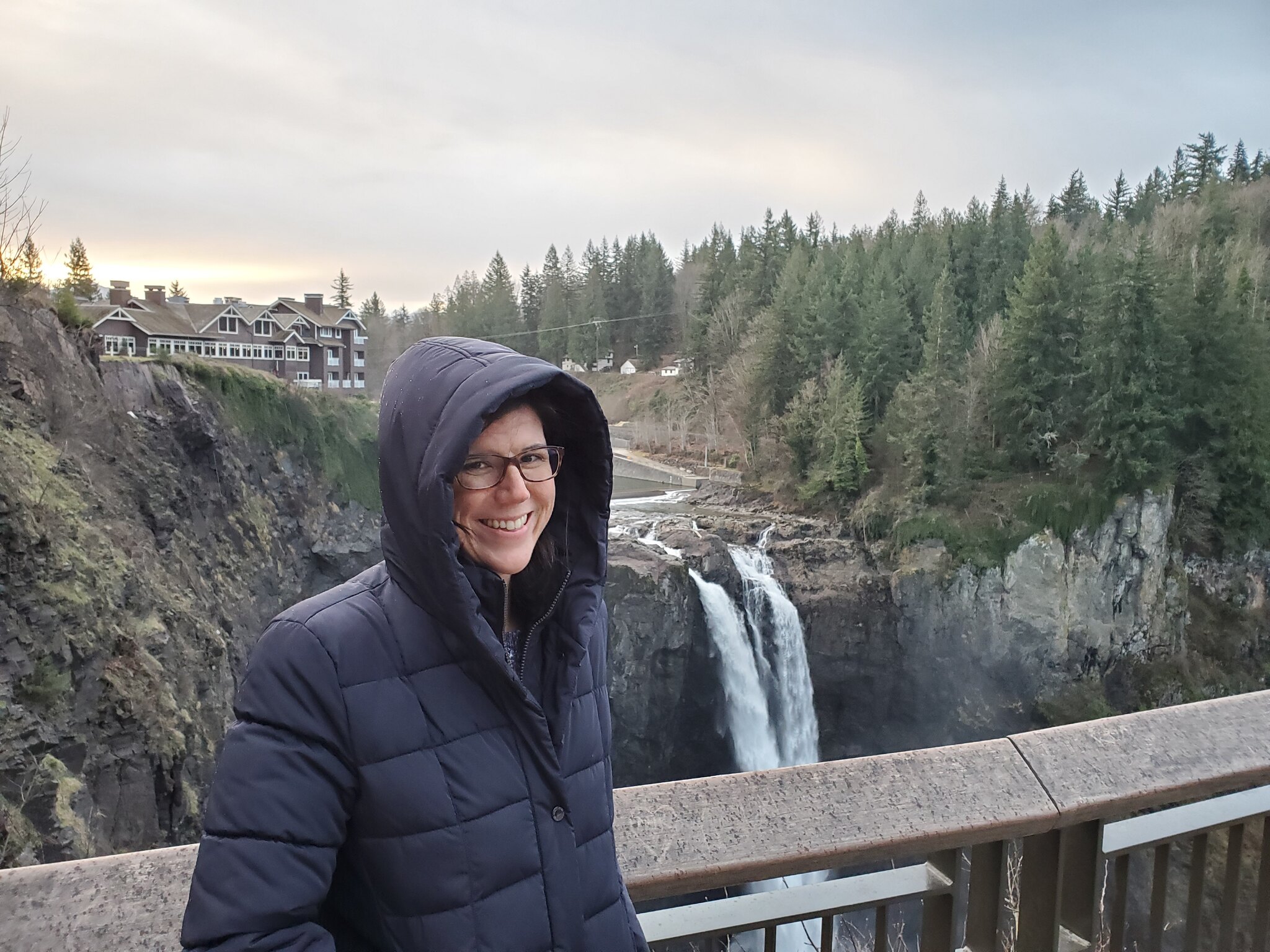 Can’t you just hear that awesome theme song? Well if you’ve never watched it, you probably can’t. Get the soundtrack. It’s great. Be careful if you visit the waterfalls though. Apparently the adjacent parking lot has prowlers. I love their signs! That sure is a prowling dude by that car. 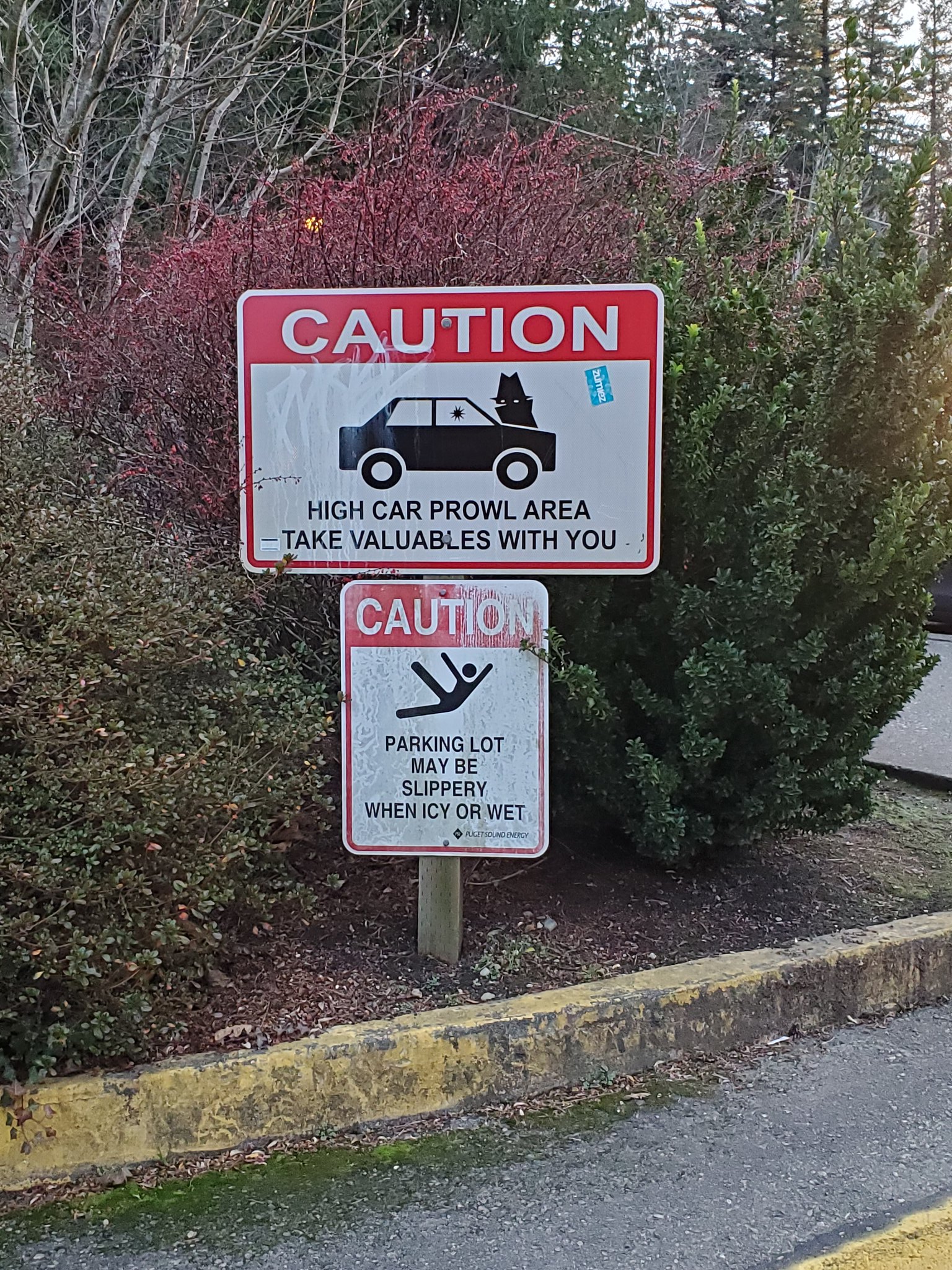 After we left here we saw the biggest log! Now I can’t really confirm it’s the biggest log, I didn’t run the numbers. I can however tell you it is a log and it is big. Look at me being moderately impressed. 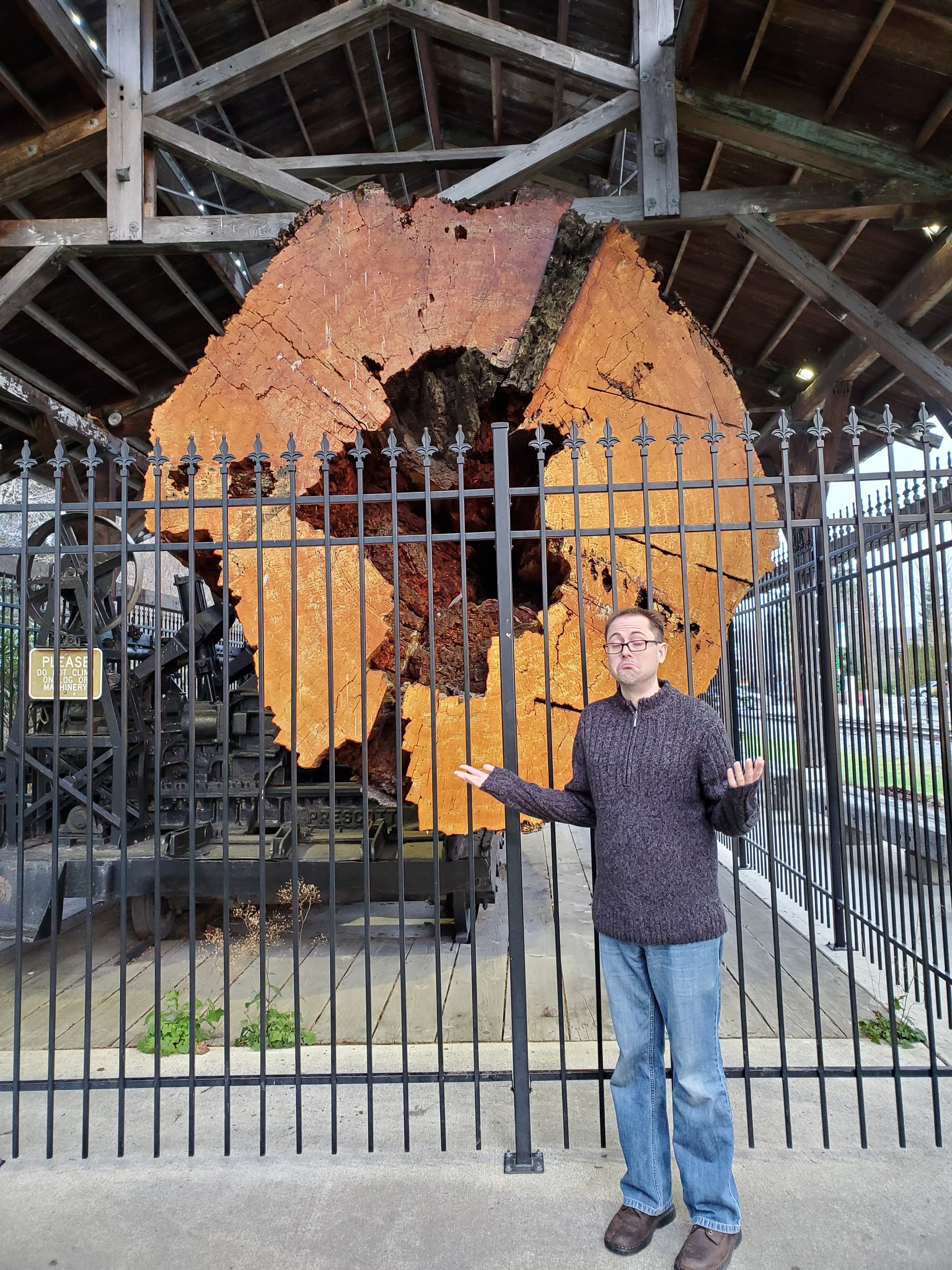 And the highlight of the highlight? We ate cherry pie at the Double R Diner just like Agent Cooper. The inside has been remodeled to look just like the show. I don’t drink coffee so I can’t attest to it being “damn fine” but I can confirm it has the best cherry pie. I don’t like cherry pie and wasn’t impressed looking at it, but jeepers creepers, that was a really freaking good piece of pie! 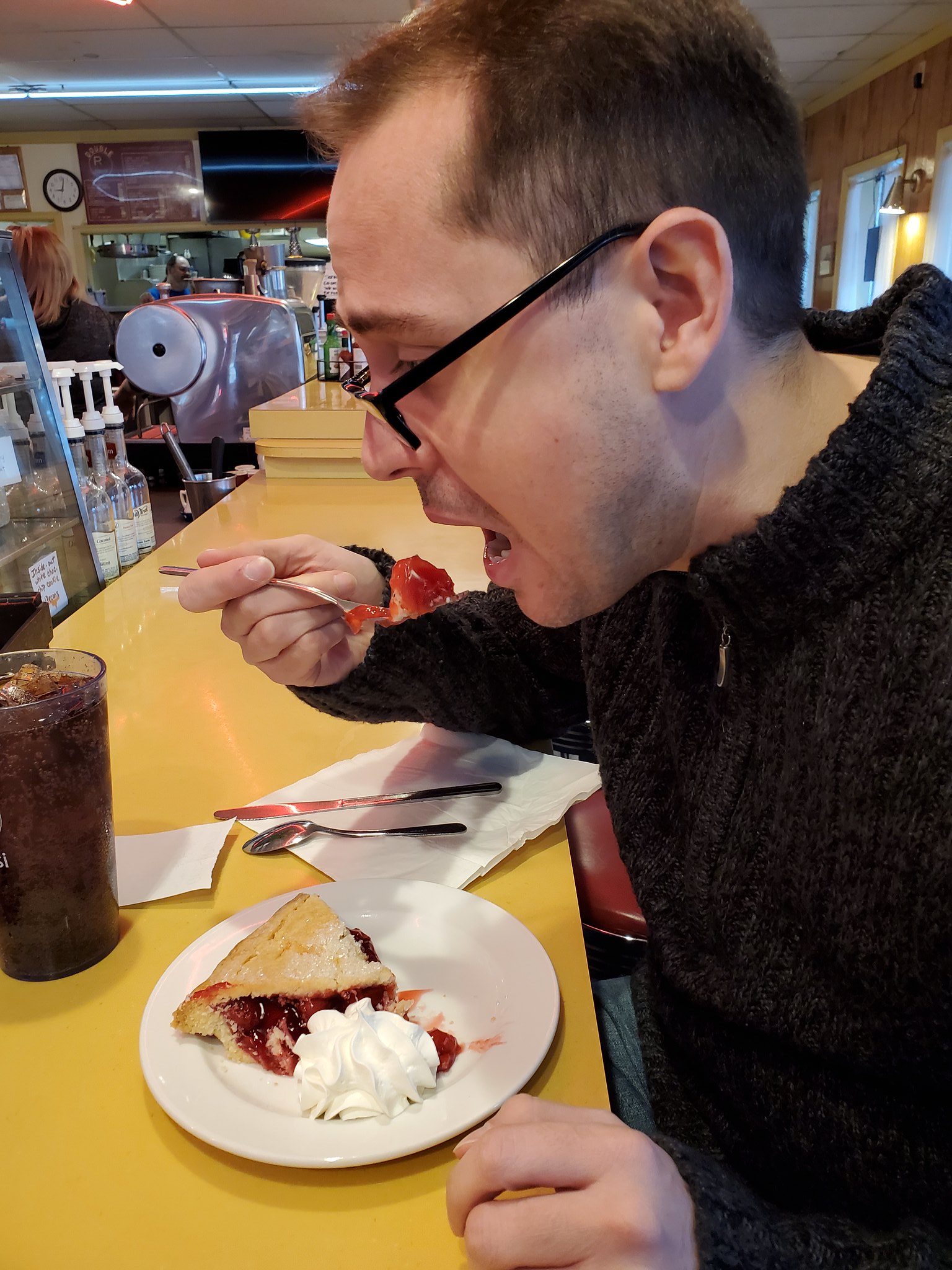 Our third day was our drive to the beach where we would spend two nights for a New Year’s Eve celebration. We couldn’t leave Little Bavaria though, without seeing some reindeer. Nearby is a reindeer farm where they let you loose (as long as you haven’t been around goats, they carry diseases that can wipe out an entire herd) to feed and pet the shy critters. At the entrance, along with Santa, was this turkey that tried to court Jen. It’s plumage was in full force and it was doing a shaking dance and dragging its wings along the ground. It was full-force flirting. 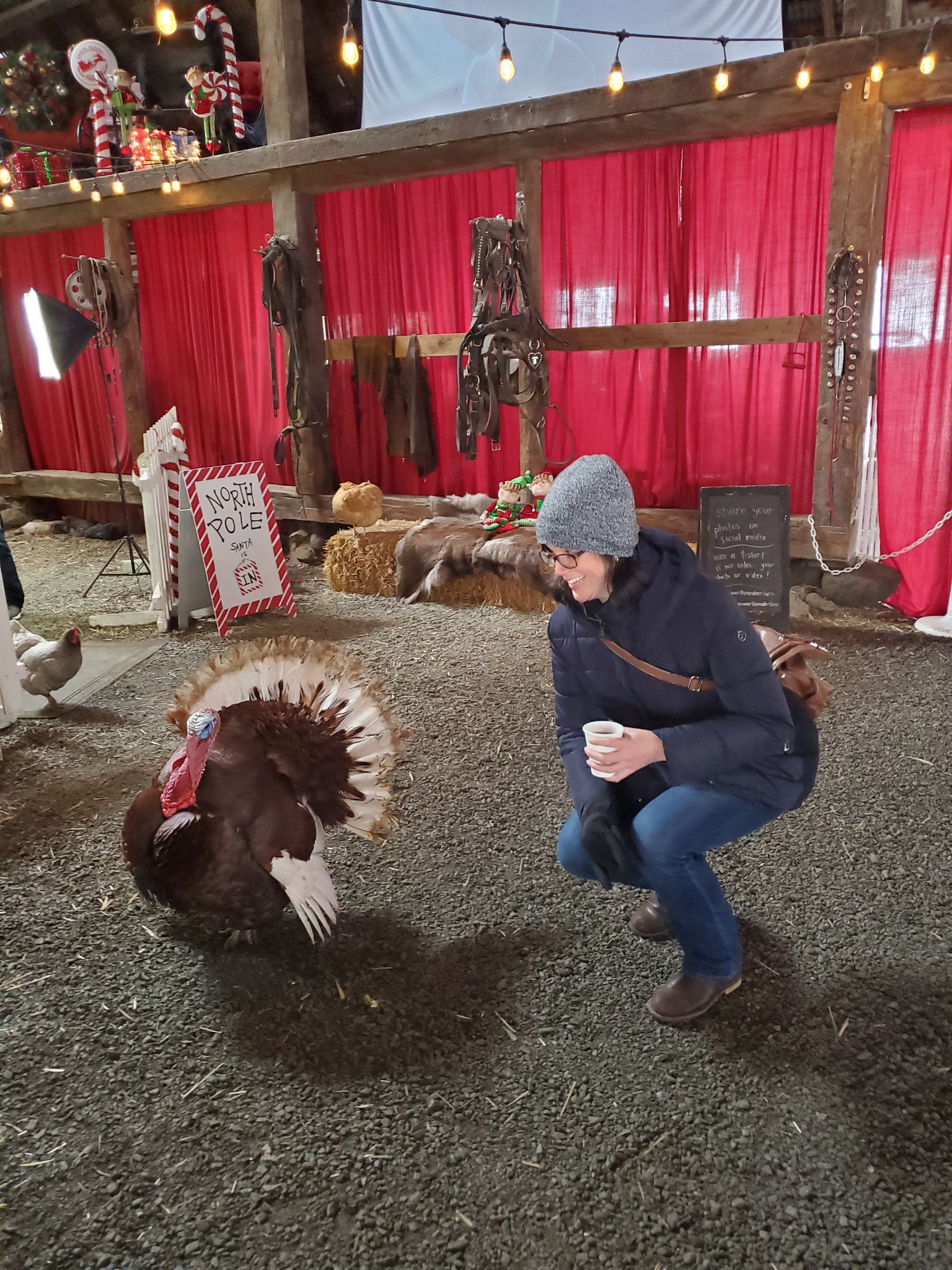 It was a cold morning in the mountains and we had to wait until everyone arrived. YOU MUST BUY TICKETS IN ADVANCE! This place sells out quick. To keep you warm they offer hot chocolate and provided a Yuppie Hobo’s natural environment. Yep, we thrive best in JC Penney clearance coats and barrel fires. 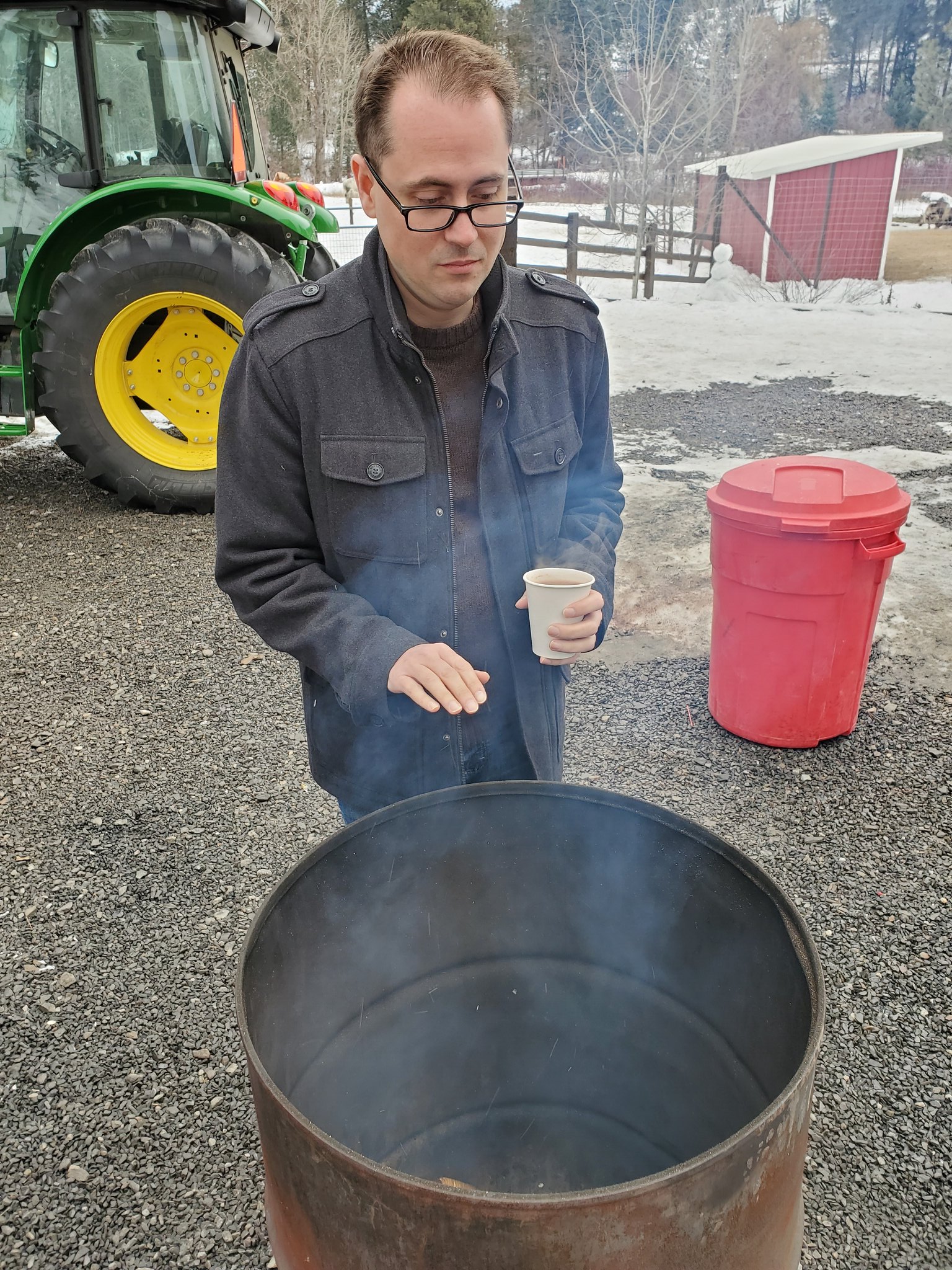 Not my favorite picture of me. But that’s okay, look at a cute reindeer! 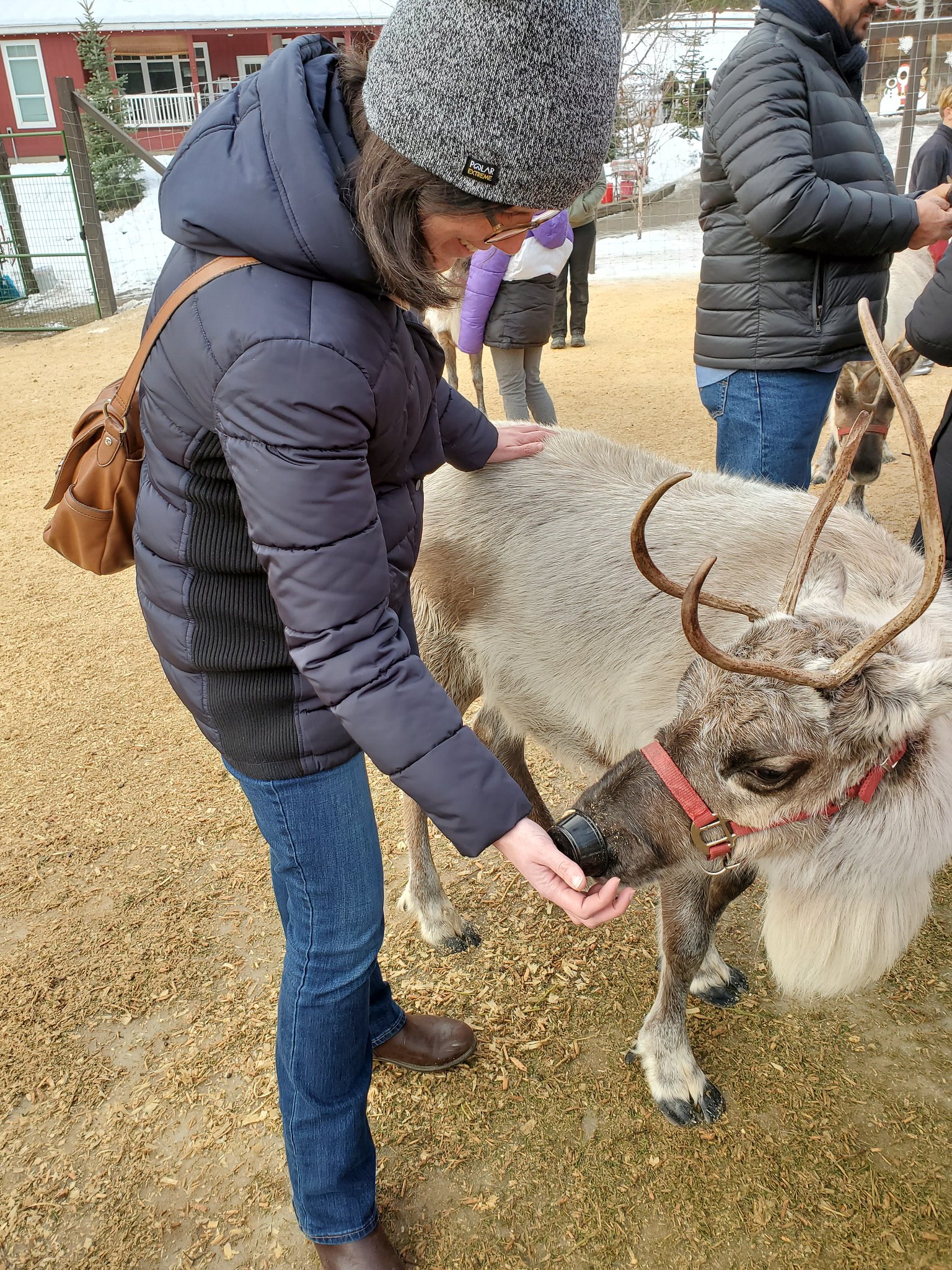 That little one was the least timid but still pretty shy. The largest male was named Sven and check out the rack on that guy! 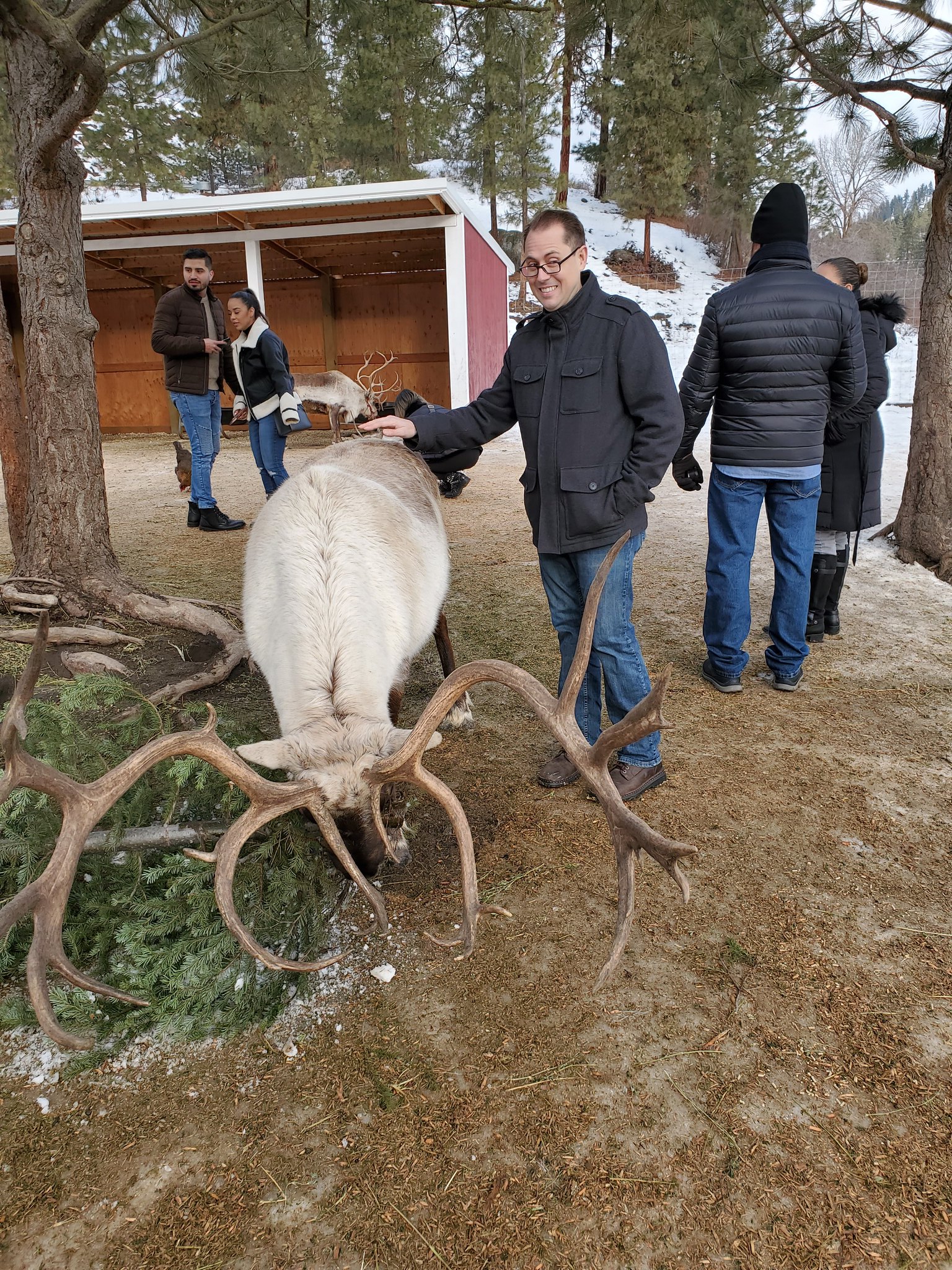 On the way out to the coast we stopped at Big Tom’s because I heard they had some awesome dinosaur statues. They did indeed, however I’ve decided instead of putting a few up, in the near future I’m going to make a stupid post just of me with dinosaurs. Why? Because I have enough pictures of me with dinosaurs to make up a full post. I will show these guys trying to eat one of the best burgers I’ve ever had. I normally don’t go with sauces on burgers but figured I should taste theirs since I was there. Good decision. 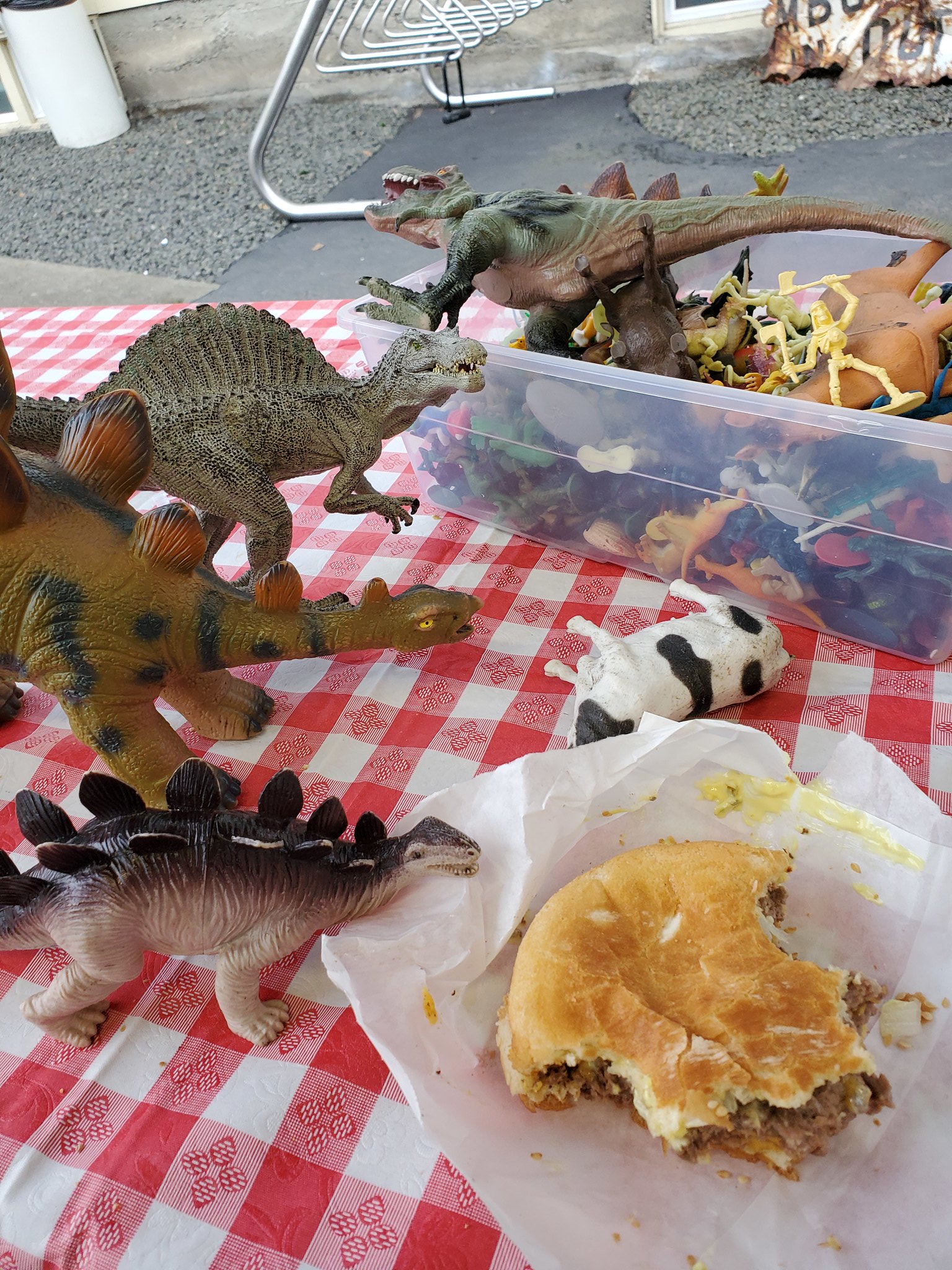 The place has all sorts of Big Tom’s around dressed as different folks. 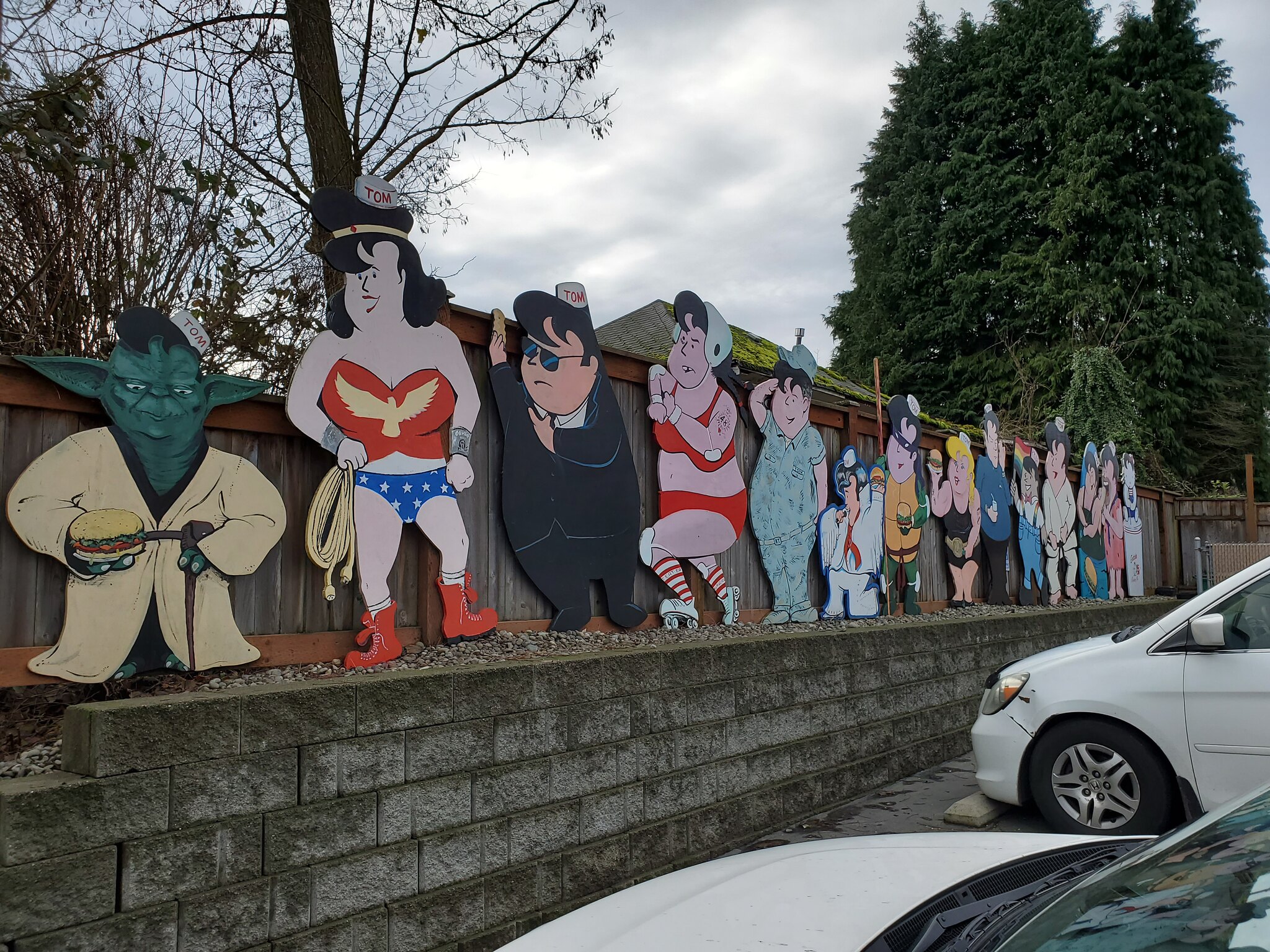 Look they even have a Dr. Jen Big Tom! Delightful. 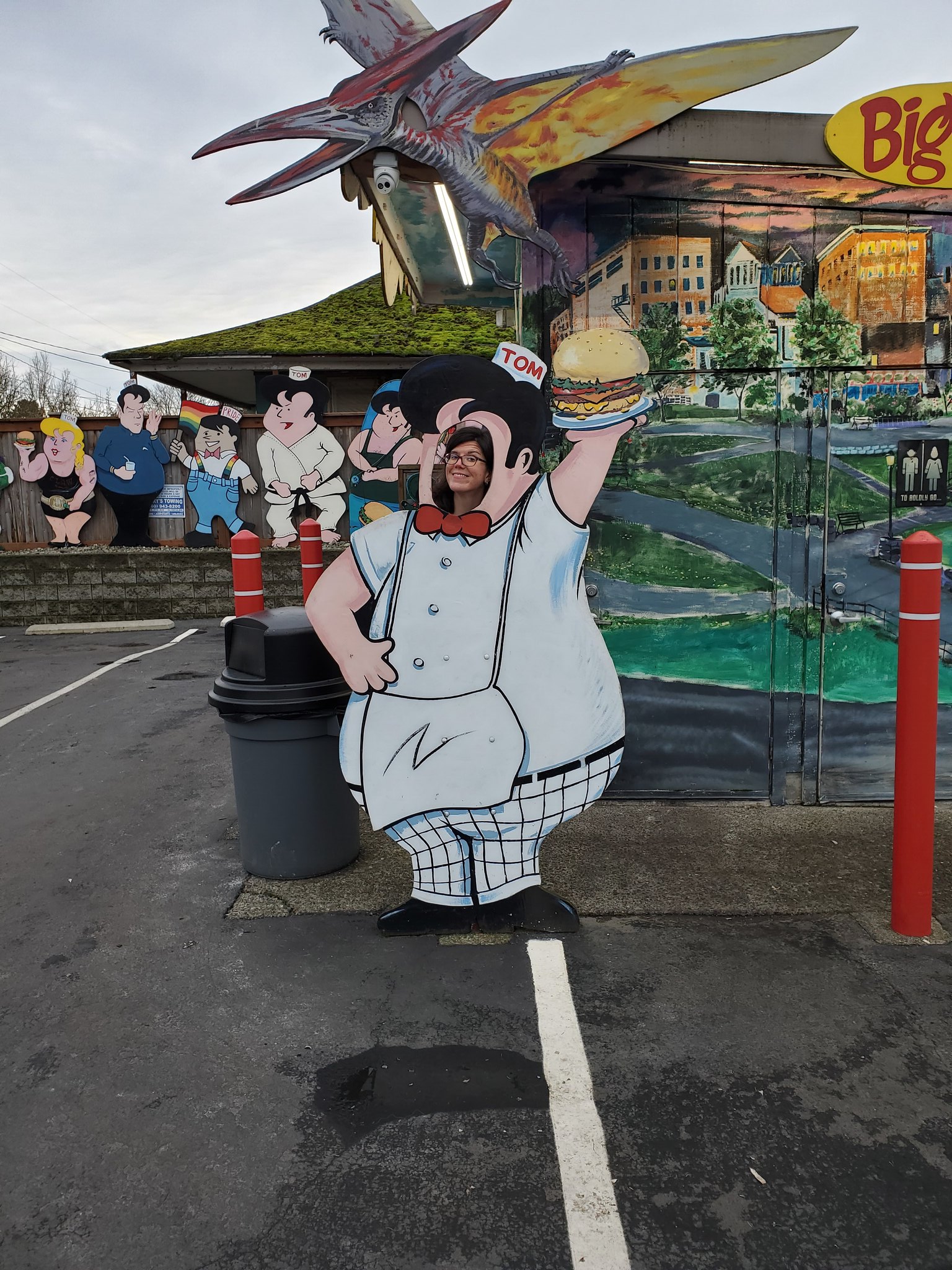 The place also had some swanky outdoor bathrooms. 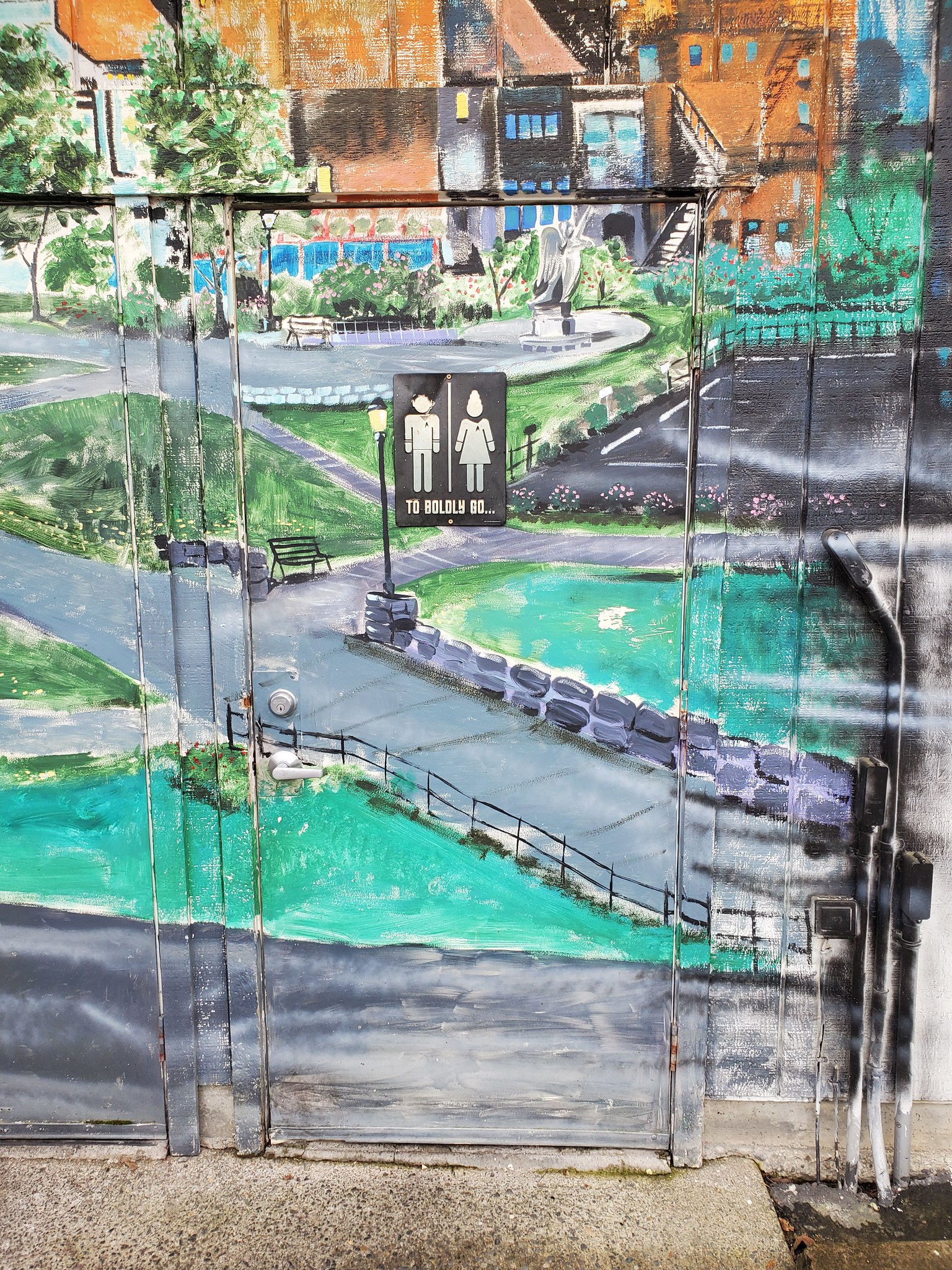 As we continued west we blew into a town with loads of metal sculptures scattered around. The artist made all sorts of scenes that can be found driving up and down the streets. We were pretty tired but found a few. The main stretch of highway had a man walking a giant pig, as all good main stretches of highways should. 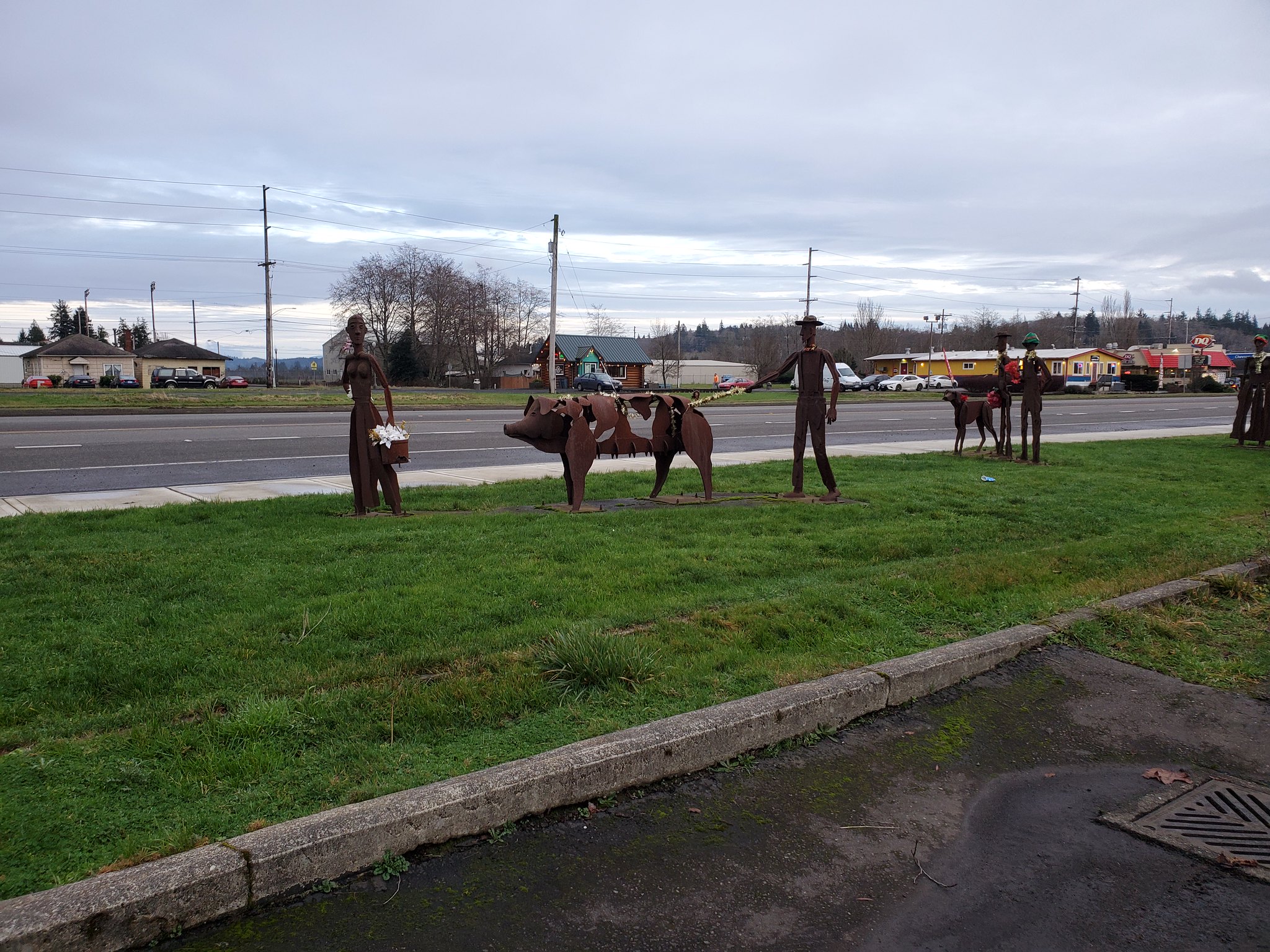 My favorite was the hounddog with the bow in the background. 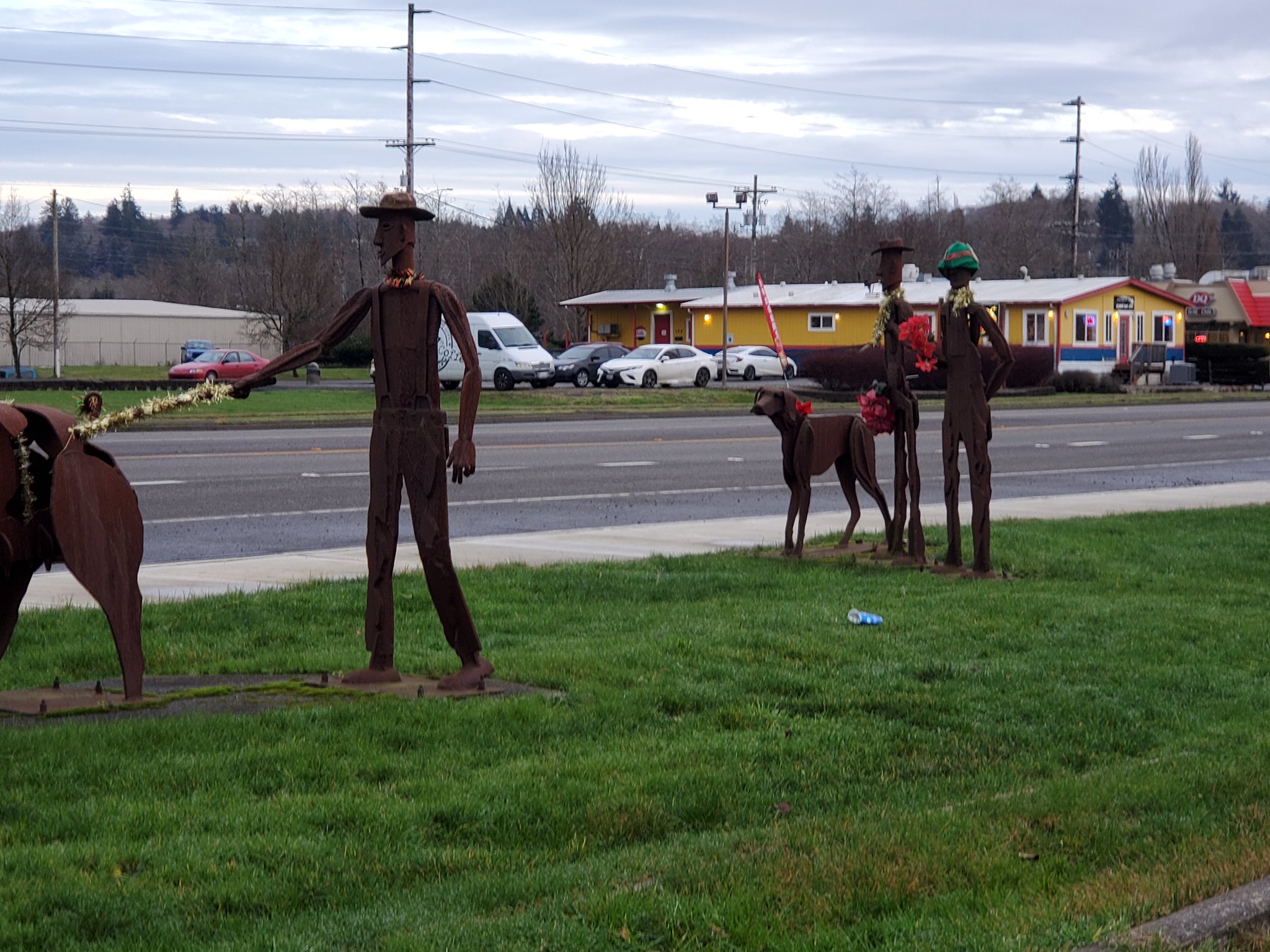 And our last stop was the World’s Largest Oyster so Dr. J could show what a pearl she really is. I mean, it was a large oyster, but my gut instinct is there are bigger ones out there. 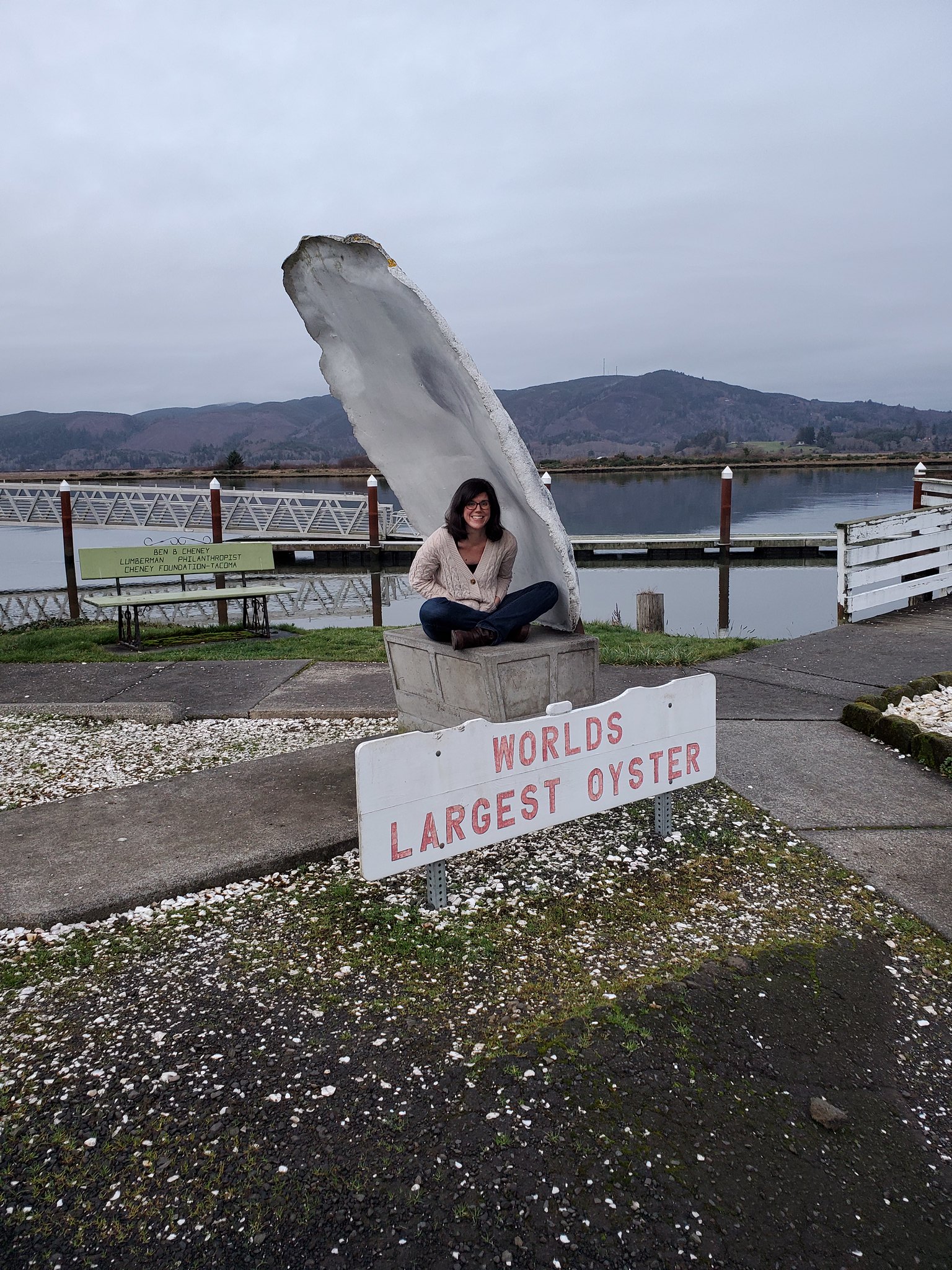 Stay tuned, the drama will continue!