For my January adventure I spent the end of 2019 through the first week of January touring the Pacific Northwest. This trip was a fall back into the theme of “tourist traps, tacky gift shops, and Americana.” It’s good to get back to my roots of Fiji mermaids and America’s largest crap that no one asked for. I stayed at my first AirBnBs on this trip, got my first rental car in over a year, and got dozens of smashed pennies. This trip was a big success and you will be getting 8 straight days of posts covering it. Lucky you!

Because of the length of the trip and number of pictures I have to share, I’m going to cut this trip into days like I did for my mega-trip in 2017 (I sure am linking to myself a lot, but shameless self promotion gets you views). Typically I wouldn’t count my flight as part of the adventure, but it’s worth mentioning that the evening of Dec. 27th my flight to Seattle was the most eventful flight of my life. 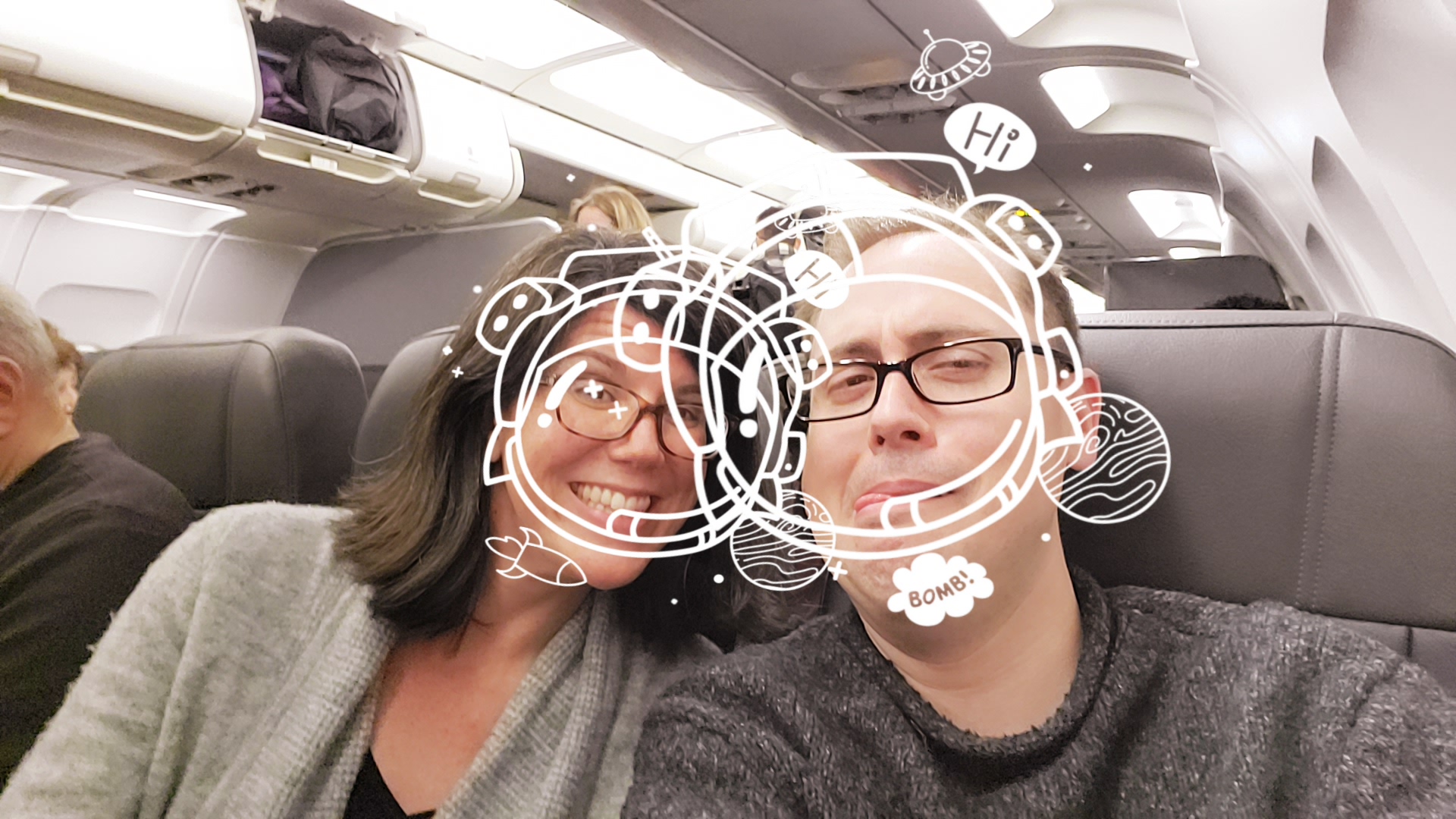 Apparently the first class steward accidentally hit the guy in row 1 of economy in the head while closing the overhead bin. The passenger then said something to the effect “First day on the job?” We weren’t there but heard the story from other people’s conversations (everyone was nosy and wanted to know what happened). By the time we got on the plane, apparently tensions were high. Steward, who we’ll call Ace, thought passenger, who we’ll call Chip, was taking pictures with a phone. Apparently that’s illegal and Ace told Chip to delete any photos. Chip asked for Ace’s last name. Ace said Chip knew his first name and could contact the airline but was not going to give out his last name. Chip’s wife butted in and said she thought we were all done with this situation.

We sit at the gate for a while. Then we hear Ace talking in first class, very loudly, about not feeling safe with Chip on board. The captain comes on the loud speaker and apologizes for the delay saying he has paperwork to do. Seriously? Paperwork? Ace continues to complain so that the entire front half of the plane can hear. People come on board and ask Chip and his wife to leave the plane. We figure it’s over with but hear Ace going on and on about how Chip shouldn’t be let back on. Then Ace states Chip should be sent to the back of the plane, far away from first class where Ace works. Eventually nothing changes. Chip gets back to his seat up front, curtain to first class closes, Ace stays in first class, and we fly off an hour late. 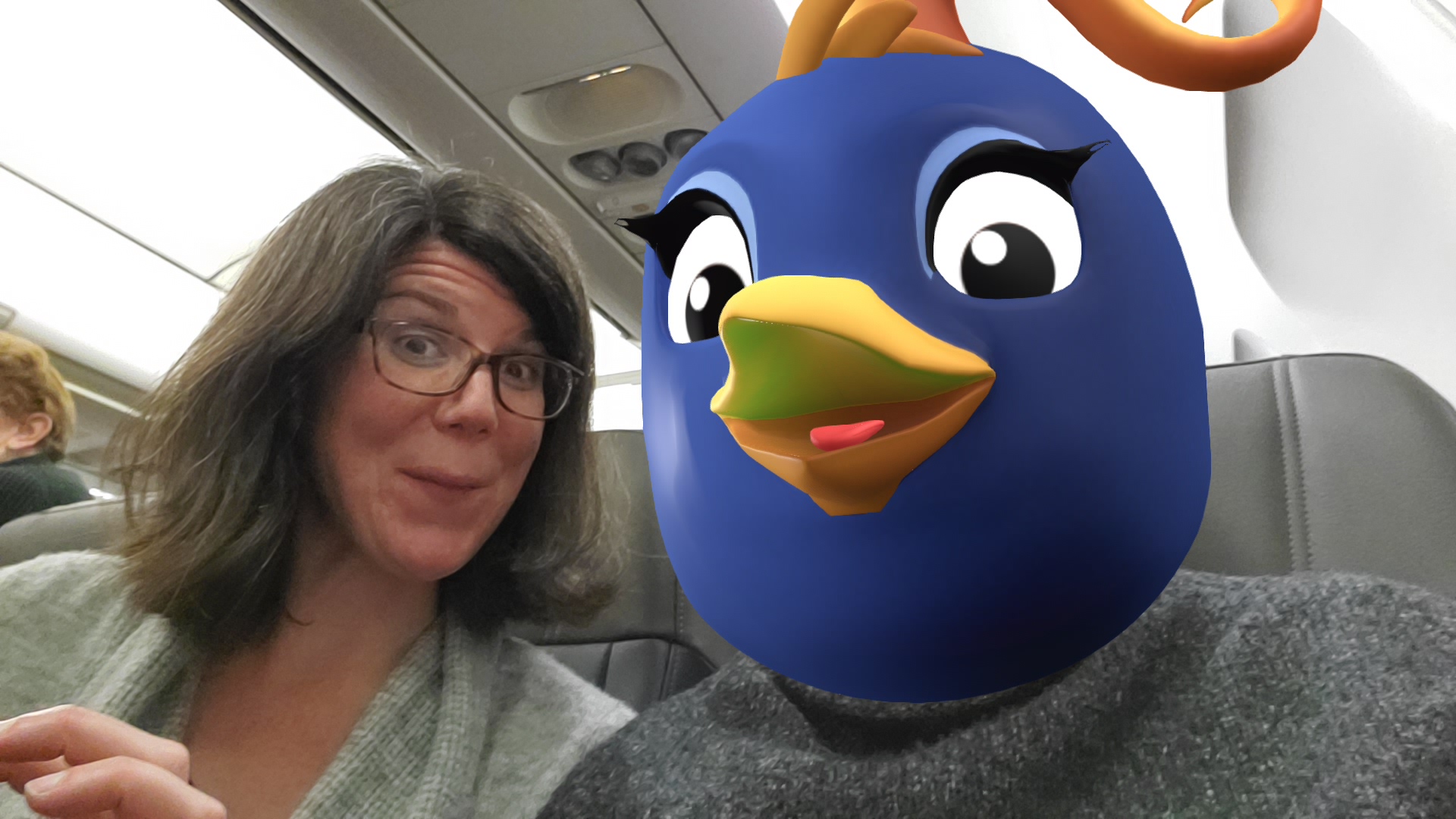 When we land the pilot told everyone to stay seated as there was someone who needed medical help getting off. Jen had heard a guy talking to a stewardess about not feeling well and got a cup of water to help his stomach. We figured the guy was throwing up in the back so we sat back and waited. Two confused EMTs with lots of equipment came in and asked the entire flight who had the head injury. I think half of the plane looked away awkwardly and the other half looked at Chip with contempt. He raised his hand, said it was him, and that he was fine. The EMTs shrugged and left. Apparently Chip had made the comment that he was going to “lawyer up” over the head bump. Silly Chip. Had he have been injured, I doubt they would have been able to get him to the hospital quickly. Watching the EMT staff, stewards, and baggage claim people was like watching the Stooges. The baggage people completely blocking the ambulance door is great. 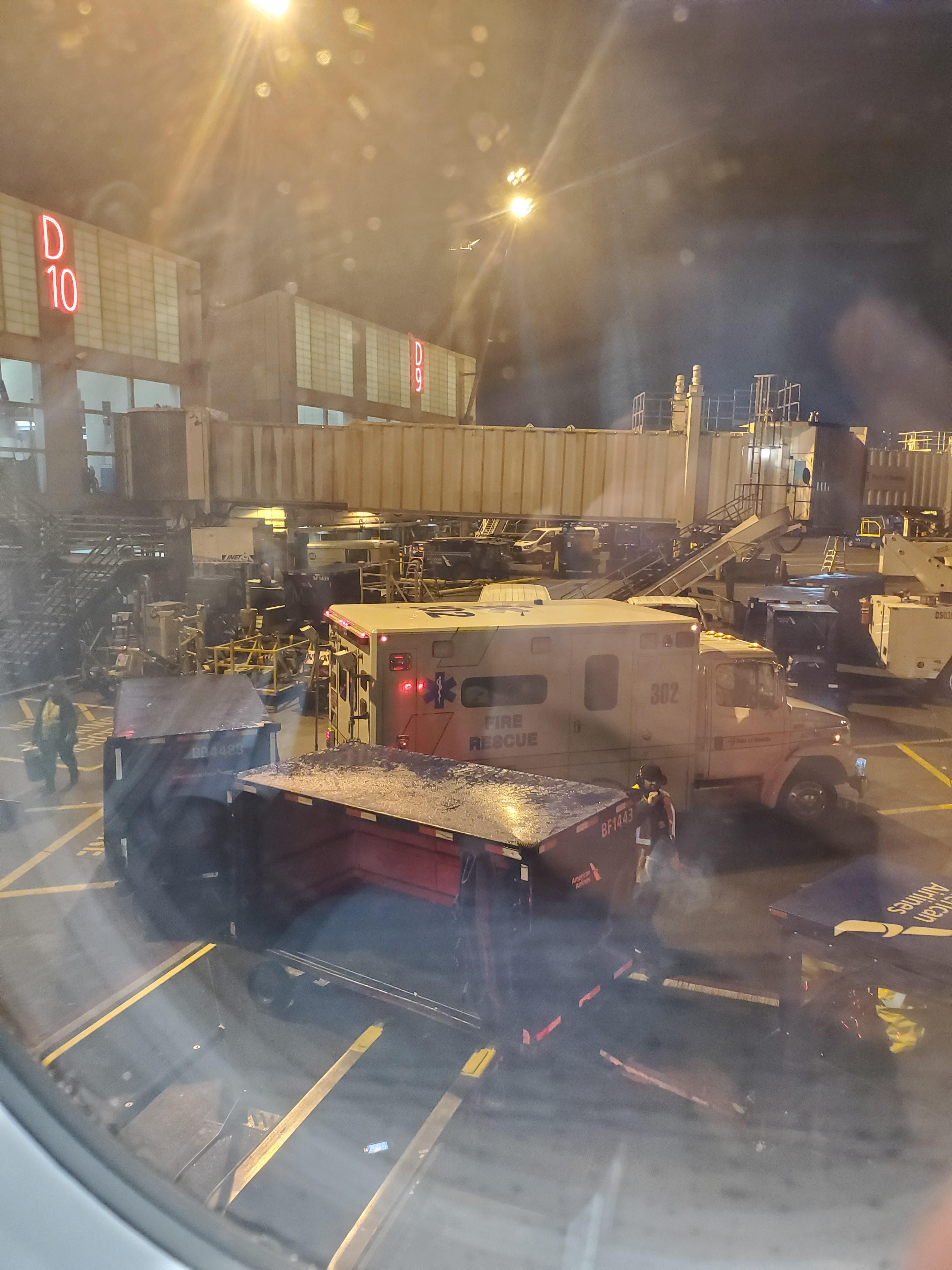 It was about 1 am East Coast time, so we were a bit sleepy by the time we hit Thrifty Rental. We picked up the Soul and drove into Seattle. I only made a few wrong turns through construction and then looking for the parking lot and we got to our room safe and had a nice night’s sleep. 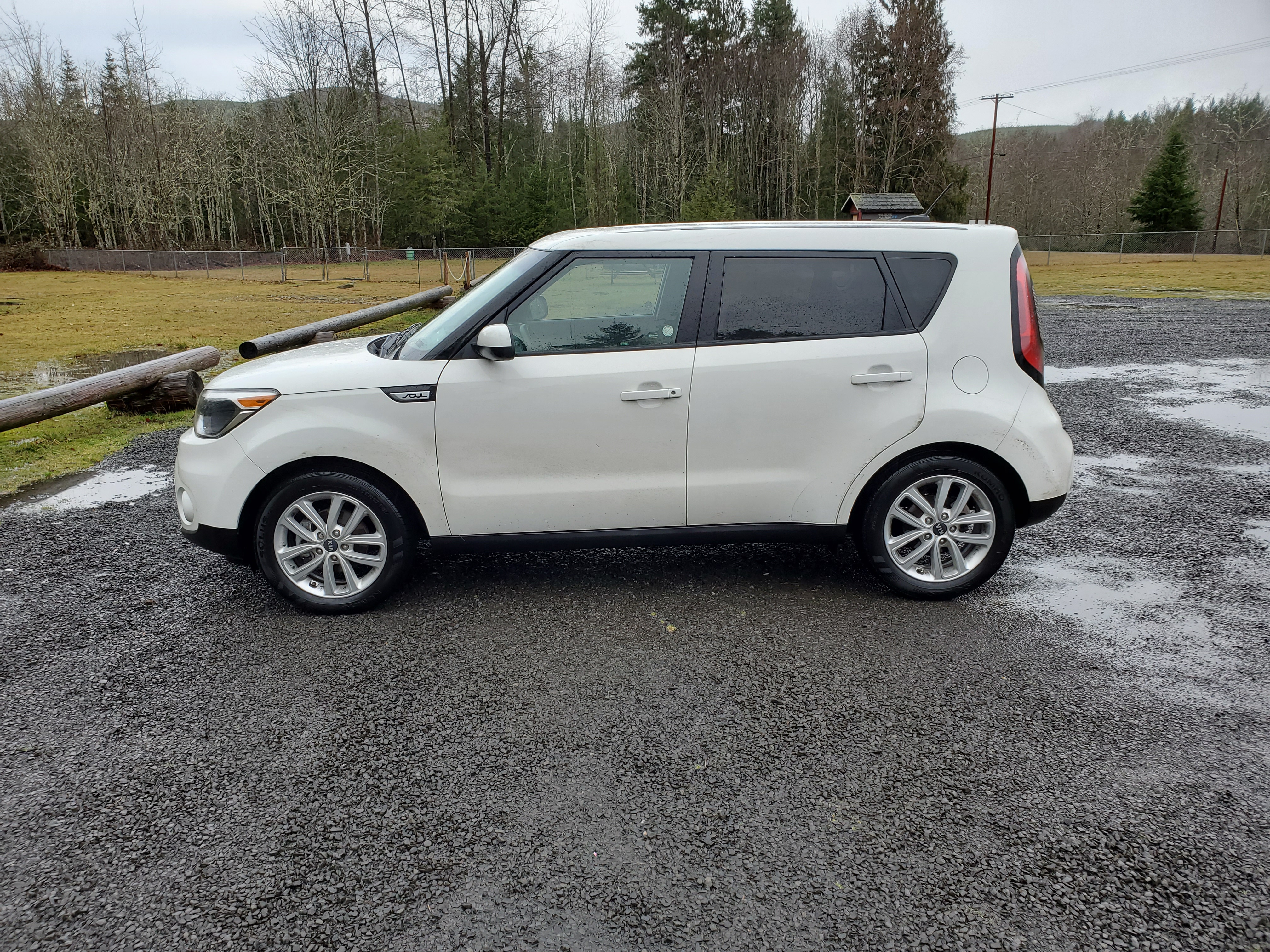 Our hotel was in a great location within walking distance of all our day’s adventures. Good job planning, Dr. Jen! After a standing breakfast in our hotel’s overly crowded breakfast area, we hiked to the Space Needle! I’m pretty proud of myself. I was the first to lean against the window and walk on the glass floor. Even with my oft mentioned fear of falling to my doom, I think I was a bit more bold than Jen. 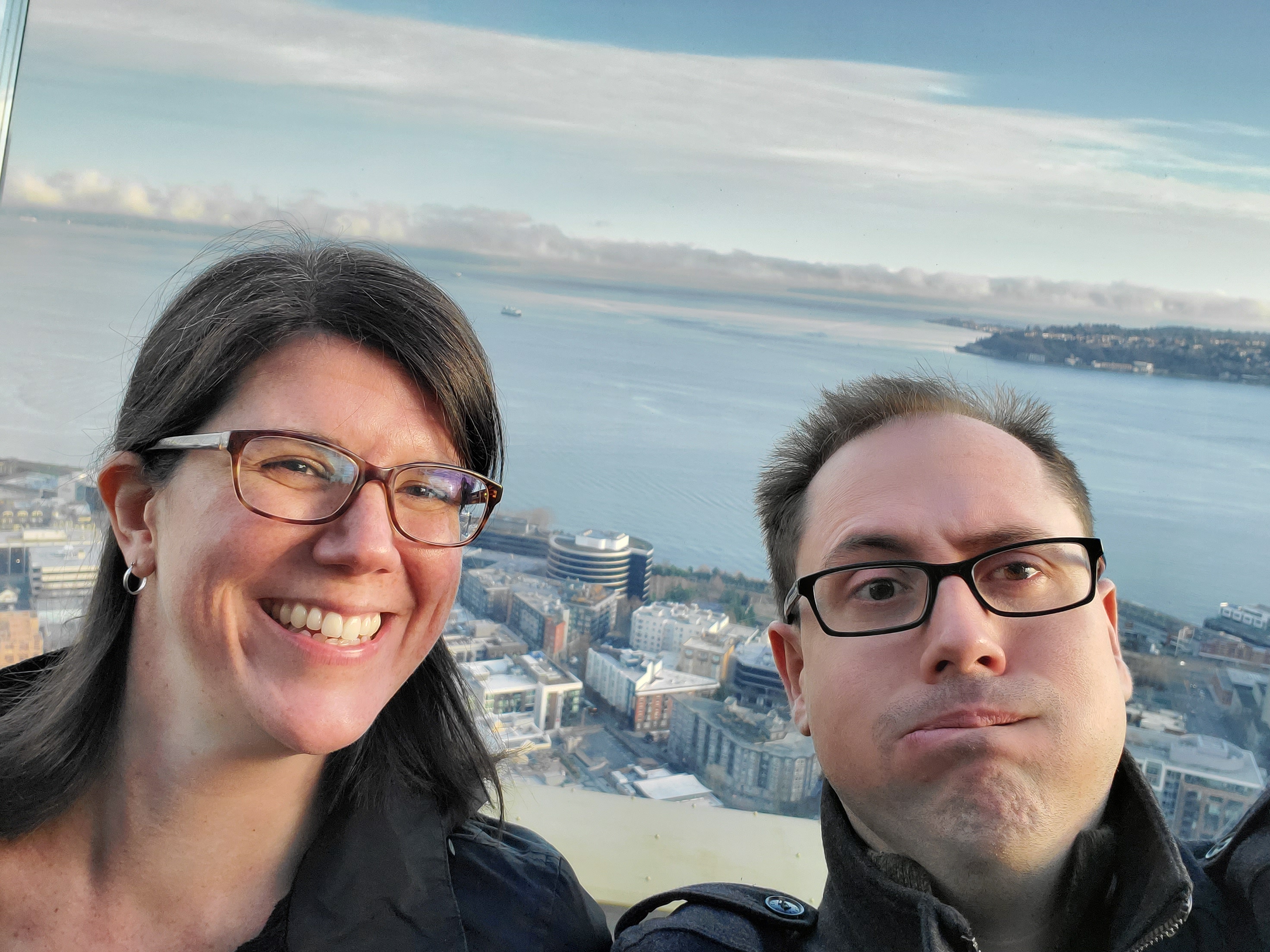 I laid down on the nasty, glass floor but Jen was much classier and sat. That is until the rotation started to make her a bit dizzy. We had a relatively clear day and the views were awesome. I’m glad I pushed through my hesitation and got on the elevator. 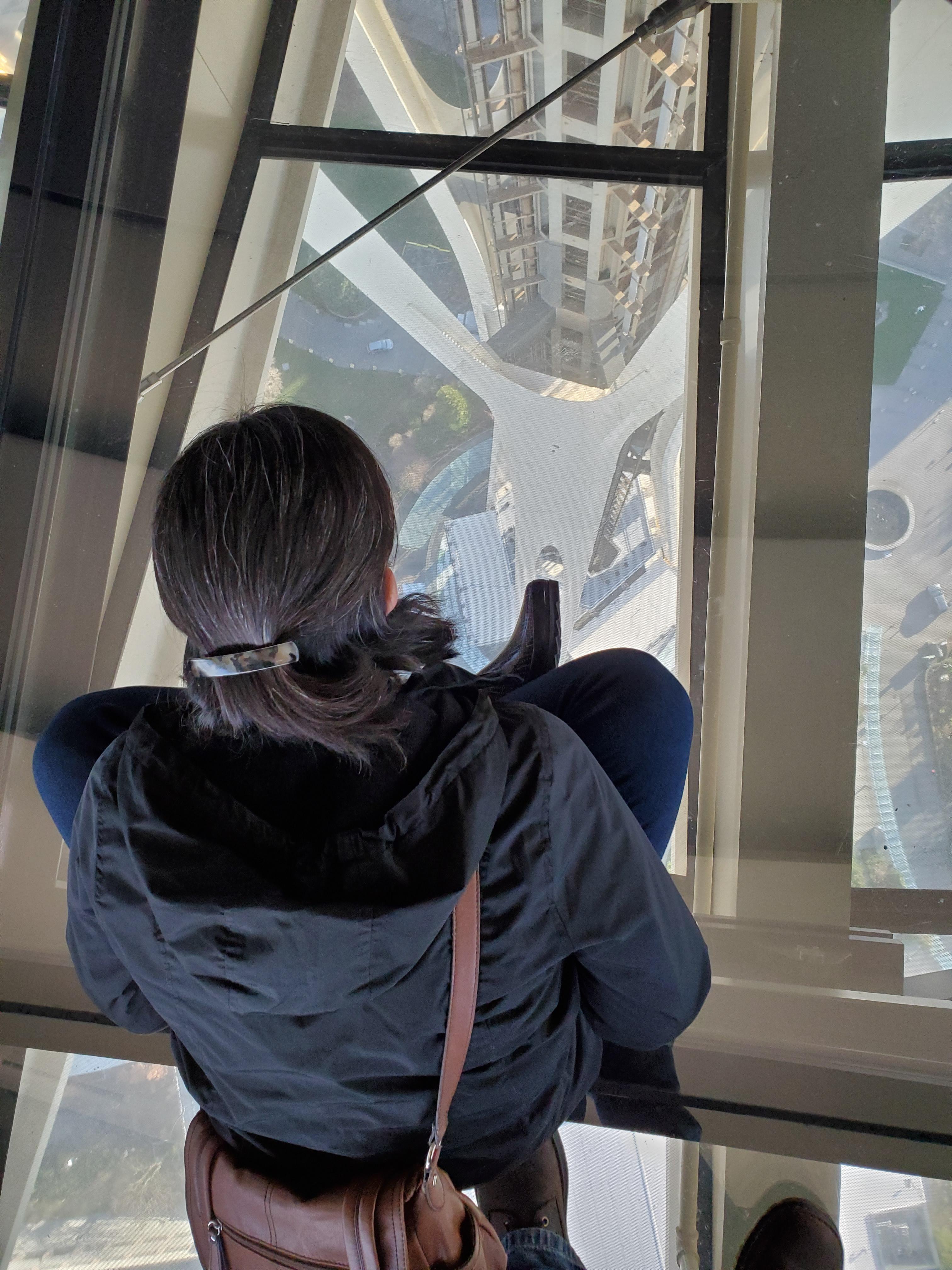 Next door to the Needle is the MoPOP, or the Museum of Pop Culture to the uninformed. Jen had been there before and was excited to show me their Horror exhibit. I loved the fact that they had a life size Crite from the Critter franchise. Also they had a perfect place to pose for photos. 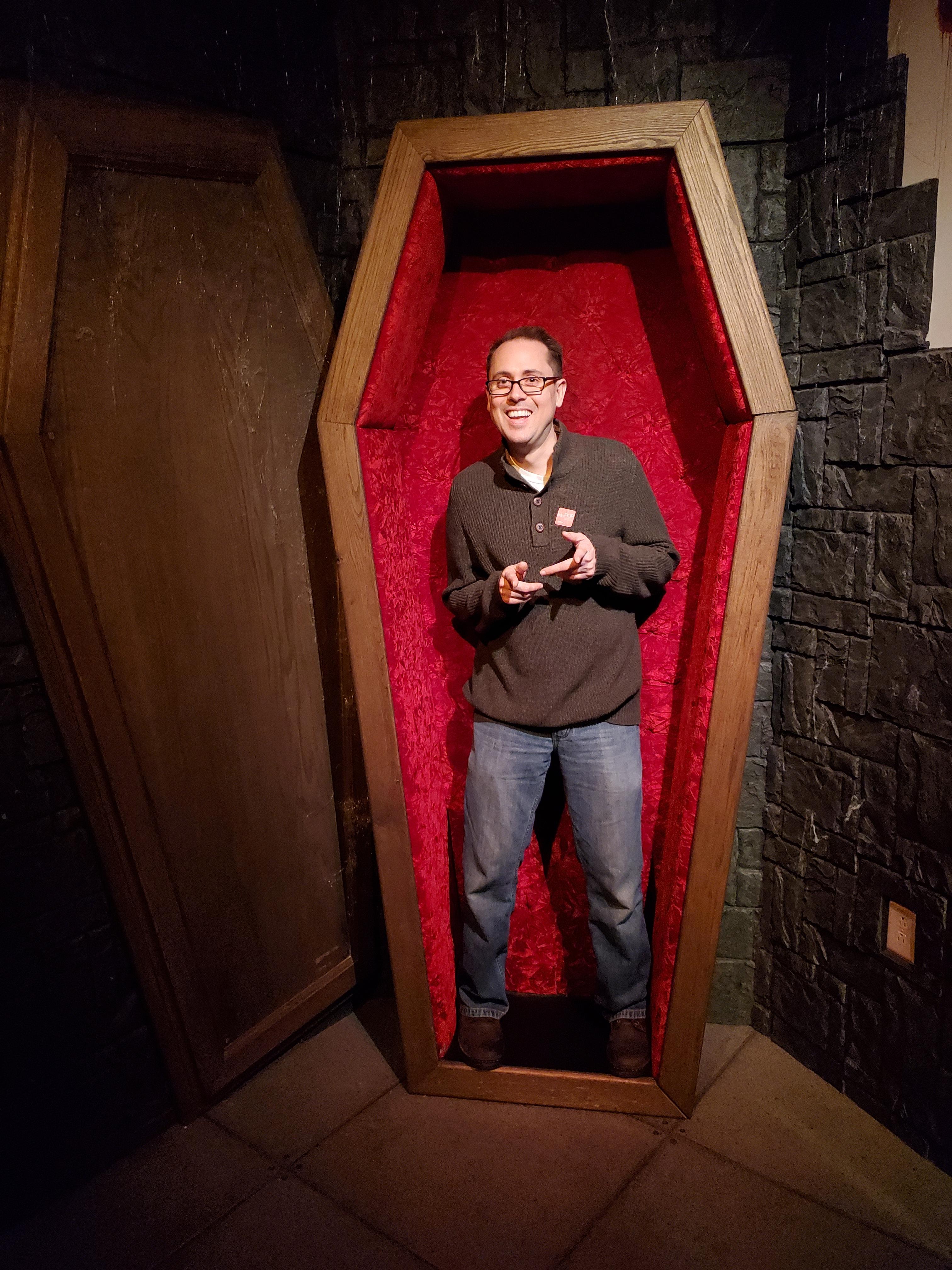 I went for the casual “Hey guy, be seein’ you” vampire. Jen went the more traditional route.

After eating at some little dive bar we ran our butts 1.9 miles to take a tour of the Seattle Underground. We had to wait a bit for our tour so we sat at the bar and were served by the surliest of bartenders. She carded everyone without even looking up. I don’t think she liked her job. The tour takes you through abandoned basements throughout a specific block area. Turns out that a lot of Seattle was built around poop. Or rather around their sewer system. Take the tour, but long story short first floors of buildings were closed when new, higher sidewalks were put in. These (now) basements were condemned because of rats and eventually re-purposed by bootleggers. Now they’re used to entertain tourists. They told us to take random pictures and check them when we get home to see if there is a ghost. I don’t particularly believe in ghosts but what do you think? 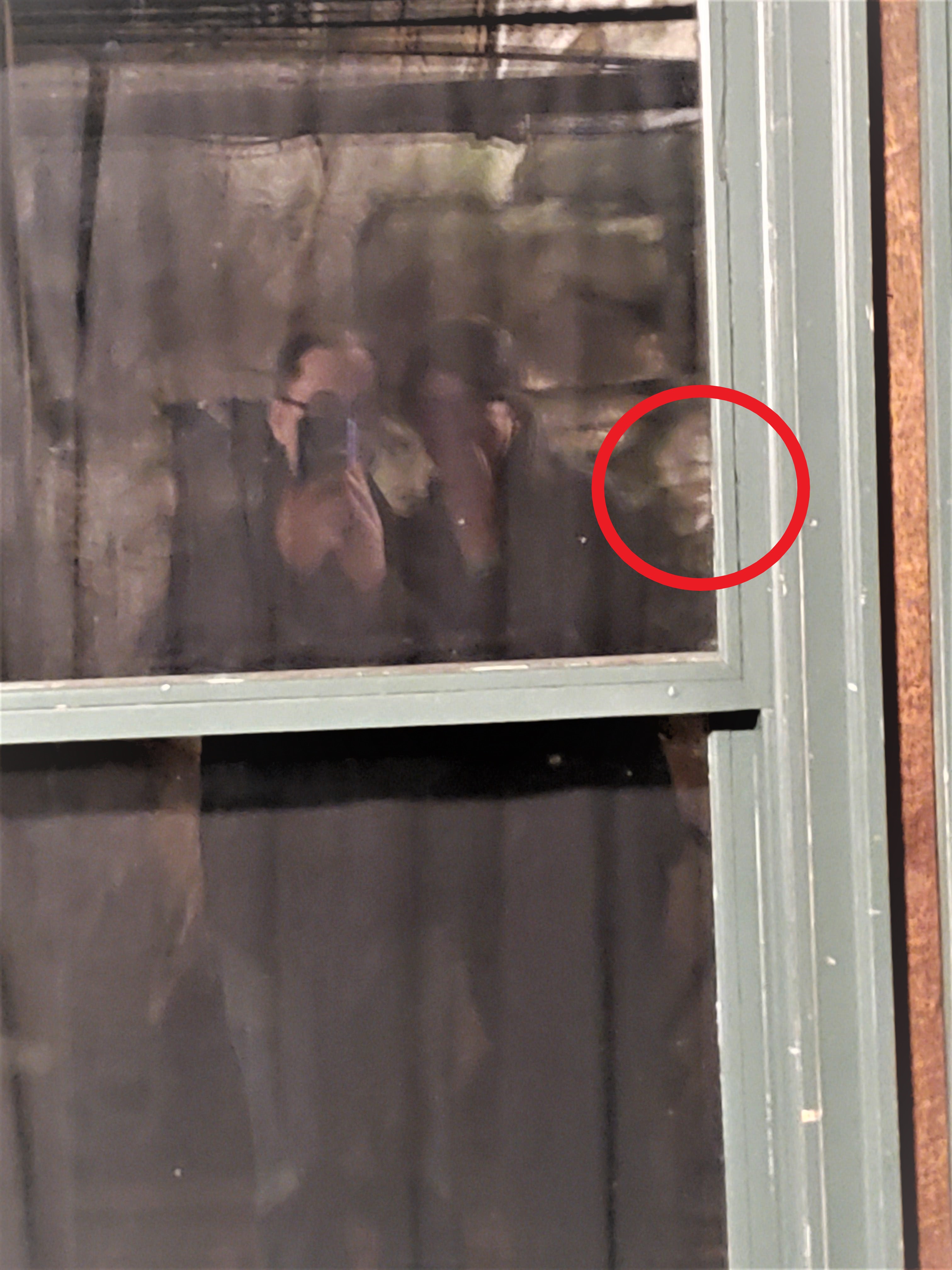 After that we bummed around the pier and saw the Public Market where they do that fish throwing jazz. It was mostly closed by the time we got there, which was fine. The place wasn’t nearly as packed as it typically is. 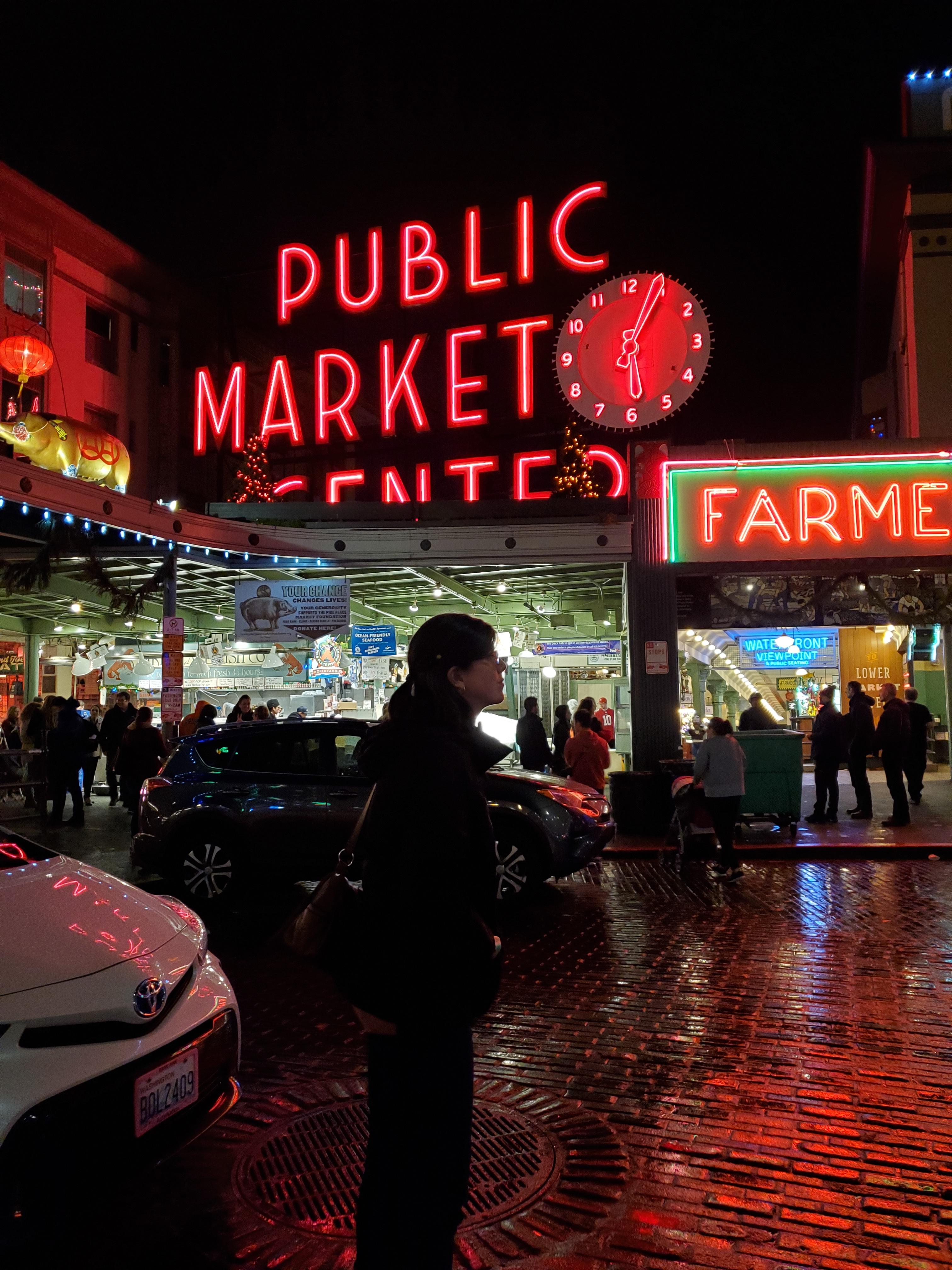 We were on the look out for pennies and the shoe museum, as we are wont to do. The penny expedition was successful but the shoe museum was not working. It was a weird wall where you pay to see the shoes (if you look closely you can see the shoes without paying). The coin slots weren’t working though so the “museum” was out of order. 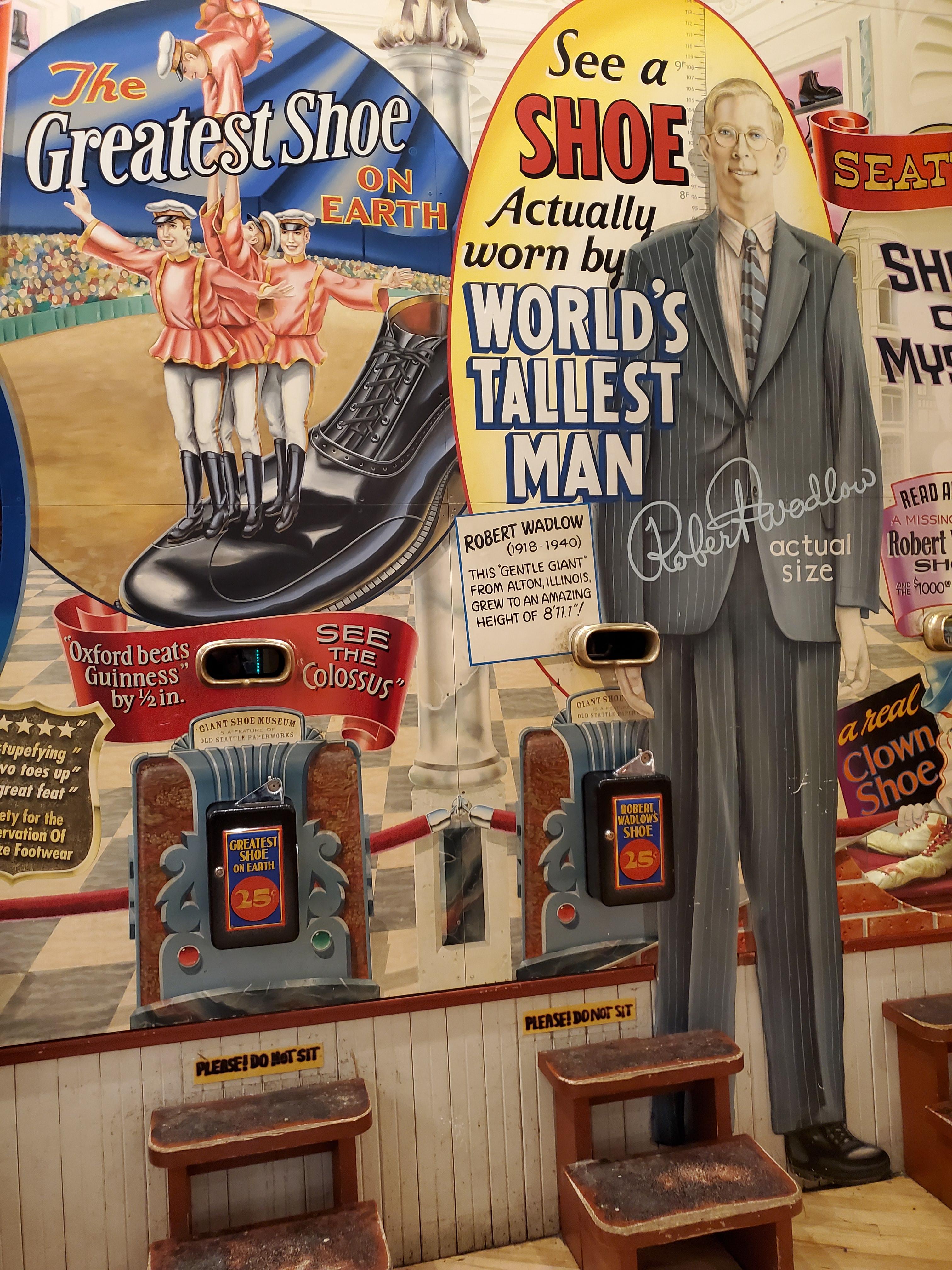 The pennies we ended up scoring were at the Ye Olde Curiousity Shop on Pier 54. This was my kind of establishment. They gave out free pennies, there were music/entertainment machines all over, and many, many urban legends and tacky gift shop items to be found. It was founded by a newly acquired hero of mine, Joseph Edward “Daddy” Standley. I mean, honestly, look at this guy. I wish I could dress like him without being mistaken for a hipster trying to be ironic. 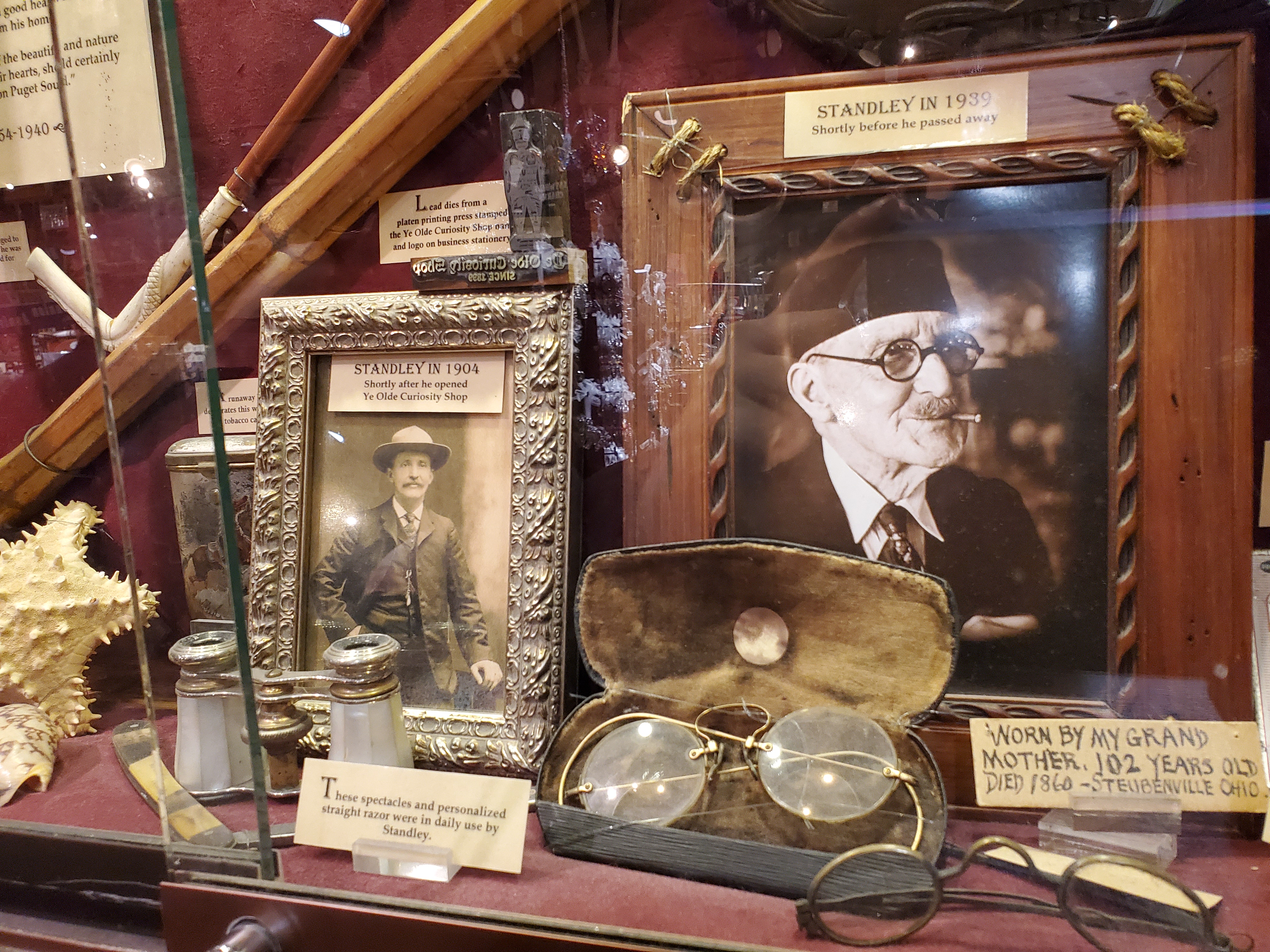 For more information about this American treasure, I provide you his short biography: 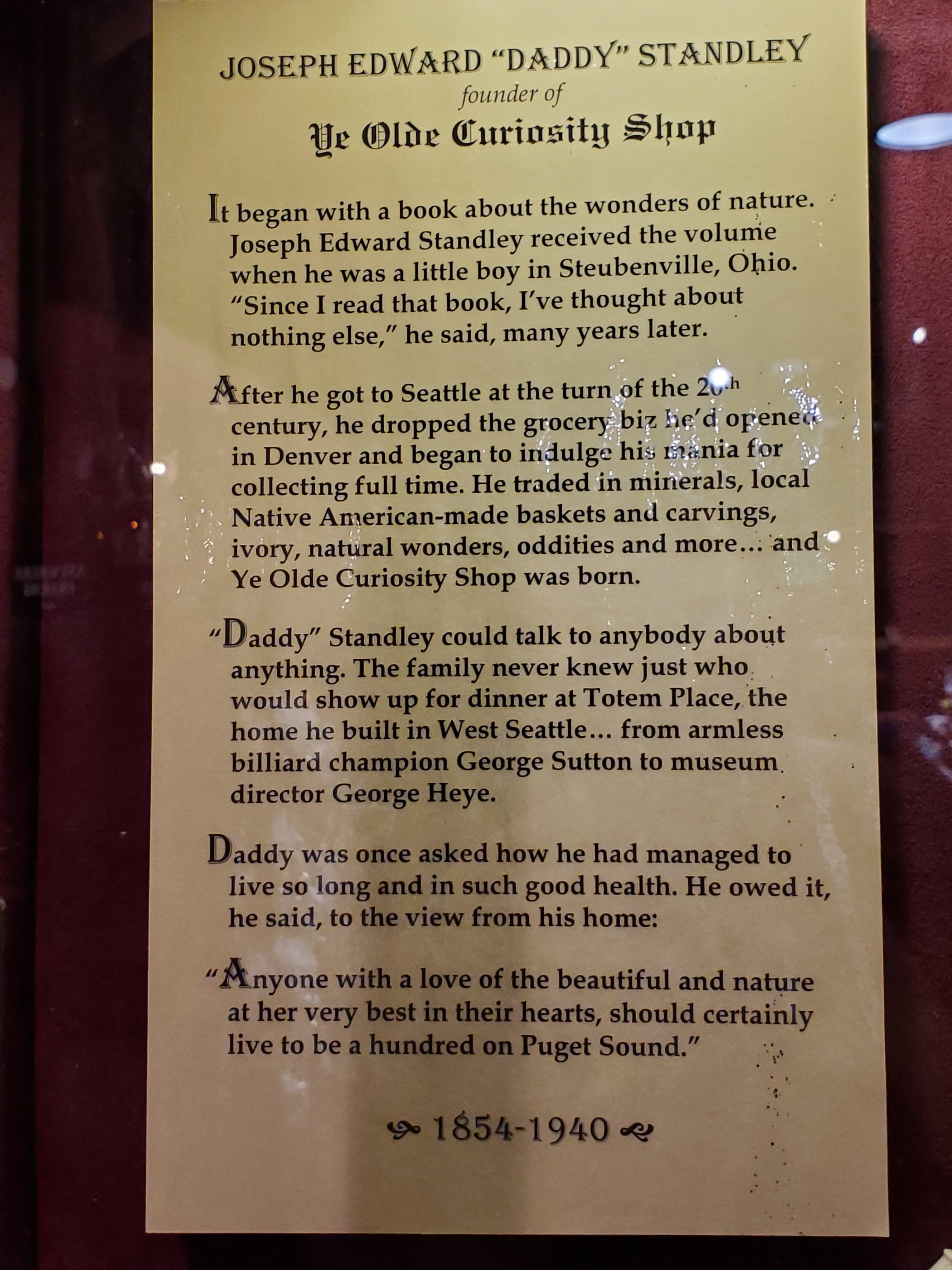 The exhibits are diverse and fun often with playful descriptions of who or what is being displayed. The three highlights are Sylvester, Gloria, and Sylvia. Behind glass in the very back of the store, it’s a bit difficult to get a good, long view through the crowds. Gloria and Sylvia have pretty straight forward stories. 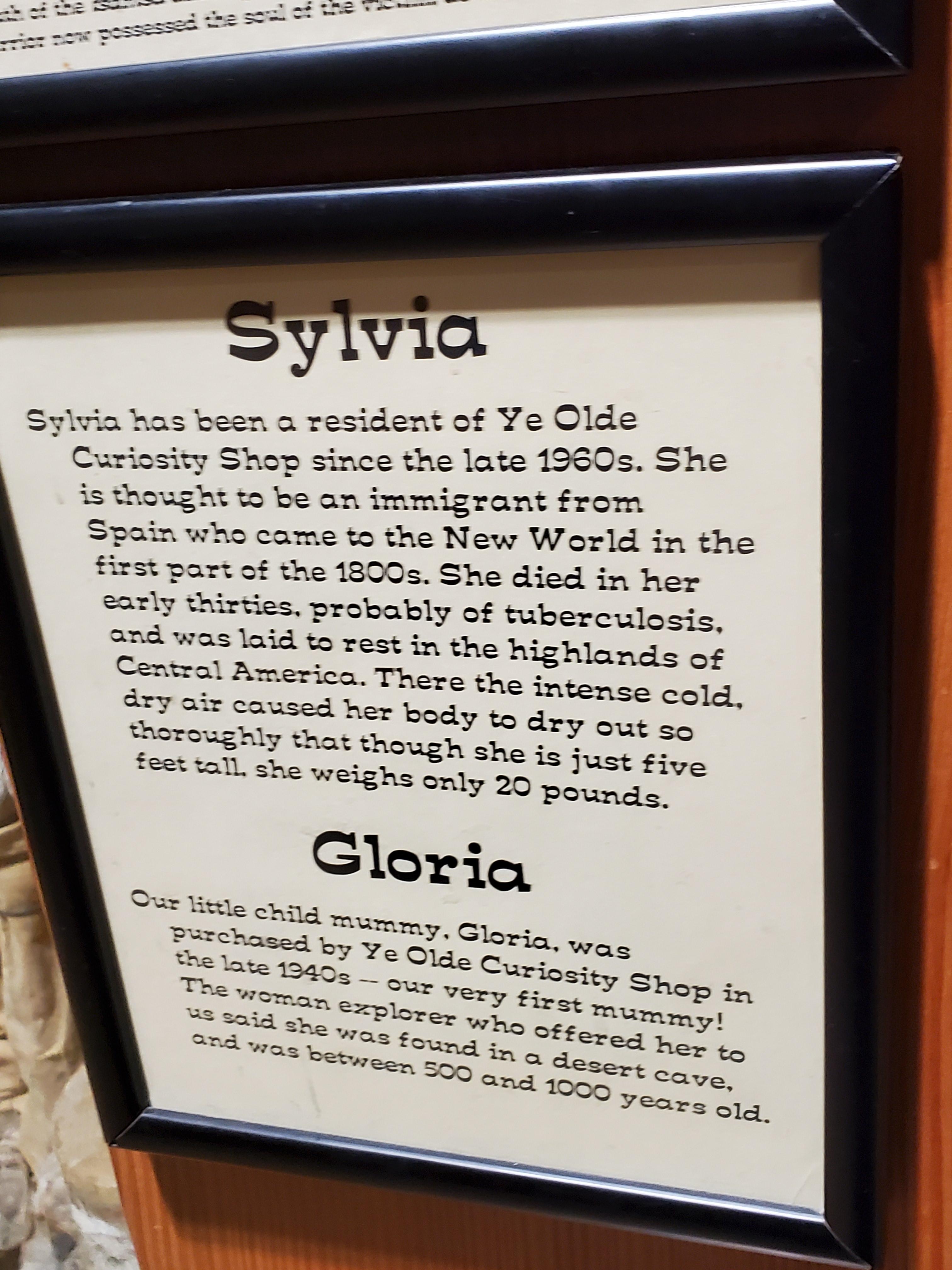 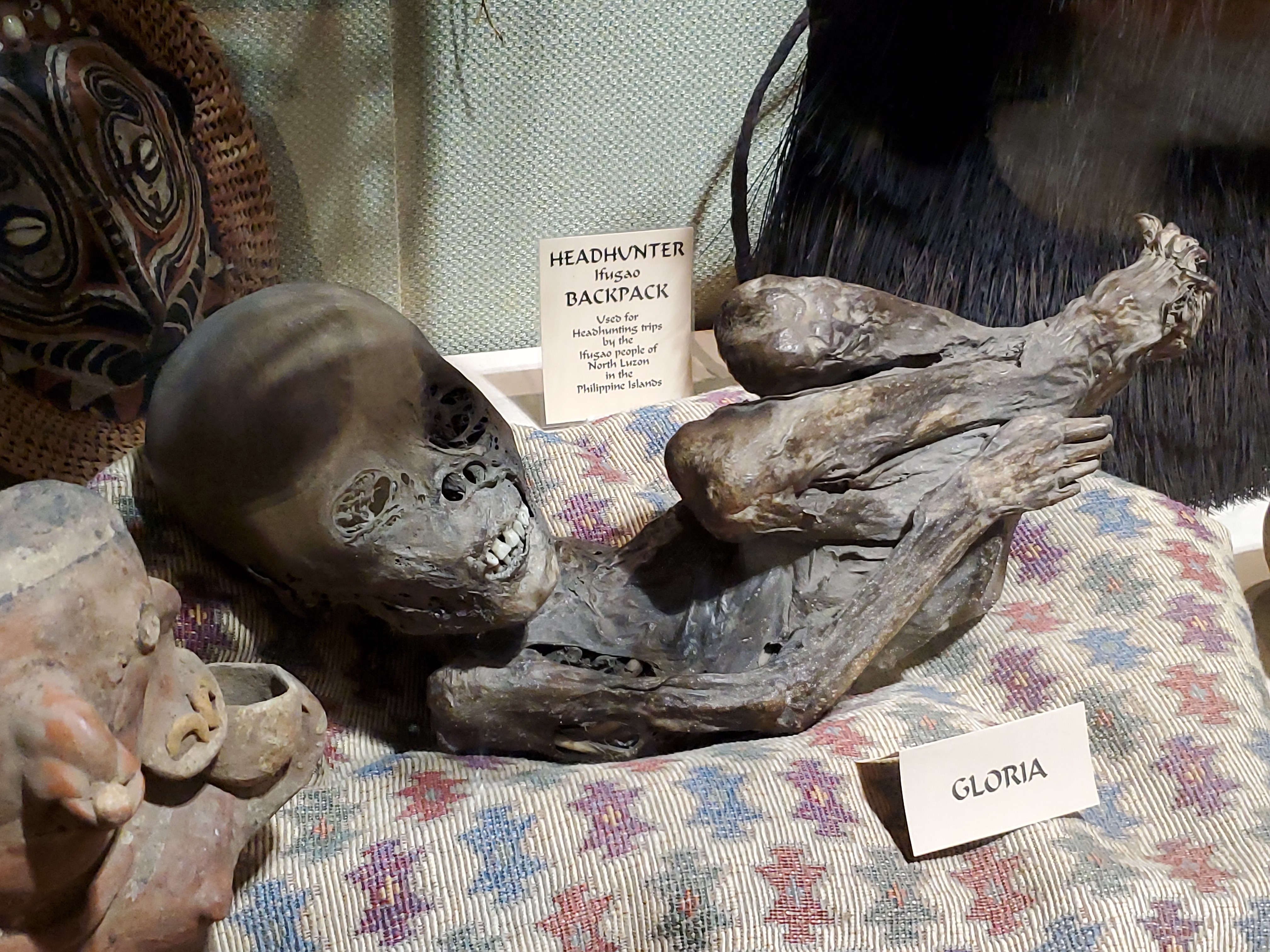 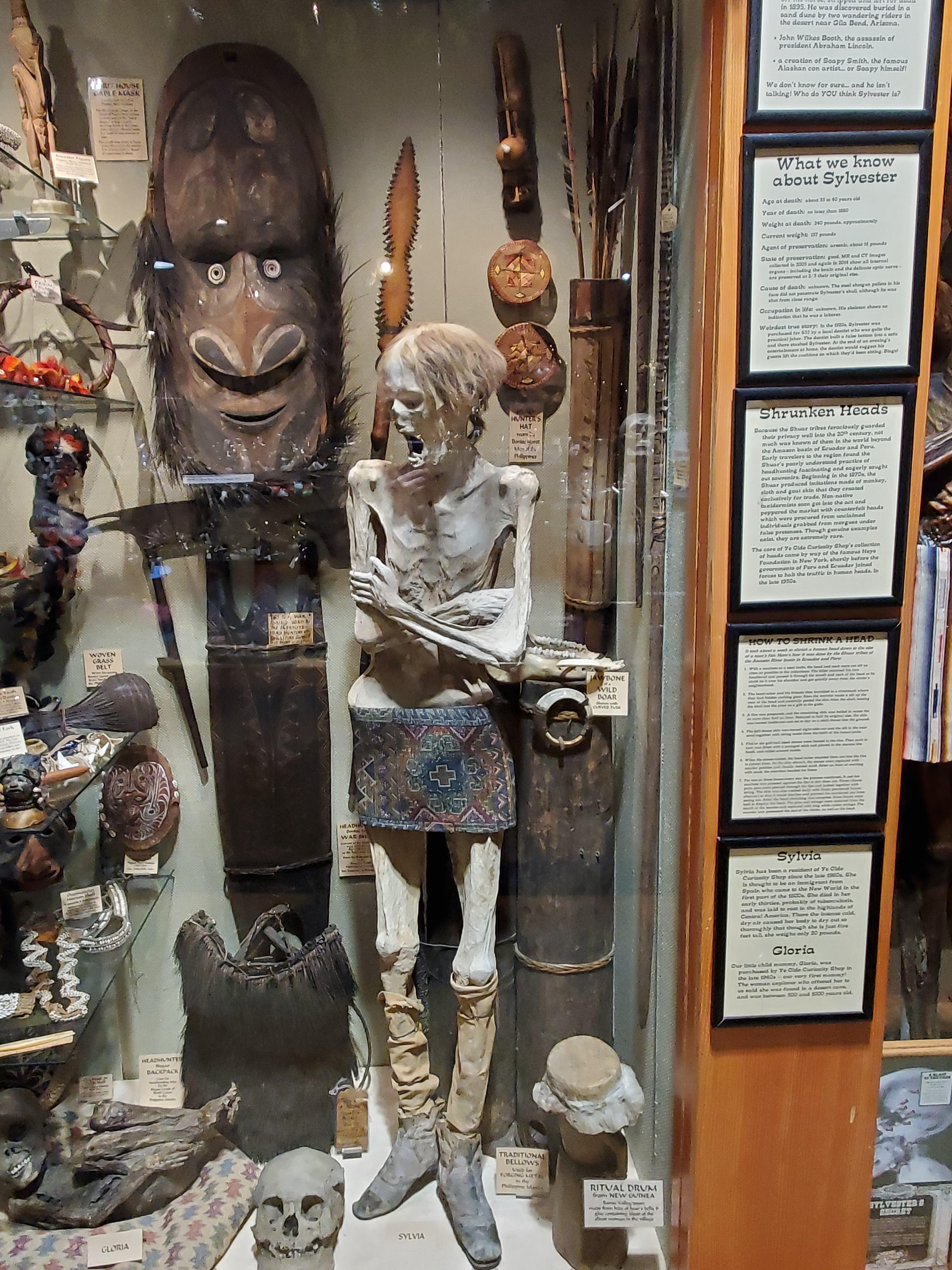 Sylvester is a much more complicated man. His story is steeped in mystery and his mustache tells you he means business. Or rather he meant business…before he got the business…I don’t know, you read about it. Sorry for the blur. 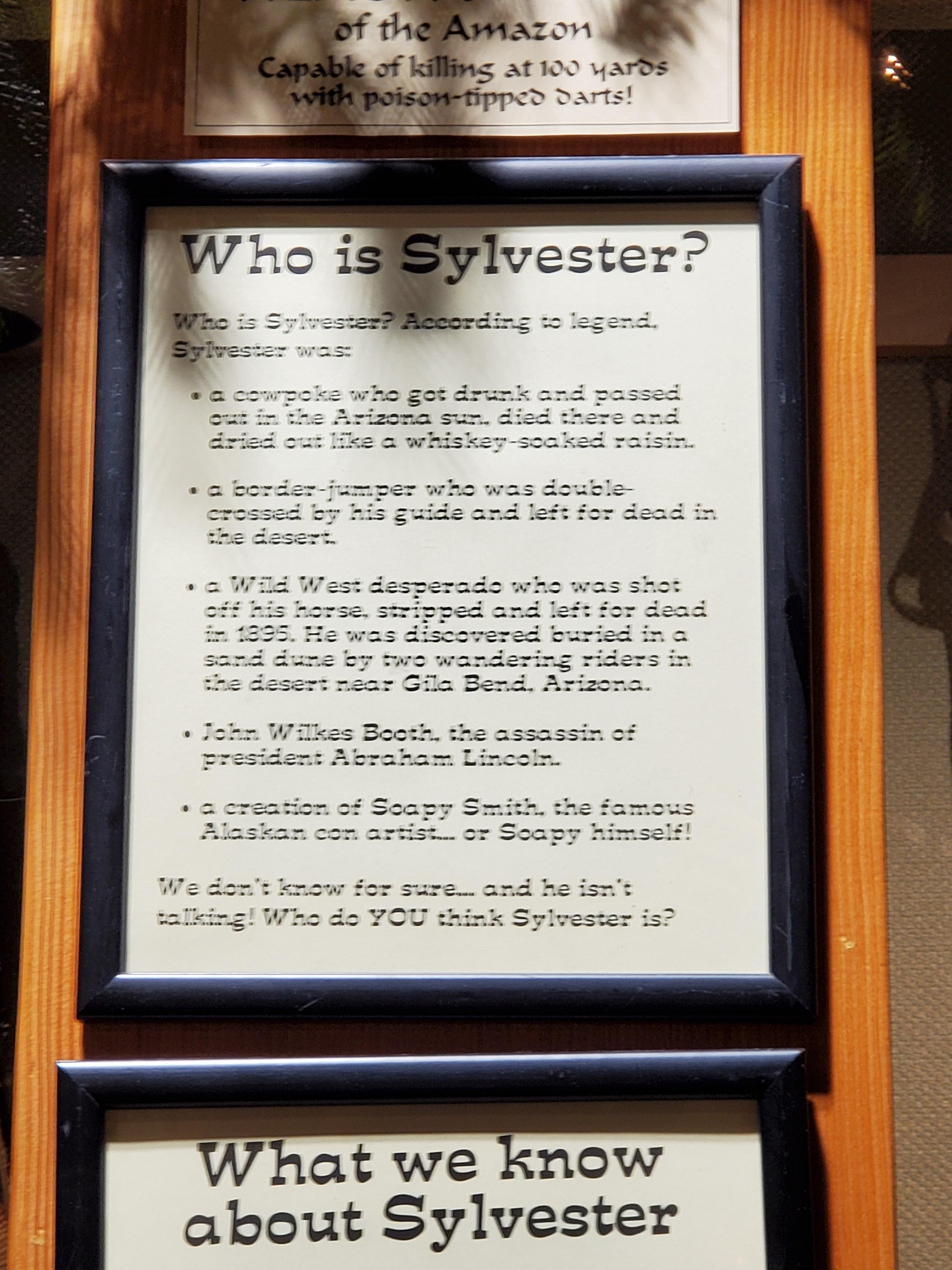 Gaze upon him in all his glory. Even Death can’t subdue the power of that ‘stache. My Civil War ancestor couldn’t hope to be that grand, manly, significant, or dignified. 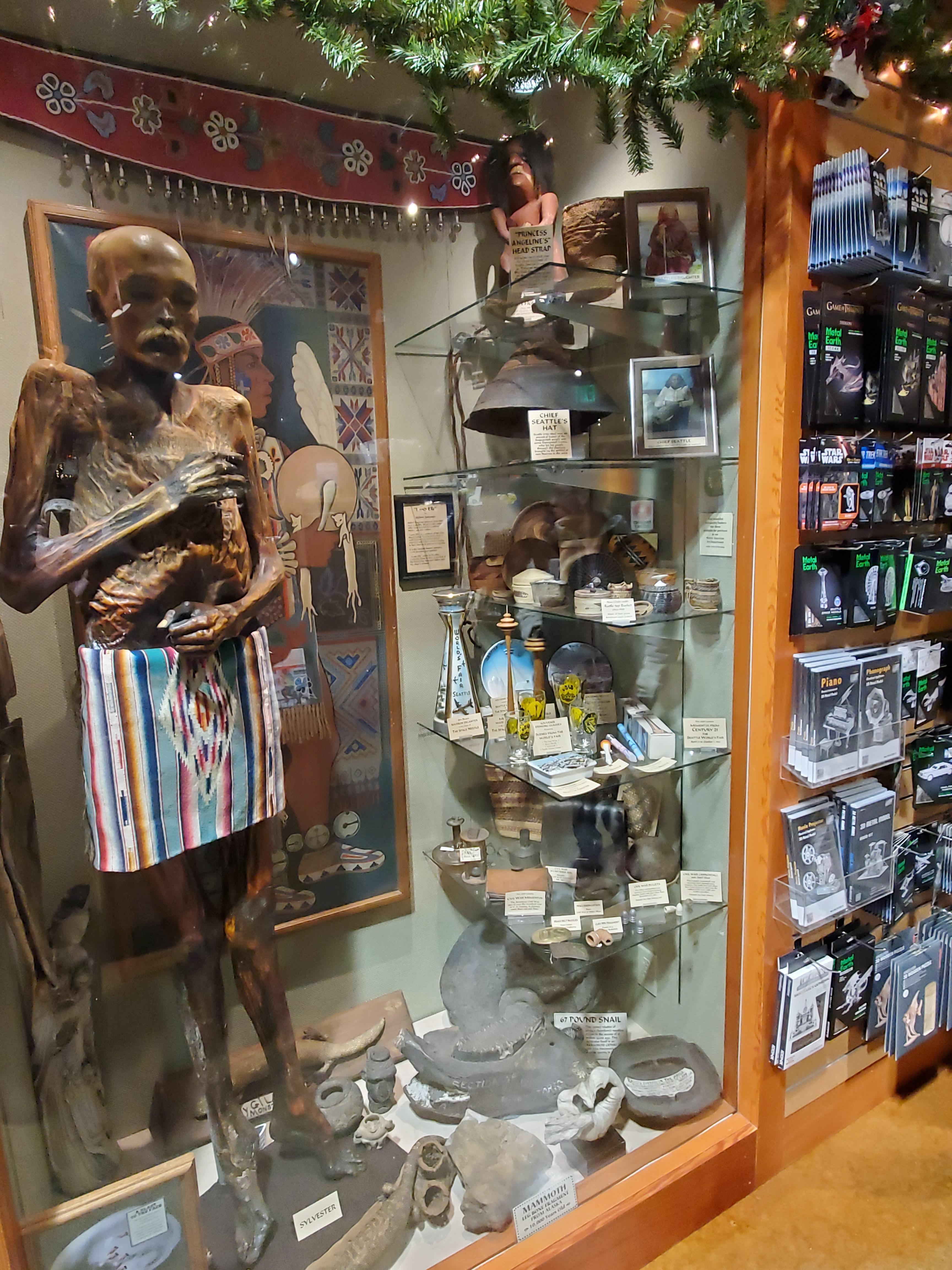 One of the other great exhibits was the scrimshaw collection. I know that scrimshaw is vile and as an animal lover would never purchase it. I do however appreciate the art old sailors could make and enjoy the new “make your own fake scrimshaw” kits. 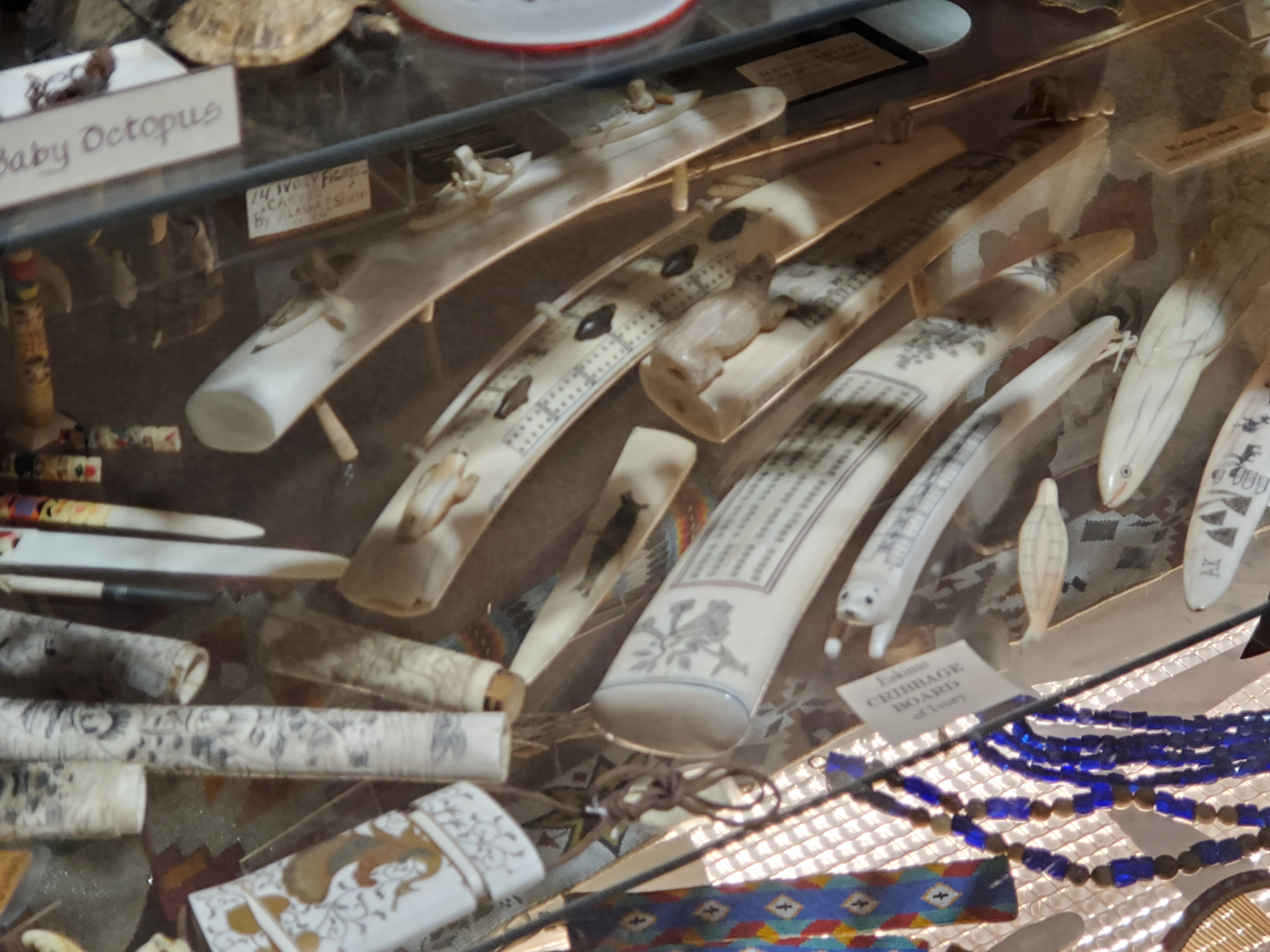 There were a lot of “freak” animals with two heads, three bodies, or what have you. Not a freak but adorable, I had to snap a shot of the baby octopus hanging out by the turtle. 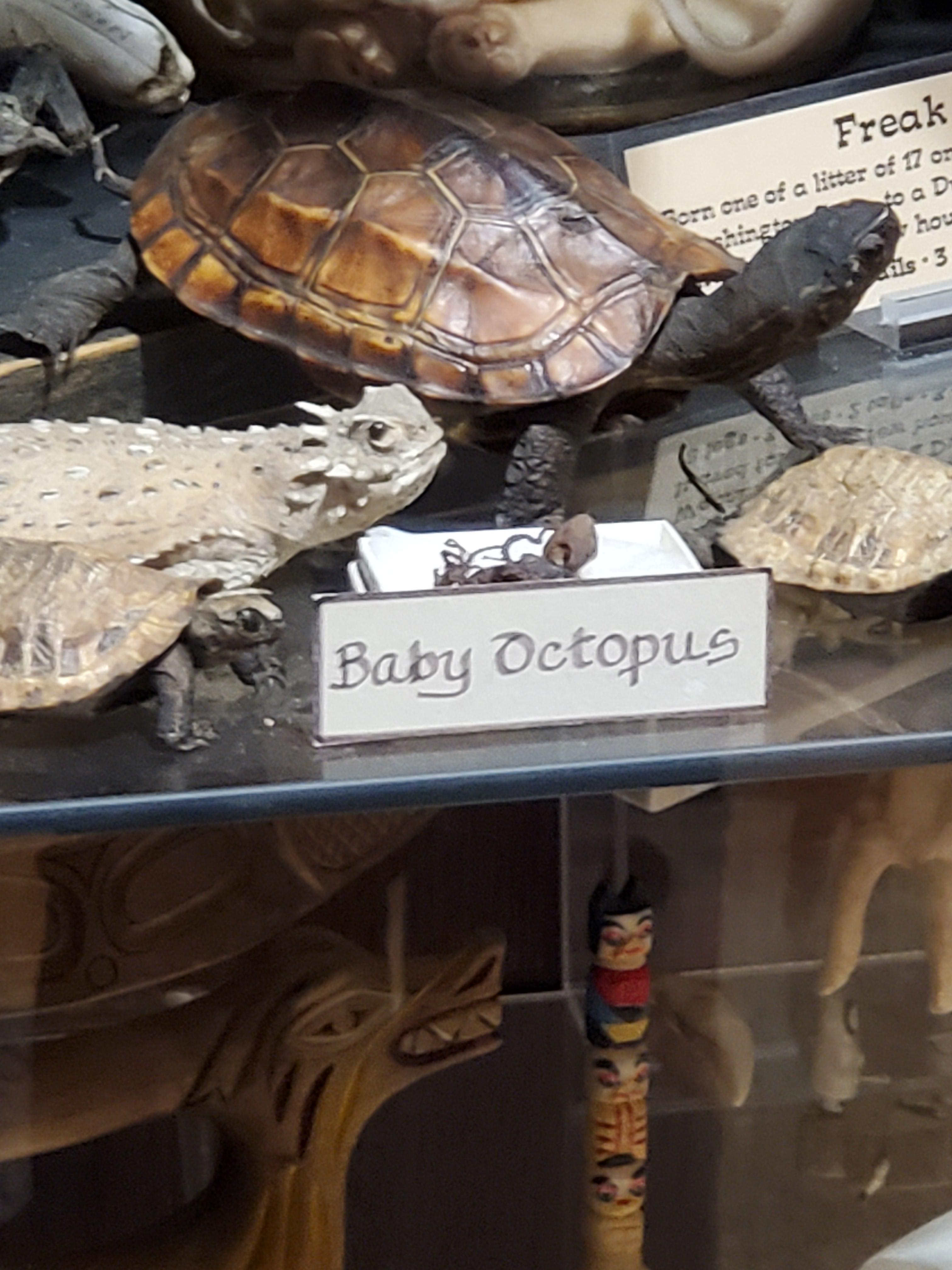 For me, an always welcome sight at these stops is a Fiji mermaid. This was the largest I’ve ever seen! Typically they’re monkey-sewn-to-a-fish sized. I wish to all the Gods that these really existed and were bountiful in our oceans. Can you imagine how terrifying a ride on a paddle board would be if a school of these guys came out of the water screaming? I assume they would scream… 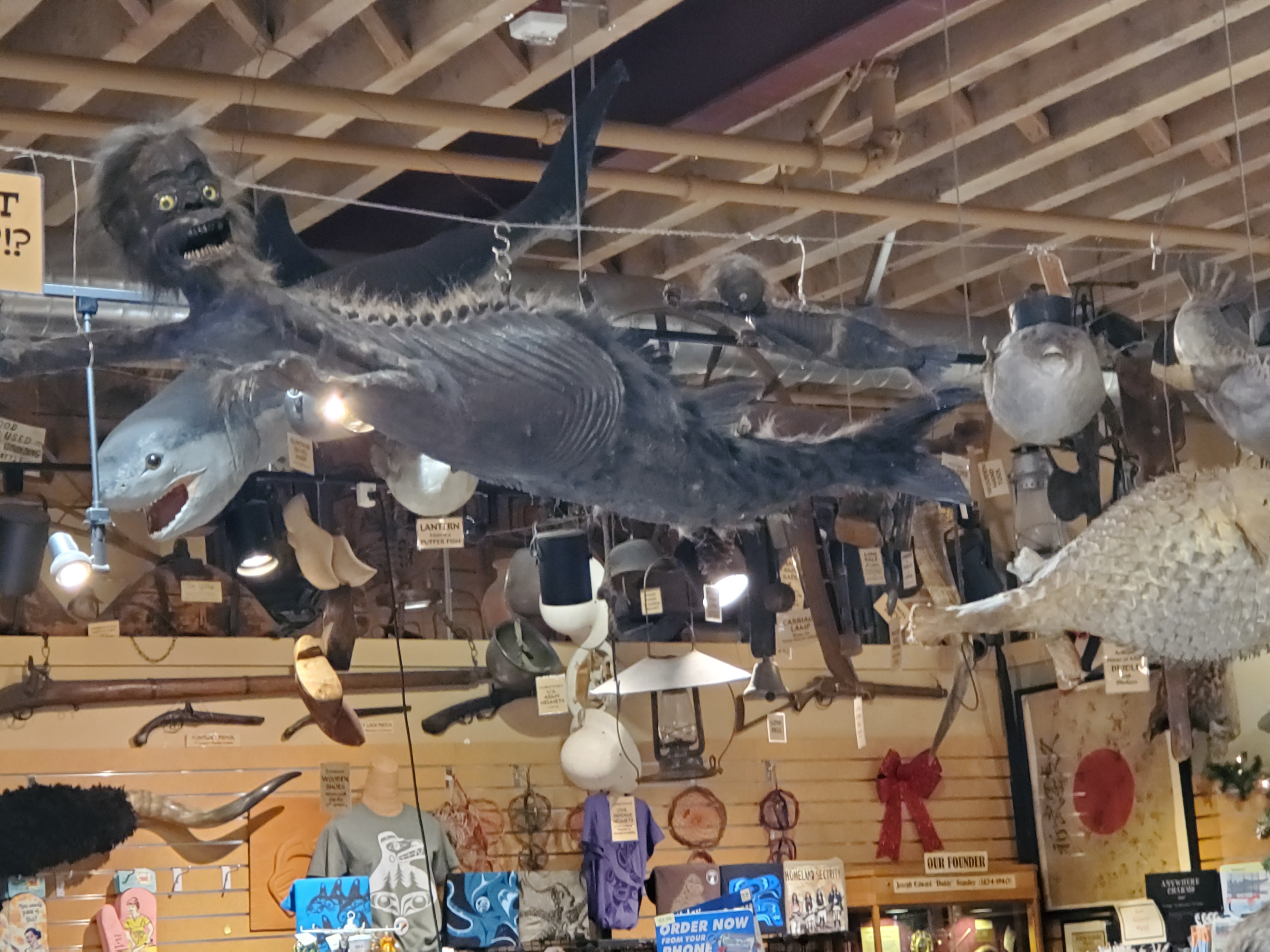 You can’t have Fiji mermaids without a few shrunken heads, am I right? It’s like turkey without the gravy. Why even bother? 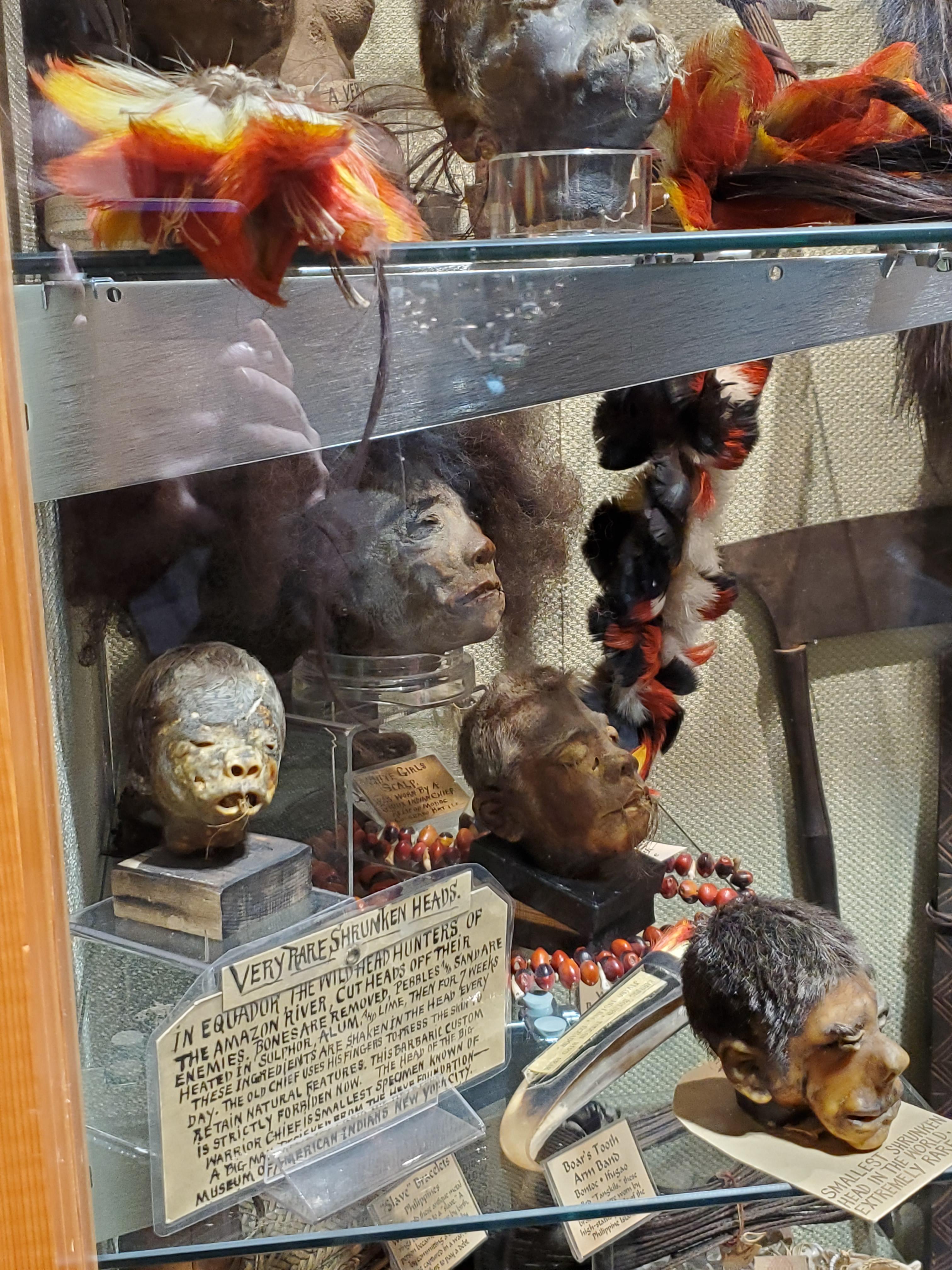 And that’s how we spent our first day in the Pacific Northwest. Stay tuned for MAGA Sasquatch, the Goonies, dinosaurs, and more!