On my recent excursion to the Pez Visitor’s Center I passed a billboard advertising pancakes voted to be the best in Connecticut. I wasn’t hungry but was curious about who gets to vote on the pancakes and how good Connecticut’s best really were. In conversation with Dr. Jen, we came up with a great idea for a sort of reoccurring blog column. I eat at diners all the time on my travels (as everyone on a road trip should), so why shouldn’t I intentionally seek them out with all of my other tacky and weird sights? And if I do seek them out, why shouldn’t I review their pancakes? So that’s what I’ve been doing, and along with gaining weight I’ve been having fun.

Traditionally I like a patty melt when I’m at a diner. I always take notice of the decor, the fries (batter, frozen, crinkle, etc.), staff, and customers. I rarely get it, but I always make sure they serve rice pudding. A diner that doesn’t serve rice pudding can’t be trusted. One thing I never really focused on was comparing the many diners I’ve patronized to each other. I decided to do this I’d need some kind control for my experiment, and at Chip’s Family Restaurant (est. 1966) the control became pancakes. Why not? Their “award winning pancakes” are what brought me into the place and all diners serve them. I intend to taste each hotcake plain, then with butter, then with the syrup(s) and butter. I have chosen as my knight errant’s quest the task of finding the best pancakes in all of America’s many diners and presenting my findings to you, good reader. I sacrifice my waist line for you.

This place was alright and had some nice highlights. First they had their own maple syrup in a nice glass bottle and provided softened, whipped butter in cute little cups. I hate when they give you frozen butter and it jacks up the pancake as you smear it on. There were also other assorted syrups available in the traditional little pouring servers. 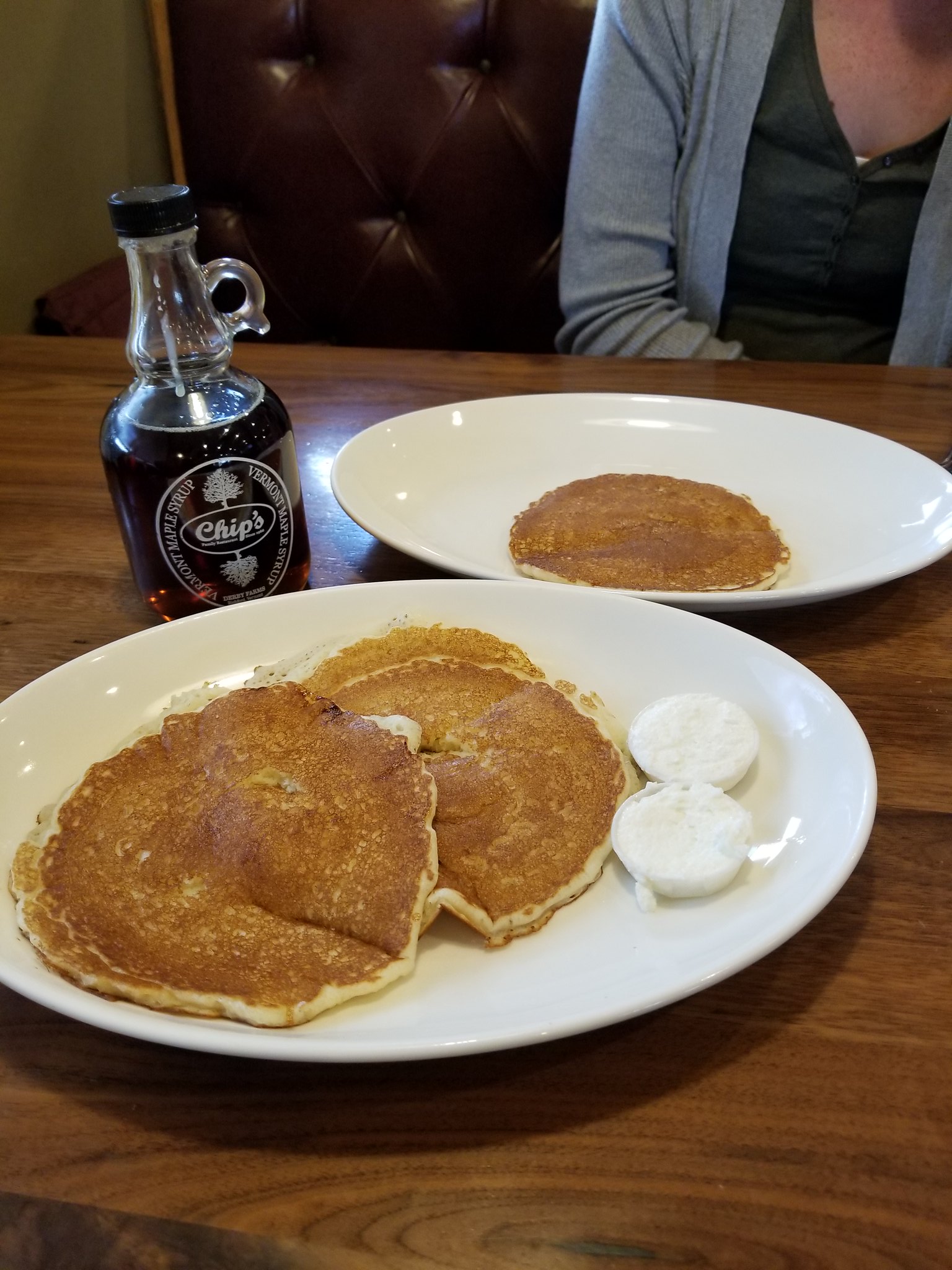 Here are our notes:

For diner number 2, I wanted to check out a place close to home. Arner’s Diner was known for their pies and a sad salad bar that was available open to close. How fresh can those veggies be if put out at breakfast and left through dinner? Doesn’t matter any more though. I got there and the place was closed down. It had been around forever and I took for granted it would always be there. In my defeat I settled on going Denny’s but found directly next door the new Smiley’s Diner! 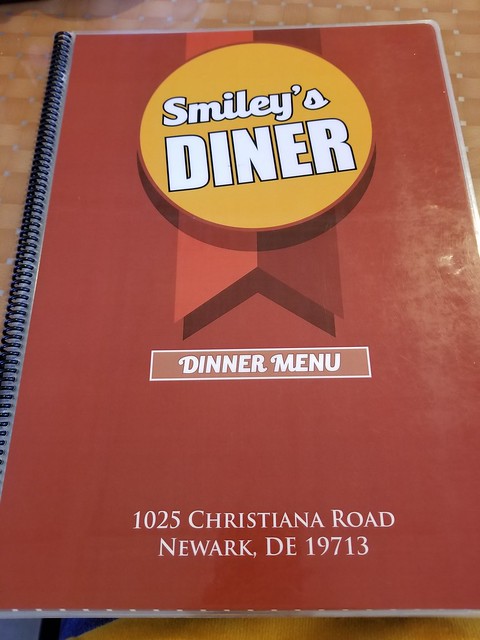 The building use to be the sketchiest, worst Pizza Hut ever and it’s history is still evident from the unchanged and familiar architecture. I’m curious how this place is going to do sharing a parking lot with a Denny’s. They’re around 100ft a part and sell basically the same items. Not my problem, let Smiley worry about the ramifications of opening a restaurant adjacent to established competition. 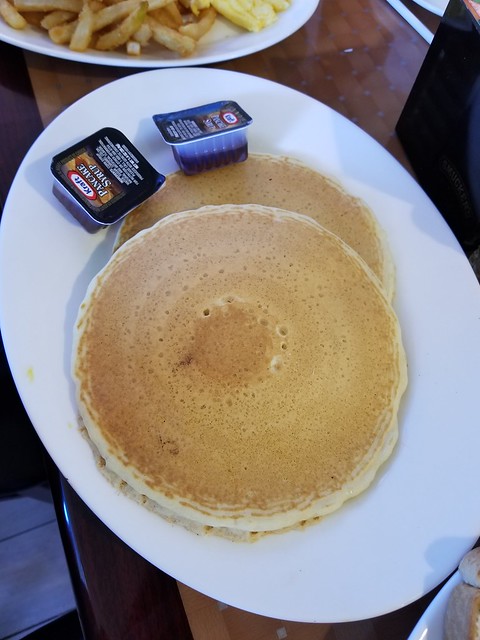 The short stack wasn’t anything special to look at and the syrup came in those little sealed cups. The taste was very floury and most certainly came from a box. They were large but not great. I wouldn’t say they were bad but it’s not something I would order from there again. They did have rice pudding though, so I wouldn’t be opposed to returning and trying something else.

Final Score: 2.5 Pats of Butter. The staff was nice and it had a fun feel but it was ultimately blah. There was nothing remarkable about this place.

A future post will contain my recent trip for a Gertrude Hawk Chocolates factory tour. On the way there however, I must have passed a dozen diners in the Quakertown-Coopersburg, PA areas. On a side note, Quakertown looks awesome and I can’t wait to go back. Anyway I decided this trip should be attempt 3 at pancake tasting. Heading north we plopped into The Coopersburg Diner & Family Restaurant. 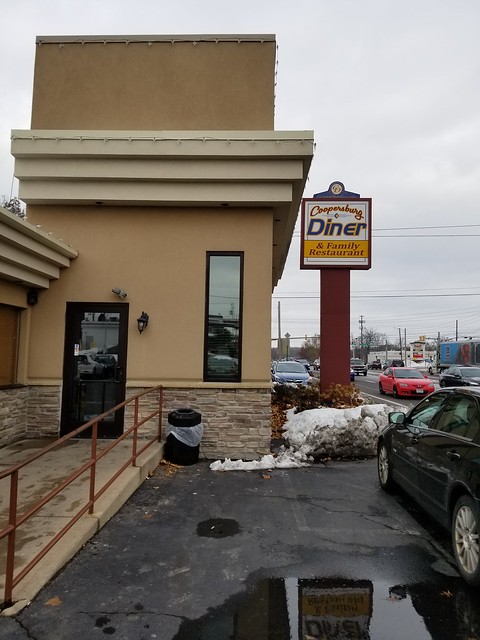 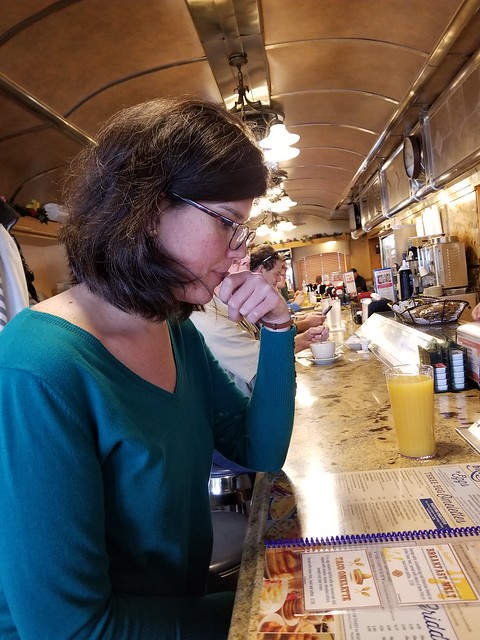 There was a line but we’re pro diner diners. We sat at the counter with the rest of the regulars who flirted with the waitress, ordered “the usual,” and talked about spending Thanksgiving dinner at the restaurant. I guess we aren’t too much hardcore however, as we were the only 2 out of the 5 people at the counter who didn’t order the cream chipped beef. Either way, this place had a great vibe. 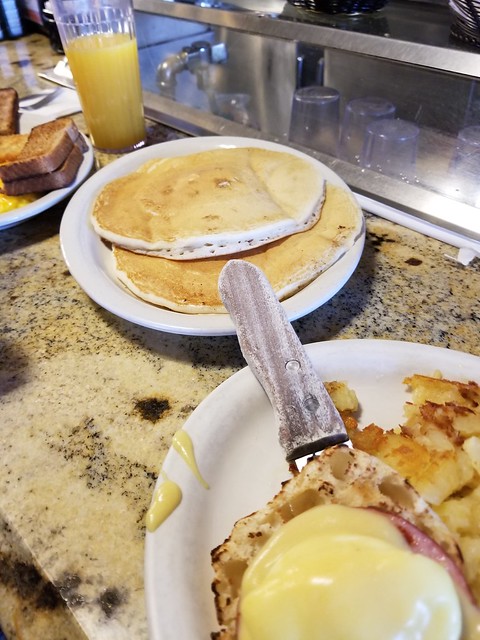 Along with the short stack we shared, I got some eggs benedict. I was not disappointed. But now to the nitty-gritty of the pancakes. It started off poorly as the butter was frozen solid. On top of that the syrup was Smuckers served in those little sealed cups which gives the place a chain atmosphere. Regardless of these first negative impressions, these were the best pancakes I’m reviewing in this post. They were fluffy with a sweet taste to them. They were obviously homemade without that strong taste of flour. Damn right I’ll stop by and have these again. I almost wish I had ordered a full stack and skipped the eggs.

Final Score: 4.5 Pats of Butter. I would have knocked it up to a perfect 5 if it wasn’t for the rock hard butter.

The next morning we decided on more pancakes! We headed just down the street from Dr. Jen’s place in West Chester to the DK Diner. The place is small and cramped by the door but the wait for a table was short. There weren’t any seats at the counter for us to prove we’re awesome diner people. 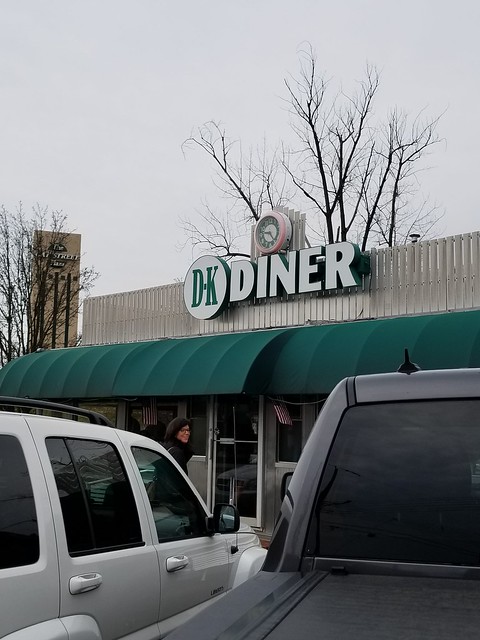 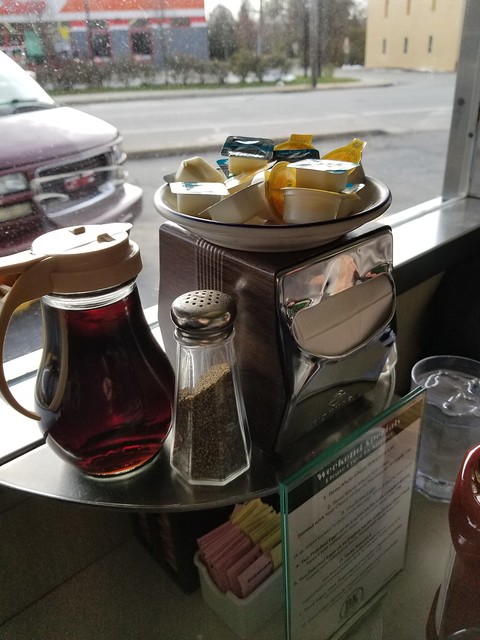 The bad is that the pancakes totally tasted like they came out of a box. We ordered 1 traditional pancake and 1 chocolate chip. The CC was good but I felt it lacked a proper amount of chips. The butter was in a little bowl waiting on the table already so it was nice and soft. This place was a winner though and here’s why: 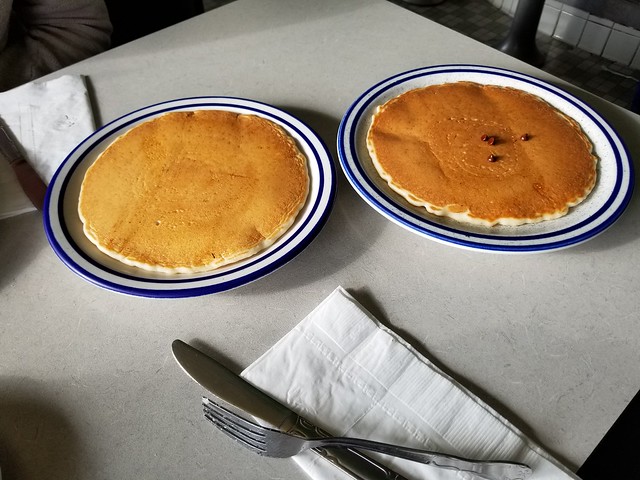 Final Score: 4 Pats of Butter. The pancakes only earned a 2 or 2.5 but the experience and personality killed at this place. And as Jules said “Personality goes a long way.” 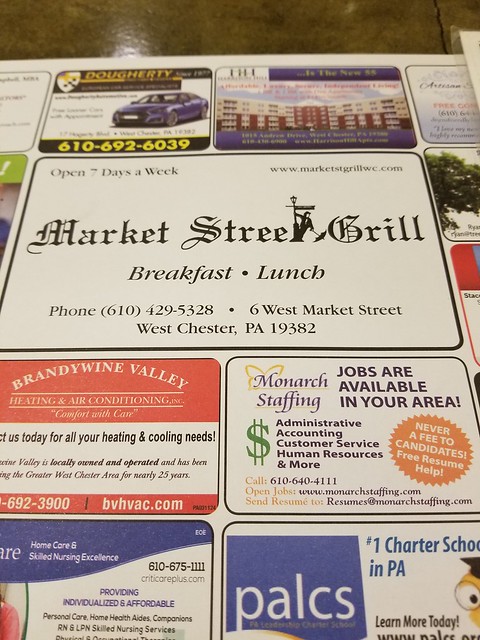 Two more to go, stay with me here. Keeping it in West Chester, the following Sunday we found our way to the Market Street Grill. West Chester is a college town and I feel like this is the family and hipster place to eat. It was a bit cramped with people waiting outside trying to get a table. We shouldered on in and sat at the counter!

This place had a lot going for it. Like so many others, the pancakes tasted like a store bought mix but the taste was masked by the powdered sugar on top. Add on to that the syrup was served warm and the butter whipped into a soft cloud and you have a tasty short stack. Notice the side cut photo below and you can get an idea how light and fluffy the cakes were. Along with our shared short stack I got this huge mess of hash browns, onions, peppers, and scrambled eggs all smothered in an andouille sausage gravy. It was so good but too big and so greasy I felt pretty gross the rest of the day.

Final Score: 4 Pats of Butter. Although they got a lot right, this place didn’t match the atmosphere or taste of Coopersburg.

The final review for this post is for the Westtown Amish Market in West Chester, PA. This place is amazing. Every cheese, meat, Amish furniture, pastry, or bread you can think of is sold there. I watched as Amish children, way too young to actually be allowed to work, scurried around clearing tables, putting filling in fresh donuts, and scooting carts full of various items all over the place. I did a pickle tasting at a counter that sold more varieties of pickles than I dreamed possible! I plan to go back soon and buy loads of carbs.

The eating area was small. We had a table directly between the kitchen entrance and within arms reach of the cash register/host stand. It was a cramped area and we were bombarded by people on all sides. Strangely a guy really wanted our table and passed up other seats waiting for us to leave. I feel like it was the least desirable space, we were thinking maybe he had a creepy crush on the young Amish lady. As for the pancakes? They were Dr. Jen’s favorite from all of our destinations. I thought they were good but a tad flat. They were super tasty though, I just wish they were fluffier. 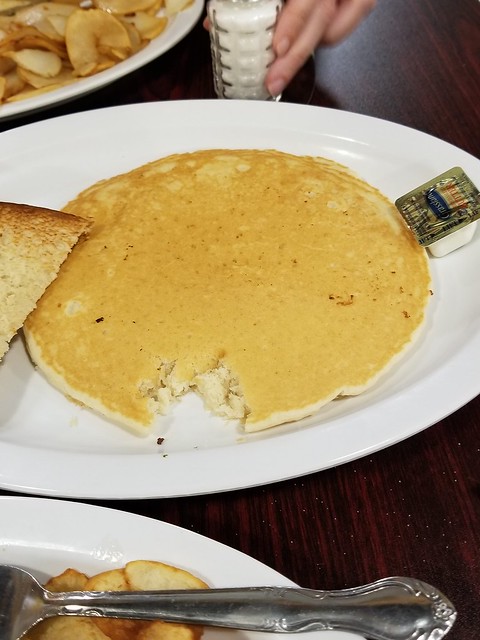 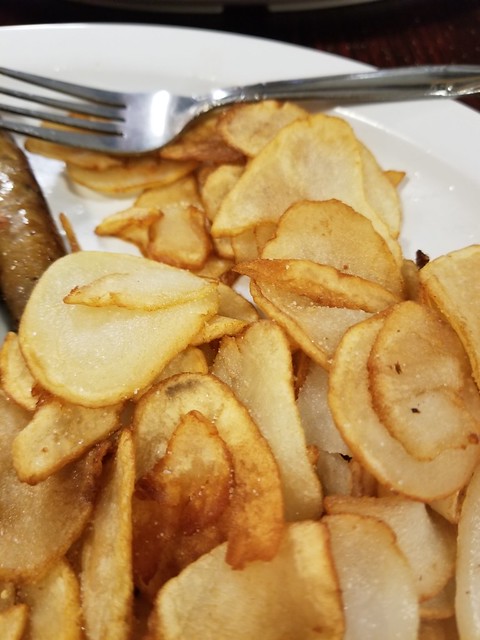 Where the place really shined was with their potatoes. This fantastic side dish was like a gossamer cross between potato chips and perfectly cooked hash browns. Neither of us left an ort of these delicacies on our plates. I plan on hitting this place up one day during my holiday break.

Final Score: 4 Pats of Butter. I would give it 3 but those potatoes and the fact they were Dr. Jen’s fav earns them an extra pat.

Thanks for sticking with me! I got kind of backed up with this one. I’m hoping that as I do these in the future, each review will be a short little post. I promise my next 2 posts won’t be pancake related.