On part/day 2 of my journey it rained for 24 hours. This wasn’t just a light mist or gentle shower. There were gale force winds that turned our umbrellas inside out, the streets flooded causing detours on our walks through Salem (yes we still went out), and our faces and jeans were soaked by the horizontal onslaught of rain drops. To top it off, Dr. Jen was sick with a stomach bug causing her to eventually upchuck (she might hate that I wrote that). She was a trooper about it and I still had fun (am I an asshole for enjoying myself while she suffered?)!

My day started out brilliantly! Just down the street from Ron’s house is the very first Dunkin Donuts! I got to see and eat where the all that doughy magic began. I’m not really a huge donut guy but how could I pass this up? Being it was Halloween I ordered up a Boston Scream, my absolute favorite. That little guy next to my donut is Murray, a new mascot I’ve acquired. Much like Stephen, I hope to travel with him more and often.

From here it was often to Salem for Indian food, playing with a friend’s dog, and getting soggy. Because of the weather and our lack of activities, I only have two pictures to share. It’s unfortunate because I did see a few of the filming locations from Hocus Pocus. For the first picture, please enjoy Murray trying to scare the narrator of a skit depicting a witch trial. 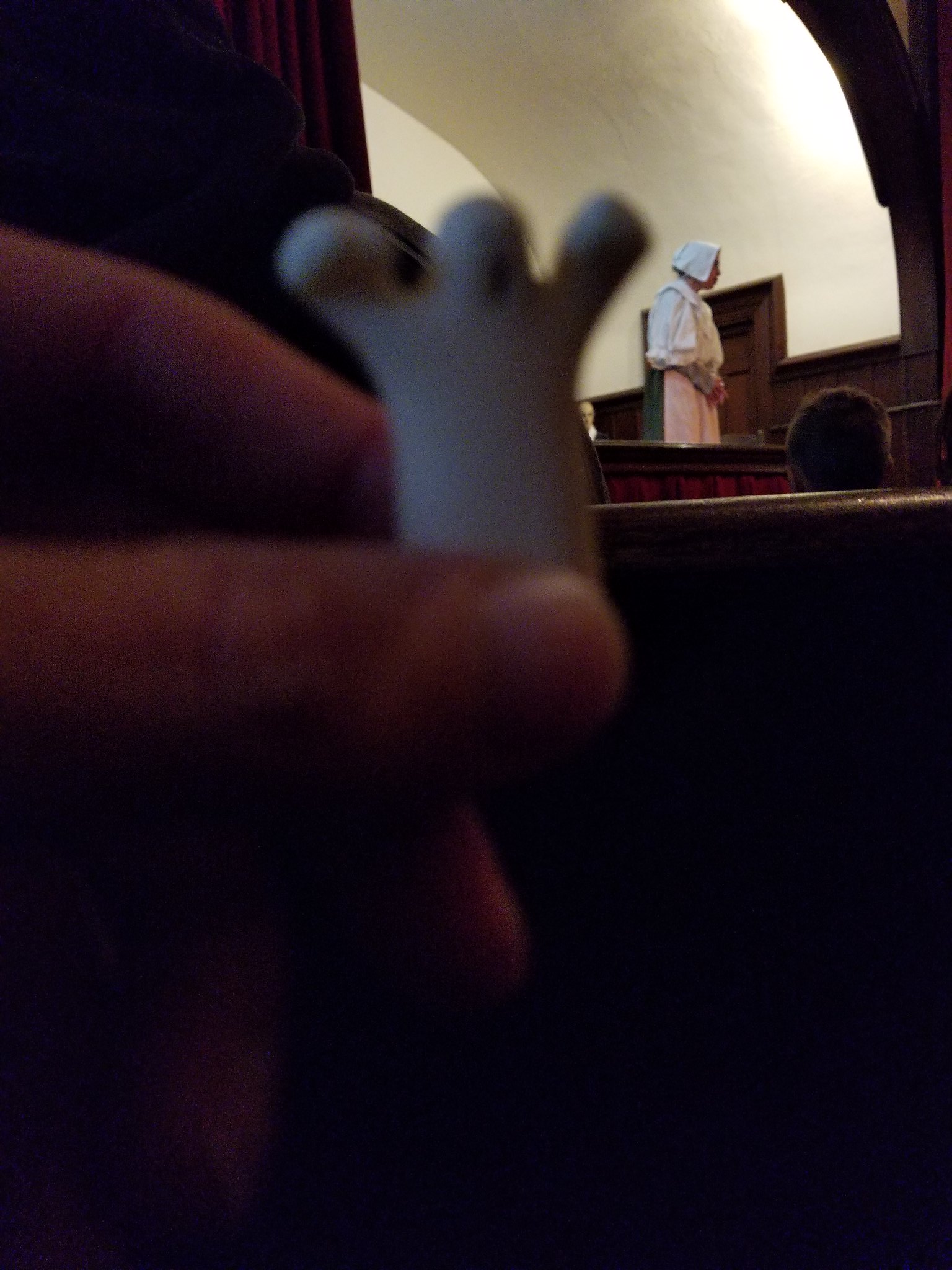 We also hit Caramel French Patisserie so our friends could pick up the place’s famous macaroons. The store was kind of sparse in a classy, art gallery sort of way. The foods weren’t all up in your face but rather presented in a sexy, “you want me but might not be good enough to have me” kind of way. I bought these little fat-bombs presented in my second picture. The lemon tart was for Dr. Jen when she was better. I didn’t try it so I can’t speak to it’s taste. The one on the left was a walnut tart. It was good but not great.  The caramel pear one was so good though. It had crisp, juicy pears inside a cheese-cake outside. Fantastic. 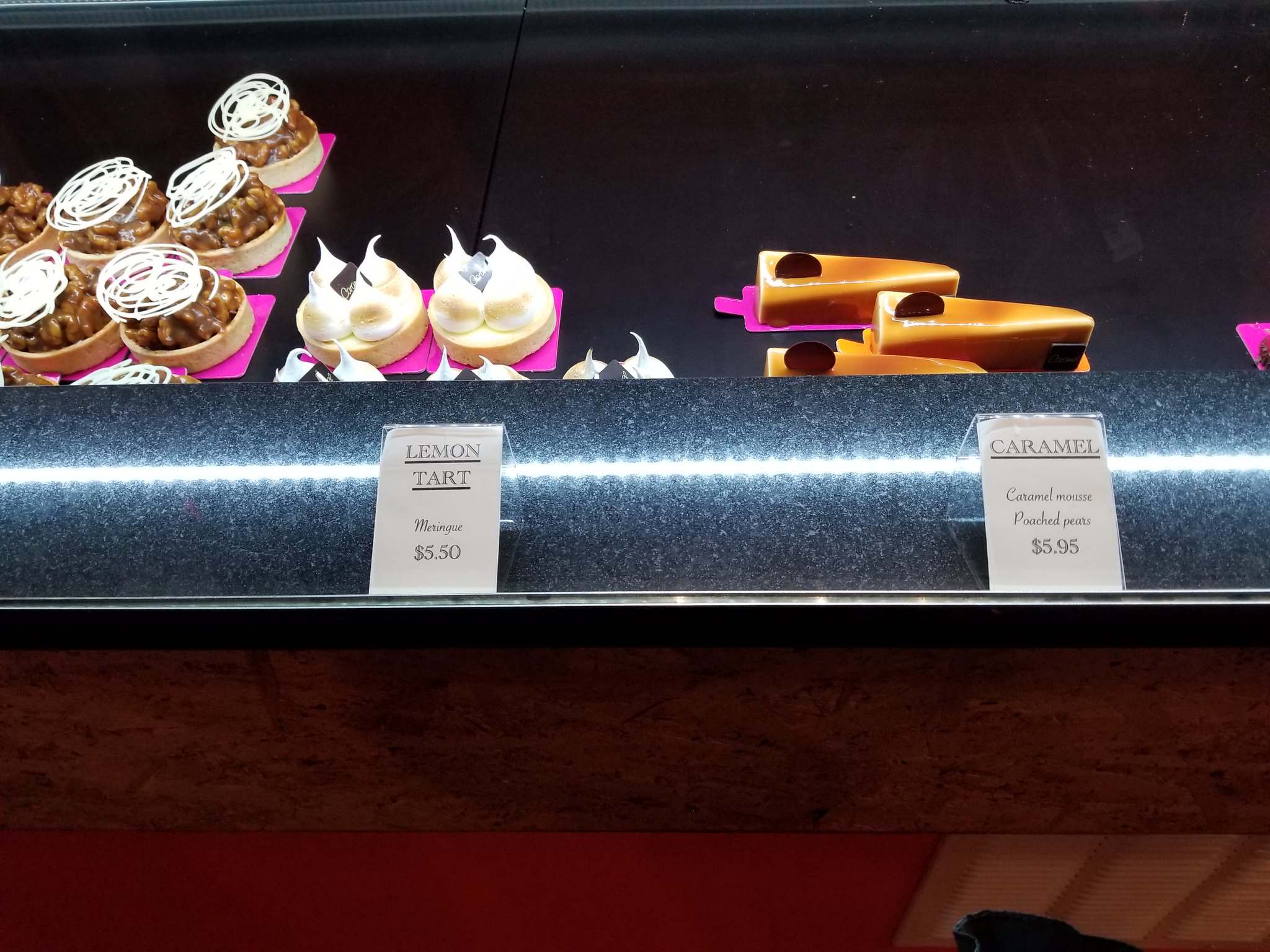 Also I got witchy pennies. 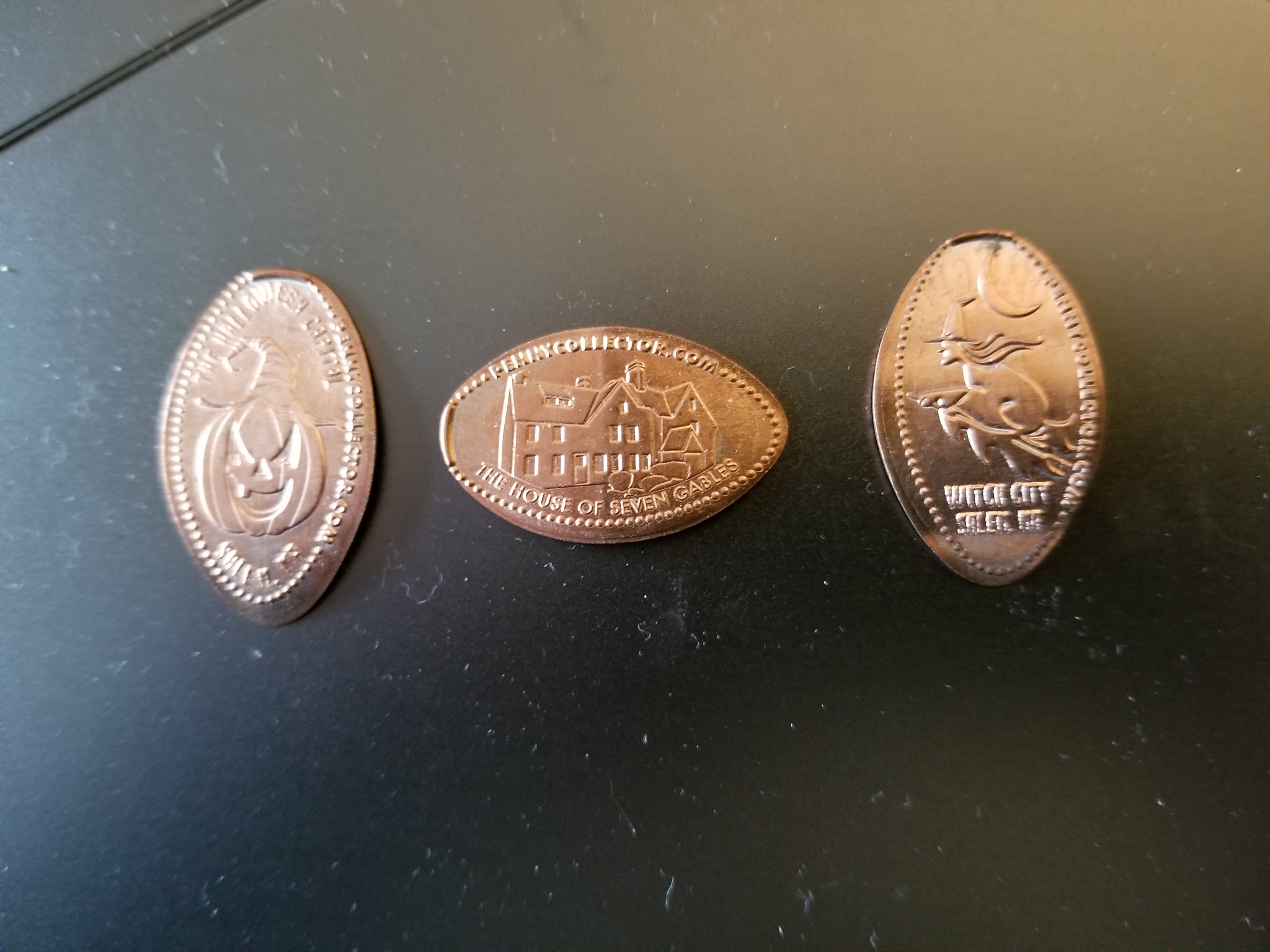 While our second day was a wash (ha!), our third and final day was pretty good. Dr. J went back and forth between feeling okay and deathly (she carried her sad plague for a week but did survive). Again she was a good sport and we were able to see some fun things on the way home. The first place was the town of Mystic, CT where I had it on good authorities there were some penny smashing machines. For lunch we stopped at Mystic Pizza where the aptly named Julia Roberts movie Mystic Pizza was filmed. It was a really cute town and restaurant but I think my pizza was overcooked because it tasted a lot like a Little Caesar pizza. I only recommend going there for the pennies. 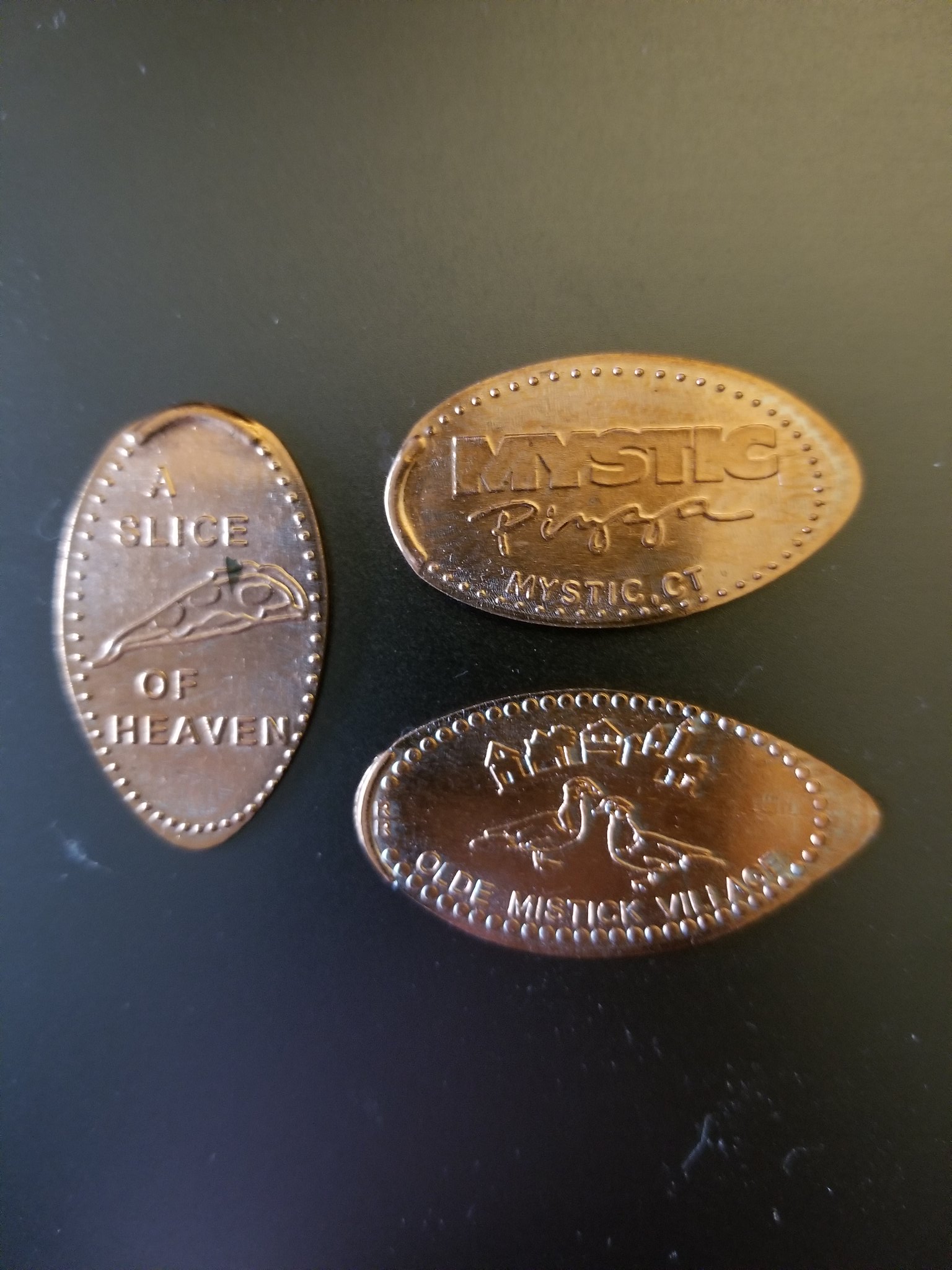 Before I continue on to the last stop, let me share the pennies I acquired at the Pez Visitor’s Center I forgot to slide into my last post. 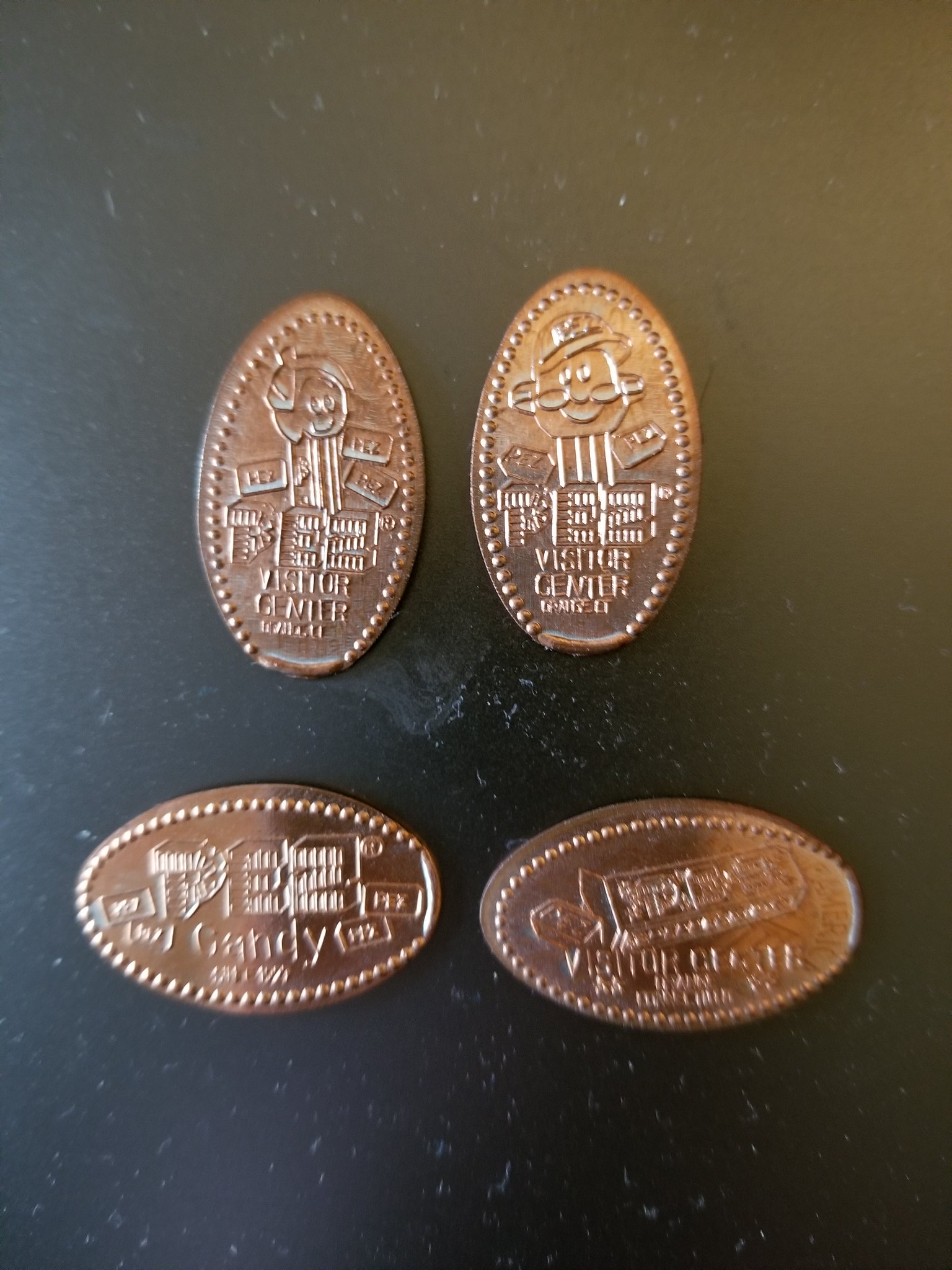 Now that we have that out of our way, let me share with you the highlights of visiting Stew Leonard’s, the Worlds Largest Dairy Store! 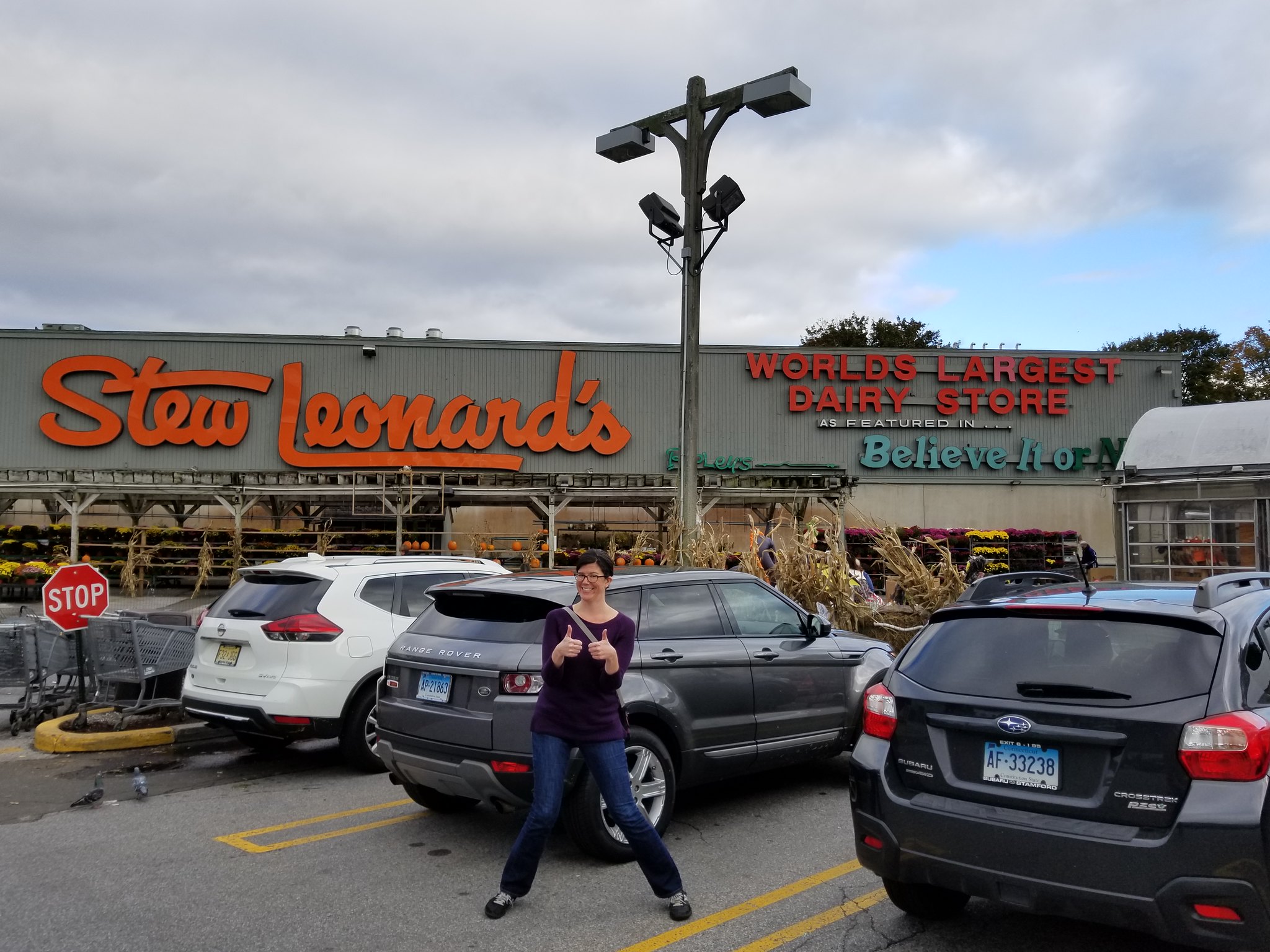 The place is amazing! I think most people go for the meats, cheeses, produce, and various other grocery store items. For me? It’s all about the animatronics and soft-serve ice cream. Seriously though, this was the greatest soft-serve I’ve ever had. It was as creamy and smooth as soft-serve should be but it was also tremendously dense like traditional ice cream. I don’t know how to better describe it than to say it had the best qualities of hard and soft mixed up into an ambrosial decadence. Some 50¢ words for you. I ate the ice cream too quickly and forgot to take a picture so you get a photo of me biting a giant apple instead. Enjoy. 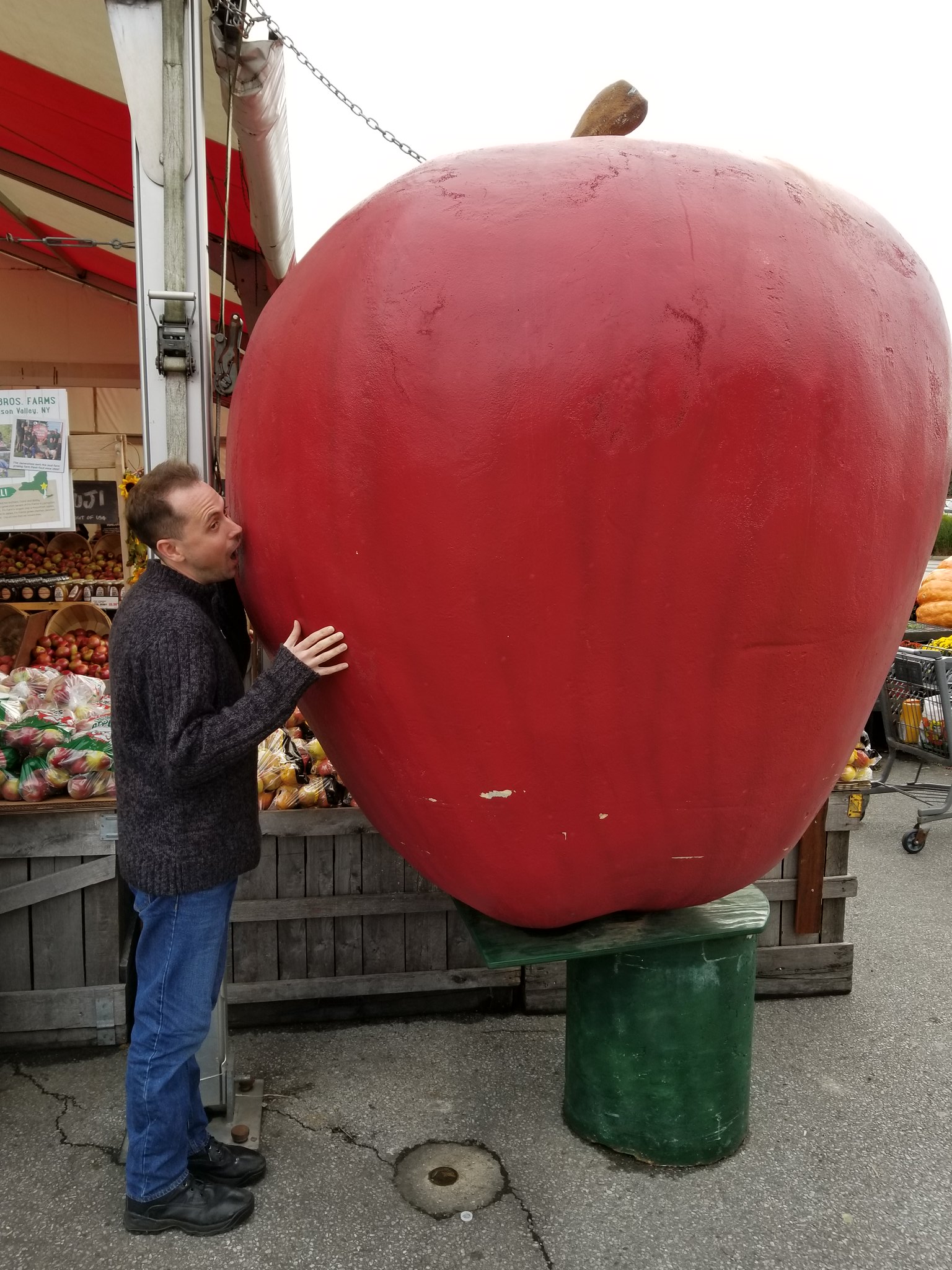 Didn’t I mention animatronics? My favorite type of tronics? Yes I did! They are scattered all through the store. Some you have to push a button to activate while others work off of a schedule. I felt like I was the only idiot who stopped what I was doing to watch each. I was definitely the only idiot who was recording them to put on a WordPress blog…at least that I saw. Enjoy these videos which include the sexy banana I referenced in my last post. Sorry the sound sucks. I recorded it on my phone in a grocery store, what do you want from me? You bring some A+ quality keyboard playing lettuce videos to the table if your standards are so high! I hate when we fight like this.

I’d say she has some real sex-a-peel. And I’m out…

2 thoughts on “Time to make the donuts.”