The weekend before Halloween I went on a bucket list adventure that turned into a lame but funny disaster. I’ve long thought Salem, Massachusetts would be a fantastic place to celebrate one of my favorite holidays. It might be but I’ll have to go back to find out. I did see some wannabe The Craft era Fairuza Balks, but everyone was too soaked and covered to really show off any costumes. This trip is gonna be written as a two parter to keep the posts of a manageable size. My senior year English teacher told us that our writings should be the length of a pretty girl’s skirt. Long enough to cover the subject, but short enough to keep your interest. That shit would never fly in school today.  Feel free to not read and just look at the fun pictures.

My drive up to Salem was long but had some great stops along the way. I have to get in the habit of stopping and visiting serendipitous sights I find on the road. Too often I regret seeing a giant frog mailbox and not photographing it. I saw several great roadside attractions but only stopped for a photo op at a Children of the Corn inspired pagan god (I assume that’s what it is). It’s a great find but there were so many other great opportunities I missed for no other reason then I didn’t want to make a U-turn. Road trips are not the time to be lazy.

To continue with the spook-tastic theme for the weekend, our next stop was Sleepy Hollow, NY, the land terrorized by the infamous Headless Horseman! Originally North Tarrytown, the inhabitants have embraced Washington Irving’s tale and changed the name to reflect the legend. In fact Irving is buried in what is now Sleepy Hollow Cemetery. I love the pumpkins, it’s a nice touch. 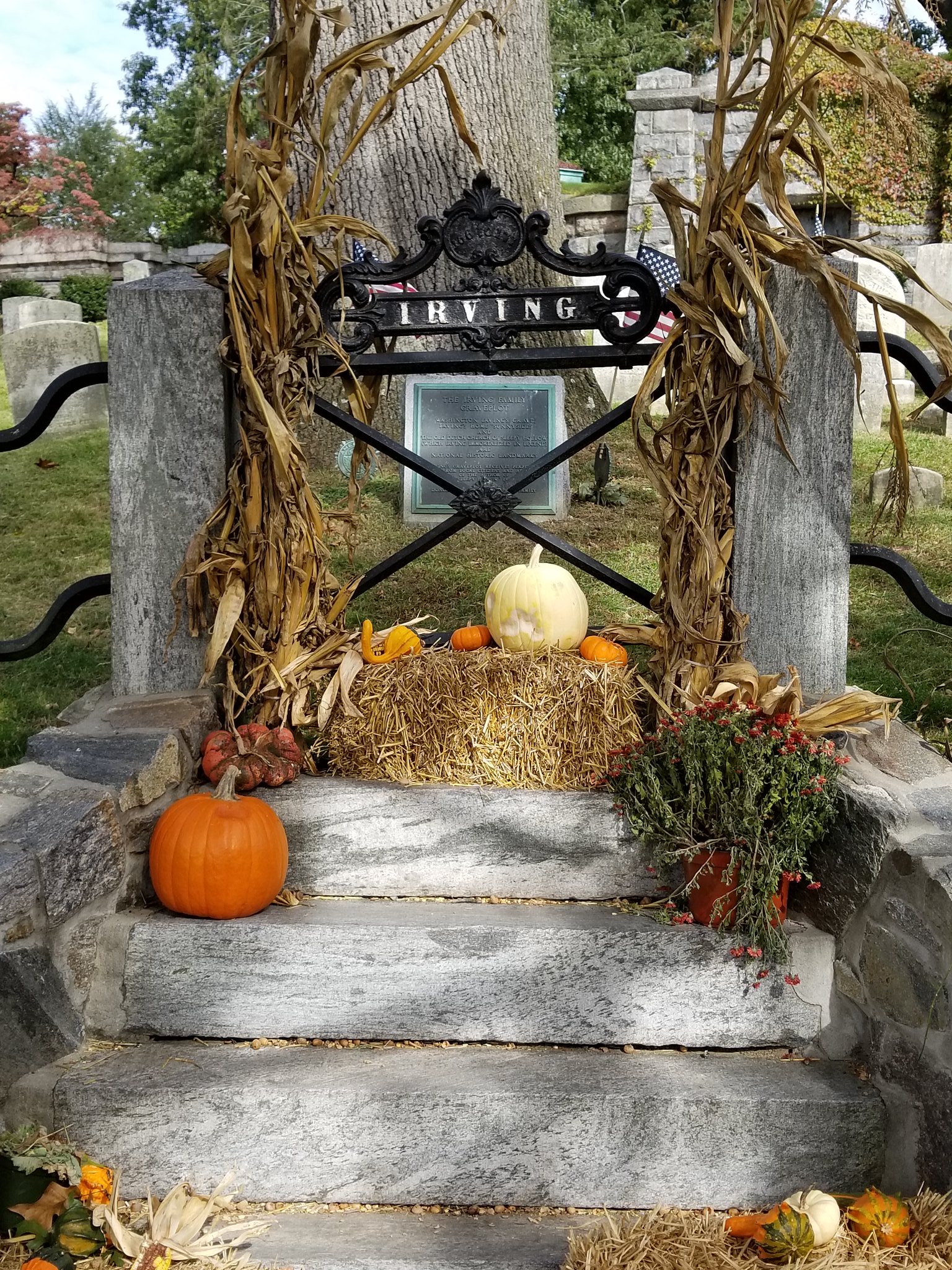 I also found some unique graves I wanted to share as I’m wont to do. This cemetery is home to a few big names. Many of the Rockafellers have been laid to rest in their own mansion on a hill. At a modest (for his caliber) grave was Andrew Carnegie. I always thought he was buried in Pittsburgh. My mom was never clear about why I was named Andrew, so for this picture I’ll say he’s my namesake. Why not? 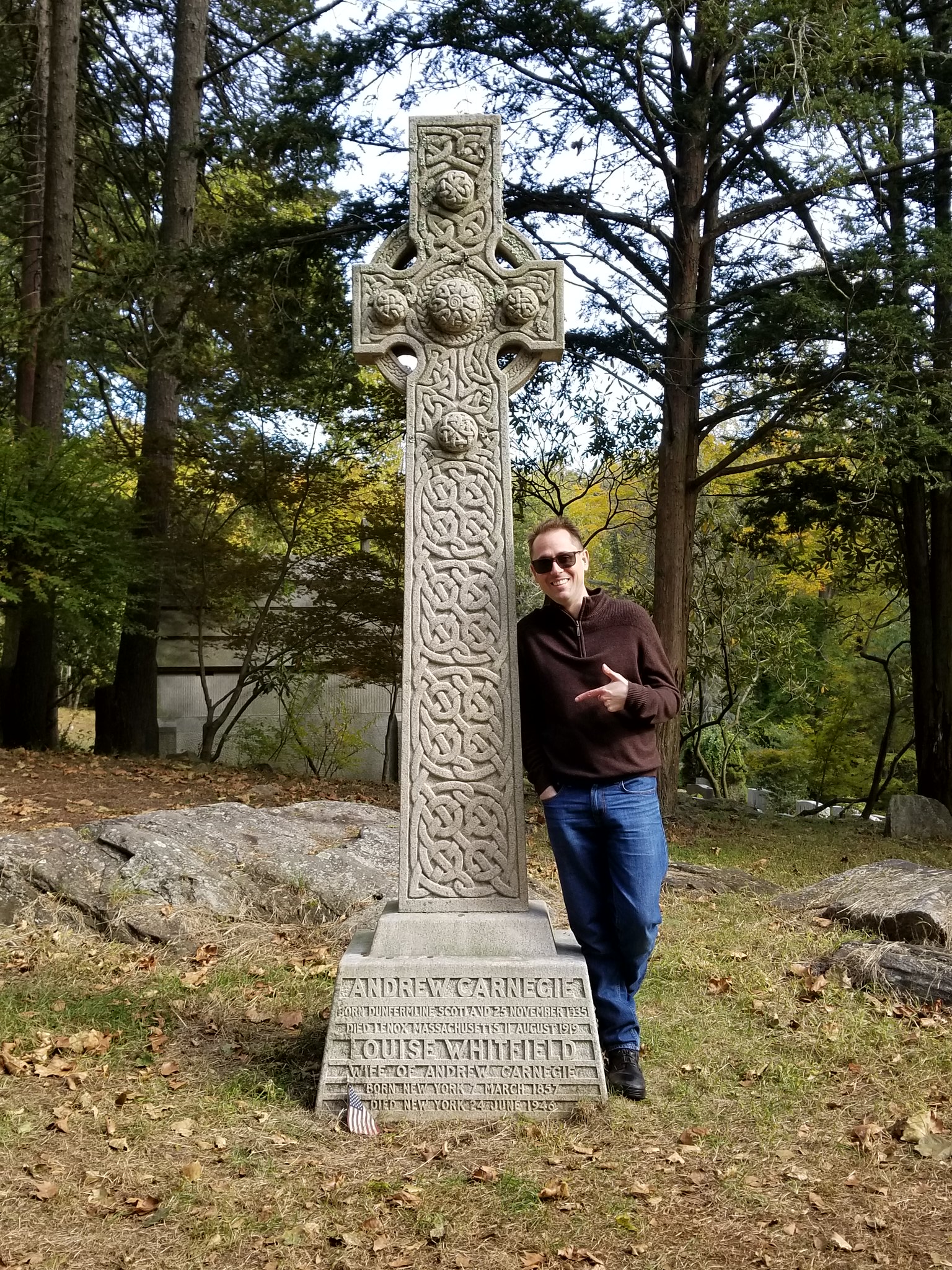 Here are some other graves that stood out or just tickled my fancy. I mean, damn man, that’s some last name (see what I did?)! 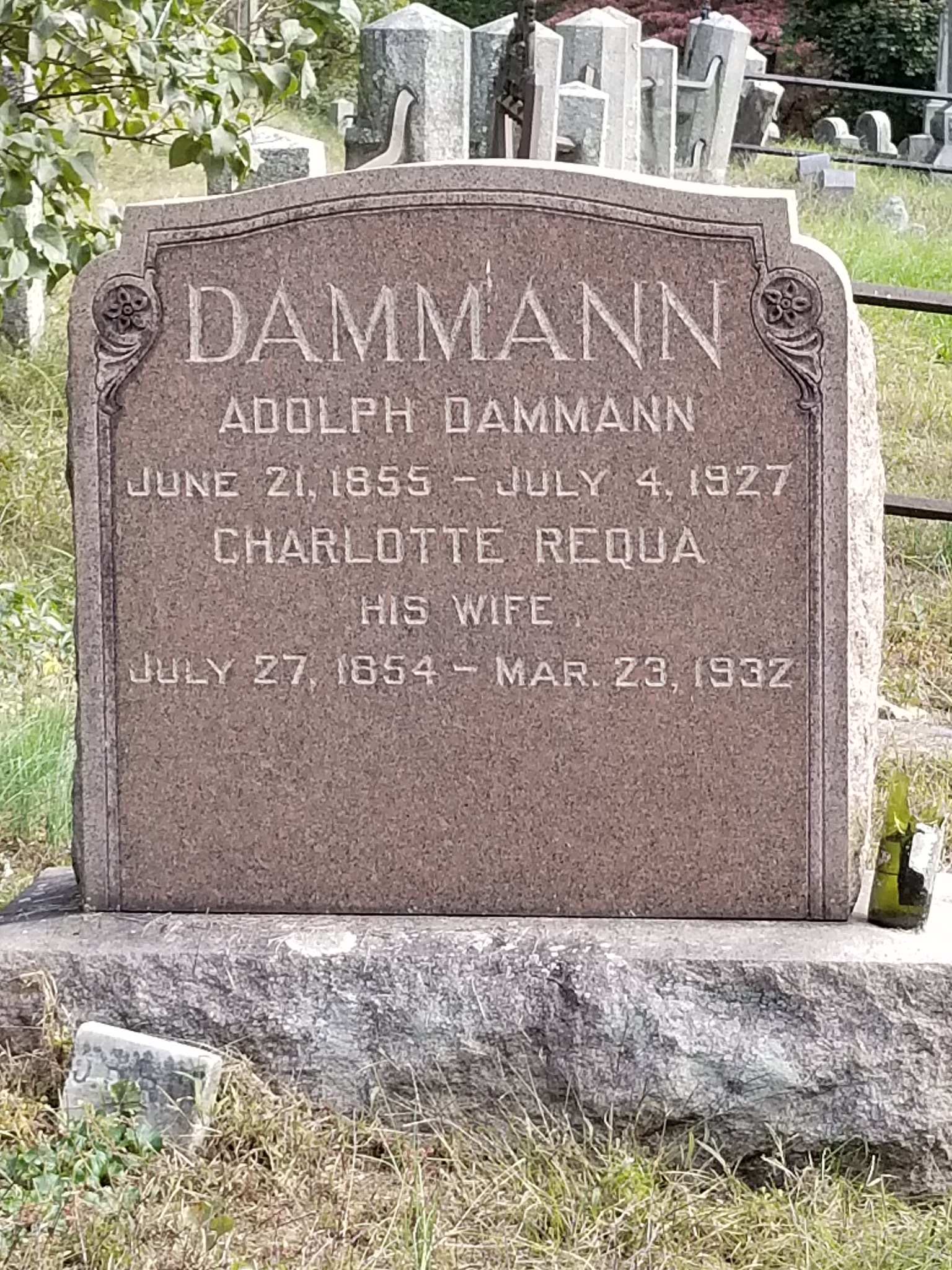 I love the period at the end of the name on this one. It just seems more sure of itself and certainly emphasizes that this family is done. 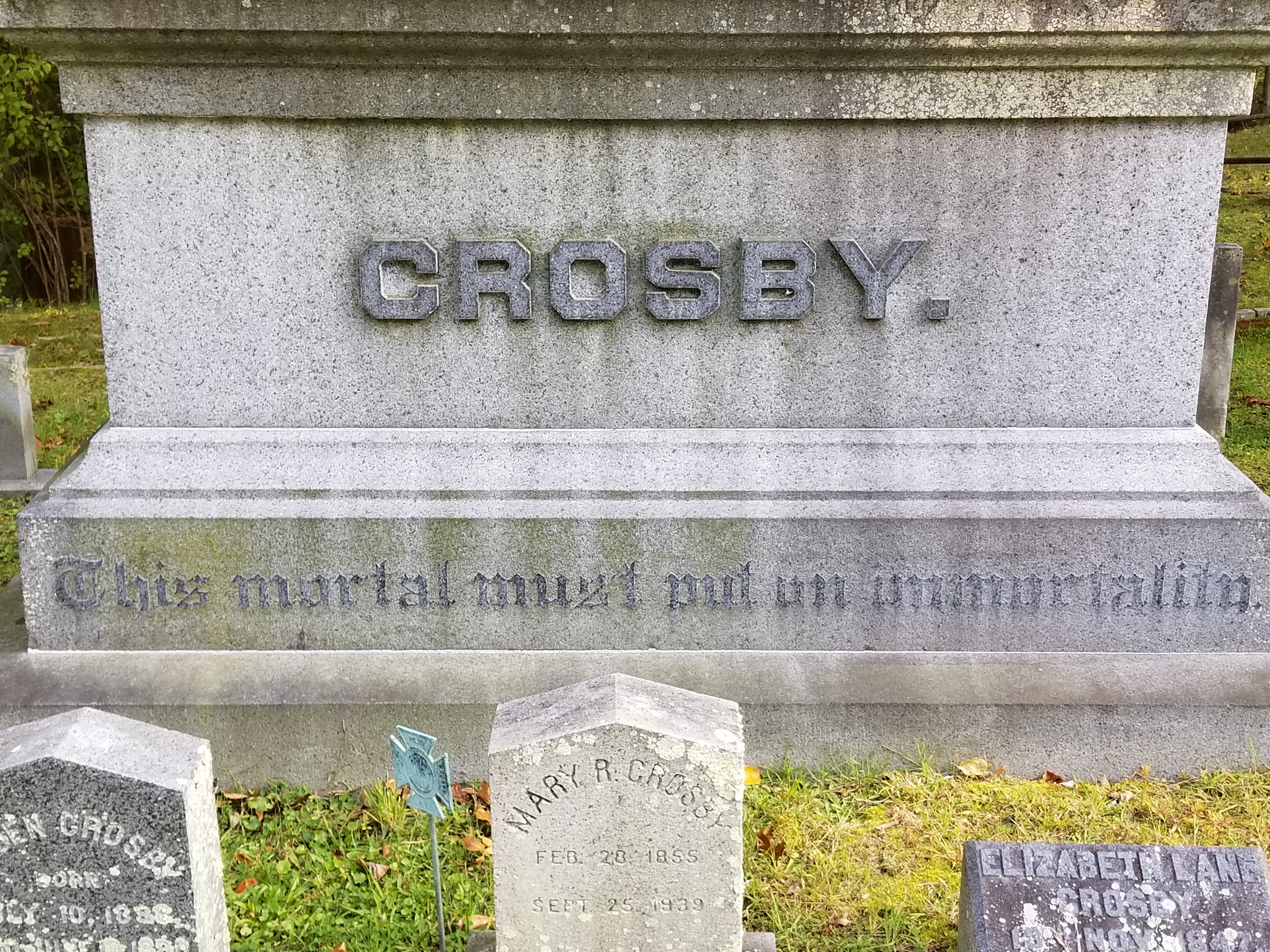 This next one has a cool, film noir detective name, Spencer Blaine, but mostly I just liked the font. It almost looks like it belongs on a circus tent. All we need to know about this gentleman is that he was obviously awesome. 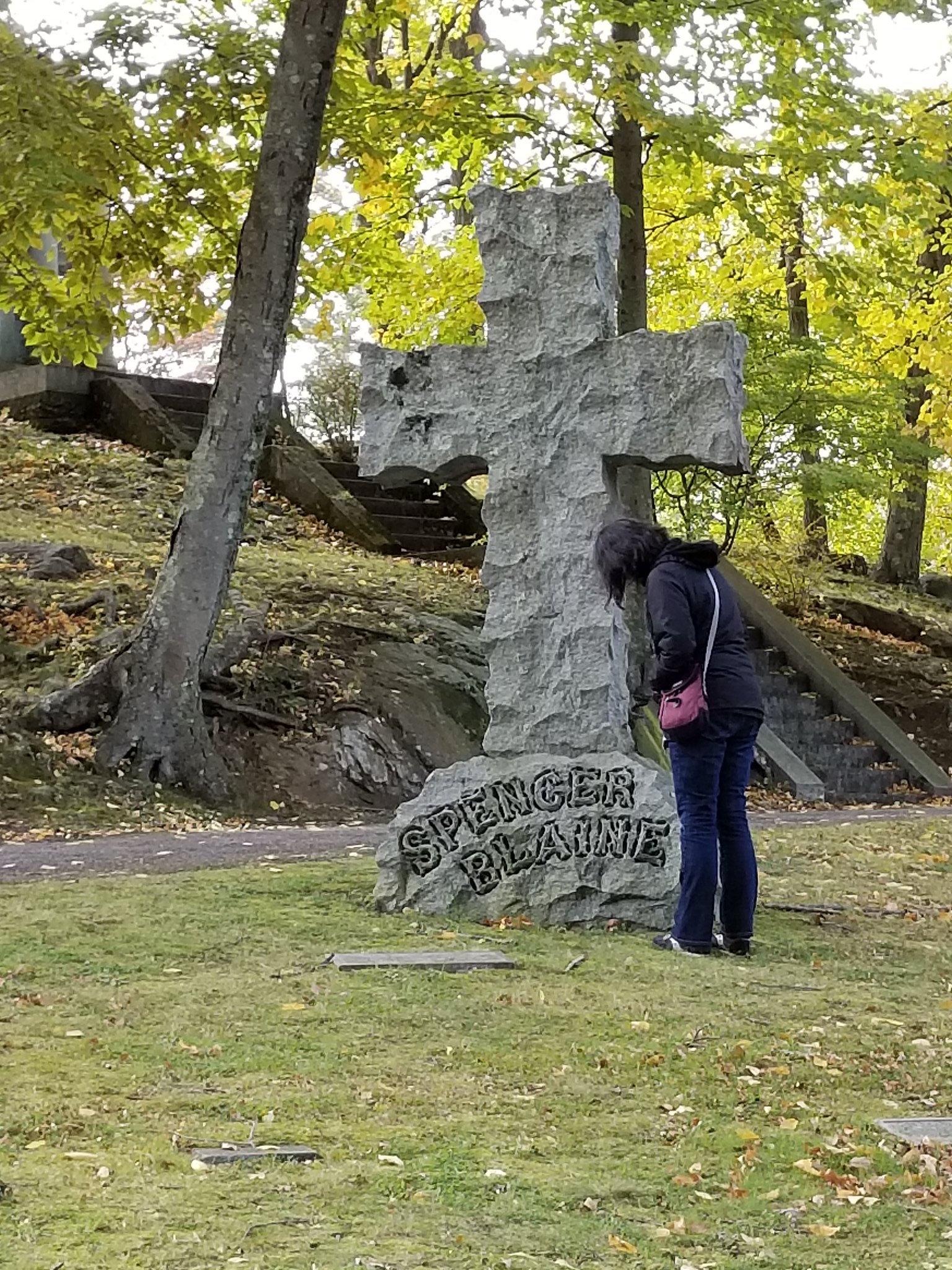 I want to share two more grave photos. These are photos of graves, not photos that should cause alarm or distress. The first is this fantastic epitaph. “George, Fell Asleep.” Sucks to be George when he wakes up. 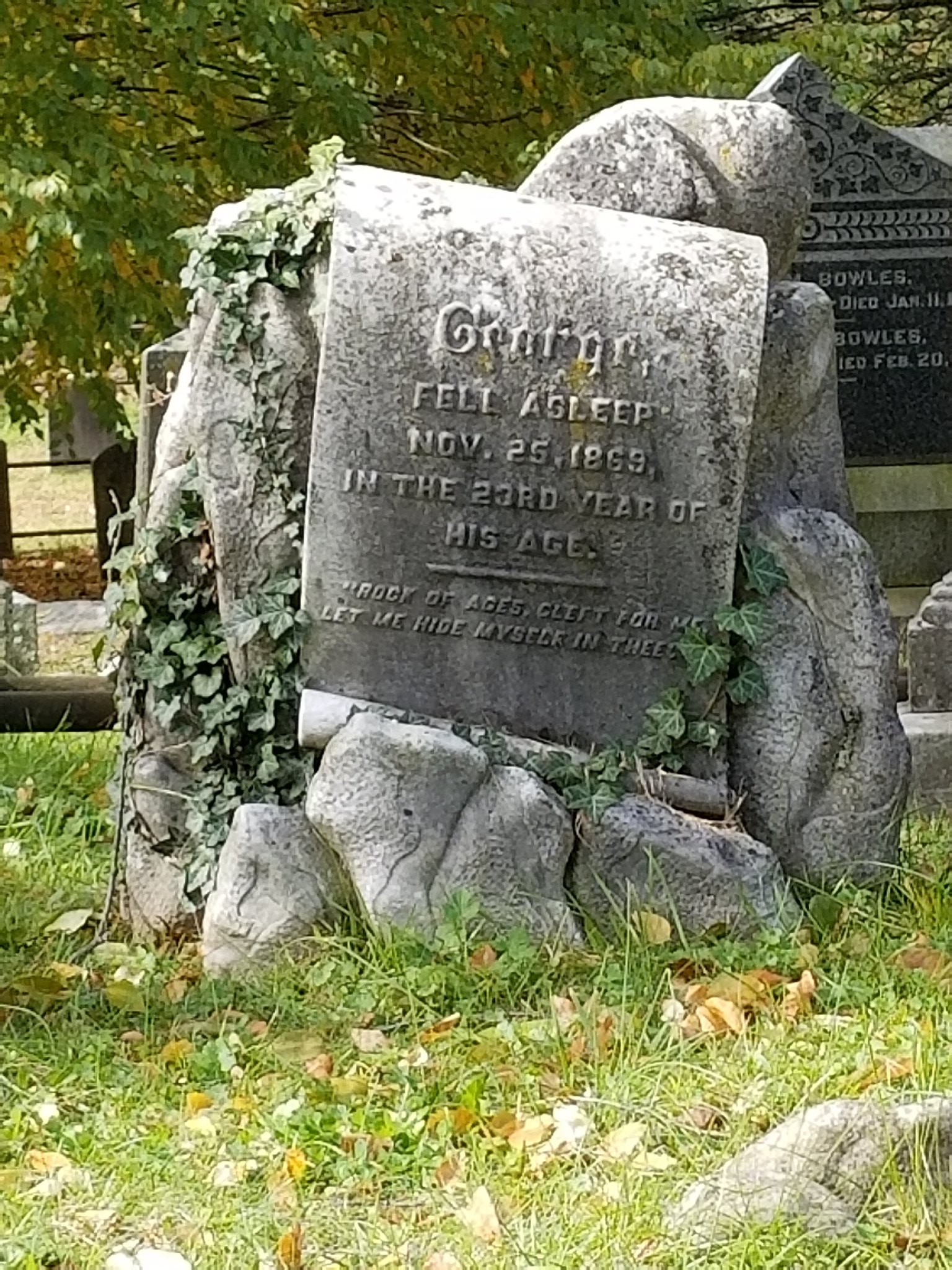 The second is this epic mausoleum. There were so many large crypts just built into the hills. I wish you could go inside, it’s such a waste you can’t. I was able to peep into a few and in one there were at least half a dozen marble busts! These sculptures are just going to waste in a dusty, old crypt. Hopefully there’s a crypt keeper or ghoul in there somewhere who can appreciate them. I wonder if they’re gods, the people buried there, or just works of art. It’s killing me that I’ll never know. 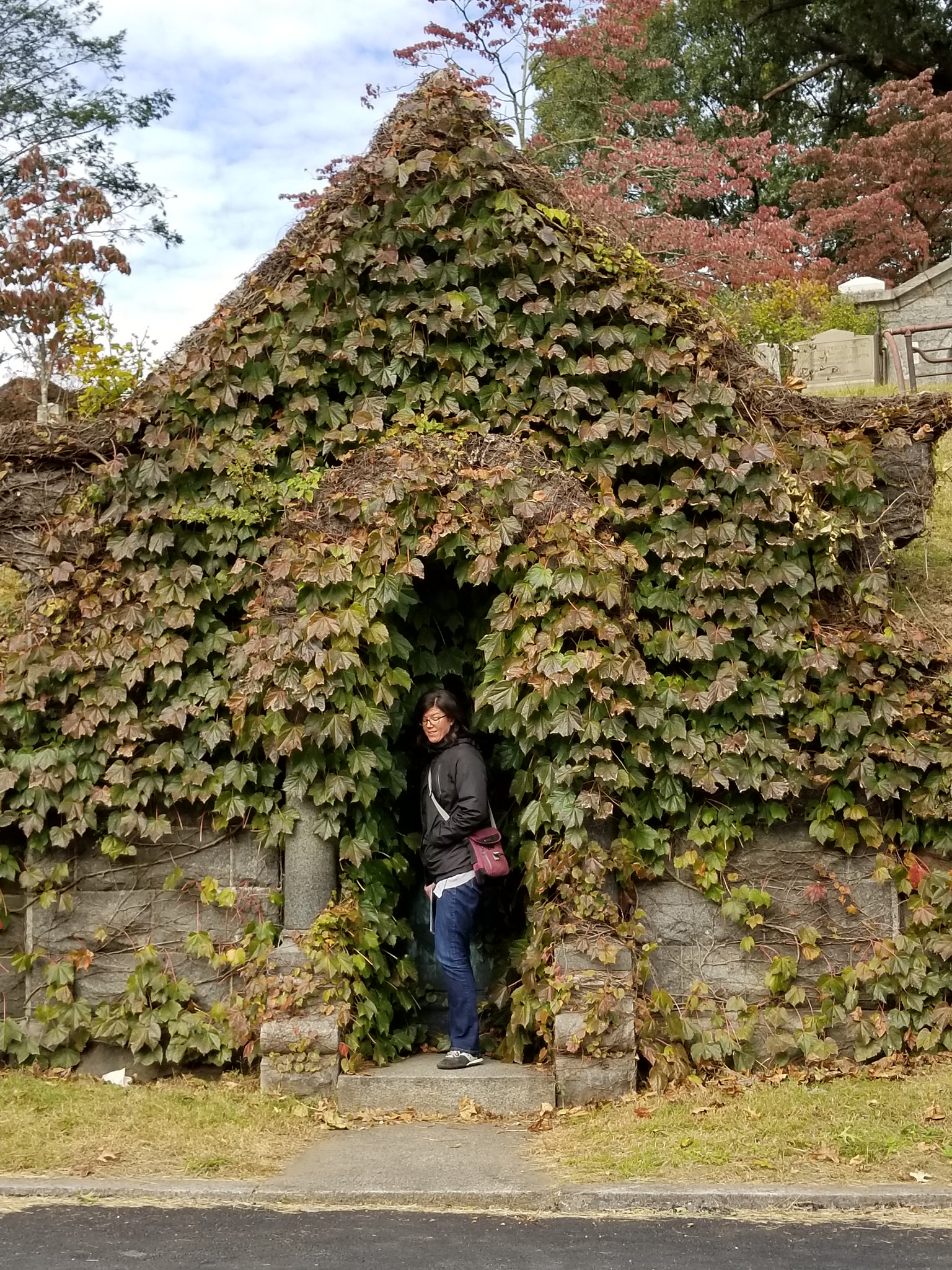 We did find the actual bridge Washington wrote about. This is what you need to cross to escape the headless horseman! Unfortunately for Dr. Jen, he threw a pumpkin head at her like he did poor Ichabod. She escaped…but just barely.

Our next stop was the Barnum Institute of Science and History, a museum dedicated to P.T. Barnum. Traffic killed us getting there. We rushed and made it with only half an hour to spare. Little did we know, we wouldn’t even need that. Several years ago a tornado swooshed through the area, destroyed and flooded most of the real museum. We got to see a small room with very few artifacts and an old woman who couldn’t stop telling us how inaccurate Hugh Jackman’s movie was.

Inside we found a lot of information, beds, clothes, and a carriage for/about General Tom Thumb; lilliputian in stature but grand in spirit. There were a few side show oddities as you would assume for a Barnum Museum. I just wish the rest of the collection was out for view.

Also there were fun house mirrors.

Our last stop before heading to Ron’s, our wonderful host for the first night, was the Pez Visitor’s Museum! I would say it was 1/4 factory, 1/4 museum, 1/2 gift shop, and 100% delicious fun! 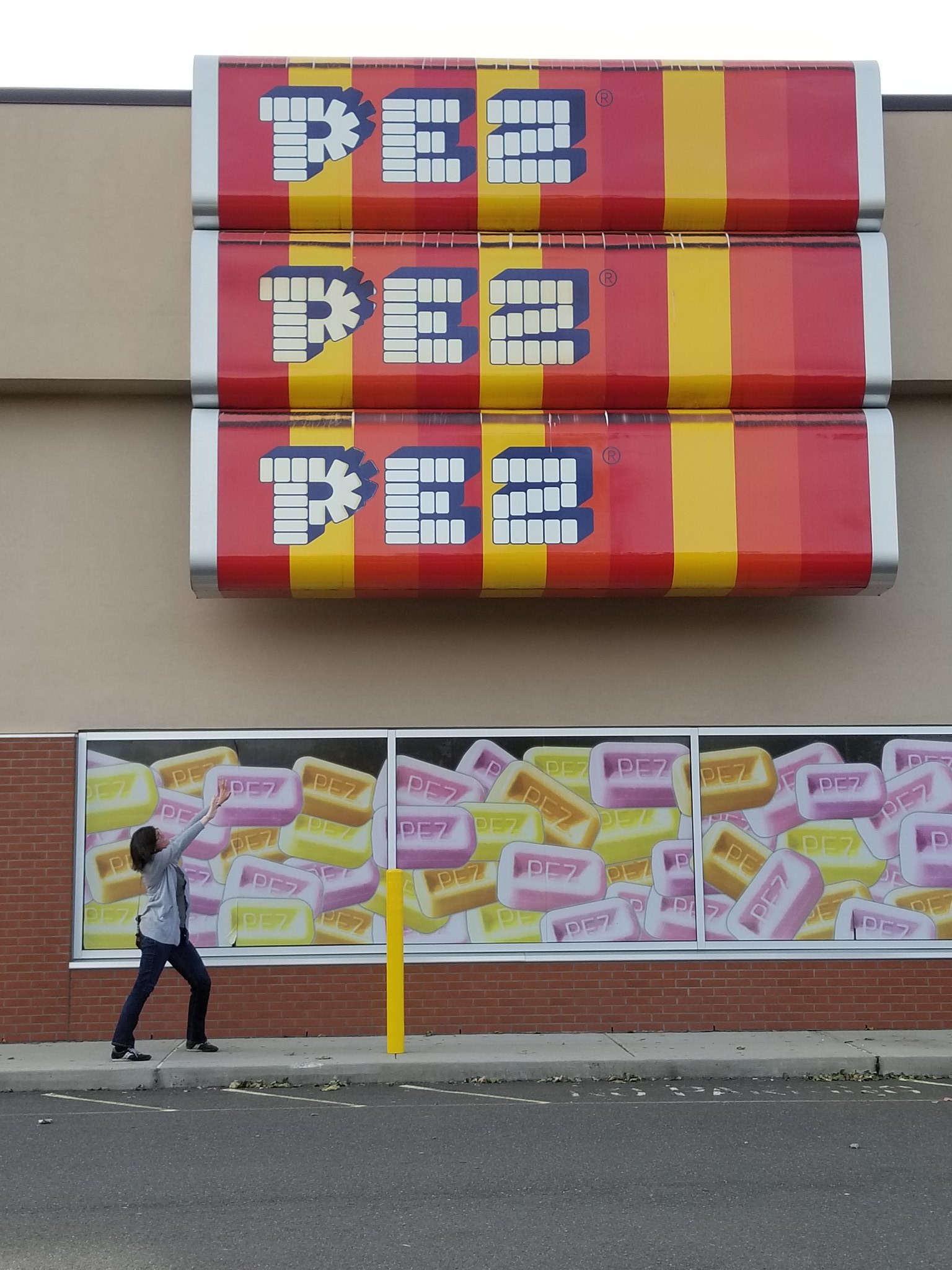 There was a fun scavenger hunt where we had to look all over the museum for little glowing skull Pez dispensers. Each one had letters that we had to use to decode a phrase and win a prize. I won this little gem.

Beyond this win, I had to buy a few. Being Halloween, I needed a few scary ones for my office, so I got the ghost, mummy, and slime blob. And being as I’m a fanatic, I had to get Candice and Dr. Doofenshmirtz to go with my Phineas and Ferb.

Lastly Dr. Jen and I learned how to be Pez dispensers ourselves!

Stay tuned for the exciting conclusion of this trip in the next blog post! We will laugh, we will cry, and we will see a sexy, singing banana. For now enjoy this video of a slow moving, two story Pez.

4 thoughts on “You’re not famous until you’re a Pez dispenser. – CF”