December 28th was a miserably cold day, so it was perfect for a small road trip to Baltimore! I didn’t get to all the places I wanted to see but what I did see was great. I love Baltimore as it’s given us the American Visionary Art Museum, John Waters, and the first sugar refinery in the US. One of these days I’m going to do a tour of John Waters related sites. One of these days.

For now settle yourself with my short and brisk drive this past holiday season. This trip was originally planned for October because of it’s spooky themes but life got the better of me and I never made it. Things happen. Also on this trip I was scheduled to see a hospital and another grave but places were closed, the weather was fierce, and I live close enough to go down again soon. I decided the three places I visited were good enough.

First was monster mini-golf! Don’t let the outside fool you or the fact it’s tucked behind a slew of stores inside a lame strip mall, the place is amazing. It’s difficult to find unless you’re specifically looking for it, and even when you first see it, it doesn’t stand out. Much like any good adult book store, the place has no windows and even looking through the windows of the door you can’t see anything. But once inside you’re blasted by a fantastic world where little colored balls determine your social status! 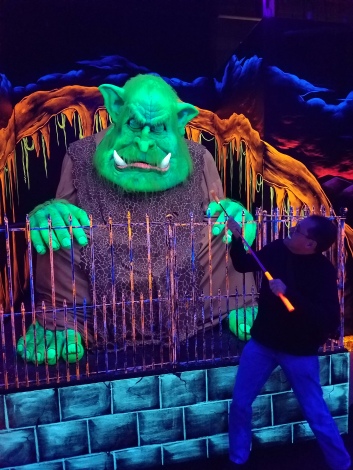 Spooky themed places (especially with black lights) are my wheelhouse. I’ve been itching to get here since I learned of it in early 2017 and it was totally not a disappointment. The workers ensure you have a great time and they have their own “radio station” pumping music through the place (W.I.R.D. – pronounced weird). You can rent the entire place out for a party which I would totally do if my friends weren’t lame and hard to organize. Their loss. 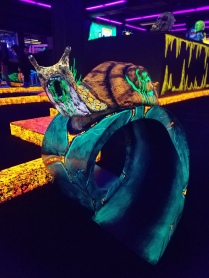 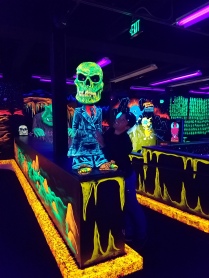 The decor was amazing. Some of the critters, like that big guy in the top left corner and the ogre I’m slaying further up the page, talked and moved. That purple guy actually rocked his hips forward and back making the purple tentacle at his front whip up and down. I’m not sure if this was intentional but it should not have been in a kids’ mini-golf course. The house and wishing well had tunnels you could shoot the ball through with moving parts to block you. I’ve been to mini-golf courses with more creative holes but this is at the tops when it comes to decor and interaction. 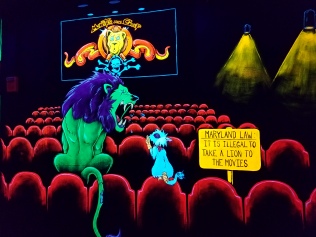 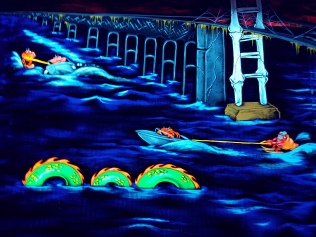 The course isn’t just fun, it’s also educational! Scattered throughout are special state laws and cartoons of (in)famous Baltimoreans. The little water scene highlights one of their bridges and their obsession with crabs. Living this close to the ocean, it’s a sin I don’t like seafood, but I can appreciate crab water skiing art! As a fan of John Waters, I had to be photographed by the painting of him (I swear the club placement was unintentional). I bet if I tracked Mr. Waters down and asked him to play a round with me he would. I need to look into this.

One hole had a wheel of obstacles to spin. Erik’s made him do his first putt behind his back. Mine allowed Erik to stand anywhere on the hole to block my ball.

This was the second best hole on the course. The only reason why is because I got an MFing hole-in-one! I am super awesome, by the way.

The best hole is obviously the last. You have to roll your ball like you’re bowling instead of using your club. I wish I could say we made that clown choke on our balls but that would be a lie. We didn’t come close. But I won the game, so Erik can choke on that!

My next stop was The Horse You Came in On Saloon, which claims to be the last place Edgar Allen Poe drank before he died. I’ve been to so many places supposedly haunted by Poe that I take this with a grain of salt. If his ghost is hanging around though, I do believe they nailed how it would look. It would be his head floating in a body like Krang holding a double barrel shotgun and wearing an enormous cowboy hat. 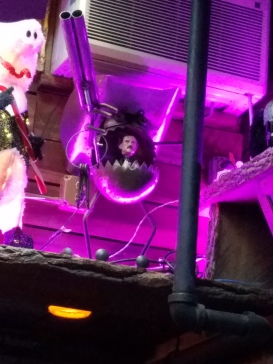 So what did we eat? 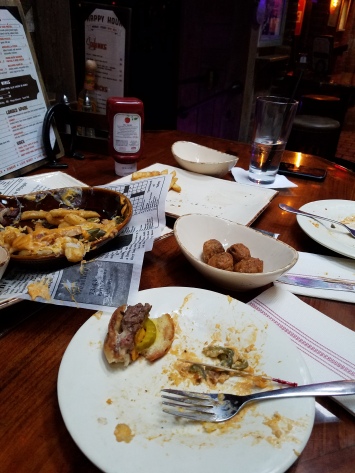 We did a pretty good job debasing ourselves with fried food. The picture above was taken before we finished the corn bites, slider bit, and side of fries. We couldn’t kill the cowboy spuds. We just couldn’t. The weird stuff  = the corn bites tasted highly of Indian spices, something I know a bit about, and the cowboy spuds had a strong cinnamon taste. The best thing =  live music all day, every day. We walked in at noon on a Thursday and there was a duo rocking out like it was Friday night. Awesome.

A look at Google maps showed our next stop was .8 miles away. On a typical work day, I walk that before 6:30am. We needed to walk off all that greasy food and got psyched up to go. The second we stepped outside and that sub-zero wind slammed into our chests we changed our minds. There was no discussion, we both walked straight to the car. Defeated we drove to a graveyard that had just closed. Now dejected we drove to a graveyard that would accept us!

Freezing cold we found a parking space that seemed twelve parsecs away from the cemetery. We ducked between buildings while the water in our eyes froze, determined to see at least one famous grave. Finally amidst all the graves of semi-famous, rich, white folk, we found Mr. Poe. There is a lot of history to the grave where he may or may not be buried. Regardless we didn’t dally long, it was just too dang cold.

To appropriately end this post, enjoy Poe’s The Raven as done by The Simpsons.

Tales from the mouth of a wolf