Guess what I got to see today. Originally I only intended to go to Rock City because it’s right on the TN/GA border and by adding Georgia I officially hit 50% of the states on one trip. Once I read Mr. Hollis’ book “See Rock City” however, it became an important stop. His book detailing the attraction and life of its creator kept my attention from page one. I even forced a co-worker (sorry Darlene) into reading passages that I thought were especially great.

I wanted to make a stop prior to going to Rock City. I contacted the Goggans family June 30th about getting a tour of their folk art. They couldn’t have been nicer. Mr. Goggans and his son-in-law both contacted me and told me they would be happy for me to visit. They gave me a phone number and asked me to contact them a few days before I arrive. Unfortunately I wasn’t able to connect with them so I had to skip the tour.

On a side note, it was said that there might be some yard sale stuff sitting around the junk art because it was just after the “World’s Longest Yard Sale.” The WLYS has been on my bucket list for years! I hope when I finally drive the entire sale down Hwy-127 I can finally get my view of the Junkasaurus Rex.

I was too excited to see Lookout Mountain and Rock City to be disappointed! I’ve not had great luck with tourism/travel books. I’ve found the majority to be dry at best. The two “Ghosts of Gettysburg” books I have were the exception until I read “See Rock City” by Mr. Tim Hollis. The book details the history of Rock City and the man who had a major impact on US tourism and tourist traps. 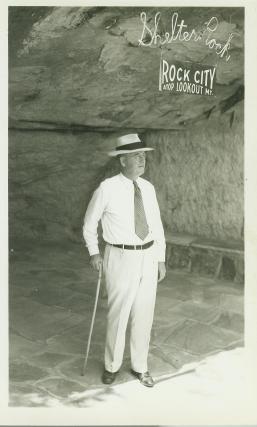 Garnet Carter was the original owner of Rock City. For me, Mr. Hollis’ book paints him like a cross between Walt Disney and PT Barnum. The man was a genius and surrounded himself with talented people. I’m not going to detail his life, I’m going to suggest you read the book. I will tell you that Carter invented mini-golf, which is awesome. He and one of his staff also began the trend of painting barn roofs with advertising slogans. For him it was always “See Rock City.” Bird feeders were made and sold to emulate these barns and further advertise the attraction. The ads for it became so prevalent along the highways that jokes and songs were made in parody. One joke was made during the moon landing when a newscaster said that off camera the astronauts saw a sign that said “See Rock City.” These signs could be seen stretching all the way to Michigan and I passed some of the remaining signs this morning.

Another major innovation he came up with was advertising in motels by offering free display stands, door mats, paintings, and soaps. Some of these techniques are still in use today. The brochure rack pictured below was in my motel lobby last night. Mr. Hollis also had one of these in his house. This display had a knob that would turn a wheel and show the mileage from each major city to Rock City. 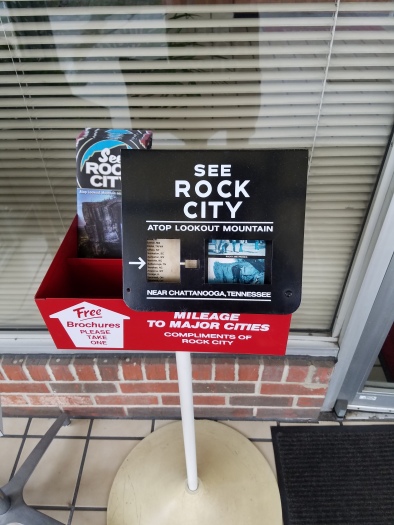 Some of the popular sights at Rock City are Lover’s Leap and an area where you can “see 7 states.” Lover’s Leap tells the story of two Native Americans from warring tribes. They couldn’t be together so they jumped. This is a common legend all over the country but the view was gorgeous.

The Enchanted Trail is a partially natural pathway that winds through the area. Occasionally you are greeted by some gnomes but mostly it’s just a beautiful garden. There are some tight squeezes and I loved watching some of the older, heavier patrons go through. 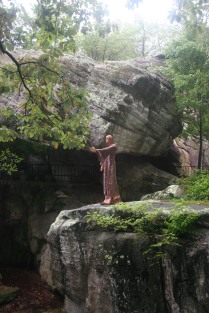 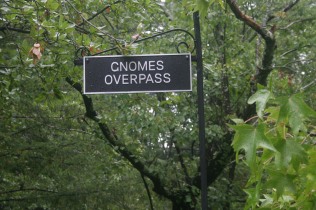 Carter was one of the pioneers of using black lights in exhibits. It seems Disney might have stolen the idea from him. Carter’s wife loved fairy tales and that has always been a major theme in his many developments. Below are pictures from the black light Fairyland Caverns. By far this was the highlight of the experience for me.

It was a crumby rainy day so I didn’t think I would need any toothbrushes. I am an idiot. I met this fantastic couple who have just retired and moved to Nashville. He was a pro tennis player and is planning on visiting Delaware this year to knock out all 50 by 50. I was a total shill and started pointing things out to them and explaining who Carter was. They seemed interested so I told them about Mr. Hollis’ book in the gift shop and that it would help them appreciate the area better. They were super nice and had I brought toothbrushes they’d be on the blog. Sadly I am an ass.

Through the park I got a penny and a few of their medals. The medals cost $3 a pop but make for a great souvenir! They’re like the size of silver dollars and have some weight to them. Each says “See Rock City” on the back because of course they would.

I really enjoyed Rock City so that might be why I was disappointed by the Lost Sea Adventure. Honestly the name makes it sound dynamic but it was lack luster. Essentially it’s an overpriced hike into a cavern. The tour is not really educational or entertaining. What differentiates LSA from other cavern tours is that the middle of the tour is suppose to be in a glass bottom boat around “America’s Largest Underground Lake.”

The water is pure, clear, and a constant 52 degrees. It is inhabited by introduced fish. There is no food in the water and the fish can’t procreate. They are simply put there and fed by the guides to amuse the customers. The boats do not have glass bottoms like mentioned on the webpage and the entire ride is roughly 15 minutes. It’s all nice but not worth the $20+ I spent. At least I got another penny.

Tomorrow’s plan was to see Lake Shawnee, a large sliding board, a haunted hiking trail, and a city called Odd. Lake Shawnee was the big draw as it’s an abandoned amusement park. All of my attempts to contact the owners for a tour failed. Since the other sights aren’t a huge draw and are close enough to my house to make day trips another time, I’ve decided to just head home. A 12 hour day wouldn’t be bad if I could explore terrifying amusement park rides but not worth it to ride a sliding board and see a “Welcome to Odd” sign.

I’ve decided to call it quits and head home after 20 days on the road. It’ll be nice to see my family, friends, and co-workers but I’m going to miss this. I think rental cars, cheap motels, and pre-Eisenhower highways are my natural habitat. I’m not looking forward to falling back into a routine and familiar streets and places. I could easily continue this for another 20 days.

There will be further posts once I decompress and go through all my notes but this will probably be the last post this week. I’m taking interstate highways tomorrow and going through areas I’m familiar with. I doubt anything will pop up that needs to be documented. I hope everyone had fun reading this. I had a blast living it! I already have 3 trip ideas in mind that I’ll start planning soon. Feel free to send cash and bitcoins to sponsor my future adventures.

“I haven’t been everywhere, but it’s on my list.” – Susan Sontag