The title quote is for Vinny, who is fairly certain I won’t make it through the night. Tonight I sleep in the infamous Clown Motel of Tonopah, NV.

Vinny, if I meet my demise tonight, I will Facebook Live it as promised.

Before I get into where I’ll be spending my last night on Earth, let me fill you in on what you’ve missed so far. Today had the roughest driving I’ve experienced in my life. The vast majority of the driving was without wireless service (though I did see 2 pay phones). Fortunately I didn’t run into any issues with my GPS because I couldn’t look anything up or use my phone as a backup.

Today is the day I started heading back east and into the south…eastbound and down, one might say.

I started the day visiting the Crashed UFO Mart in Lathrop, CA. Between this, the diner in North Dakota, and staying 2 nights in Roswell, one would think I’m an alien freak. I’m not. All of the large arcing alien conspiracies were what killed the X-Files for me. UFO themed places just make good tourist traps. This gas station was also in the perfect location for me. It was directly on my route, far enough outside of the city to get lower fuel prices, and I had just run out of Diet Coke.

After this I started my surprise drive through tourist-ville Yosemite. Looking at maps I thought I was skirting the edges of the park, turns out I was going straight through the main gates. I’m not sure if the GPS or Yosemite is at fault, but someone did me wrong. I ended up on one of the windiest roads I’ve ever been on and I almost lost my mind.

I like being outside my comfort zone. I’m afraid of heights but still make myself cliff dive, zipline, go on ropes courses, and ride roller coasters. I think because I can do those things people underestimate my fear. I drove for hours on a serpentine road with a several thousand foot drop off on my side of the road. Yosemite is confused as to what guard rails are for. They were few and far between, and the ones that were there were on the straightaways. The turns had nothing. NOTHING! The worst part is I had to buy a 7-day pass ($30!) to go through the park. I’m going to pretend it was a charitable donation so they can afford more guard rails!

Going up and down these mountain roads, I had trouble controlling my breathing and thought I was going to throw up. I thought about pulling over to one of the shoulder/vistas but knew if I stopped I wouldn’t be able to start again. I actually toyed with the idea of waving someone down to drive me. Sadly I get anxious when I’m the passenger in a car so I don’t think it would have helped much. I honestly thought I was going to freeze in the middle of the road. I wanted to get out and take a picture of the road from the top so people would understand my plight, but as I mentioned I probably would have quit driving and lived at the top of the mountain for the rest of my life. No joke, this was rough on me.

Once the worst was over I did pull over and got some great pictures. I even walked down to the clearest lake I’ve ever seen.

One fun thing that happened was the inflation of a snack bag. I guess the elevation caused the bag to expand. I bought this little thing from the UFO gas station and when I finally went to eat it, it seemed like a fully inflated balloon.

Next I cruised on over to Lee Vining, CA for lunch. You might know Lee Vining as the place where no one actually lives. This busy metropolis boasted a population of 222 in 2010 and it does not appear to have grown. I highly recommend looking at the interesting demographics of this town. The town holds one same-sex married couple, not a single African American, 56 people under the age of 18, and 9 people living in non-institutionalized group quarters. There are as many people in my office suite as there are male householders with no wife present in the entire town. This is the kind of place where movies like Children of the Corn or Troll 2 occur.

I stopped in Lee Vining because I was aware of some penny smashing machines in town. The plan was to grab lunch but honestly I was too queasy to actually eat. There were two places in the area with penny machines, Nicely’s Restaurant and Whoa Nellie Deli. Wanting to get away from that horrid park, I hit Nellie’s since it was directly in front of me and skipped Nicely’s. They are sweet pennies though.

Mono Lake is called a soda lake! My kind of body of water. Sadly it’s not actually soda…false advertising. Soda lake means the water is on the alkaline side of the pH scale. It’s still a cool place with a weird ecosystem based on brine shrimp with no native fish.

Just past Mono Lake was my next sight,  a roller coaster road! Since I couldn’t find an address for this, I was worried I wouldn’t be able to find it. It doesn’t have an official designation, so there were no signs for “Roller Coaster Road.” It’s a five mile stretch with a lot of quick hills and dips. I didn’t take the picture below because I was too busy driving. Most of it was tame but some of the drops were fun at 60mph.

Surprisingly the roller coaster road made my stomach feel better. I was more relaxed and drove on to my hotel for an early check in. Before I talk about the motel though, I want to mention the three places I visited after check in. The first being the 100+ year old cemetery sharing the Clown Motel’s parking lot. Among its residents are 14 victims of the 2/23/1911 mine fire and several others who fell victim to the 1902 “Tonopah plague.” I’m not sure what that is but it doesn’t sound good.

After this cemetery, I went to see Goldfield, NV. It once was a mining town, then a ghost town, then a tourist ghost town attraction. Now most of the souvenir shops are for sale and it’s becoming a tourism ghost town. Weird. It also hosts a kick-ass cemetery! At the entrance to the necropolis was one of my favorite finds. Even in death, this lady seems to be considered an outlaw. In a small jail is the grave of a former brothel madame.

This next grave had me giggling. I like to think “Biceps” last name is Park and Mosher is his occupation. He professionally went to punk concerts bashing into people in a circle pit.

Then there’s this poor guy, cut down on the job. Who knew grave digging was so dangerous? 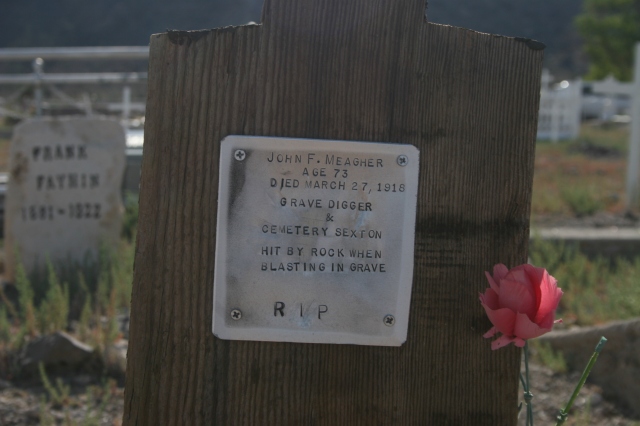 Below are several more graves with interesting deaths and job titles. 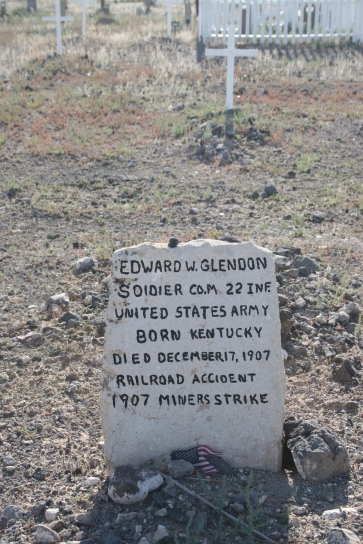 I also found these crazy plots. Though hard to see, the one has a kind of chalk board that claims he was a confederate soldier who also fought in the Indian Wars and Spanish American War. 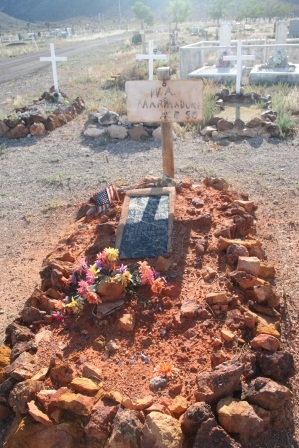 I have four more graves to highlight. Obviously it’s horrible on many levels that this boy died young, no one knew his age, and that he was simply identified as an Indian boy. Many of the graves mention pneumonia or cholera as a cause of death, especially with the infants. 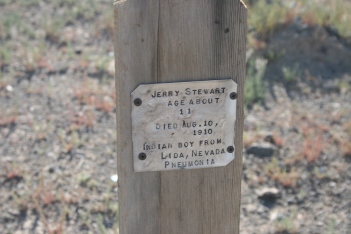 Next was this sad one. Many of the graves didn’t have names or dates on them but this one was just harsh. 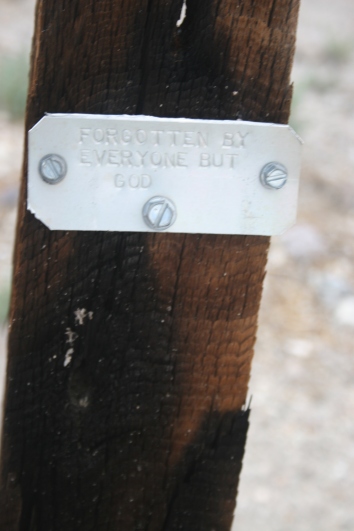 I’m guessing this next one was a suicide? Life became a burden…

To end my cemetery adventure on a high note, enjoy this grave of a man who loved beaver so much they stuck it to his headstone! Also that’s a camping mattress they laid on top.

From the cemetery I headed over to the International Car Forest of the Last Church. This is an exhibit of junk art created by artist Chad Sorg. He wanted to create a car forest at the end of the world and I’d say he succeeded. I actually went here against my better judgement. For a second time today, I felt extremely uncomfortable and in a potentially dangerous situation. I had to use Google maps to find this place and it listed all sorts of road names to take. There were trailers that looked lived in along these “roads” but were missing doors, windows, and walls. There were no street signs or mailboxes and I wouldn’t call what I was navigating roads. They weren’t even dirt roads. They were off-road paths at best. Google, you’re an ass.

This looked like the kind of place where people go missing. I had visions of being killed and stuffed in the trunk of one of the cars with my mummified body being found 10 months from now. When a large, black SUV pulled up I was certain death was imminent. Fortunately it was a very nice family that had similar fears! We laughed hesitantly and stayed close to each other. The art was fantastic and I made it out alive.

This one made me laugh. Does it look like Jeff Sessions to anyone else?

Through the day I saw all kinds of fun critters. I saw my first jack rabbit, which are larger and weirder than I thought. I also saw my first weasel! He scurried across the road in front of me. I also saw regular rabbits, chipmunks, and a little lizard. Fun!

Finally pictures of where I’ll be spending the night: the awesome Clown Motel. My favorite part is that my TV is an old school CRT TV with 22 channels. Well that’s my second favorite part, my first is that this is only costing me $43 for the night. I’m in room 109 in case anyone wants to save me. 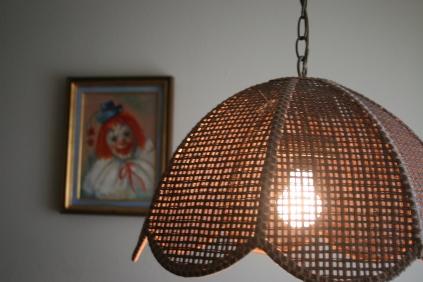 Let’s see if Vinny’s right and I die tonight or maybe wake up in a bath of ice with no kidneys. It has been a pleasure trying to amuse you with my blog.