Fact: Idaho = Potatoes. There’s no getting around it. That’s why, even though I love animals, I had to sacrifice feeding baby bears in order to get a true potato experience. My first two stops today exemplify the theme of this trip perfectly. I’ve now traveled thousands of miles to look at potatoes and clean things.

I feel like every welcome center at the border to Idaho should be a museum to potatoes. Strangely the official Idaho Potato Museum & Gifts is located deep into the state.

It was a pretty interesting place. There was nothing terribly riveting about the information it offered but some of the ad campaigns were fun. 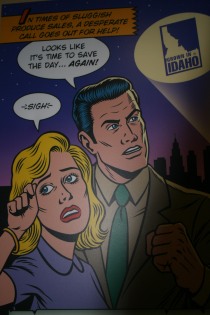 At the end of the tour, I talked with Norma. She’s the fantastic woman who works in the gift shop and gave me a $.50 discount on my ticket because of my AAA membership. She’s lived in Idaho all her life and seems pretty enthusiastic about potatoes. I gave her a toothbrush and she gave me a free box of potato stuff. 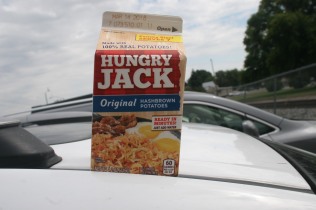 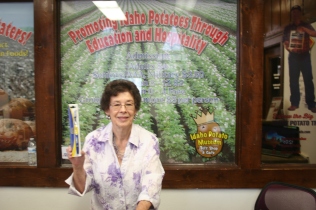 Not far from the potato museum is another museum I was very excited to go to. Just down the street is the Museum of Clean. It’s exactly what it sounds like, a museum highlighting cleaning products. I learned early on in my trip planning that you could test items at the museum. I was fairly certain this was actually an office building that I was paying to go in and clean with old vacuum cleaners and toxic, outdated cleaning sprays. What a great scam that would have been!

Fortunately for me, this was an actual museum. In fact it was much more than a silly tourist trap. Don Aslett worked his way through college by cleaning offices and homes. After attending Idaho State College, he turned his small job into a successful empire. Since then he has written books on topics like cleaning, reducing clutter, being a manager, and making your boss like you. I won a free DVD of him giving a speech on TV! I caught a clip and so far so good. I’m sorry many of the pictures are blurry, my camera was having issues. 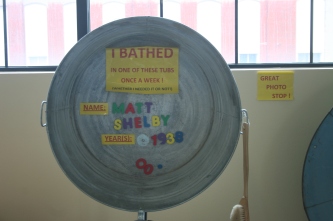 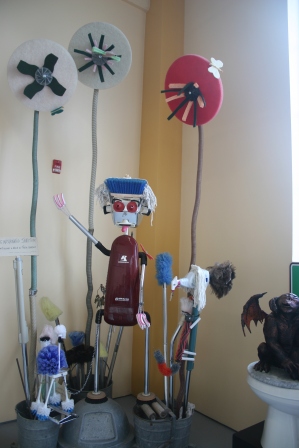 A favorite of mine was the only vacuum dinosaur in the world!

While they obviously keep it lighthearted at the museum, there is also a stress on educating patrons about environmentalism and good citizenship. The building even reclaims rainwater in pipes that run through the exhibits. Aslett believes keeping clean is what can save humankind. Clean bodies, clean minds, clean air, clean water, etc. It’s a wonderful message. Unfortunately Mr. Aslett was at a meeting when I arrived, but Brad the manager was informative and passionate about the museums message. Obviously such a great guy gets a toothbrush! I’m so sorry you came out blurry, Brad! 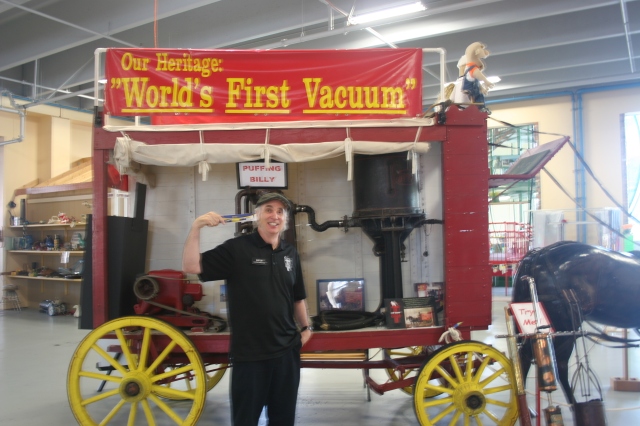 Another 2 hours and I found myself at the Shoshone Falls near Twin Falls, ID. Forty five feet taller than Niagara but lacking the tacky and fun atmosphere located on the Canadian side of the Niagara border. I love that place! Shoshone Falls, you would be so much cooler if you had dinosaur mini-golf. I didn’t take any pictures of the falls. If you want to see some Google image search it, I’m sure pro photographers have taken better pictures than I ever could. I will share a picture of my new penny though.

I wasn’t able to get a geocache in Montana. All the places I stopped seemed devoid of them. I did get this guy in Minnesota yesterday though and forgot to share him. He has a travel bug that allows people to track him. Many travel bugs have goals and this guy wants to see fire stations and eventually Ground Zero. He started in Alabama and I plan to take him to DE/NJ. That should get him pretty close. 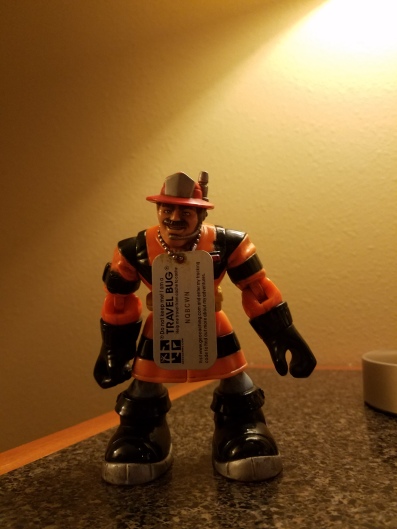 Today was fun but had a tinge of sadness for me. Someone I cared very deeply for was driving across the country in 2012 and had an accident in Idaho. Sadly she was ejected from the car and died a week later. As if it wasn’t already on my mind, my Facebook memory reminder was a picture of her at Jack Kerouac’s grave that I took 8 years ago today. She was taking me on a road trip to Canada for my 30th birthday. Bummer. Thanks for being an inappropriate ass, Facebook.

Tonight I’ll try to focus on tomorrow’s reunion with another friend who I’ve known for 24+ years! For the next 3 nights I’ll be with my buddy Howard. I’ll probably be taking a break from the blog so don’t fear if it doesn’t get updated until the 31st. Howard has always helped me make bad decisions, but he also seems intent on keeping me alive. Just in case, send lawyers, guns, and money!

2 thoughts on “Day 8: What I say is that, if a fellow really likes potatoes, he must be a pretty decent sort of fellow. – AAM”