Today was my longest day of driving. I started in Fergus Falls, MN and ended in Bozeman, MT. Early in the day I got to see the wood chipper from Fargo. Sitting in my room, I feel like I’ve been passed through it. Originally this part of my trip was split into 2 days, but for the sake of spending an extra day with my friend Howard, I decided I could drive 15 hours through some of God’s most boring scenery.

Because there is so much empty space in this area of the country, people decided to fill it with giant statues. My agenda for the day was to see these giant statues and appreciate them in all of their splendor. My first stop in the morning was to see Otto the Big Otter. He’s 40 feet long, built in 1972 by high school students for their town’s centennial, and made of concrete covered metal. Of course he is located in Otter Tail County, MN. Where else would he be? 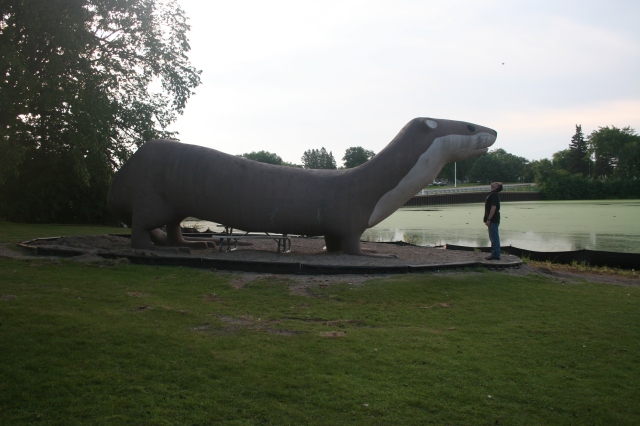 I found the bird population in Otto’s park a little off putting. There were hoards of geese and seagulls and they were all mixed together doing bird stuff. I’m not sure I’ve ever seen that many of those two birds in cohabitation. Even worse when I walked down to the water there were these two birds taking over an island! Herons and egrets? To Hitchcockian for me, I booked it. 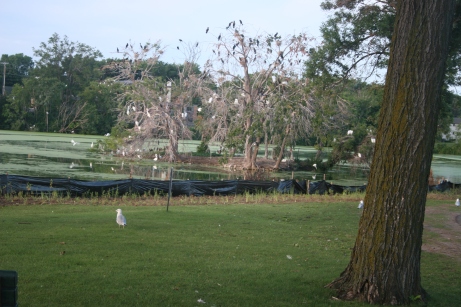 Less than half an hour away, I pulled up to the World’s Largest Booming Prairie Chicken located in Rothsay, MN. Created in 1976 for America’s bicentennial, it stands at 13 feet high and weighs 9,000 lbs. Apparently you have to create a large animal statue to celebrate 100 year anniversaries in this part of the world. For those not in the know, booming is when a prairie chicken inflates orange air sacs on their neck for mating reasons. 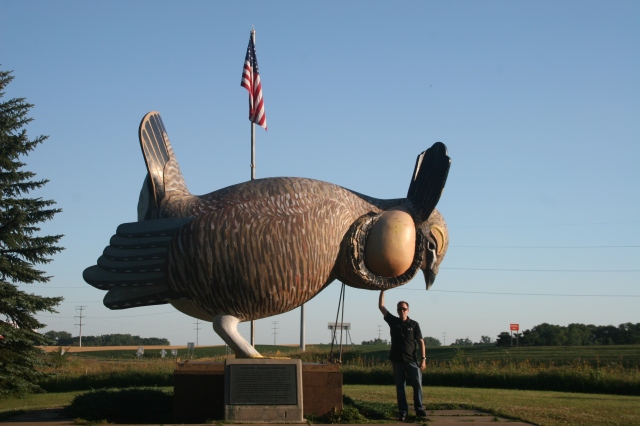 For America’s tricentennial I suggest they insert actual air sacs in the statue that can be activated by the push of a button. Add some flare to this old bird.

The next stop, as mentioned, is the wood chipper from Fargo. 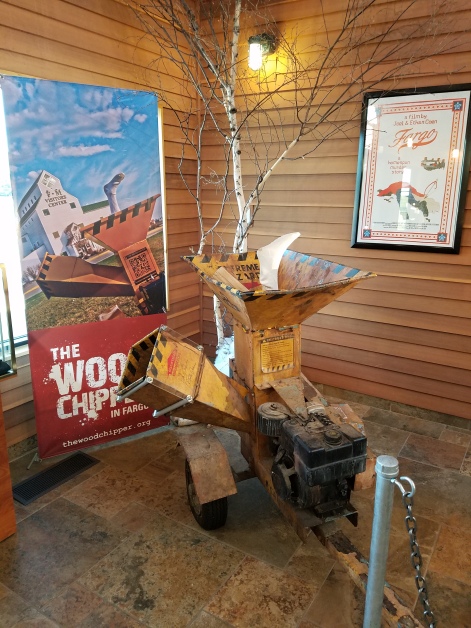 Otters, chickens, and now buffalo. This is also the first statue of the day not made to commemorate a centennial mark. My favorite thing about this statue are two lines from its Wikipedia page. “The statue is a significant tourist draw for Jamestown…” and “For many years, it was customary for members of the graduating class of Jamestown High School to paint the genitalia in school colors of blue and white.” At 26ft tall, 46ft long, and weighing 60 tons, it is an impressive sculpture. That being said, I can’t believe it draws a “significant” amount of tourism, even when its genitalia are brightly blazed. 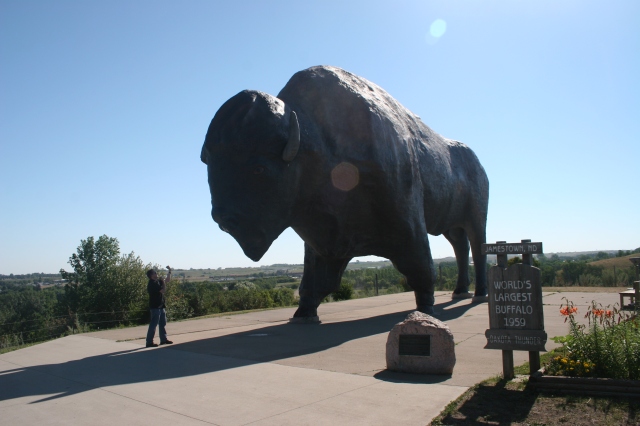 Ten years ago Jamestown was given a grant of $16,500 to refurbish the buffalo. Seven years ago it was given a name, Dakota Thunder, that was received after 3,500 suggestions were submitted. In 2010 the population of Jamestown was 15,427 (fewer people than the undergraduate student body at the University of Delaware). That is a surprisingly large number of submissions for that population. Maybe a lot of the suggestions came from the “significant” number of tourists drawn to the statue.

Just next door is the apropos National Buffalo Museum where I got two fantastic pennies! 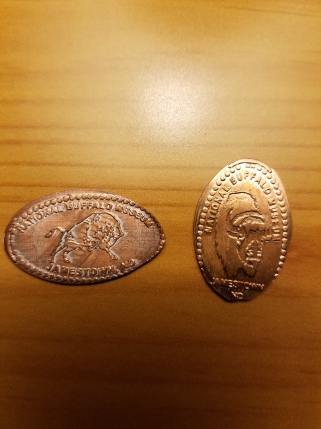 Moving along, I came to a statue created by students at United Tribes Technical College celebrating thunderbird mythology. It is located on the Missouri River and made for a beautiful stop. This statue is pretty awesome and when I get home I plan to look into the four thunderbird myths it represents. 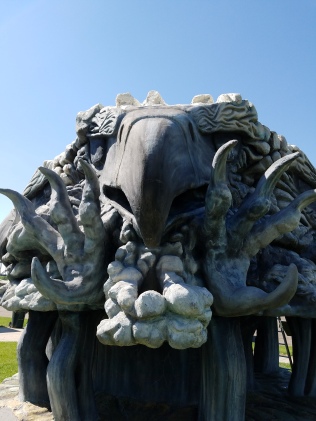 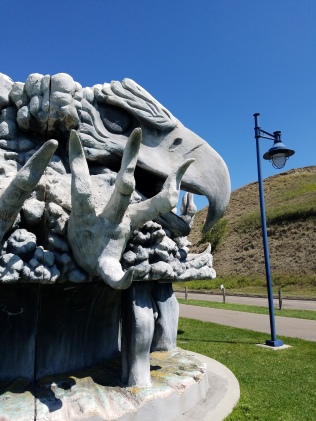 For lunch I stopped at the Space Aliens Grill & Bar. Google says it is 1,199 miles from my motel in Roswell, NM where I will most likely be eating other alien themed meals. Where Roswell focuses on the infamous UFO crash, it appears this restaurant was actually opened by aliens. I appreciate their take on life. “It makes no difference to us if you’re an Earthling or Space Alien.” 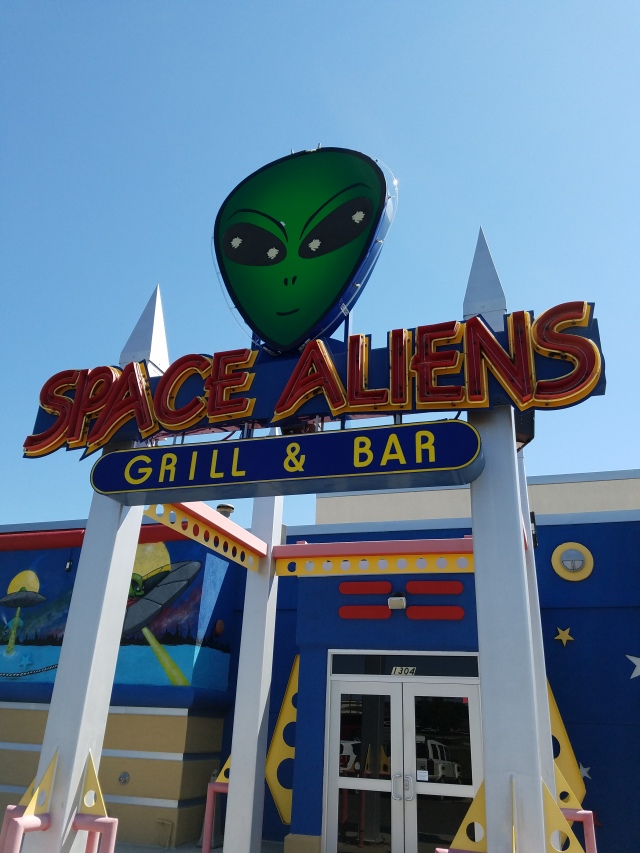 I’m bending my rule on not eating at chain restaurants. It’s a small, local chain with three different locations. I feel small, local chains don’t harm the spirit of my rule. If you disagree, screw you. It’s my rule and I’ll break it if I want.

Up next was the Enchanted Highway. As I think I’ve stated in previous posts, the conception of this trip began on the floor of my mother’s hospital room. The month she spent in different hospitals after her brain surgery was stressful. Planning this trip was a way to keep myself occupied and sane while she was asleep. I was looking at an email from Roadtripper.com which featured an article on the Enchanted Highway one day and as a joke, I started planning a trip to see it and some spots I knew of along the way. I never thought this would actually amount to anything.

During my woolgathering, I realized it was about half way to my friend Howard, so my fictitious trip was extended to see him. I decided it would be silly to turn around and take the same route home, so I planned a route through the south. Weeks turned to months and day dreams into obsessions. Two years later and I got to see what started it all. Thanks Roadtripper for your weekly newsletter! These things were enormous and I followed a bus tour of old people from one to the other. The one sculpture I couldn’t get to for a picture, I could see a mile away on the highway. 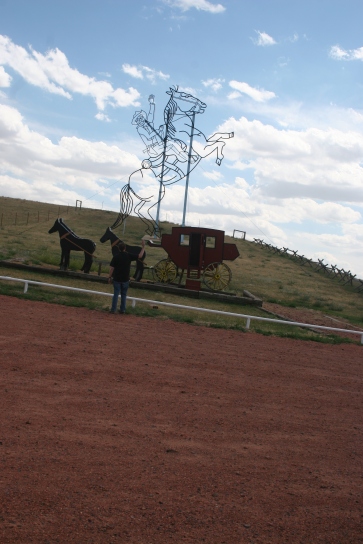 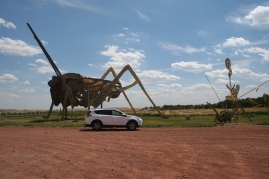 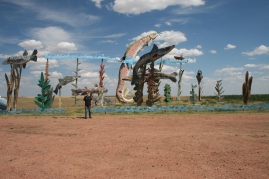 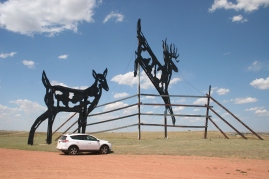 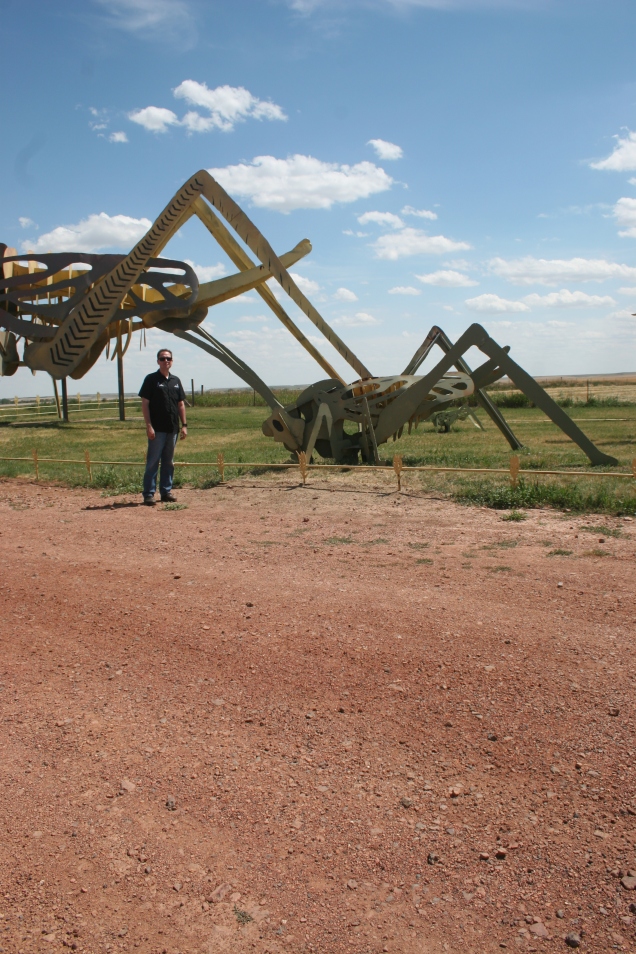 Rather than me telling you the brief history of the highway, I’m just going to link the Wiki page. It is interesting to note that the highway has no number. That totally feels like the setup to a horror movie.

My drive through Montana was awesome! For a long time on Rt 12, I was all alone. I didn’t see any cars, farms, houses, or stores. I did see a tumbleweed! No joke! There was nothing else. Except cows. Cows are everywhere. At one point, I drove by a sign that welcomed me to beef country. Later I saw what looked like the Delaware City refinery but with cows up against the parking lot. Sadly driving quickly down the road, I found this guy. There were no fences around, no farm…I have no clue where he came from or how he got to the side of the road. I’d never seen anything like this on the side of any highway.

It was cool to watch the landscape change from farms to prairies to Rocky mountains. So many miles later though and I ended up in my sweet room in the Royal 7. This place is exactly what a motel should look like. It has a blinking, neon sign with some of the letters burned out. It’s so fantastic.

Bozeman, MT looks like a really fun town! The bars and restaurants look really modern and fancy. I’d love to go out but I’m too tired. Strangely there are a lot of hipster types staying at the Royal 7. There are a lot of beards and skinny jeans around. Not what I usually see at my motels.

Thankfully tomorrow is a much shorter day. I plan to sleep in tomorrow and leave the motel around 8:00am. I’m very excited about the museums I’ll be seeing tomorrow. So much so that I’m wearing my tacky, tourist shirt with all stamps and old time postcards on it. Fantastic.

5 thoughts on “Day 7: And I guess that was your accomplice in the wood chipper.”

Tales from the mouth of a wolf