After 4 great nights in Wisconsin, I move on. I wish I could get paid to drive around and see all these silly places. I could easily spend a month exploring Wisconsin and all its weirdness. To be honest though, I was getting a bit itchy to move on. All of this driving is tiring but suits me. The plan for today was to make it to the west side of Minnesota. It’s been several years since I’ve been to Minnesota and I’m happy to be back for the day.

Before I left there were 2 more places in Wisconsin I needed to visit. The first was the Fiberglass Statue Mold Yard in Sparta. The Fiberglass Animals, Shapes, & Trademarks (FAST) company makes fiberglass statues and themed water slides. Basically they make everything good in life. The yard is where they stash the molds used to make their larger-than-life sculptures.

I wanted to creep further into the yard as I saw a whale and fish mold that I wanted to explore but I chickened out. There were some guys working hard and I felt like a jackass taking stupid pictures of me interacting with the abandoned molds. That didn’t stop me from acting like jackass around the perimeter where they couldn’t see me though! Click to enlarge.

I’m still bitter about the Hodag. It was after the FAST yard that I was going to head north to meet the crazy bastard. If that town would really sell the Hodag I bet they could make some major tourism bucks. Hundreds of places make money on Sasquatch. This place would have a monopoly on the Hodag and reap all the benefits! Their loss.

Instead of crypto-zoological animals, I went out for lunch in a mine shaft! I dined at the Wausau Mine Co. to be exact. Designed to look like a mine/cave it was a fun little place. It was pretty busy for a Tuesday but my waitress was fantastic and the food was quick. Fun fact: a man was allegedly murdered in a booth and now haunts the place.

Let it be known, they sat me at the table directly under the No Dumping sign….

The menu itself seemed confused. I figured it would be a burger place and to an extent it was. It had a burger/sandwich section, an Italian section, a Mexican section, and a specialty pizza section. I got the special of the day, which was a solid chimichanga. To wash it down I got “The Shaft,” their signature drink. It had alcohol but really just tasted like sugar and pineapple. I prefer Cristian’s mojitos. 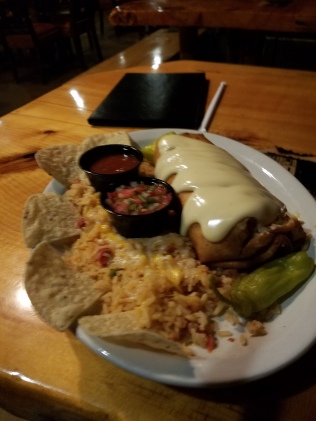 Next I made a very difficult visit to Minneapolis. Like Milwaukee it seemed every street I needed to get to was under construction. On top of that my GPS started acting slowly and a sudden downfall hit (my first of 3 today). It was frustrating getting into the city and just as difficult to get out. But it was totally worth it. I got two fantastic pennies at Sex World! A store that sells…well I’m sure you can guess. The cool thing about these pennies is that they have impressions on both side!

There are two questions I can predict I will be asked with relative certainty. If I tell someone I’m webbed toed, 8 out of 10 times I will be asked if it makes me a good swimmer. It doesn’t. When I told people I was circumnavigating the U.S. to see unique and odd attractions, most immediately asked if I was going to see the largest ball of twine. Originally I wasn’t going to but I felt pressured. The last change I made to my itinerary was to add a ball of twine.

There is actually some controversy in the ball of twine world. The current largest ball is in Cawker City, KS however it was not created by a single person. Frank Steober began it and was doing well but then passed away. Since then the town has continued to add twine in an annual Twine-A-Thon, making this a large group effort. James Frank Kotera (he claims he’s the famous JFK people talk about) currently holds the record for ball created by a sole ballmaster (as they are called). It weights over 22,000lbs and is located in Lake Nebagamon, WI.

So technically I visited the 2nd largest ball created by a sole ballmaster, weighing over 17,000lbs. Located in Darwin, MN, Francis Johnson was the original ball of twine guy. He began rolling his ball in 1950 for a reason no one knows, and continued until his death in 1979 of emphysema. The town assumes it was thirty years of twine dust that killed him. Murdered by his passion, may we all be so lucky. While he is no longer the record holder, he was the OG of twine. I’m happy his is the one I could visit. It is also the location of a geocache, so I’ve added Minnesota to my list!

Two hours later and I made a quick stop at the Big Chief Cafe which is just across the street from the continental divide marker. I’m officially on the other half of the country! Suck it, east coast chumps!

Now it’s time to settle into the Fergus Falls’ Super 8. I left the Dells at 7am and arrived here at 9pm. With the exception of my 45 minute lunch, I’ve been on the move. I was able to listen to the entire Tina Fey Bossy Pants audiobook. For the record it was uneven. I really enjoyed some parts while others seemed condescending and preachy.

Tomorrow is the longest day of my trip so I need my rest. I’m going to drive completely across North Dakota and most of Montana. To end the post, here’s Weird Al singing about the ball of twine I saw today.

4 thoughts on “Day 6: Dad, we wanna see the biggest ball of twine in Minnesota. – WAY”