Most people would say I threw a lot of money away today. They’re probably right, but screw them, it’s my money. Almost all of the attractions I went to today were $5 + tax, but it adds up. Fortunately I was very busy, had loads of fun, and walked many, many miles. I also finally ate well! So here’s how my day went.

My first stop was going to be Paul Bunyan’s Cook Shanty for an all-I-can eat cholesterol  laden extravaganza! I’ve heard the food is okay, they have a penny machine, and best of all, they have a lumberjack show! When I showed up however, the line to get in was easily 100 people outside of the door. I’m going to try and wake up earlier tomorrow. Hopefully a Monday morning won’t be as busy.

Dejected but close to a few places, I drove over to the Ghost Outpost and Lost Temple, two tourist traps apparently owned by the same people. Though I’m a haunted house guy by trade, I decided to check out The Lost Temple first. Sadly I was told no photos inside. 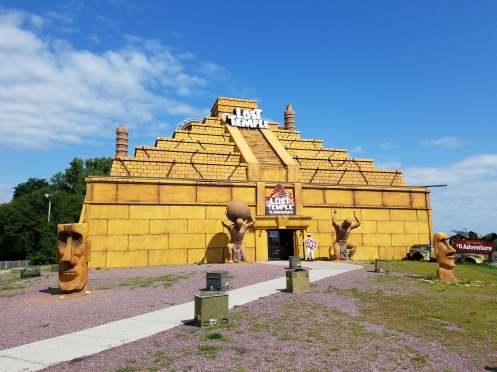 Basically it consisted of dimly lit halls decorated to look like pyramids or jungles. There was an explorer character in a pith helmet that appeared in several displays. Towards the end an animatronic version was in a head-hunters pot making puns about them inviting him for dinner. A lot of the machines seemed broken. Mouths wouldn’t move and spiders didn’t jump. The absolute best part however, was at the very end. I turned a corner and two skeletons were sitting at a small card table playing STREET FIGHTER CLUE! I’m 100% certain that’s what the game was, but I can’t find any reference to it existing on the internet. I may have to go back and sneak a photo.

Next I took my chances at the Ghost Outpost. It was essentially Lost Temple but with ghosts and dungeons instead of cannibals and pyramids.

The lady inside was much nicer and told me to take all the pictures I wanted. To be honest, it was weak and there were only two things worth taking pictures of. One was a zombie retching and randomly throwing up water. The sounds were great. The other is the heart. It’s cute someone wrote this on the wall in black light paint, but what’s with the green tears? Are those tears?

After I dropped my car off at the motel, I walked up to the main strip to look for food. Following the theme of this trip, my last minute unplanned excursion paid off! I had one of the greatest lunches ever. The service was fantastic and the food was even better. I saw the menu for the High Rock Cafe on it’s door and thought it sounded good. The fresh strawberry themed specials also sounded amazing. Having barely eaten in the last few days I ordered two appetizers and a lunch (I have a fridge right now for leftovers!).

First a thank you to Shane! He was a great guy who consistently checked on me and gave me recommendations. When my Diet Coke was low, he took care of me. Of course he earned a University of Delaware toothbrush! If you ever find yourself in the Dells go to the High Rock, request him as your server, and tip big! 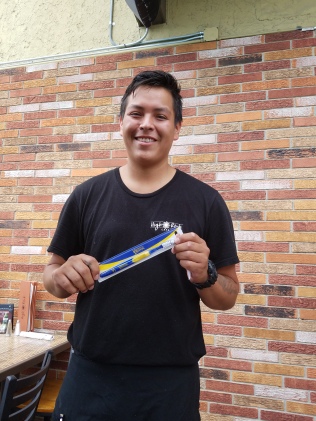 The appetizers I ordered were pork potstickers with sweet chili orange marmalade. The salad with the marmalade and orange chunks was delicious. But that was nothing compared to the “Gilly Goat.” Warm goat cheese, roasted garlic, diced peppers, and house made pepper-olive tapanade served with rustic bread. Holy crap that was amazing. That dish is high on the list of answers for the “if you could only eat one food for the rest of your life…” question. And because I’m a fatty pants, I followed these up with The Patch Grilled Cheese. Creamy brie cheese, bacon, and a house made strawberry chili jam between roasted garlic panini bread. Surrounded by tourists wanting burger joints and candy stores, this place deserves better.

I walked the leftovers back to my room and then headed to The Haunted Mansion, the Dells other scary trap. It relied heavily on projectors and TVs. The production value was higher than the Ghost Outpost but it was smaller. Either way, both were fun but forgettable.

There was one more fun house attraction to check out. Off the main highway coming into town is Top Secret! the upside down house. The structure is probably bigger than the other three attractions combined, but the inside is deceptively small. It’s modeled after an upturned White House and has statues of George W. Bush inside the entrance. I don’t think I saw any other president… 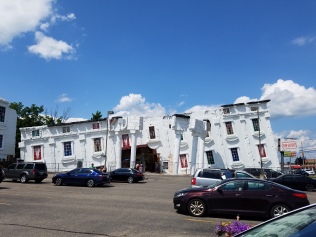 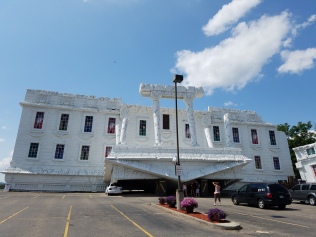 Most of the exhibit was just room after upside down room including the Oval Office. A little further into the building you start going down large air shafts by giant crates similar to the ones at the end of Raiders of the Lost Ark.

At the very end of the walk was an alien room with a display of Roswellian visitors in refrigerator boxes and a jail cell with Bigfoot. Because how else would you end a visit to an upside down White House?

My last adventure for the day, before going to a make-your-own Mongolian Grill, was the famous Dells Duck tour. They are constantly driving up and down Broadway. They have a sales window every block and a pickup every other block. I figured I had to do it. I think we have these in Philly, it’s a tour in an amphibious vehicle that is a 50/50 land/Wisconsin River tour.

Fun fact, we used these in WWII and the Korean Conflict. It makes sense they would be called duck because they’re amphibious, but it’s actually from an acronym.

My driver was a nice guy named Jacob. He did a great job entertaining us through the trip. He told us all about Blackhawk Gorge named after the famous Native American Chief Gorge, father of Boy Gorge who had a monkey, Curious Gorge. Jacob couldn’t remember the Chief’s daughter’s name but said she was Gorgeous. His delivery is better than my writing. Anyway he did a great job so he earned a toothbrush and place on the blog!

I feel this post wasn’t as exciting as my first three so I’ll leave you with a present. Here are two small clips I managed to record off my CB. Enjoy trucker chatter, I’ll try to get you more.

4 thoughts on “Day 4: A little nonsense now and then is relished by the wisest man. – RD”