Two years in planning and here we go! I thought today would be dull because I only had 3 stops planned. Being so close to home, I’ve already seen many of the junk yard sculptures, Jello and Hershey museums, ringing rocks, and various other local tourist traps. Having grown up in Ohio, the OH, PA, DE area is old hat to me. But this was actually a great start! There were a few failures but overall, the day exceeded my expectations.

My first stop wasn’t glamorous. I made a quick run into the Pennsylvania state capital building for one of my favorite souvenirs. I got there at 8:00am and expected people arriving at work. My car was the only one out front. As I wandered the large and beautiful capital building I saw a total of 5 people. Two of those people were the police at the door. At 8:00am on my first day of vacation, I got frisked!

After getting felt up, I explained my trip to the officers and why I was at the capital. The one officer laughed and asked me questions. He gave me directions and said goodbye when I finally left. His partner, the one who searched me, was not having it. He was not interested and only spoke to tell me to lift my hands. 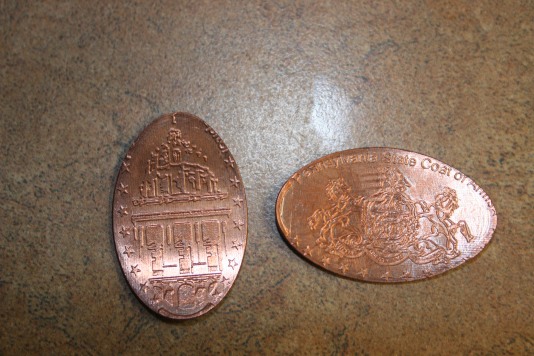 Shortly after leaving the capital my iPod died for good. It’s a decade old but I liked the way it organized my music. Now I’m relying on my phone.

For lunch I dropped by Dr. Doolitte’s Roadside Cafe and Creamery.

I had heard it was a mini-golf, petting zoo (down to 4 goats), ice cream place. I’ve been to plenty of places like this but I always have fun. They had everything I hoped for….

Bigfoot with a dinosaur.

And this hotdog guy slathering himself in ketchup. 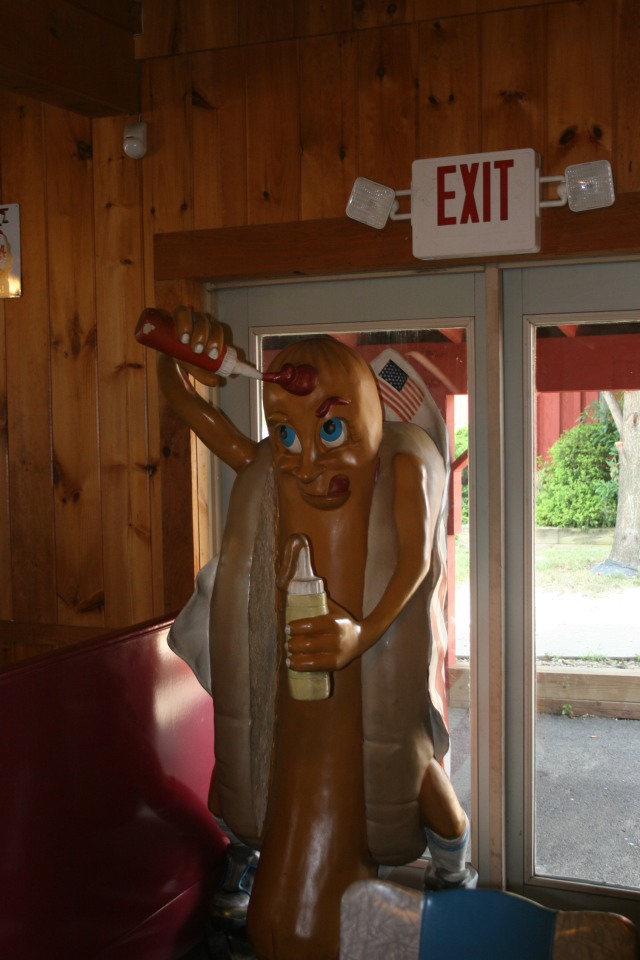 Outside is where the real adventure started. I was the only one stupid enough to play the outdoor mini-golf course in the baking sun (my face is tan/burned now!). Every one else played at the inside course. Fortunately this was an amazing decision. Not only did I see and fight dinosaurs…

I met John. Notice the University of Delaware toothbrushes he earned. 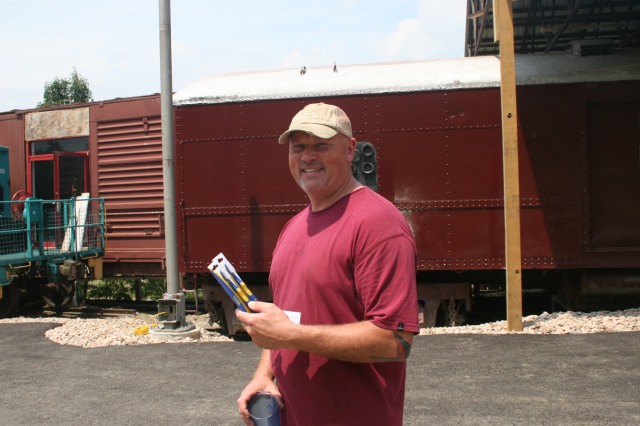 John was doing construction work and saw me playing mini-golf by myself and taking pictures with the dinos. After a while he shouted down “Are you playing golf or taking pictures.” I then explained my trip and my blog, so he offered me a tour of all the old train cars and explained the plans for expansion here. Dr. Doolittle’s had a lot more depth than I thought.

The actual Dr. Doolittle is a surgeon. John, his girlfriend, and the good Doctor have vision! They are transforming the cars into a bed and breakfast, bar, and craft beer brewery! At the main entrance I had chicken fingers on a roll…little did I know in the restaurant in the back I could have had duck-fat fries! Also in the restaurant is the very first electric chandelier in Pennsylvania.

They’ve started really dressing up a lot of the cars. This section is well hidden from the road, well behind the tacky entrance and surrounds dino mini-golf.

John was the idea man behind creating a brewery and that’s what he was working on when I arrived. All of the materials for the place are recycled and put together by John and his crew. Obviously the decommissioned trains are recycled, but the corrugated metal is from his father’s farm, and the bar and tables are made of the remains of a bowling alley the doctor owned.

John has also made great strides to create the car where the brewing will occur as well as the refrigerated car. 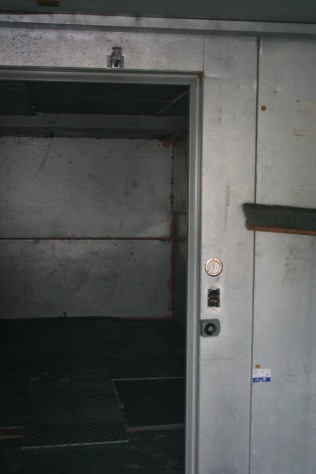 Remember this is all a work in progress. They’re hoping to have a lot of it done by fall.

Along with the B&B cars, bar, and brewery, there are plans for play and camp cars for kids. There is also a car being converted by volunteers for the local model train club. 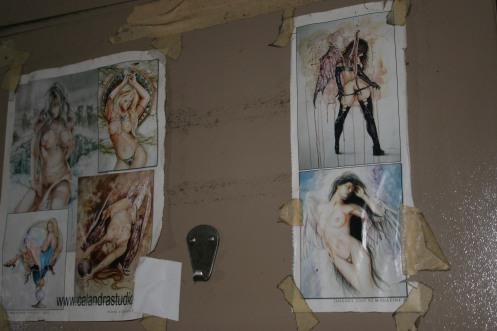 Entire families lived on these trains. Below is a picture of a poster left up in a young girl’s room.

The trains are very plain but have great B&B decals on them. Shortly after purchasing the trains however, the doctor was informed by a lawyer that all B&B markings had to be removed within 60 days! How weak! Greatest show on Earth my ass!

What I thought was going to be a silly stop and short mini-golf game (I did get a hole in 1!) turned into an hour and a half educational lesson on trains and history! I saw the fancy cars where each room had a bed and toilet. Everything was made of an extinct Cuban wood. And they hosted all kinds of celebs and dignitaries. I can’t wait to return in the fall to see John’s completed work.

My drive through Pennsylvania was great! I was up in the mountains and everything was green. I saw a strange sign that said “I heart Botox parties” near state college. I stopped at a gas station that sold live bait, bongs, and had slot machines. It even had interesting graffiti on the dirty but nice smelling bathroom mirror.

Ohio sucked (sorry Ohio family). First the Welcome Center was closed…and this traveler almost wet himself after planning a pee break there. Next the penny machines are a full $1.00! I’m use to paying $.51. And the machines are automatic! You don’t get the satisfaction of turning the crank to flatten them yourself. The only good thing is one has Lemmy Kilmister on it. Honest that’s him, I’m too lazy to try and take a better picture right now.

I also picked up these Ohio themed ones.

The one good thing about the Ohio Turnpike are the truckers! My CB radio usage was more successful this time. Things I learned from the trucker chatter:

My final stop was suppose to be dinner at Tony Packo’s Hot Dog Bun Museum! Opened during the Great Depression with a $100 loan, the restaurant originally offered only sandwiches and ice cream. Quickly the “sausage and sauce” sandwich took off and the Packo family was able to purchase their building. Rather than follow the trend of hanging autographed pictures on the walls, Tony Packo’s hangs autographed hot dog buns on the wall. It began in the 70’s with a signed bun from Burt freaking Reynolds! The first dinner on my trip was to be where The Bandit once ate!

Sadly when I arrived the place was packed. It also looked nothing like I expected. It looked like an Applebees or other casual dining experience but with a large gift shop. At that point I had been driving 12 hours and was too tired to wait in such a long line. Plus I didn’t want to be scrunched in a line because I probably smelled…

My first hotel is a Red Roof Inn. These places always remind me of my dad. He moved to Delaware a year before my mom and I. During the week he stayed at the Red Roof Inn and commuted home on weekends. As far as budget hotels go, I’ve stayed in much worse places. The place is a bit sketchy though. There is a puppy pen on the other side of the building. It’s a little fenced in area, about a 5ft circle, filled with puppy pitbulls. Also there is a Bennigans down the road. I didn’t know they still existed.

My room is nice enough, especially since I’m so tired. It has a king size bed, so I got that going for me. I hope this post had enough content-to-picture ratio. I’m super tired and feel I relied a lot on photos. Either way, plan your trip to Dr. Doolittle’s in the fall. Stay in a ritzy train room and drink all of John’s beer. I have another long day tomorrow full of other silly adventures so I better get some sleep! Goodnight! 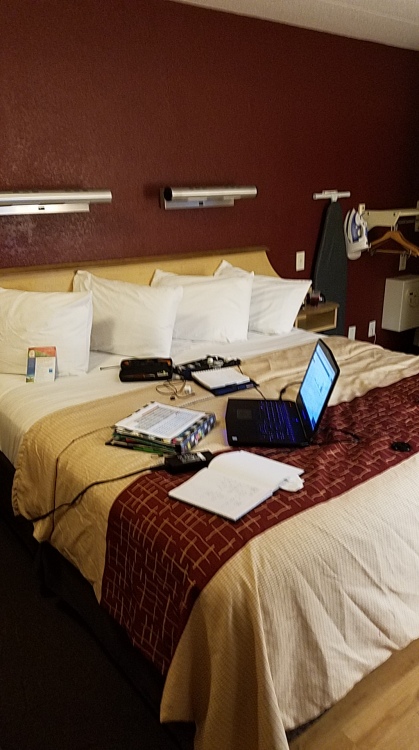 8 thoughts on “Day 1: Sometimes the light at the end of the tunnel is a train. – CB”