The only thing about this trip that should be taken seriously is my dedication to its planning and execution but even that shouldn’t be taken too seriously. To keep in the theme of tacky, silly, and ridiculous, my planning binder is embarrassingly childish. I’ve also spent way too much money on supplies for it. I’m just now starting to assemble the different pieces and wanted to share some of my gear and recent purchases.

The white and black checker pattern on mine is reminiscent of The Specials. Just looking at it makes me want to skank. If you aren’t familiar with skanking please enjoy this video. Also watch this video as the gentleman adds juggling to his skanking. Like so many things on the internet, my favorite part of the 1st video is the comment section. People apparently have strong opinions of what skanking is and is not. The 2nd video has strangely positive comments. Maybe the hat in video 2 inspires more love than the mask in video 1?

Anyway I’m getting away from my binder and how RAD it is. Rad dog. Awesome. My biggest disappointment with the trapper keeper is the quality of the three rings inside. It’s weak plastic and the slide to open and close it doesn’t function well. A friend of mine mentioned this was common of trapper keepers. They weren’t meant to last as long or work as well as a three ring binder found in an office. Makes sense as they probably get traded out each year as a student ages and trends change. It’s also too small for all of the folders and items I want to put into it. I might need to buy a separate accounting journal for some of my notes rather than fill space with ledger paper.

When I found the keeper it held some wonderful items inside! The first thing I saw upon opening was a two sided, cardboard sheet with useful information. If I’m correct, nearly every trapper keeper or student binder came with these. They had great info that would have been useful on tests. It showed all the states and capitals and broke down different measurements and conversions. Seeing as how teachers always made you clear off your desk, the reference cards were useless. When I was little there was no internet to check facts for me. That being said I still never used these reference cards. I’m happy it’s still in there as it adds to the nostalgia of the t-keeper.

There were also two folders inside. These were strange as they didn’t open, instead they had a slit in the side for sliding papers in and out. I can’t see these being practical as you can’t open them and sift through the papers easily. It doesn’t matter though, like most kids my papers got jammed in the front of the keeper or just directly into my backpack. Trapper keepers were more for image than organization. To make up for their weak filing ability, these folders offered great planning sections on the outside.

I have a reoccurring nightmare that I return to school after spring break and can’t remember my class schedule or locker combination. I just wander the halls in terrified confusion. I’ve had this nightmare since high school but fortunately it has not yet appeared in 2017. Not sure what the nightmare means, however if I had these folders in my dreams I’d be set. I’d be a dream warrior where my Freddy Kruger is the inability to remember any skill or fact not referenced in over a week.

Only one folder had a class schedule on it and it’s left me with several questions. How old was I? I only had four classes? Surely there had to be more such as writing, geography, or history. What the hell was Special!? I swear, I was mostly in honors classes. Academically I’ve always done fairly well (although my writing might not reflect it). Not that there is anything wrong with special ed, I just wasn’t in it. So what was my second period special class?

The planning calendar taking up the last two thirds of the page seems useless. Was I suppose to buy a different folder for each month or should I just write my assignment and test schedules in #2 pencil to be erased later? School is roughly 9 months of the year, multiply it by the 4 classes and I would need 36 folders. I imagine these folders came with the t-keeper but I doubt they gave me 36. The little boxes are too small to write anything meaningful anyway. Mead was setting me up with a mediocre organizational system at best.

Riding the wave of nostalgia I decided I needed new folders for the binder. I spent two weeks looking for vintage folders on eBay, Etsy, and various office supply stores. I went to drug stores, Kmart, Walmart, and Toys R Us looking for anything that looked appropriate. I spent two weeks on this. Two weeks. I ended up with several purchases and spent way too much money. Yet still I regret nothing.

The biggest and most expensive purchase were Garfield folders. I am 100% positive I owned some of these when I was little but have no idea where they went. I remember having a Garfield bookmark saying “Warning: This book is protected by an attack cat.” Said bookmark was stolen out of my gym locker with a Stephen King book I was too young to read anyway. I’ll never know for sure who swiped it but the prime suspect was a portly kid named Kenny.

This post is full of weird tangents. Anyway, it’s not that I was ever obsessed with Garfield, it’s just that his cartoon, books, folders, and posters were a major part of the zeitgeist for ’80s youth. If anything I’m more interested in Garfield now because of the wonderful Garfield minus Garfield website.

There were several Garfield folders on eBay and I bought the largest lot I found. For $30 I ended up with 6 classy, three-hole binder friendly folders. That is one sassy cat. If only there were a folder expressing a hatred of Mondays…

For significantly less money ($8), I got a sealed, limited edition package of Willow folders! Holy crap, I feel like this was a major score! I loved Willow when I was younger. When it comes to George Lucas films, to me Val Kilmer’s Madmartigan is a better lovable-scoundrel than Han Solo. Go to hell if you have a problem with that. These folders were part of an offer from Ziploc. I’m not sure what the tie in was but this was a common thing in the ’80s. Send box tops or UPC codes with shipping and handling money and a company would send you swag that had nothing to do with their products. 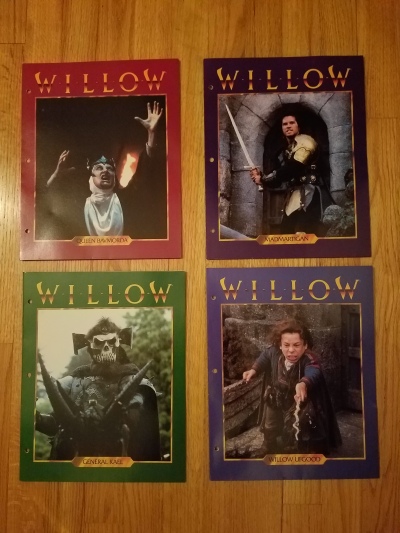 Speaking of Lucas films, an interesting fact about the actor who played General Kael is that he also played three characters killed by Indiana Jones.

The final folder I bought is simply an alien riding around on a flying saucer. I’m having slight buyers remorse about this one. It’s a fun folder but not really meaningful to me. I also paid $6 for it, making it the most expensive in the bunch. I don’t hate it, I’m just not sure what I was thinking when I bought it.

A purchase I’m extremely happy to have made is a set of 10 plastic sheets, each consisting of 20 little pockets. It’s advertised as a storage device for memory cards but for me, this is a useful way to store and transport the many smashed pennies I hope to collect on the trip. Unlike sheets designed specifically for coin collections, these have little flaps over each pocket to keep the contents from spilling out. I’m torn. Part of me hopes I can fill every sheet on my trip and another part says that’s crazy. Two hundred smashed pennies will cost me $102. That’s not bad for 200 souvenirs but it is a significant amount of cash/coins.

The Ziploc/Lucasfilm lettering on the bottom is actually on one of the Willow folders. I placed the sheet on the folder to make it easier to see.

Raiding my basement and making several impulse buys at office supply stores has left me with the items featured below. Hopefully some of it will be useful over the next few weeks as I attempt to assemble parts of the t-keeper. 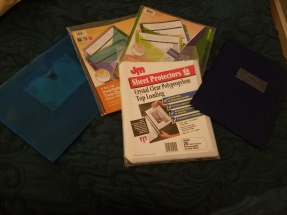 In the spirit of nostalgia, I’ll end this post with two videos and another piece of weird trivia. The first video is the intro to the “Garfield and Friends” cartoon. The second is the opening to the Garfield ripoff “Heathcliff.” For my money “Heathcliff” was the better cartoon and had a better intro. And the weird info: the deceased voice actor Lorenzo Music was the voice of Garfield in the 1988 cartoon. He was also the voice of Dr. Peter Venkman in the fantastic “The Real Ghostbusters” cartoon (now streaming on Netflix!). As everyone knows, Dr. Venkman was played by Bill Murray in the “Ghostbusters” movie. Murray would go on to voice Garfield in the 2004 movie. What a weird career crossover these two had. Enjoy the videos!

2 thoughts on “I don’t want to wait, for my trapper keeper to be over! – Cartman”