Recently a friend returned from a 2.5 year trip abroad. He spent time in Africa serving in the Peace Corps and then time in Europe with his wonderful, German fiance that he met during his service. Before he left he was my roommate for 4 years. Tyler, his brother, and I are as close as family can be. Tyler helped take care of my father in his final years and was even at the bedside with us when my dad passed. It’s no wonder that when I picked him up at JFK airport our conversations picked up right where they left off. I was forced to take this unflattering picture for his family to prove I picked him up. Apparently they thought I was going to forget or leave him in NY?

Of course we filled caught up on all the changes in our lives. A lot has happened for each of us in the past 2.5 years. We probably had enough to tell each other for a week’s worth of discussions however we fell right back into talking about comic books and Star Wars. More important than the health of my mom or the details of his future marriage and the immigration issues it entails were our opinions of Episode VII and Rogue One. It’s amazing how in a close friendship, no matter how long you’re apart, you can just pick up where you left off. It’s like McDonald’s. I can go years without eating at one but when I do go back I still enjoy a Bic Mac.

Before Tyler split off to see his dad and brother, he spent a week at my house. I took half days all week for exciting adventures! Below are pictures and descriptions of our exploits. We had a great time and hopefully when his fiance makes it to America we can have a few more adventures to show her how great the USA is! I’m trying to talk them into meeting me at one stop on my trip!

Our lunch consisted of burgers and shakes. I also had a hot dog. He also had cheese fries. A solid, American junk food meal, and we ate it all with our hands smelling like gun powder. Before lunch we went to the shooting range across the street from Jake’s Wayback Burgers. It was the first time Tyler shot a gun and he did well! It was a busy, expensive day, even with the use of a Groupon. We shot 50 .45, 50 .38 spl, 100 9mm, 10 12 gauge and so very many .22s between our two lanes. Total we used 6 different firearms. 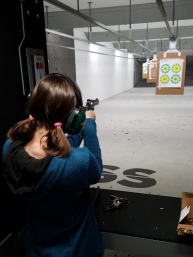 Before we left, we had a friendly competition. We each claimed one of the 4 small targets to see who did best with 20 rounds. We all did amazing and I’m pretty proud of my results (lower left corner). The pistol held 10 rounds so we each reloaded once. If you notice I have 10 holes around the outside as I got use to firing this gun (I had fired 5 others of different calibers before this, including a shotgun). Once I was use to the gun? I direct your attention to those 5 holes in the red.

That afternoon we played board games that followed our exciting and hazardous theme. Tyler introduced me to Pandemic, a game where the goal is to eliminate diseases/viruses that are infecting the world. Sadly his copy of the game was in German, so I’m not sure I can remember all the details of it. We also played a game set in the French Revolution where the point is to decapitate people. Each person is worth a different amount of points and you want to behead as many high point individuals as you can.

Day 2: Tone down the machismo.

For lunch we headed over to the British Bell Tea Room where I ordered Afternoon Tea. With this package you get a pot o’ tea, a scone, clotted cream, lemon curd, preserves, 6 mini-tea sandwiches, and some Petit Fours. It never looks like that much food but I always leave uncomfortably stuffed. In fact we went to Outback that night and I could only eat a cup of soup. I didn’t really want the soup but I felt like a jerk if I didn’t order something.

At tea, I stuffed my face with dill cream cheese and cucumber, poppy seed chicken salad, and roast beef & swiss sandwiches. I washed it all down with an amazing Assam Satrupa black tea, alternating each cup with and without cream. The scone of the day was orange, walnut and it was by far the greatest scone I’ve ever had. Tyler had some kind of savory crepes. I’m not sure what tea he ordered, but he did enjoy it!

After tea we decided to check out Second & Charles, Tyler’s favorite store, to stock up on DVDs. We also passed by the mall to check out the Lego store. While at the mall, in keeping with the theme from lunch, we stopped at Bath and Body Works so I could pick up some smelly inserts for my office. Tuesday lacked the danger aspects of Monday. 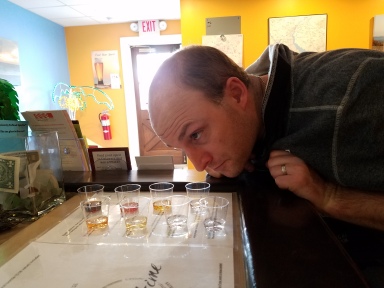 Redeeming another Groupon we headed to the beach! I had a deal for a rum tasting which seemed like an excellent idea. Sadly it didn’t go as well as we’d hoped. I enjoy rum but I didn’t like these rums. The lady next to me agreed that most were too strong. They lacked the taste or rum; there were no hints of the sweetness of the sugarcane. Two of the rums did have flavors added but they were also too strong. The Java rum was overwhelmed by the faux taste of coffee and the plum was sickeningly saccharine. The tasting came with a free bottle to take home. I’m not a fan of gin but that’s what I ultimately decided on. It had a mellow taste with citrus added. I plan to pour it over lemon water ice this summer.

Near to the distillery is the Cape May – Lewis ferry. I had a line on a penny smasher in their gift shop so we headed over. Like any beach town off-season, the area was dead. The parking lot was empty and I’m not sure the ferry was even in service. We walked into the main area and there wasn’t a soul in sight. Off to the left was the “arcade” consisting of a handful of aged machines with their sounds and bells making the only noise. We went down the hall to the right towards the gift shop and dining area. We were surprised by an eerie scene when we stepped out of the hall. A woman at the cash register didn’t acknowledge us as she stared out across the water in a stupor. Every table in the the dining room was full of silent, ancient people playing board games and doing puzzles. I’m not sure what games as I didn’t get close. I wanted to snap a picture but I was afraid it would rouse them from their trances. It was like a zombie movie where the main character is surrounded by the undead who haven’t noticed him and the slightest sound would grab their attention and incur a feeding frenzy. I smashed my damn pennies and got the hell out of there!

On the way home we stopped at Captain Blue Hen comics for new comic Wednesday. They had a t-shirt on hold for Tyler. They loved the fact that he ordered it from Africa months/years ago. After taking his payment they thanked him for his service. Those people are awesome. If you’re ever in Delaware stop by. I might be biased, but I’m pretty sure it’s the best comic store in the universe.

On his 4th day in the states, Tyler headed over to see his mom and step-dad. There he showed them his pictures from the multitude of countries he was able to see. There were pictures of safaris in Africa followed by snowy scenes in Finland. He had a great adventure! I popped by their house after work to pick him up and got to see many of the photos, the foreign money he has collected, and the kidney stone he had removed in Africa. Weird.

That night we met up with our friends for Quizo. This use to be a Thursday night tradition so it was cool we got to play. It was a mini-reunion in which we took 2nd place and a $25 gift certificate. Next time he’s in town we’re going to win!