Netflix has some quality, original content. What started as a DVD rental company has grown into a TV/Movie channel in it’s own right and I’m pretty happy about that. Everyone who watches Stranger Things loves it. Everyone. It’s a fact. I have charts. I’ve recently watched Brazilian made 3% and was completely engrossed in it’s story. Most recently though, I’ve watched The Fundamentals of Caring. In fact I watched it three times over the past weekend. 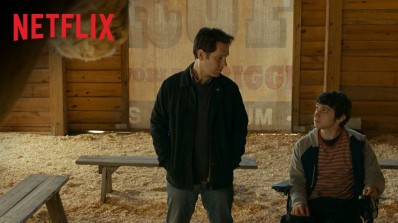 I’m not typically a guy who will watch a movie repeatedly in short succession but I enjoyed this movie so much that I had to share it with a few people. I don’t think this movie is for everyone but for me it never lost it’s charm. At points the sentimentality seems a bit forced but I didn’t mind. It stars the always likable Paul Rudd and Welsh actor Craig Roberts. I recently learned about Roberts from an Amazon Prime show called Red Oaks (which I also recommend) and enjoy his subtle acting style as well.

Technically the movie isn’t really original content as it’s based on a novel by Jonathan Evison. According to Wikipedia the basic premise of the movie is: “Ben (Paul Rudd) is a retired writer, who lost his son three years ago, and whose wife is trying to divorce him, but he refuses to return the signed documents. Needing a new job, he takes a six-week course to become a caregiver. He gets a job from an English woman whose 18-year-old son Trevor (Craig Roberts) has Duchenne muscular dystrophy. Trevor is a sardonic, anxious boy with a fascination with American roadside attractions, and Ben suggests one day that they go to see some of them.” I’ve edited the description a little to remove spoilers.

The rapport between the characters is perfect, they work to playfully torture each other through the entire movie. As someone who’s humor is “there is no such thing as too soon and nothing is too sacred to make fun of” I loved the torture they put each other through. Not many people or movies would nonchalantly make fun of someone’s muscular dystrophy but this movie pulls it off. Some movies might make a joke to shock the audience but Paul Rudd’s character makes the joke so fast and lightly that isn’t jarring. It’s just plain funny. I want them to be my road trip partners.

Along the way they meet and collect other people. A runaway, played by Selina Gomez, a pregnant woman with no car, an asshole car dealership owner, and a father down on his luck either tag along on the trip or get pulled into the story at stops. These characters are more like props however, and never really get developed. Selina Gomez’s character in particular I didn’t enjoy. I understand the point of her but she was too underdeveloped to become such a main fixture. Her character came off more snotty than witty to me.

What makes this road trip movie extra special for me are the destinations. Yep, they seek out silly tourist traps that most people stop by as a fluke. To most people these stops are like impulse items at the front of a store. No one really goes to the store specifically for a candy bar, glasses repair kit, and chap stick, but when you see them while in line you pick them up. No one drives hundreds of miles to see the world’s large pie, anvil, pheasant, frying pan, etc. but you stop when you pass them. No one except people like Ben, Trevor and me!

Though I’ll be in the corner of the world those two, silly bastards drove around in, I won’t be stopping at the same attractions. It’s not that I don’t want to, it’s just that they’re a bit too out of the way to fit them in. Their stops include the world’s large cow, a two-story outhouse (it’s talked about but not actually seen), and the main destination, the world’s deepest pit. Their diet is just as solid as the destinations; diner waffles and french toast. Brilliant.

One thought on “Get ready for the most spectacular standing piss in human history.”